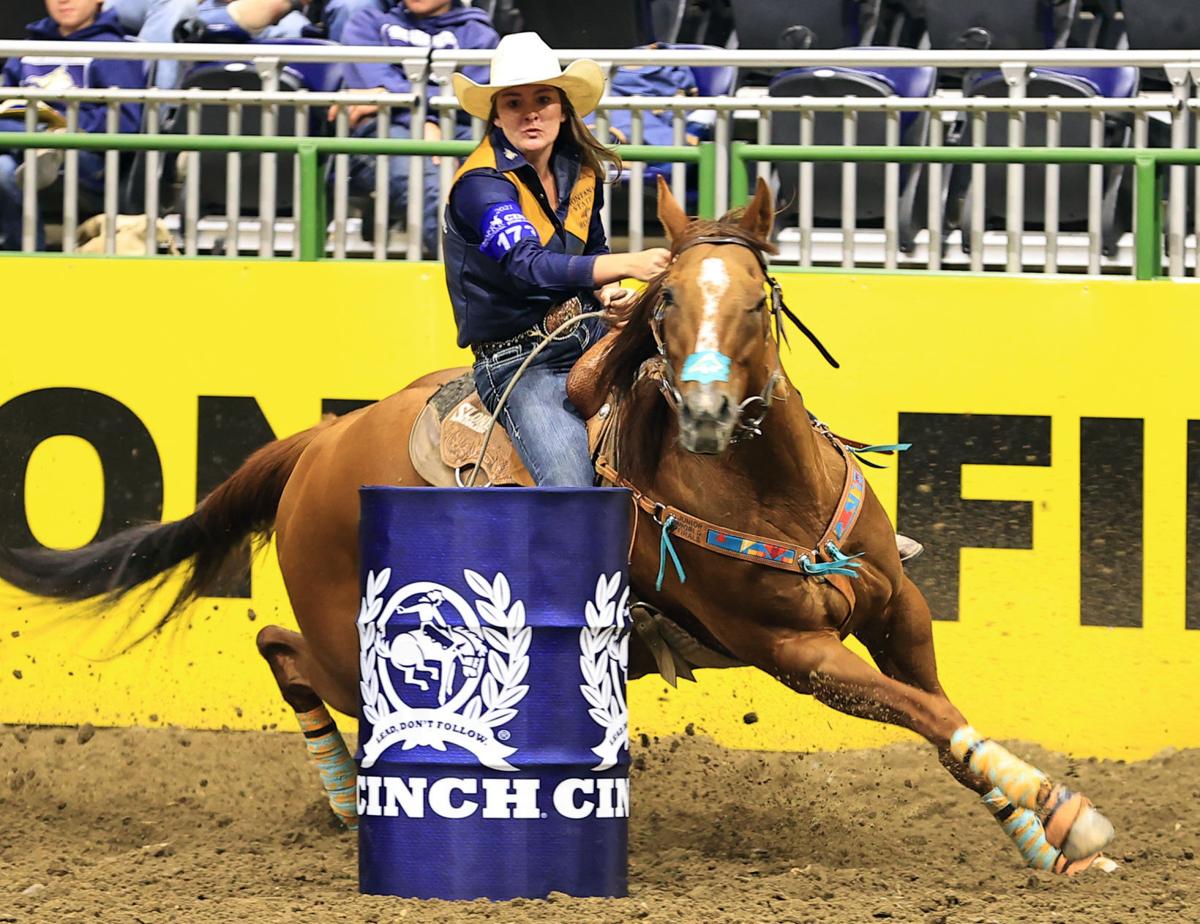 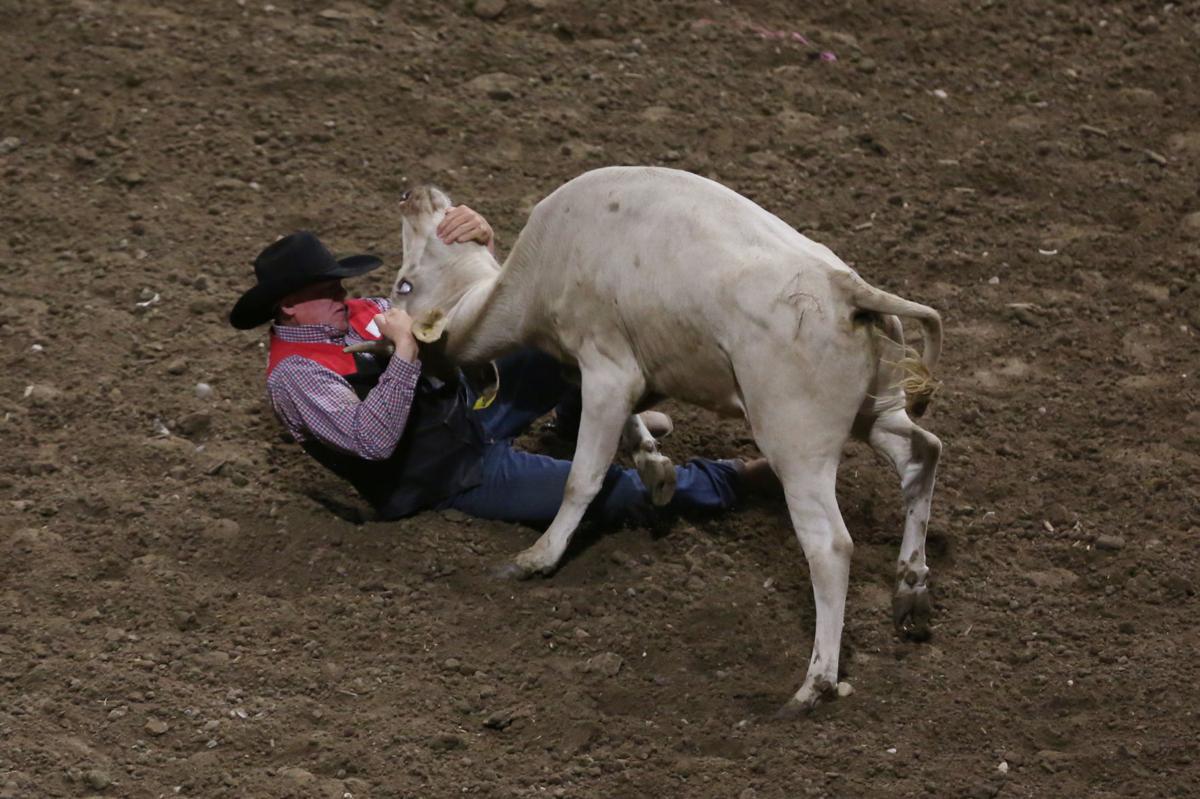 Bryce Harrison of University of Montana Western wrestles a steer at the College National Finals Rodeo at the Ford Wyoming Center in Casper on Thursday.

CASPER, Wyo. — The Montana State women's rodeo team increased its lead to more than 100 points Friday heading into the short go at the College National Finals Rodeo in the Ford Wyoming Center.

The Bobcats, with sophomore rookie Paige Rasmussen leading in goat tying and freshman Tayla Moeykens fourth in barrel racing, had 430 points to lead runner-up Southwestern Oklahoma State by 120. Dickinson State was third at 163 and Oklahoma State fourth with 160.

The MSU men, led by first-place Caleb Berquist in tie-down roping, were eighth with 295 points, well behind leader Clarenden College of Texas (565).

Rasmussen, of Belgrade, has scored 180 points on her own by finishing first in two of the three go-rounds and tied for third in her middle run. Goat tying teammate Lindsey Pulsipher of Oakley, Idaho, who is in 13th place, has contributed 85 points.

Moeykens, of Three Forks, has three-run time of 42.85 after posting a 14.10 on Friday night and has scored 160 points. She's just .15 behind leader Jaylie Matthews of East Mississippi State Community College. Dickinson State's Lakken Bice is second at 42.78 and Southwestern Oklahoma State's Sadie Wolaver is third at 42.82.

Fellow barrel racer Shai McDonald, a sophomore from Gardiner, is sixth and would add 50 points to the score but her time isn't counting toward the team total. McDonald's overall time is 43.08 and she will compete in the short go.

On the men's side, Berquist, a junior from LaCrosse, Washington, leads the tie-down roping by 3.1 seconds entering the short go with a 26.2 average for 190 points. With times of 8.8, 8.7 and 8.7 he's the only cowboy to finishing in under nine seconds in all three go-rounds.

Tie-down roping teammate Levi Delamarter, a junior from Longview, Washington, is in fifth place at 34.3 seconds and has provided MSU with 55 points.

Bobcat team ropers Teegan Leno, a freshman from Sheridan, Wyoming, and Jaret Whitman, a senior from Belgrade, are 13th and have scored 50 points. Steer wrestler Cody Faulkner, a junior from Gooding, Idaho, is 12th.

Olympian Tom Daley knits while watching in the stands in Tokyo

Olympian Tom Daley knits while watching in the stands in Tokyo

Montana and Montana State will have new protected rivals for the 2022-24 seasons in Big Sky Conference play.

Here is why some Big Sky Conference seniors elected to take the extra season of eligibility given to them as some are chasing titles and others are prepping for the next level.

Big Sky commissioner Tom Wistrcill breaks down the potential impacts of conference realignment, his concerns about Montana House Bill 112 and his thoughts on if the FCS should permanently move football to the spring.

Montana's football game at Eastern Washington will be televised on ESPNU.

Montana State athletics 'feel like we're back to normal,' but COVID-19 concerns linger

MSU sporting events will be at full capacity, and the school isn't requiring vaccines for its athletes.

Montana State had one of the youngest teams in the country last season.

Montana and Montana State combine for seven of the 30 players who land on the Big Sky preseason all-conference team.

Both the Grizzlies and Bobcats received first-place votes.

Bryce Harrison of University of Montana Western wrestles a steer at the College National Finals Rodeo at the Ford Wyoming Center in Casper on Thursday.