BOZEMAN — Sean Chambers has suffered three season-ending injuries and maintains two years of eligibility, all without using a medical redshirt.

The quarterback played a full 2021 season at Wyoming and led the Cowboys to a 6-2 record in 2019, a season cut short by a knee injury. Chambers, who initially committed to Rutgers, used his regular four-game redshirt in 2018 after breaking his right fibula in the fourth game.

Chambers broke his left fibula on the third play from scrimmage of Wyoming’s 2020 pandemic-postponed opener. The 6-foot-3, 225-pound dual-threat QB didn’t need a medical redshirt because the NCAA had granted athletes an extra season of eligibility that year due to COVID-19.

On Sunday, Chambers announced his commitment to Montana State, a team he helped beat in the 2021 opener with a last-minute touchdown drive. He played an injury-free season but struggled in Mountain West play and lost his starting job after seven games. Chambers entered the transfer portal last month.

Chambers talked to 406mtsports.com over the phone Tuesday from his hometown of Kerman, California. He discussed his injuries, the Football Championship Subdivision runner-up Bobcats and playing for Brent Vigen, who is MSU’s head coach and was Wyoming’s offensive coordinator from 2014-20.

NOTE: This Q&A has been edited for brevity and clarity.

406: First off, what were your main reasons for choosing MSU?

SC: Montana State has a good program, and I think they took a really, really big step forward this year in making it to the national championship. Played well on both sides of the ball, had a really good run going. When we played Montana State up in Wyoming, they put that on display in front of us. They gave us some fits on defense, and their offense took it to our defense.

With my relationship with Coach Vigs, it kind of seemed like it was the right place for me.

406: How would you describe your relationship with Vigen?

406: How would you describe him as a person and as a coach?

406: Did he reach out to you first to come here, or was that more your doing?

SC: It was kind of mutual. He saw me enter the transfer portal, and then we kind of reached out to each other and talked. Next thing you know, I'm going to Montana State.

406: What would you say your main goals are for when you get to MSU?

SC: I just want to, first of all, get to know my teammates and develop relationships with those guys and get into the program and mold myself into becoming a Bobcat.

406: Is being a starter your main goal right now, or is there something else?

SC: The main goal is to go in there and compete and help them anyway I can. That's kind of why I thought Montana State was a good fit for me because I see myself as a competitor and a team-first guy, and I would like to go in there and truly help the team out in any way I can. That's kind of the way I see myself going in there.

So I wouldn't say I'm going to expect to be the starter right away because that's just not reasonable. I know that they have good quarterbacks and that the quarterback room is pretty tight, and I just want to go in there and contribute in any way possible.

406: What are your thoughts on Tommy Mellott?

406: You’ll easily be the most veteran quarterback in that room unless they get another transfer, so I imagine that's what Vigen and the other coaches wanted from you, that veteran presence?

SC: Yeah, definitely. I’ve played some football games, I've been through the highs and lows of college football and I kind of know what to expect out there, so I guess I can provide a little bit of veteran assistance to that room.

406: Vigen and (offensive coordinator Taylor) Housewright have talked about how quarterback run is such an important part of their offense, so I imagine that you and Vigen both saw that as a good fit, being a mobile, dual-threat quarterback?

SC: Yeah, definitely. I love what Coach Housewright’s doing with the offense. Like I said, they came to Laramie this fall, it was kind of on display for me, just watching them play and stuff like that, so I love what they're doing. Watching the playoffs and watching those guys make a run, it was really evident what they wanted to do, and I think I can help with that.

406: I can guess the reasons you entered the portal, but can you say in your own words why you ended up choosing to transfer from Wyoming?

SC: I spent four seasons at Wyoming. Things were good and things were bad. I had three season-ending injuries there, and I just kind of felt like I needed a new home, a new environment, kind of a fresh start to finish out my college career.

406: Losing your starting job, I imagine, probably played some role?

SC: It had some role, but not entirely.

406: Was one of those three injuries worse than the others?

SC: I'd say the last one was the hardest one to go through. Physically, I think they're all about the same. You hurt it, it was painful and you’ve got rehab that you’ve got to go through. That sucks. But I'd say the last one, mentally, that was the toughest one. Coming off the canceled season and then getting our season reinstated again and then breaking my ankle, that broke my will a little bit and kind of sent me back down.

406: I’ve seen that photo of you on the cart in tears. It breaks my heart looking at it. Can you take me through what exactly was going through your mind in that moment?

406: I can't imagine the feeling of going through all that, breaking both fibulas. Did you feel snakebit?

406: I’ve seen the stories about how you thought about giving up football. Just to hear it again in your words, what got you to stick with this sport after going through all that?

SC: Being around a team, being with teammates, that helped a lot. I knew I loved football, and I knew I wasn’t done with football. I knew I had more to give, and that was kind of what got me through. I made a commitment to play my years of football, and I wanted to finish out that commitment, wherever that may be.

406: What did Vigen say to you during those moments of doubt?

SC: He just told me to keep going and put my head down and keep working. He always encouraged me to stay strong and stay tough and just stay me.

406: Was that message similar after the first two injuries?

SC: Yeah, it definitely was. I would say that he and his wife, Mrs. (Molly) Vigen, have just been a great help with those injuries, whether it's picking me up from surgeries or dropping me off at surgeries or just checking in on me. They've been fantastic and such a great help.

406: Losing the starting job and, I'm sure, not playing up to your standards (in 2021) was tough, but not having an injury, was it bittersweet? Was it just disappointing, or was there some hope, like, “Hey, I can get through a season without an injury”?

SC: It was bittersweet, for sure. I would love to have been on the field playing while not having a season-ending injury, but at this point in my career, that's a victory for me. I love that I was able to walk away from the season and still be standing. So that makes me happy more than anything.

406: How much do you think those injuries affected your play, if at all?

SC: I don't think that affected it any. Once you have a lot of injuries like that, you’ve just got to stay on it more often, you’ve got to stay in the training room more often.

The Ross family formed Bobcat ties in 2020, when Troy was stuck inside. 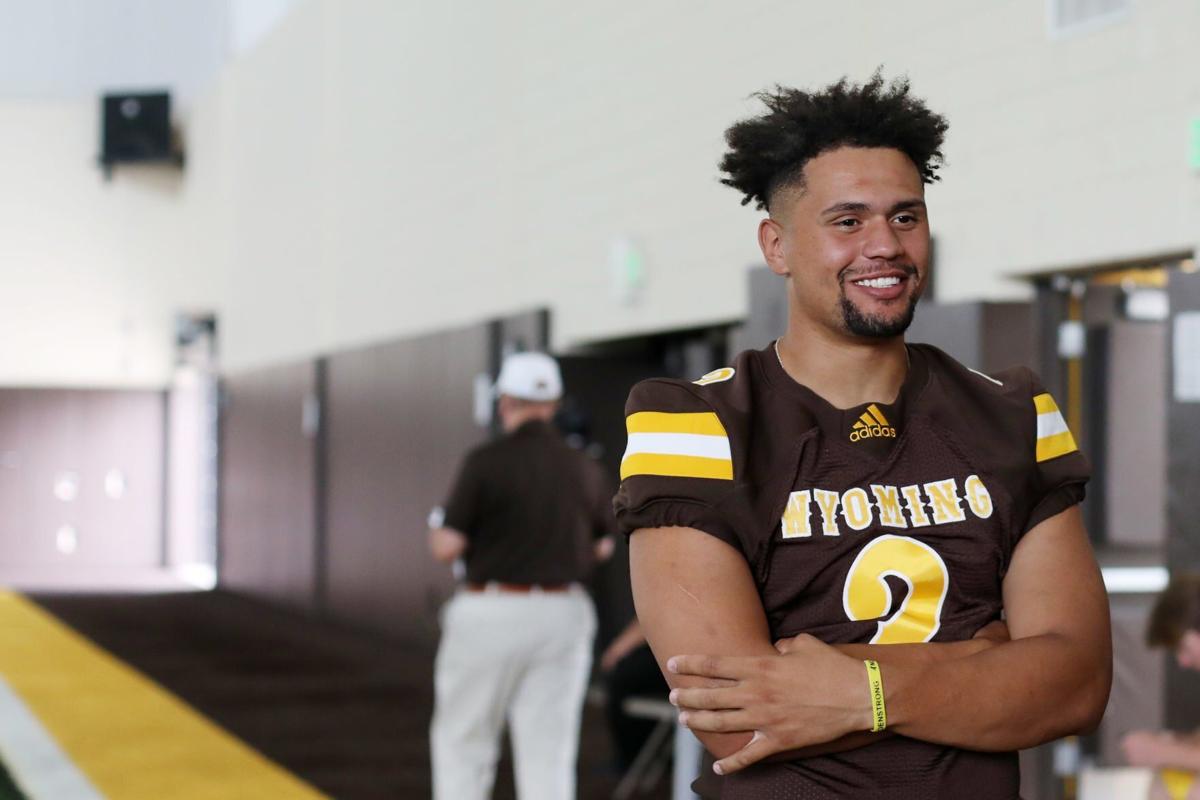 Wyoming quarterback Sean Chambers smiles as he talks with members of the media during Wyoming's Media Day on Aug. 6, 2021 in Laramie, Wyo. 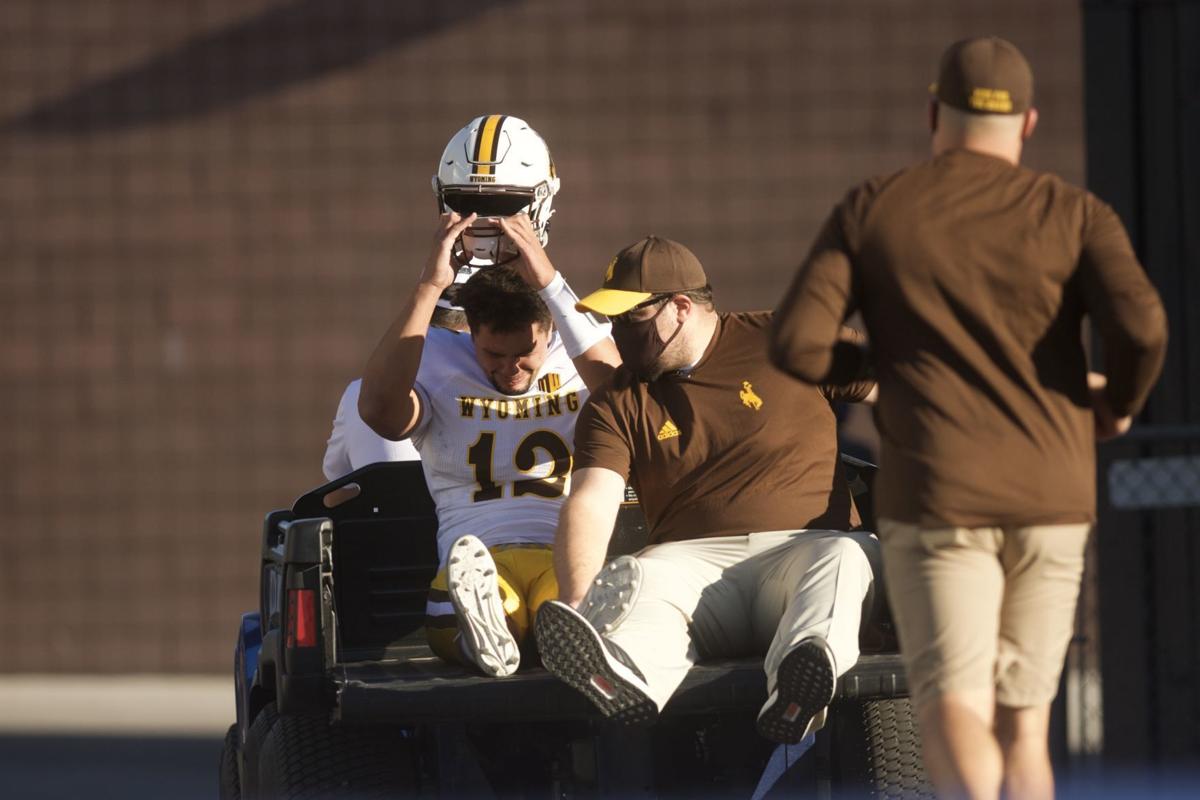 Wyoming quarterback Sean Chambers reacts as he is carted off the field after suffering a leg injury early in the Cowboys' game against Nevada in 2020 at Mackay Stadium in Reno, Nev. 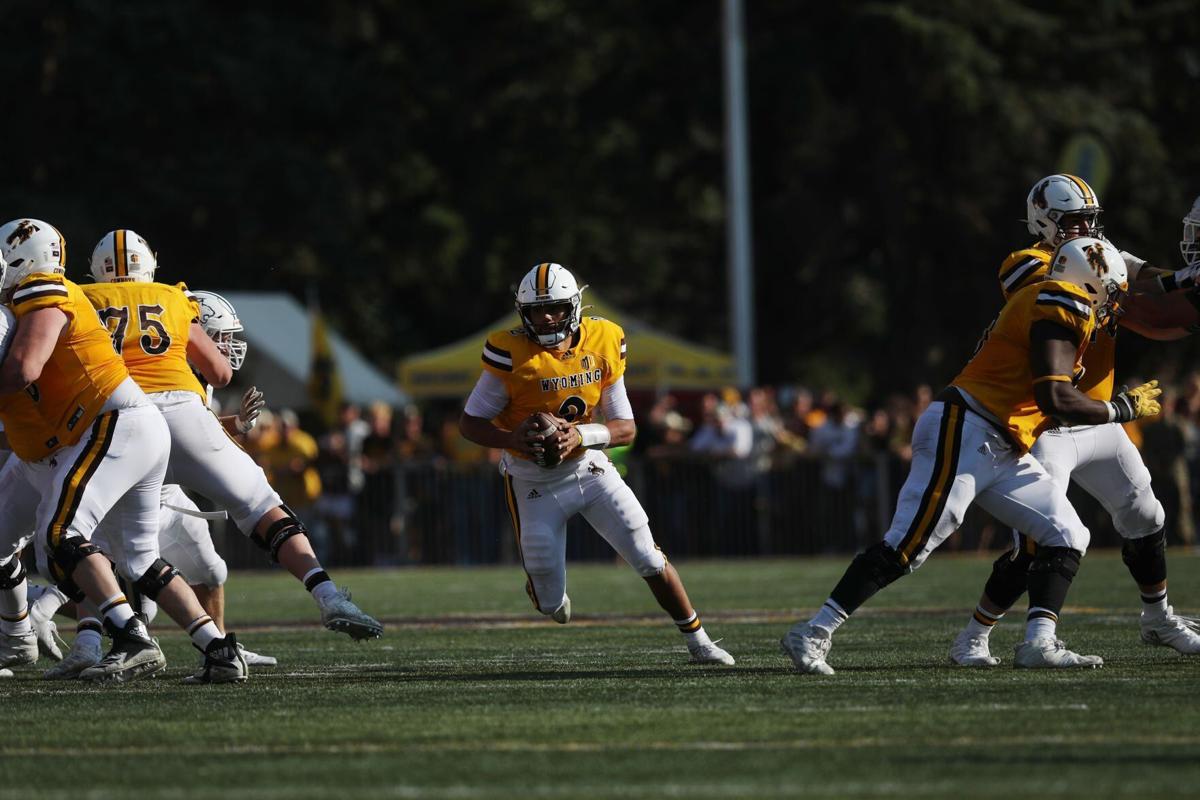 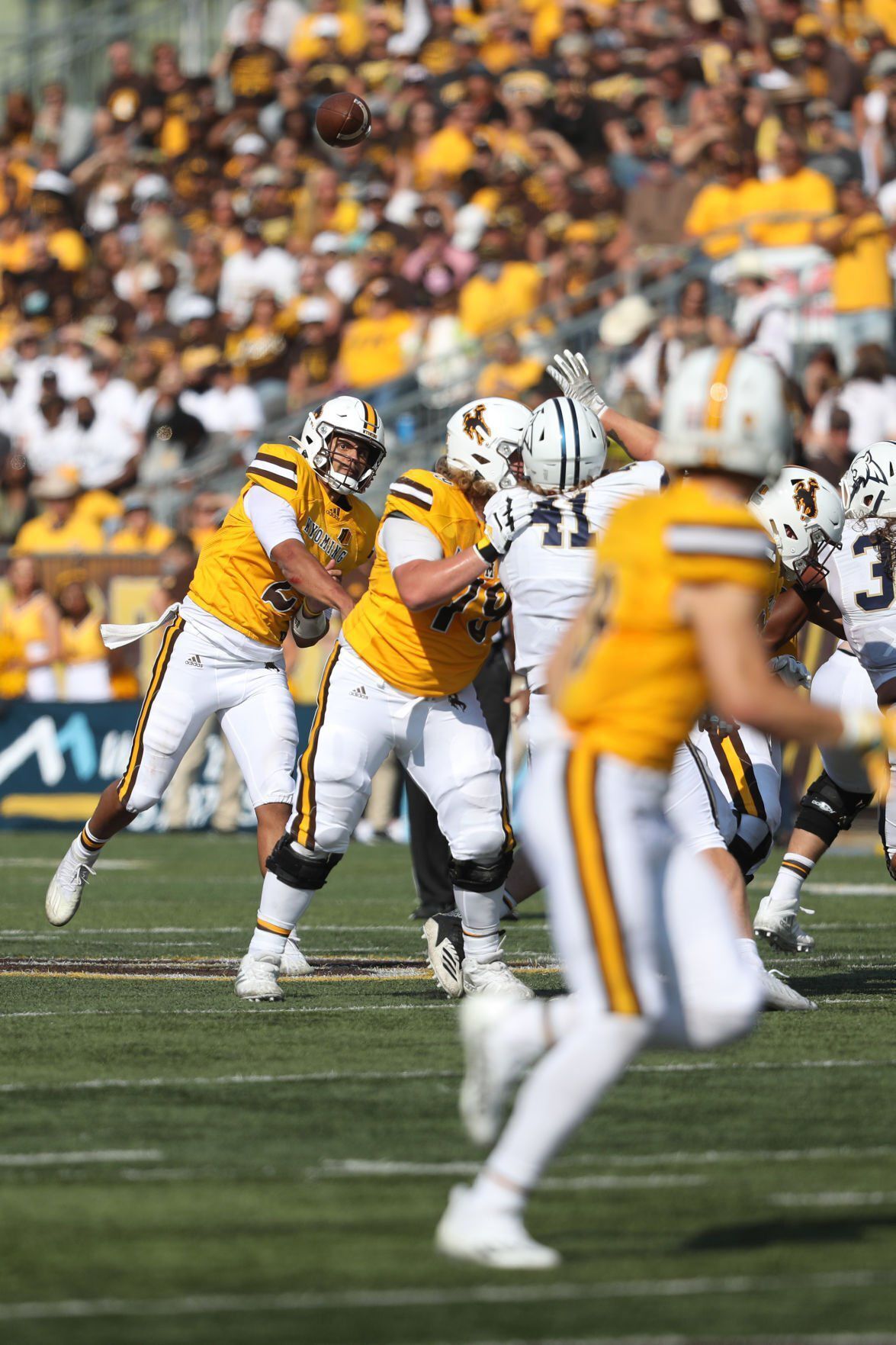 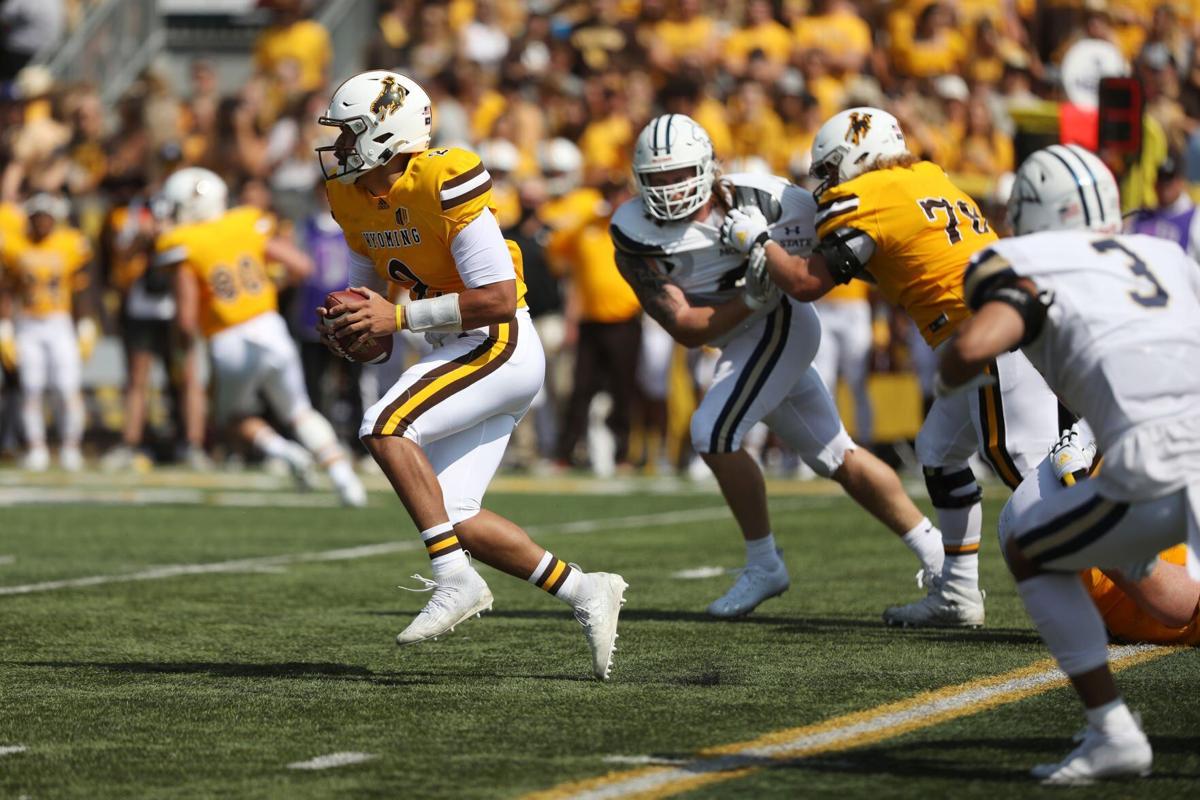