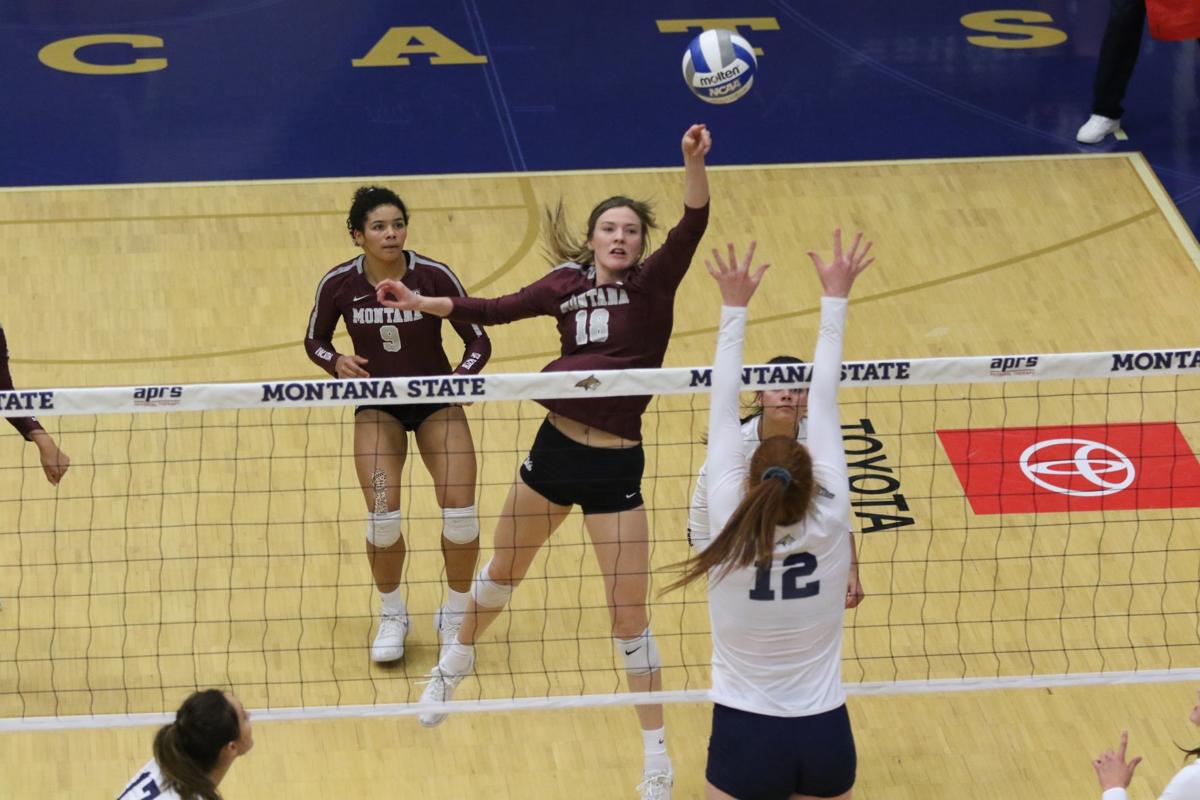 Montana's Missy Huddleston attempts to hit over the block of Montana State's Emma Pence on Tuesday in Bozeman as Griz teammate Amethyst Harper (9) looks on. 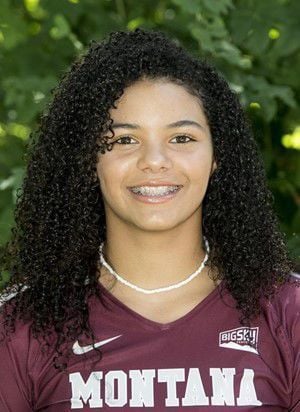 BOZEMAN — It’s been a season of growing pains for the Montana volleyball program.

With three seniors, no juniors and 10 underclassmen — nine of which are freshmen — the Grizzlies came into Tuesday’s rivalry match with Montana State having won just three times all year.

Harper, a 5-foot-10 leaper, led an attack that found a way to hit through and around Montana State’s typically stout block at the net to produce UM’s first win here since 2014.

Montana upped its record to 4-18 overall and 3-8 in the Big Sky Conference standings. The Bobcats, who came into the match locked in a four-way tie for third place in the league, dipped to 10-10 and 6-5.

“We had a lot of energy, obviously, because it’s Griz-Cat,” Harper said. “The adrenaline was already pumping before we even got off the bus.

“This shows us that we’re capable of doing things we didn’t think we were capable of before. Especially after that second set, coming back with momentum in the third and the fourth, we were carrying each other.

"There wasn’t a difference between upperclassmen and lower-classmen. We were one as a team.”

Montana, which beat Portland State at home last Saturday, started the match with a victory in the opening set, which was just its fourth first-set win of the season, to set the tone.

“The key for us in any of our matches has been our passing, our serve-receive,” UM coach Allison Lawrence said. “We knew if we gave ourselves all three hitters and were in system attacking, we would feel confident to score points on swings.

“MSU does an incredible job — probably the best in the conference — of managing rallies and extending rallies and keeping balls in play. You lose advantage as the rally gets longer against them. We really wanted to try to get kills on our first-ball side out. I thought for the most part we were able to do that.”

The Bobcats restored order in the second set by jumping out to a 17-3 advantage as middles Emma Pence and Kelsie White re-established their block up front. Outside hitter Evi Wilson, who sat out MSU’s most recent match due to a bout with mono, got hot with her powerful left-arm swing.

But the Grizzlies regrouped in the third, as Watkins scored on three tip kills. Harper put the ball down for a scramble point to make it 19-15, then ended it with a kill.

UM led by scores of 15-6 and 18-8 in the fourth set and weathered the storm of a rally from the Bobcats to close it out.

“So often with these games, it’s won on the serve and pass battle,” Montana State coach Daniel Jones said. “I think in that second set we jumped all over them with (our) serve. They were way off the net and our big block came into play.

“In the other three sets I think they did a really good job of just being super-aggressive from the service line and we couldn’t find a pass. When we’re timid on the passing line it’s just hard to go out and run any kind of offense behind that. Kudos to them. They played great.”

Wilson finished with a team-high 15 kills. White had four of MSU’s 13 blocks. Libero Allyssa Rizzo, who ranks fourth in all of Division I in digs per set and is closing in on 2,000 career digs, made a match-high 24 saves.

Harper attributed her success to being able to attack from the back row.

“That one was working a lot,” she said. “It just opens up a lot of shots.”

Montana State swept Montana in the first meeting between the teams in Missoula on Sept. 24, but this outcome was much different despite the fact that the Bobcats were coming off their first victory over Sacramento State, a five-setter at home last Saturday, in nine years.

Instead, the Grizzlies were able to play off their momentum from the Portland State match last week.

“I think (that) made us feel really, really good,” Lawrence said. “I think we just kind of ran with that. It felt like we kind of ran in here feeling like, ‘Alright, let’s go again.’ Which is a good feeling to have when you come in here and the stands are packed.

Even more so, Lawrence might say, when a young team wins.