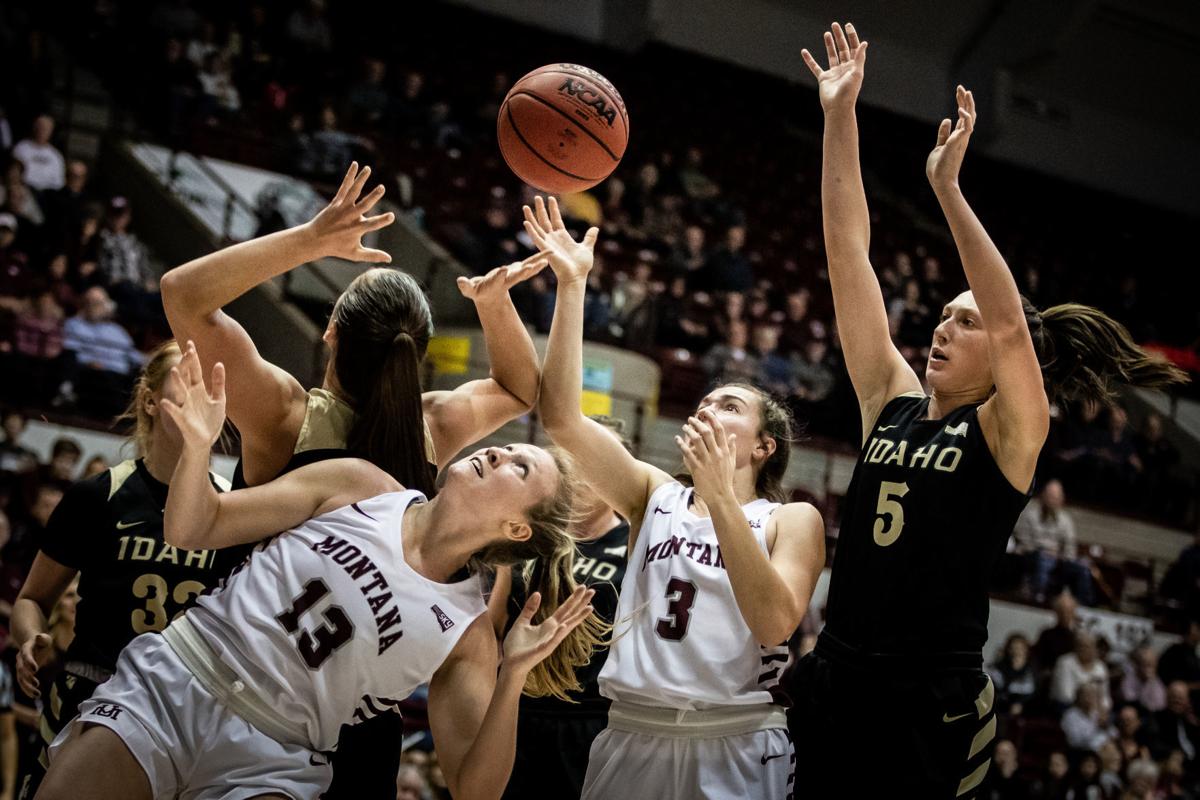 Montana sophomore forward Kylie Frohlich (13) and junior guard Gabi Harrington (3) battle for a rebound with an Idaho player in the third period of Saturday's game at Dahlberg Arena. The Lady Griz won, 69-60. 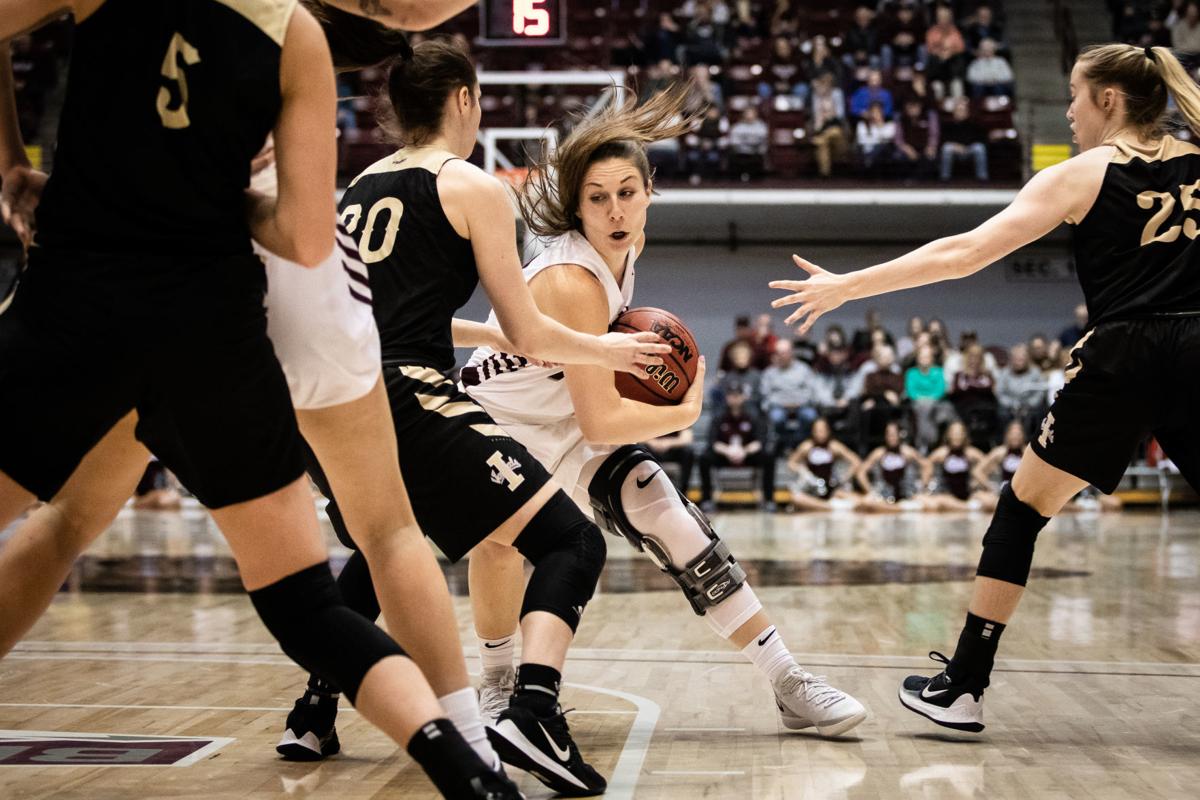 Montana senior guard McKenzie Johnston pivots to keep the ball away from the Idaho defense while searching for a teammate during the second quarter of Saturday's game. Johnston played 40 minutes, piling up 16 points and nine assists. 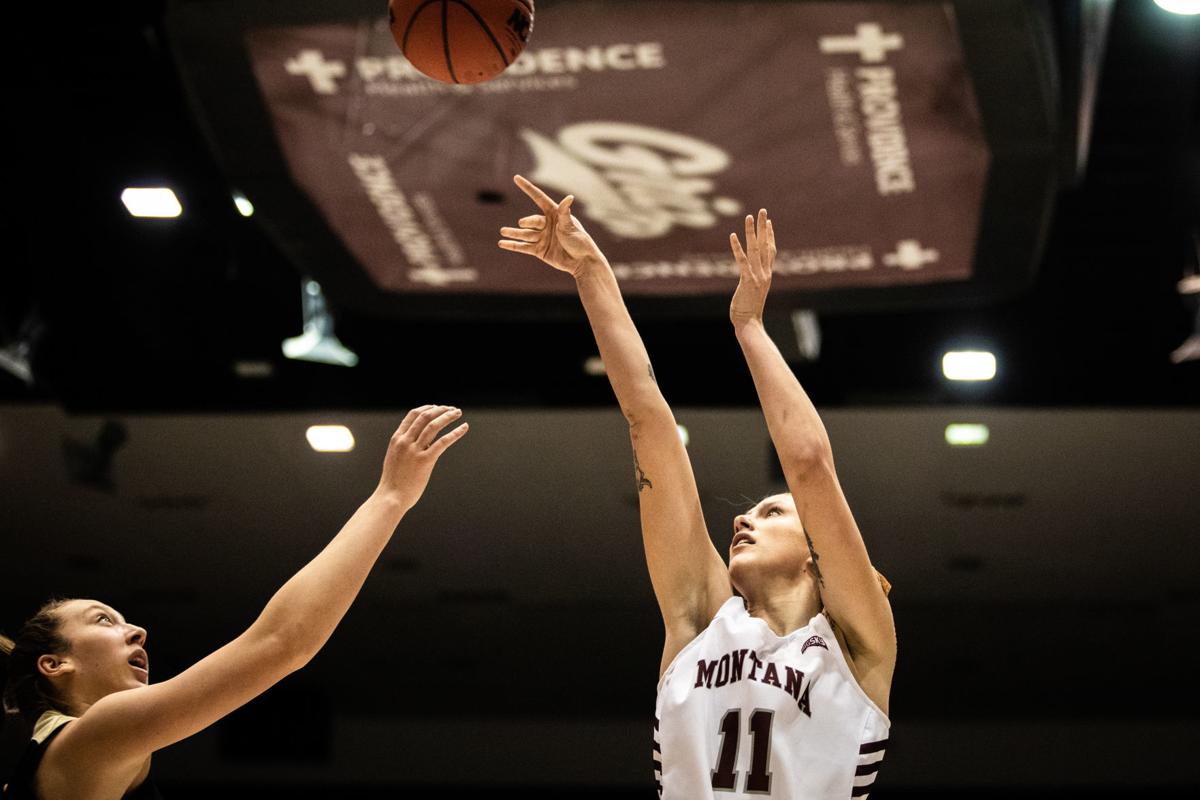 MISSOULA — The team that loyal Montana Lady Griz fans expected to see this season is beginning to take shape.

Surging UM put together arguably its best performance of the season in posting its most important Big Sky Conference basketball win of 2020. The second-place Vandals fell victim to a second-quarter surge and never recovered in dropping a 69-60 decision in front of 2,711 fans.

Sophomore Abby Anderson had a monster game for Montana. The 6-foot-2 post was a force on defense with five blocked shots — a majority coming on on 3-point shots — and she tied for team-high scoring honors with McKenzie Johnston, each tallying 16 points.

"We're playing with intensity, playing with a lot of desire," said Montana coach Shannon Schweyen, whose squad has won four of its last five, with its only loss coming in OT against league-leading Montana State.

"They're just really getting after it on the defensive end on a much more regular basis, which is helping us. That's carrying over onto the offensive end."

The Lady Griz (8-5 conference, 13-9 overall) were a little sluggish early in spotting Idaho a 16-8 lead. Then suddenly the hosts came alive on both ends, spurred by stingy defense and a big boost off the bench from Gabi Harrington, Taylor Goligoski and Kylie Frohlich.

"We were toying with whether to start man or zone and our zone got us going when we finally switched," said Schweyen, whose team took a 36-26 lead into halftime behind 11 points by Harrington.

Montana's play in the second half was proof positive it learned a hard lesson last weekend against Montana State. The Lady Griz led by 14 points late in the third quarter against the Cats but failed to maintain their momentum in an OT loss. On Saturday, Montana took a 53-40 lead into the final frame and didn't give an inch.

"Once we started getting in the groove we never really let up on them, which I thought was the best part," said Frohlich, a Missoula Sentinel grad. "Recently we've been putting together longer stretches of going hard and not having any lapses. That's helped us to put teams away.

"The MSU game was tough loss and everyone took that to heart to just pick up our efforts. That game showed us how hard we can play and we're right in it with all these teams."

Montana played for high percentage shots in the final frame and the result was 6-for-12 shooting from the floor. Idaho (8-4, 13-8) was forced to take a lot of 3-point shots in desperation, hitting just 8 of 23 in the game in part because Anderson kept stepping out to swat attempts.

"She's a great defender," Schweyen said. "That's one thing she's been doing a lot more lately is getting up on screens and getting a piece of those.

"They're a good 3-point shooting team so we wanted to try to not let them get any easy looks at those. Abby was all over the place today."

The win was especially big because the Lady Griz play their next three on the road, starting with Thursday's contest at Weber State. The road trip will conclude in two weeks with a rematch at Montana State.

"They've got confidence right now and they know they're a good team," Schweyen said of her troops. "When we play with that kind of intensity we can play with anybody."

The Lady Griz racked up another victory over Big Sky Conference No. 2, the University of Idaho, Saturday afternoon in Dahlberg Arena. The 69-6…

Montana sophomore forward Kylie Frohlich (13) and junior guard Gabi Harrington (3) battle for a rebound with an Idaho player in the third period of Saturday's game at Dahlberg Arena. The Lady Griz won, 69-60.

Montana senior guard McKenzie Johnston pivots to keep the ball away from the Idaho defense while searching for a teammate during the second quarter of Saturday's game. Johnston played 40 minutes, piling up 16 points and nine assists.