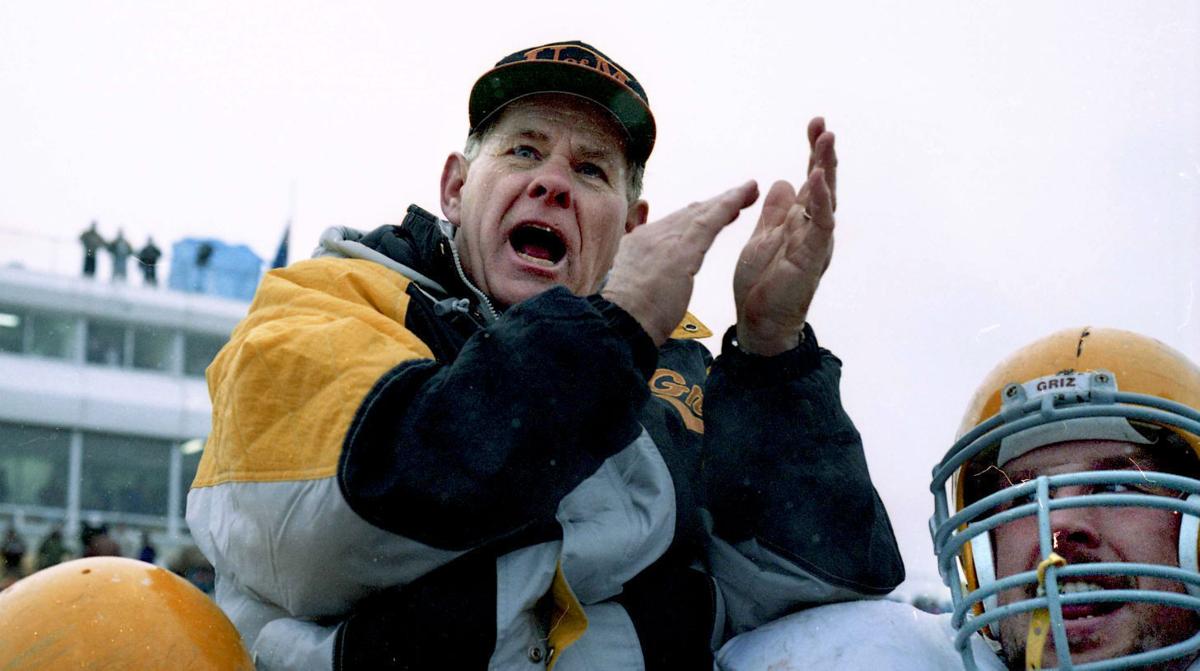 Don Read coached the Montana football team to its first national championship in 1995. It marked the start of a tradition of success that included six more berths in the championship game and another national title in 2001. The team is still looked upon as a national power and reached the FCS quarterfinals in 2019. 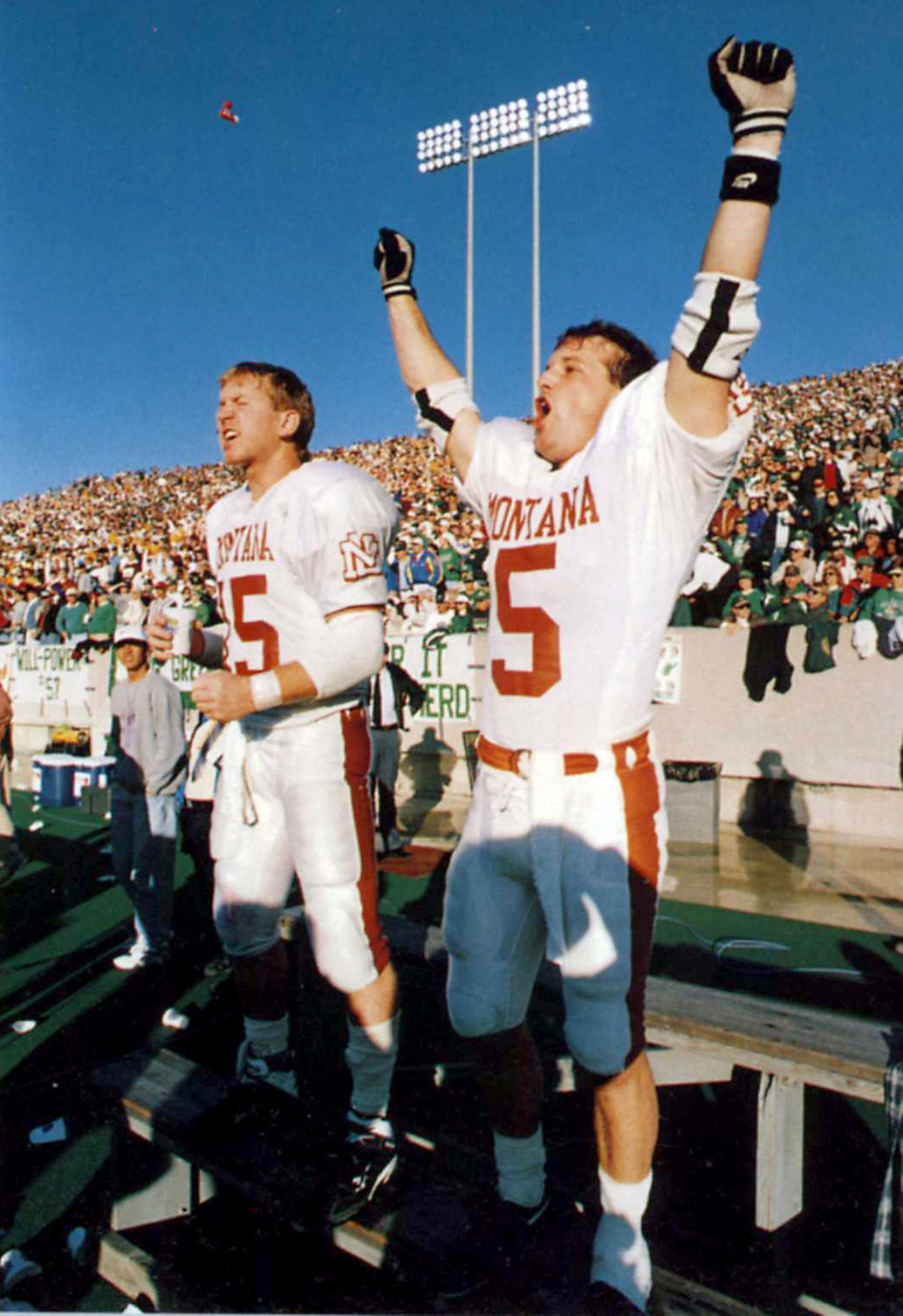 Montana's Matt Wells, right, and Dave Dickenson celebrate on the bench as time runs out and UM wins its first football national championship in 1995. The Griz defeated Marshall, 22-20, in Huntington, West Virginia.

Editor’s note: This is the third installment in a three-part series looking at Montana’s 1995 national championship football team for its 25th anniversary. Part one ran in Friday's paper and part two ran in Saturday's paper.

The Grizzlies’ offensive coordinator that season spent the Sunday after the title game in northwest Montana handling recruiting. It sure helped that he had just gotten something new to use in his recruiting pitch: a national title.

That was perhaps the most immediate impact of the Grizzlies’ 1995 title: they could use it to try to bring in better players. The Griz had seen Montana State employ that strategy after winning the 1984 national title.

“MSU had used that as springboard for recruiting and community acceptance ever since, so that was why it so important for Montana to not just get there but to win it,” said former Missoulian beat writer Kim Briggeman, who covered the 1995 team.

Montana State wouldn't make it back to the semifinals until 2019, but Montana cashed in on its success.

The Grizzlies' 1995 title started an unprecedented run of success on the national stage of FCS football, then known as I-AA football. They became a regular in the title game, making it there seven times in a 15-year stretch and winning the first two titles in program history.

“I think that broke the glass ceiling on expectations both within and externally on, ‘We can win the national championship at Montana,’” Montana coach Bobby Hauck said while reflecting on the 25-year anniversary of the title. “It was a huge breakthrough. Ever since then, it’s like, that’s the goal.”

Montana’s 17 consecutive playoff appearances from 1993-2009 is still an FCS/I-AA record. The 12 conference titles in a row from 1998-2009 remains the Big Sky Conference record. And the Griz have had just one losing year in the 34 seasons since 1986, when Don Read took over a downtrodden program after mediocre success at his previous stops.

Before Montana became known as a football school, it was widely considered a basketball school.

Jud Heathcote led the Griz to the Sweet 16 in 1975 and started an extensive coaching tree before he went to coach at Michigan State. Michael Ray Richardson was the No. 4 overall pick in the 1978 NBA Draft. And UM produced lovable basketball players like Larry Krystkowiak, Wayne Tinkle and Travis DeCuire before the football team won its first national title.

The building of Washington-Grizzly Stadium, an on-campus stadium, drew in more football fans starting in 1986. The 1989 run to UM’s first semifinals generated more community interest and a desire to host more first-round playoff games. The run to the 1995 title began cementing football’s prominence beyond Missoula.

“There was more money, but there’s not a great reward for success,” Hogan said. “The more we were successful, the more we generated ourselves, the less the university had to contribute to create our budgets. I always felt frustrated. The problem with that was we never could get ahead. As well as we were doing, it became, 'This is what you should be doing to generate revenue so there's less the university has to take away from the academic side,' which I don't disagree with.”

Blaine Taylor saw the change from the basketball side, playing for the Griz from 1981-83, being an assistant coach from 1986-1991 and taking over as head coach through 1998. To him, his time at UM was mostly "golden years" of football, men's and women's basketball and even volleyball, all enjoying success and being happy for each other.

The tipping point for him was the decision to move “The Zoo” student section from the east side of the court to underneath the north basket during the 1998 Dahlberg Arena renovation. That allowed UM to make more money from ticket sales on premium seating instead of giving access to students, and he still feels bitter because "they ruined basketball" at Montana with that move.

“In ’95, everybody was happy for each other," Taylor recalled. "There was very little jealousy or pettiness or in-fighting. There was money from the revenue of men’s basketball. Football now was enjoying revenue, and they spoiled the university during that time frame into thinking they could underfund athletics.

“We complained, ‘Why doesn’t the athletic department get more money from the state?’ (UM President) George Dennison always made us go out and get more fans and raise more money. Now you can see during the pandemic what can happen if you don’t have the state support.”

Montana is still the least-subsidized athletic department in the Big Sky. Football accounts for about $8.6 million in revenue with a profit of $2.9 million in FY19; the athletic department had a budget between $22-23 million, rising like all of college athletics. Men’s basketball brought in about $1.97 million and lost about $480,000, and women’s basketball brought in about $890,000 but lost about $510,000.

Montana expanded Washington-Grizzly Stadium in 2003 and 2008 after an initial expansion following the 1994 run to the semifinals. Seating went from 12,500 to 25,217, and Montana is among the FCS leaders in attendance, making about $4.8 million in football ticket sales in Fiscal Year 2019.

The influx in attendance has been a boon for the city of Missoula. Out-of-town visitors spend $2.53 million in Missoula County each home game, and Grizzly athletics produces 1,384 permanenet jobs, $120.8 million in gross annual sales for area businesses and $52.8 million in wages and benefits, according to a 2017 study by the Bureau of Business and Economic Research at UM.

Enrollment dropped to 10,015 in 2020 after a decade of football struggles. It's hard to say how much of a factor football had on either the increase or decrease, but athletics is typically seen as the front porch of the university, and that was increasingly football at Montana on a national scale.

“Montana football, other than ‘A River Runs Through It,’ there’s nothing that’s been more important to putting Missoula on the map nationally,” Kasper said.

As football grew, so too did the expectations and pressure to succeed.

The ’95 team led by loveable coach Don Read, affectionately referred to as Papa Bear, still had an innocence about it at that time. That Griz team was still "the underdog" and "the little engine that could," as former Missoulian sports editor Bob Meseroll put it.

The good times came to a close soon after 2009. Montana was embroiled in a sexual assault scandal that drew national headlines and received sanctions from the NCAA because of impermissibile benefits, erasing wins and titles from the record book and requiring a three-year reduction in scholarships.

“The sex assault scandal, that brought a lot of people out of the woodwork who were disappointed or upset with how important football had become at the university,” Meseroll said. “The sense among some was they had created a monster. Now they had to feed the monster.”

The Griz are now on their fourth coach since 2010. Robin Pflugrad, Mick Delaney and Bob Stitt couldn't keep up the same level of sustained success; Hauck returned in 2018 and took UM to the quarterfinals in 2019.

Perhaps that's the most impressive part of the 15-year run of success that was launched by the 1995 team was that it came under four head coaches: Read, then Mick Dennehy, then Joe Glenn and then Hauck. Each of them led Montana to at least one trip to the national championship game through 2009.

“The expectations of winning I don’t think have diminished at all although they're not the same dominant team,” Meseroll said. “I do think there is this undercurrent of 'They’ve become too big for their britches, they’ve become a sacred cow, they’re untouchable, and no matter what, football is going to get its money.' It’s kind of become an entitlement. Part of the expectations from fans was this entitlement that we go to the playoffs every year — they consider it a birth right — and when they’re not, that creates coaches getting fired.”

In the Grizzlies’ absence, other Big Sky teams have risen to the top of the conference, which expanded from nine teams in 2009 to 13 football-playing members. Seven teams other than UM have won at least a share of the conference crown since 2010.

Eastern Washington also emerged on the national scene by winning the 2010 national title and losing in the 2018 championship game. The Eagles are the only Big Sky team since the Griz in 2009 to make the title tilt.

Their rise could be tied to that of Montana because as the Griz had success, it forced other programs in the Big Sky, especially Montana State, to pour more money into football.

“They were just hell bent not to let us get away, get too far ahead of them,” Hogan said.

The 2010 decade was dominated by North Dakota State, which won eight championships, filling the hole left by Montana during its decline. Now the Griz, like every other team, are chasing the Bison, recently completing the state-of-the-art Champions Center in 2017. The 1995 Griz team made a $300,000 donation to the Champions Center.

Maybe it's not realistic for Montana to win eight championships in a decade like NDSU. Maybe the Griz would settle for another run of seven title-game appearances and two crowns in a 15-year stretch.

“I absolutely believe Montana football can have sustained success,” Montana athletic director Kent Haslam said. “If I didn’t, then I need to probably find another job. The bar is set very high at Montana, and we definitely don’t apologize for having high expectations. That is what makes this place so amazing.”

25 years after a Copper and Gold Championship

25 years ago the University of Montana Grizzlies defeated Marshall 22-20 to win the NCAA Division I-AA championship.

Don Read coached the Montana football team to its first national championship in 1995. It marked the start of a tradition of success that included six more berths in the championship game and another national title in 2001. The team is still looked upon as a national power and reached the FCS quarterfinals in 2019.

Montana's Matt Wells, right, and Dave Dickenson celebrate on the bench as time runs out and UM wins its first football national championship in 1995. The Griz defeated Marshall, 22-20, in Huntington, West Virginia.