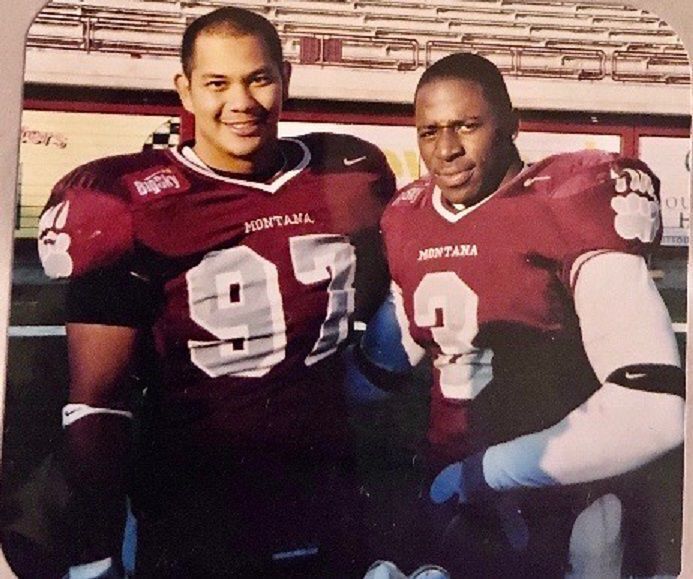 Former Montana Grizzly Herbert Fernandez, left, and teammate Trey Young pose for a photo. Fernandez died Saturday at 40 years old from an autoimmune disease and lung inflammation, according to a GoFundMe page organized on behalf of his wife, Kira Fernandez, who he leaves behind along with three children under age 10. 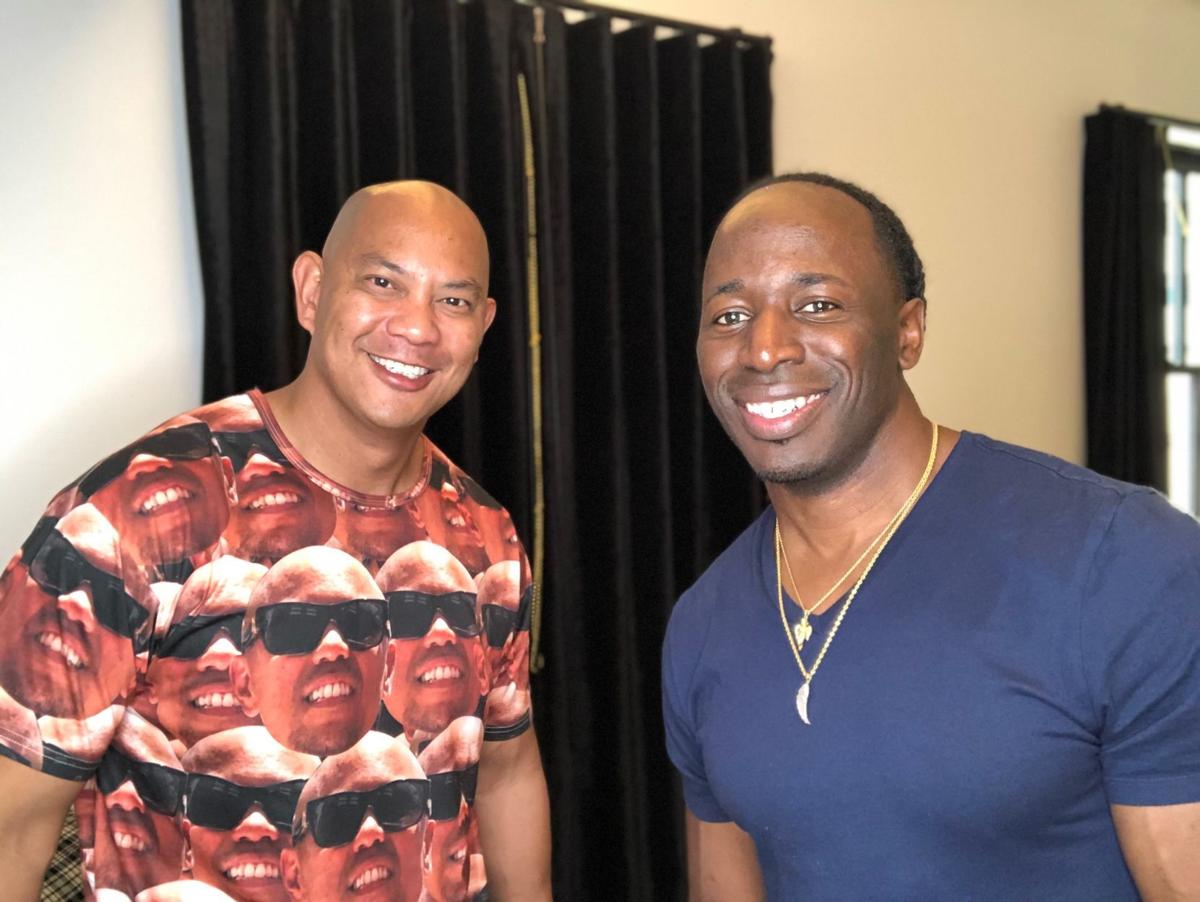 MISSOULA — Trey Young’s ears perked up when he heard Herbert Fernandez mention he would be playing for the Montana football team starting in the fall of 1998.

Young, who hadn’t known anyone else going to Missoula, then noticed Fernandez pop up his head when he said moments later that he’d also be suiting up for the Grizzlies.

It was a high school all-star football game in San Diego where the two met that day and began to develop a friendship. They became teammates and roommates at Montana, won the 2001 I-AA national championship together and became the best of friends for over 20 years.

“The biggest thing about Herb is he was always bigger than life,” Young recalled Wednesday while reminiscing about Fernandez, who died Saturday at 40 years old from an autoimmune disease and lung inflammation, according to a GoFundMe page organized on behalf of his wife, Kira Fernandez, who he leaves behind along with three children under age 10.

“I never liked the attention, but he loved to be around folks. I wouldn’t say he liked being the center of attention, but it just always gravitated toward him. He loved people.”

Fernandez’s former teammates spoke highly of his team-first attitude, warm-welcoming nature and smile that could light up any room. He was the one who would help organize trips to get family and friends together, and he was the one who would celebrate people and lift up others in person, on the phone or in group text messages.

“He just had that jolly Filipino love and was always positive,” ex-teammate Jason Francis recalled. “He loved being a goofball. If they had hype men back in the day, Herb probably would have been my hype man. He always had a smile. Never down. Never negative. Always ready to go. Always ready to have fun. He was always a cheerleader in every aspect of life.”

Text messaging became Fernandez’s way of staying on contact with his former teammates over the past three weeks while he was in a hospital ICU with a shortness of breath that prevented him from speaking on the phone.

He could sometimes oversell the severity of injuries to his best friends, so there were thoughts he'd be able to pull out of this scare. He still made sure to express how much he loved his friends while maintaining an eternally optimistic outlook that defined him to those how knew him and saying he was hoping to hang out with them again soon.

“For him, it was all about having a good time,” former teammates Jeramiah Butenschoen said. “That was his total personality. He’s just always having fun on the field. He was the ultimate hype man. He was always everybody’s hype man. No matter how bad a day you were having, he’s like, ‘You’re good.’ He stayed that way even to the end. If you were having a bad day, he’d say there’s always another day tomorrow.”

Fernandez most recently returned to Montana in November for ex-teammate Vince Huntsberger’s induction ceremony into the Grizzly Football Hall of Fame. That’s where former teammate Dane Oliver, now the Missoula Sentinel football coach, reconnected with him.

“Herb’s smile radiated in any room he walked into,” Oliver said. “He was upbeat, positive and always lifted others up before himself. He was an energy giver as a teammate regardless of the circumstance.

“A great person, and I am thankful I had the opportunity to spend some time with him last fall on his annual trip to a Griz game. His response was typical Herb: a big bear hug and long embrace.”

Fernandez was part of that Grizzly Hall of Fame earlier in the decade when the 2001 national championship team was inducted. He’s the third member of that team to die at a young age. Curt Colter, of Hysham, died of heart disease in 2012 at 33 years old; Tim Bush died in a mining accident in 2010.

“Just seeing on social media how many folks from everywhere are commenting and putting out memories, you think, ‘How can a guy be friends with so many people,’” Young said. “He was that big of an influence.”

Fernandez, the son of immigrants from the Philippines, was born Feb. 19, 1980, in Schenectady, New York. His family moved to San Diego when he was young.

One of five children, he played football at San Diego’s Mira Mesa High School before coming to Montana in 1998 as a skinny kid. By the time he graduated from UM, he packed on 40 more pounds, met his wife, overcame the culture shock of Missoula, showed off his decent dance moves and kept the conversations lively at The Oxford Cafe all the way until 3 a.m.

“Everyone he ever was around will always remember him,” Francis said. “There’s not many people that 20 years removed people still remember him from one interaction. He embraced Missoula in such a way that he was an array of sunshine.”

“Herb and that infectious smile will be missed by so many,” former UM athletic director Jim O’Day wrote on Twitter.

Fernandez was a backup defensive end as a junior during the 2001 national title season, but his hard work and preparation soon paid off. He played in eight games and tallied 20 tackles off the bench in that championship run.

“He loves the game and loves the program,” former Montana coach Joe Glenn said in a 2002 senior profile of Fernandez. “He loves the school and he's always positive. He's been a terrific friend and a great teammate. He's got a great work ethic. All of those things make him special.”

As a senior, he saw action in six games because of Ciche Pitcher’s season-ending injury. He had 19 tackles, 4.5 tackles for loss, three sacks, one fumble recovery and one interception.

In his third career start, while filling in for all-conference D-end Tim Bush, Fernandez had a 16-yard interception return touchdown on a swing pass in a 45-14 win over Northwestern State in the first round of the playoffs. It's a play Huntsberger still recalls even though he graduated the year before.

“Herb was a great teammate and always had a positive attitude,” Huntsberger said. “Everyone loved being around him. He will be deeply missed.”

After the season, Fernandez was named the Pat Norwood Award winner for being the team’s “Most Inspirational Player.”

“Everyone loves the guy,” former Griz linebacker Joel Robinson said after that 2002 playoff win. “He's a team guy all the way. He's never whined. He just steps in when his number is called and does a great job.”

Fernandez and former teammates had gotten together to celebrate his 40th birthday in February. Little did they know it’d be their last time seeing their friend who treated them like they were part of his enormous extended family in San Diego and would introduce them to his circle of friends from back home.

“Now that he’s not here, it’s really disheartening because there was nobody like him,” Francis said. “I think the shock and tragic side of this is he’s a young man with a lot of life to live and a lot to give.”

Adding to the difficulty of losing Fernandez for Young, Francis and Butenschoen is they all have children who are around the same age as Fernandez’s kids: Chloe, 9, Skyler, 7, and Kingston, 5. The GoFundMe page has raised over $44,000 in less than one day.

A different type of goal among some teammates-turned-friends is to share stories about Fernandez, who had been coaching youth basketball, and keep alive his memory so that his children know who he truly was as a person.

“He was a huge part of my career,” Young said. “He was a big fan of mine. He helped me be a better person. I don’t have too many good friends, but Herb was definitely one of them. He did everything big. He lived his life fully.”

University of Montana football players who took to Twitter to question the Missoula City-County Health Department's coronavirus quarantine restrictions have since apologized, according to the UM athletic director

University of Montana football players who took to Twitter to question the Missoula City-County Health Department's coronavirus quarantine restrictions have since apologized, according to the UM athletic director

Former Montana Grizzlies Dante Olson and Jerry Louie-McGee might not be finished with football just yet.

The Champions Center at the University of Montana reopened Wednesday after being closed for four days as a precautionary measure because an unspecificed number of Griz athletes were placed in quarantine or isolation.

The Montana football team gets its seventh known commit in the 2021 recruiting class.

As a potential fall practice schedule and spring season begin to take the earliest of shapes, the Montana football team is back at work preparing for whatever is next.

'Let’s show them who Mo Town is': An oral history of the day Montana shocked No. 1 North Dakota State

Relive Montana's improbable win over No. 1 North Dakota State to kick off the 2015 season through the eyes of those who were there.

Former Montana Grizzly Herbert Fernandez, left, and teammate Trey Young pose for a photo. Fernandez died Saturday at 40 years old from an autoimmune disease and lung inflammation, according to a GoFundMe page organized on behalf of his wife, Kira Fernandez, who he leaves behind along with three children under age 10.