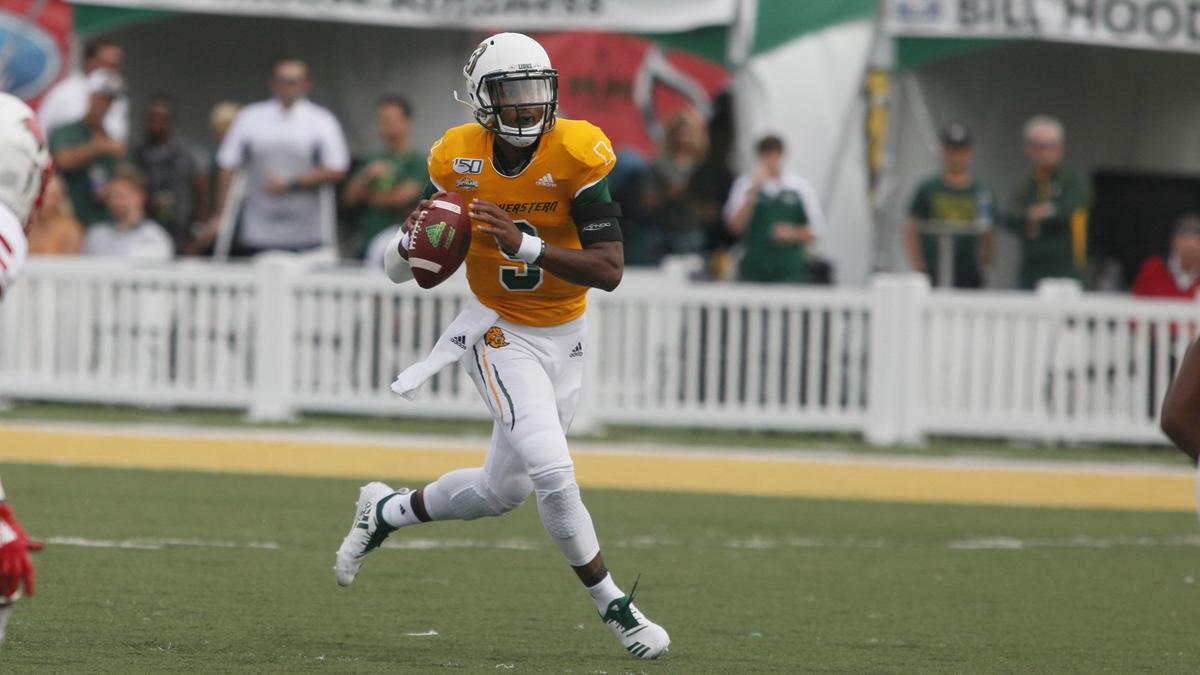 Southeastern Louisiana quarterback Chason Virgil looks to throw the ball in a game this season. Virgil and the Lions come to Missoula this Saturday to face Montana in the second round of the FCS playoffs.

MISSOULA — Southeastern Louisiana quarterback Chason Virgil wasn’t just good enough to get an FBS scholarship offer — he started 14 games at Fresno State and ranked seventh in the nation among freshmen for passing yards in 2016.

Virgil’s reign at quarterback ended early in 2017, the first season for head coach Jeff Tedford, who wanted to go with Oregon State transfer Marcus McMaryion. Virgil didn’t get any playing time the rest of the year and decided to transfer after the season.

“I just needed a different scenery for me, just a new situation,” Virgil said. “I got, I don’t want to say benched, but they moved on from me, they moved to Marcus and I just wasn’t playing. I felt like I could be playing somewhere, so decided to leave.”

Virgil heard from SLU offensive coordinator Greg Stevens, liked what he was told and accepted the offer to come closer to his home of Mesquite, Texas, and play for first-year coach Frank Scelfo, who tutored NFL quarterbacks Nick Foles, Blake Bortles and Tom Savage, among others.

The 6-foot-1, 200-pound signal caller took over quarterbacking duties for the Lions in 2018, ranking ninth in the FCS in passing yards but leading them to a 4-7 mark. His individual play still led him to being profiled as a 2020 NFL draft prospect by NFL Draft Diamonds in the summer.

In year two, he guided them to an 8-4 record and the third playoff appearance in program history, earning third-team All-Southland honors in the process.

Montana will try to slow down Virgil and the Lions’ potent passing attack in their second-round playoff game at 1 p.m. MT Saturday in Washington-Grizzly Stadium. Virgil is coming off what Scelfo called his best half of football in guiding SLU to a comeback win over Villanova.

“I think Chason had maybe his best game,” Scelfo said. “I know the best half of football I’ve seen him play. He was just locked in the second half.”

Virgil completed 36 of 49 passes for 474 yards with three touchdowns and one interception in the 45-44 win over Villanova. He spread the ball around to seven receivers, helping the Lions have three 100-yard receivers for the first time this season.

“He’s taking care of the football and stuff like that,” Scelfo said of Virgil. “His accuracy, the look in the eye, the way he approached it, everything that second half. His first half wasn’t bad, I’m not saying that, but his second half, dude was locked in, man. He was good. He came off the sidelines knowing what was going to happen. He just knew it. His reads were dead on. Really good. Really good.”

“I would look at myself like a point guard on the basketball court,” Virgil said. “I just like to get everybody involved. I don’t like everything to be about me. I just like to get my teammates involved and just let them do all the work. Just get them the ball as much as possible. I can make plays if needed. I wouldn’t say I’m a scrambler, but I can improvise well enough to where if I need to run, I can do that.”

Virgil is backed up by Arkansas transfer Cole Kelley, who’s more of the running and short-yardage threat. He has 87 rushes for 204 yards and 10 touchdowns but is still a passing threat with 785 yards and 10 scores.

SLU also has a viable running back in Williams, an Indiana transfer who’s run for 565 yards and eight touchdowns. He could potentially be an X-factor if the cold weather in Missoula isn’t conducive for the Lions’ passing attack.

Scelfo has the confidence to stick with Virgil if he gets going. Montana’s defensive line will need to cause chaos in the backfield to ensure that doesn’t happen by helping a porous pass defense that’s giving up 280.3 yards per game, 116th out of 124 FCS teams.

“If Chason’s locked in, we’re throwing it,” Scelfo said. “When you get a guy that’s locked in like that, you just ride him.”