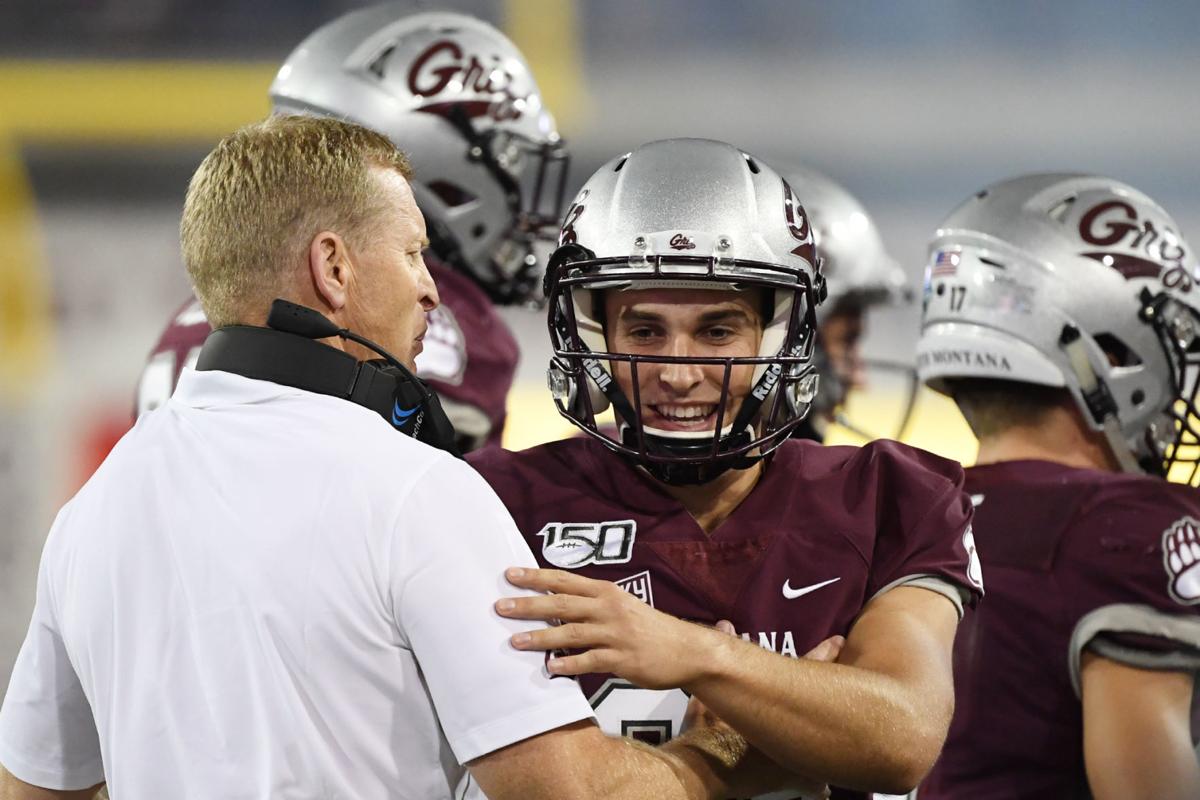 Montana's Brandon Purdy celebrates with Montana head coach Bobby Hauck after tying his career best with a 47-yard field goal against North Alabama earlier this season. He regained his starting job this year after he was named to the All-Big Sky third team and was a HERO Sports FCS All-America honorable mention in 2017. 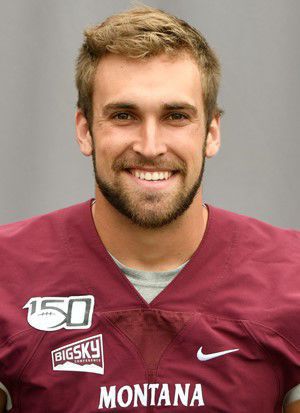 MISSOULA — Montana junior kicker Brandon Purdy had to win back his starting kicking job this offseason after missing 2018 with an injury following a redshirt freshman season in 2017 in which he was named to the All-Big Sky third team and was a HERO Sports FCS All-America honorable mention.

The Kalispell Glacier grad has kept a stranglehold on the job, attempting all 12 of Montana's field goals and making nine of them. Purdy has attempted just six field goals in the past nine games after trying six in the first three games. That's partly because of Montana's ability to score touchdowns, and he's made 51 of 53 PATs.

Extra points and field goals are of paramount importance in the playoffs — just ask Southeastern Louisiana, which won its first-round game, 45-44, because Villanova missed an extra point. The Lions had lost a chance to win the Southland title partly because of a missed extra point in a 28-27 loss.

When Montana hosts Southeastern Louisiana on Saturday, Purdy could have a chance to do something that hasn't been done in a decade. The last time a Montana player made a field goal in Washington-Grizzly Stadium in December was Dec. 12, 2009, when Brody McKnight made a 32-yarder in the semifinal win over Appalachian State. McKnight did make a 20-yard field goal on Dec. 3, 2011, but that game was later vacated.

Purdy sat down with 406mtsports.com to talk about how his season's gone, kicking in the cold weather and the Grizzlies' return to the playoffs.

Q: Growing up in Montana and now playing here, how does it feel to have the playoffs back in Missoula?

A: Pretty good. I think every single person on our team has never been in the playoffs. Some of the seniors now might have been working with them the week of the game last time in 2015. It feels good. I don’t know what it feels like. I’ve never played in December before. This is really fun. We’re flying around. We’re having a good time. We got a couple days off, much needed. It’s good to have a bye. I think we’re feeling pretty good coming into this week.

Q: Do you sense that the fans are hungry for a playoff run?

A: Oh yeah. Being from Montana and the past few years going home for Thanksgiving, it’s a weird feeling, especially when you’re not playing anymore. I never knew anything different. It’s nice being able to go home for a good reason and come back and get to work. I think that the fans are very eager. A lot of people from my hometown are very eager. There are a lot of Griz fans in Kalispell.

Q: What would it mean to you or the team or the community to make a deep run?

A: It’d be amazing. It’d be awesome. I’m just excited for this next opportunity. I think we all are. We know it’s the next one. We know if we want to continue that we have to win this game. So, that focus is game by game. We’re really excited. We got our head down and are ready to go.

Q: You had to win back the starting job this season. How would you assess how the season’s gone for you?

A: It’s been good. Being a kicker, we want to kick field goals. We want to be called upon when our name’s called upon. But when we’re kicking PATs, it’s a great thing. We haven’t had that many field goal attempts, but that’s awesome for our team. It’s awesome running out there and hitting a PAT. I have people in my hometown like, ‘Oh, they’re not giving you that many field goal attempts.’ But it don’t matter. If we’re scoring touchdowns, it’s better for our team. So, I’m happy. I’m really glad I’m in this position. I love my team. It’s always exhilarating when we have some big, crazy run or turnover or return a touchdown from a kick because I got to be ready to go kick a PAT. It’s fun.

Q: And a little easier than kick a field goal.

Q: Aside from winning back the job, any other special motivation for you this year?

A: I have another left, but a lot of the guys I grew up with in this program are graduating. When we get close to these last games, we tend to start playing for other things. One of those other things is make sure these guys don’t have to stop playing. For some of them, it might be their last football game. We’re playing for our teammates. We also play for a whole bunch of other things. But the brotherhood, when we’re sitting in our team meeting, it’s about the guys in that room.

Q: It's been three games in a row you haven't attempted a field goal. So, how do you stay focused and ready to go in a time like that?

A: I have a routine. When we get to midfield, we’re looking that we might be hitting a field goal here soon or a PAT, so just do my routine. There’s a bike over there by my net typically every game. So, stay on the bike, stay warm, don’t kick too much in the net because kickers tend to outkick themselves when we’re not kicking a lot. Say we have a little bit of a break and we haven’t kicked a PAT or field goal for a quarter or two, they’ll get in the net and try to re-warmup. No, you got to stay warm throughout. You just got to have the mentality that when your name’s called, you got to be ready.

Q: What are the biggest things to account for when kicking in the cold vs. early in the season?

A: I was very lucky to kick two years in Kalispell, Montana, where they get a lot more snow than here. So, I’ve kicked in weather a lot. I’ve kicked in the tundra when there wasn’t turf on the ground in Bozeman my junior year late November and in Kalispell my senior year late November. So, I know what it feels like. The ball gets harder. The leather gets frozen. The bladder doesn’t really like to expand on the ball. As long as our feet are warm and the balls are somewhat malleable, we’ll be alright.

Q: You don’t have to approach kicks any different in the cold?

Q: A fun tidbit here: Are you aware the last time a Griz player made a field goal in Washington-Grizzly Stadium in December was 2009?

A: No way. So that was the last time they made a run towards the championship game against Villanova. That’s a long time. That’s a decade. We’ll get the job done. We’ll be alright. Hopefully I can contribute. But I’m fine if we hit eight PATs. I’ll be OK with that.

Q: Some fun ones to close. What’s your go-to music?

A: I grew up on the piano and the cello. So, I always liked to listen to some classical Baroque music when I was kicking in high school. I had to change that up because that just didn’t work for me anymore. I like hip hop, rap, everything. I hated country, but that locker room’s always playing country, so I guess I have to like it, not by choice, but it’s alright.

Q: So, were you playing the piano and cello?

A: Yeah, I grew up playing both of them. My sister started playing it before me. It’s fun. I couldn’t sing, and I wanted to be able to express myself musically because my sister was dang good at all that. She was really good. I got on the piano, played it for quite some time and then picked the cello up. Cello was fun as well.

Q: If music is a big passion for you, what are your thoughts on Christmas music played all month?

A: Not a fan of going shopping on Black Friday and hearing that.

Q: Now that we’re in playoffs and have brackets, who would be the No. 1 seed in a bracket of the best singers on the Griz?

A: Supposedly Eli Alford has some pipes. I haven’t heard him yet. I sometimes hear him in the shower. But, to be continued. I think he’s one of the top dogs — so I’ve heard. Malik Flowers, he raps. He can spit some game. They’re both up there.

Q: Any special meaning behind jersey No. 39?

A: Yeah, coach Shann Schillinger. We walk down the tunnel, and I see him on the right side every time we walk down there. It was given to me. It was either 38 or 39. Shann wore 39, so. I don’t even remember if I had a choice. I probably didn’t. It was probably like, ‘You take this.’

Q: Was he still a guy you looked up to when he was playing?

A: Definitely. I grew up watching him. Then he’s our special teams coordinator, so I reported to him for a couple years. Right now, he’s one of the guys I talk to specifically with kicking. Definitely look up to him. He’s a good guy.

Q: Lastly, what’s it been like playing for (coach) Bobby (Hauck)?

A: It’s awesome. He knows each specialist individually. He can watch me kick a ball, and if I miss it, he can tell me what I did wrong. Not many head coaches can do that. He obviously has the stat sheet for all the places he’s been for special teams. He knows what he’s doing. It’s awesome. He’s a great guy. That’s probably the most important thing is that he’s a good guy, not just a great coach. He’s awesome.