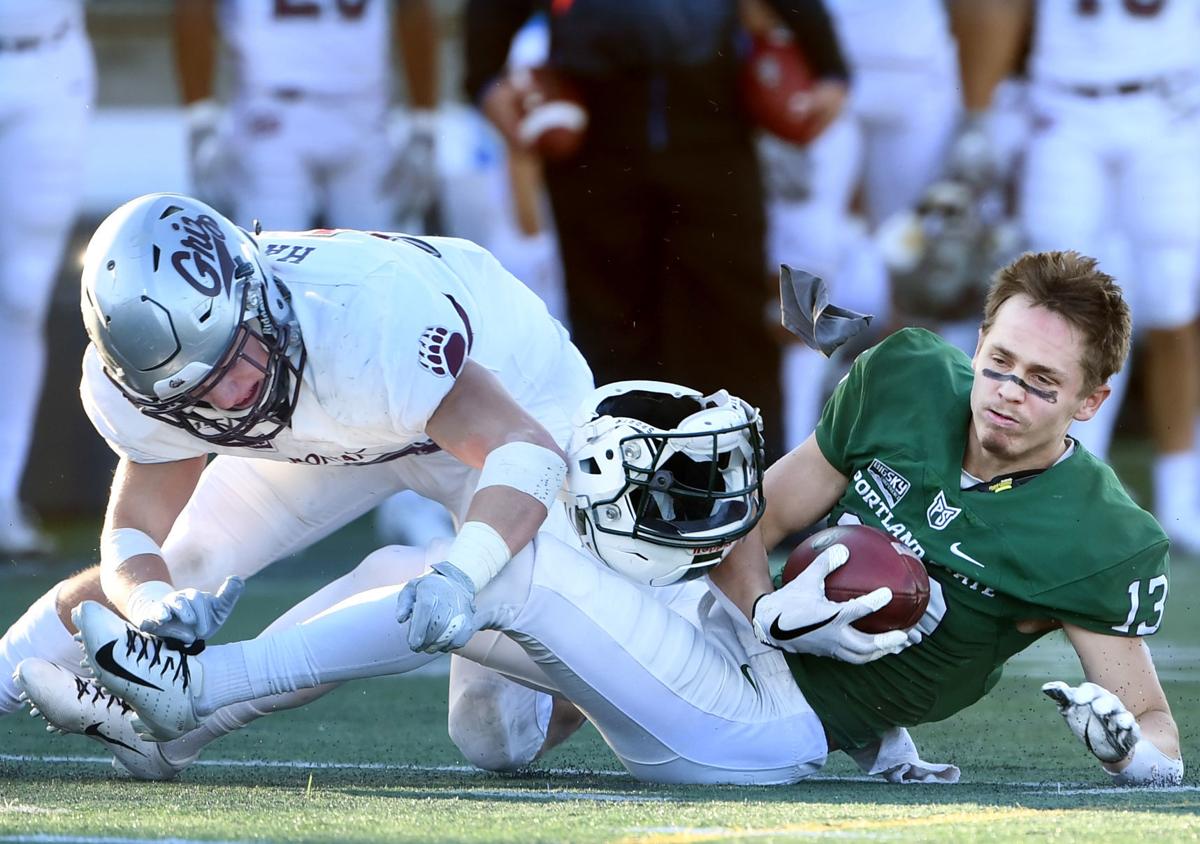 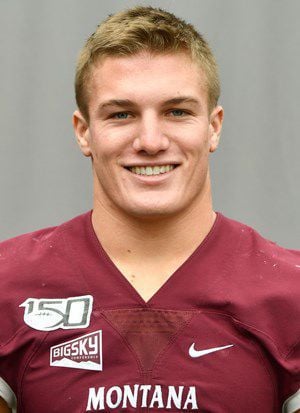 MISSOULA — Montana sophomore safety Robby Hauck grew up steeped in the tradition of Grizzly football — maybe the most obvious statement since his dad, Bobby Hauck, was the head coach from 2003-09.

A big part of that tradition is the annual rivalry with Montana State, and Robby knows its importance all too well. He grew up watching the Brawl of the Wild games but was never allowed to go to Bozeman as a kid, so this Saturday will be his first trip there for a football game.

Robby has been a key component in the Grizzlies’ defense since transferring from Northern Arizona when Bobby was hired for a second stint at Montana in December 2017. The Griz are coming off their most dominant defensive outing and will be looking to snap a three-game losing streak against the Cats this weekend.

Robby sat down with 406mtsports.com to talk about his second season at Montana, playing for his dad and growing up entrenched in the Cat-Griz rivalry.

Q: The Brawl of the Wild is coming up, so what are your earliest memories of those games?

A: Something that sticks out in my mind is 2008 when we came out in the throwback uniforms. The funny thing about that was I knew something was up that entire week. Just felt like something was going on. Trying to pester my dad to figure out what they were doing. He would not tell me because I had the loud mouth at school and would have spread the news. I knew something was up. When they came out of the tunnel after warmups — because in warmups they had the normal maroon and silver on — and then came out in the throwbacks it was pretty cool. I probably wouldn’t have told my young self either because I had a loud mouth back then.

Q: Were you playing on a basketball team that went and you weren’t allowed to go?

A: You know, AAU teams and all that. There may have been one tournament or something like that. I had other things going on anyways. The rivalry runs strong in my family for sure.

Q: So four years ago, what did you end up going to Bozeman for in your first trip?

A: I was going fishing actually. It was kind of a covert mission with my dad. We went out and did some fishing in his old backyard out by Big Timber. I hadn’t spend much time over in that area of the state, and it was really cool to go through Big Timber and see old family friends and family and go fish the Boulder River.

Q: So did you spend much time in Bozeman or just drive through?

A: Just flew into Bozeman and drove out toward Big Timber and the Yellowstone.

Q: Did Bobby ever give you a reason why you couldn’t go to Bozeman before, or was it just understood?

A: It was pounded into our head early about how we felt about the neighbors. The other thing I thought was fun was my cousins and I, my sisters, we had a song that we sang in front of the team about the Bobcats that week. I thought that was the coolest thing just being around the team.

Q: Did you guys come out to practice to sing that?

A: Yeah, came out to practice. Just being around it all, it was cool.

Q: Do you recall how the song went?

A: I don’t recall it much. It was more just about how we felt about the Bobcats. It kind of stays between all my cousins and the teams we sang it to. But, yeah, it was fun. It was something we always looked forward to each year. It’s one of the cool memories that stick out in your head.

Q: You mention your cousins, so what’s it been like to spend a year together playing with Ryan (Tirrell) on this team?

A: It’s been good. I like to watch him specifically practice when he gets in, whether it’s the rookie scrimmages on Fridays or anything like that. I like to watch how he’s improving and becoming a good player. It’s been fun. I’ve never been able to play with him or anybody in my family, so it’s really cool to not only have a family member coaching me but also another one playing with me.

Q: Talking about family, you’re Robert Lawrence Hauck III, like your dad and grandfather. Why do you go by Robby?

A: It’s just something that my parents called me from when I was little. I’ve just always been Robby or Rob. So, yeah, my parents just called me Robby. People call me Rob, which I’m fine with. But I’ve never been called Robert, unless it’s a professor until I get to know them, and then they call me Robby. It’s going to be a weird time when it comes around where I’m Robert or Rob permanently. Robby just seems fitting for me right now. I just feel like a little kid still.

Q: What’s it’s like around campus being not only a Griz football player but ‘Coach Hauck’s son’?

A: It’s fun. But it’s really just being on this team. I think it’s the same for everybody, whether I was Coach Hauck’s son or not. I think I’m just treated the same as anyone on the team, which I like. Maybe some of the older people around campus know me as Coach Hauck’s son. Just being able to represent our university and football team is great.

Q: Now in year two, what do you feel has been the biggest improvement for you on the field?

A: Just feeling comfortable with the scheme. And then the guys playing around me, being with the same guys for the most part for two years is a lot better than the first year. Sometimes we flip on some film from last year and it’s just so much different, and it’s not as fluid as it is this year. That’s probably one of the biggest things.

Q: As you approach the postseason, what are you and the secondary continuing to work on?

A: Just keep playing hard, tackling, covering and then playing the ball. Just anything a good secondary should be — fast and physical and taking the ball when it’s in the air.

Q: So how would you describe yourself as a safety?

A: I would like to think that I’m a tough, physical, hard-playing player. But it might have a different opinion by the coaches on some days. I pride myself on being tough and tiny but mighty in a sense. I just want to be one of the hardest-working dudes on the field, and that’s tough with this defense because everybody’s playing their rear end off.

Q: What’s it like playing for coach Shann Schillinger, a guy you looked up to as a kid?

A: He’s great as a coach. The best part about him is recently he’s been in our shoes, especially at this program, so he’s got more of an insight on the players’ perspective than some of the coaches who haven’t strapped it up in a while, like coach Sacks or coach Pease maybe. But yeah, he’s great. He’s very knowledgeable and smart in the game. It’s a lot of fun playing for him.

Q: Did you always play safety growing up?

A: It’s funny because in high school I played basically everything. Junior, senior year I kind of played a hybrid safety/outside linebacker position. But then I also played some corner when they needed me to. Then I played a lot of offense, too. Some slot receiver, running back, quarterback if they needed me. Really anywhere I was needed.

A: I loved it. It was fun. I liked being back there, kind of running around and all that. Yeah, I thought it was fun.

Q: Were you more of a pocket passer or runner?

A: A little of both. Make one read, and if it’s not there, I might take it outside and look to dish it off or tuck it and run.

Q: Some fun ones to close. Who’s your favorite NFL team?

A: Eagles without a doubt because uncle Tim (Hauck) played there. My favorite NFL players were all the Montana guys when they were playing. There’s not too many of them around now. I loved watching Colt (Anderson) play, Jordan Tripp, Brock Coyle, all those guys.

Q: If you couldn’t play football, what other sport would you want to play?

A: I’m probably not big enough for basketball. I do like basketball, though. I’m more of that dude that went in to play defense. I’m not very good of an offensive player. Maybe try to be an Olympic lifter or something like that. I’m not very good in that department either, but maybe in my mind.

Q: Who would play Robby Hauck in a movie about your life?

A: I got to go with Brad Pitt. I definitely became a fan of him in "A River Runs Through It." I think he’d be a good Robby Hauck.

A: They just assigned it to me. I said, ‘Great, as long as it fits.’ That’s the only thing I really cared about, as long as it’s not too baggy or too tight.

Q: Final one. What’s it been like playing for Bobby for the first time these past two years?

A: It’s been awesome. I’ve always been around him, his coaching side, and now it’s really fun to be actually coached by him on his team just because of his knowledge of the game and all that. I’ve always respected that side of him and always looked up to that side. It’s really cool to just be coached by him now and learn his ways and how he wants us to perform.