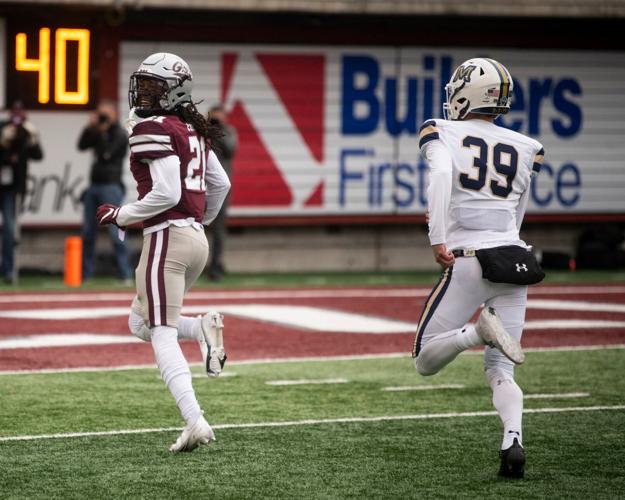 Montana cornerback Justin Ford (21) smiles as he runs back a blocked field goal attempt for a touchdown during the 120th Brawl of the Wild on Nov. 22 at Washington-Grizzly Stadium in Missoula. UM was picked first in the Big Sky preseason poll by the media and coaches, while MSU was tabbed second by the media and third by the coaches. 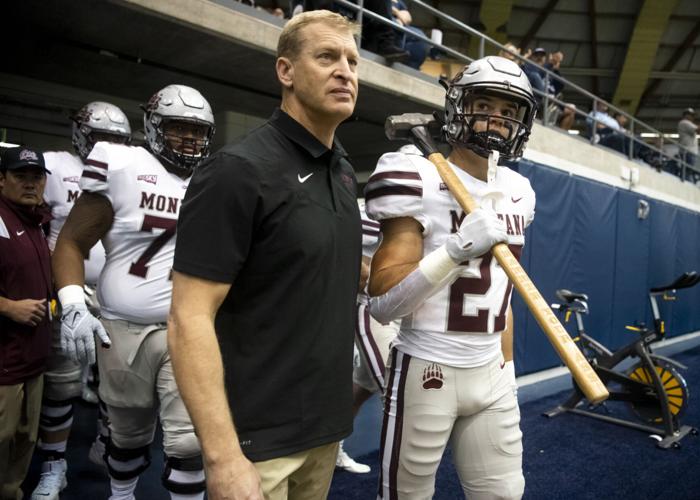 Montana coach Bobby Hauck and cornerback Trevin Gradney prepare to lead the Griz onto the field prior to a Nov. 13 game at Northern Arizona.

SPOKANE — The Montana football team is back on top of the Big Sky Conference — sort of.

The Grizzlies were picked to win the Big Sky by the league media and coaches, the conference announced Monday. It marks the first time since 2010 that they were tabbed as the preseason darlings in either poll.

“It used to be that way year in, year out, so that piece is enjoyable,” Griz coach Bobby Hauck said. “I don’t know if it’s reassuring or whatever, but I am glad that others kind of view us the same way I view us: that we have a good team.”

The voting was razor thin between UM, Montana State and Sacramento State in both polls — and for good reason. All three of those teams earned a seed in the FCS playoffs last season as the Big Sky put a conference-record five teams into the playoffs.

The Griz received 111 points in the coaches poll, Sacramento State tallied 110 and the Cats garnered 109. In the media poll, UM accrued 356 points, MSU had 352 and the Hornets got 335. There was a significant drop to fourth place in both polls.

“I think it’s a reflection of our league,” Cats coach Brent Vigen said. “We were fortunate enough to make it to the championship, but I’m certain there was a couple teams that could have maybe done the same. There’s a lot of competition at the top of our league.”

Montana is coming off back-to-back trips to the FCS playoff quarterfinals entering Hauck’s fifth year and fourth fall season of his second stint at UM. He led the Griz to seven consecutive conference crowns and three national runner-up finishes from 2003-09. That 2009 conference crown is their last official one because their 2011 league title was vacated.

While first place looks good on paper, the Griz will soon have to go out and prove it on the field after being close the past two seasons. Hauck doesn’t foresee being the preseason favorite putting added pressure on the Griz because their internal expectations are already so high.

“I think we’ve got a pretty complete team,” he said. “I think we have a chance to be good in all three phases. I really like the work that our guys have put in from last January to now, especially this summer. I think that’s where great teams get built is the summertime when players have to take ownership in it. And our guys have done the work.”

There are still questions about UM’s offense, and they’ve brought in transfers or received commitments from several transfers on that side of the ball. But it’s the defense that led Portland State coach Bruce Barnum to vote UM No. 1 in his poll.

“I’m breaking them down, and I saw their defense. I saw what they did to Eastern Washington that last playoff game, and they’re talented,” he said. “Their defense is a senior-laden group with a lot of experience. A lot of tradition and they’re playing well right now. I think they’re the ones to chase in the conference.”

While the Cats were third in the coaches poll, they received five first-place votes, compared to four for the Hornets and three for the Griz. In the media poll, UM led with 14 first-place nods, but MSU was right behind with 13, while Sacramento State got four and UC Davis got one.

It’s not just the conference poll in which UM and MSU are highly ranked. They were third and fourth in the Hero Sports and Athlon Sports preseason Top 25 polls. That they’re both highly competitive on the national stage at the same time is exciting for Cats coach Brent Vigen.

“I think they’re our daily competitor,” he said. “I say that because I think we both drive each other. I think that’s a good thing. We’re in a state where you’re on one side of the fence or the other, and there’s probably not a whole lot of people that aren’t real interested in either side. When you have that and both programs are invested, that daily competition should drive you.”

MSU garnered the most selections on the preseason all-conference team with seven players, three of whom are on offense, two on defense and two on special teams. Sacramento State had five honorees to tie UM for the second most.

The Hornets have won back-to-back Big Sky titles under coach Troy Taylor but have then lost in the first round of the playoffs. Taylor isn’t too concerned with his team’s ranking; they’ve won the league while being picked fifth and 12th in the media polls and fifth and 11th in the coaches polls.

“I think in general this conference is pretty deep,” he said. “Anybody can beat you. Got a lot of respect. Great coaches. Tough places to play. It’ll be challenging. There’s always teams that emerge that you didn’t necessarily expect.”

Weber State, which has won or shared four of the past five Big Sky titles, checked in at No. 4 in both polls. UC Davis was picked fifth and Eastern Washington sixth after they both were playoff qualifiers last season.

In the bottom half of the polls, Northern Arizona was selected seventh in both. Idaho was eighth in the coaches poll and ninth in the media poll, while Portland State was picked eighth by the media and ninth by the coaches.

Cal Poly checked in at 10th in both polls. Northern Colorado and Idaho State were tied for 11th in the coaches poll, while UNC took took 11th in the media poll and ISU 12th.

Chris Citowicki has led Montana to five combined Big Sky titles and three trips to the NCAA tournament in his first four seasons as an NCAA Division I head coach.

Montana and North Dakota State are the only teams with multiple nominees on the 35-player list.

Mack Konig played her high school basketball in Washington and Canada and will be a member of the Lady Griz this fall.

The Griz will play three of the top four teams in the Big Sky preseason polls — and they have to go on the road for all those games.

Four of the five players were recognized with first-team honors.

The Montana football team will debut at home on Sept. 3.

Marcus Welnel is the 16th player to wear the No. 37 legacy jersey since the tradition started in 1983.

Montana cornerback Justin Ford (21) smiles as he runs back a blocked field goal attempt for a touchdown during the 120th Brawl of the Wild on Nov. 22 at Washington-Grizzly Stadium in Missoula. UM was picked first in the Big Sky preseason poll by the media and coaches, while MSU was tabbed second by the media and third by the coaches.

Montana coach Bobby Hauck and cornerback Trevin Gradney prepare to lead the Griz onto the field prior to a Nov. 13 game at Northern Arizona.