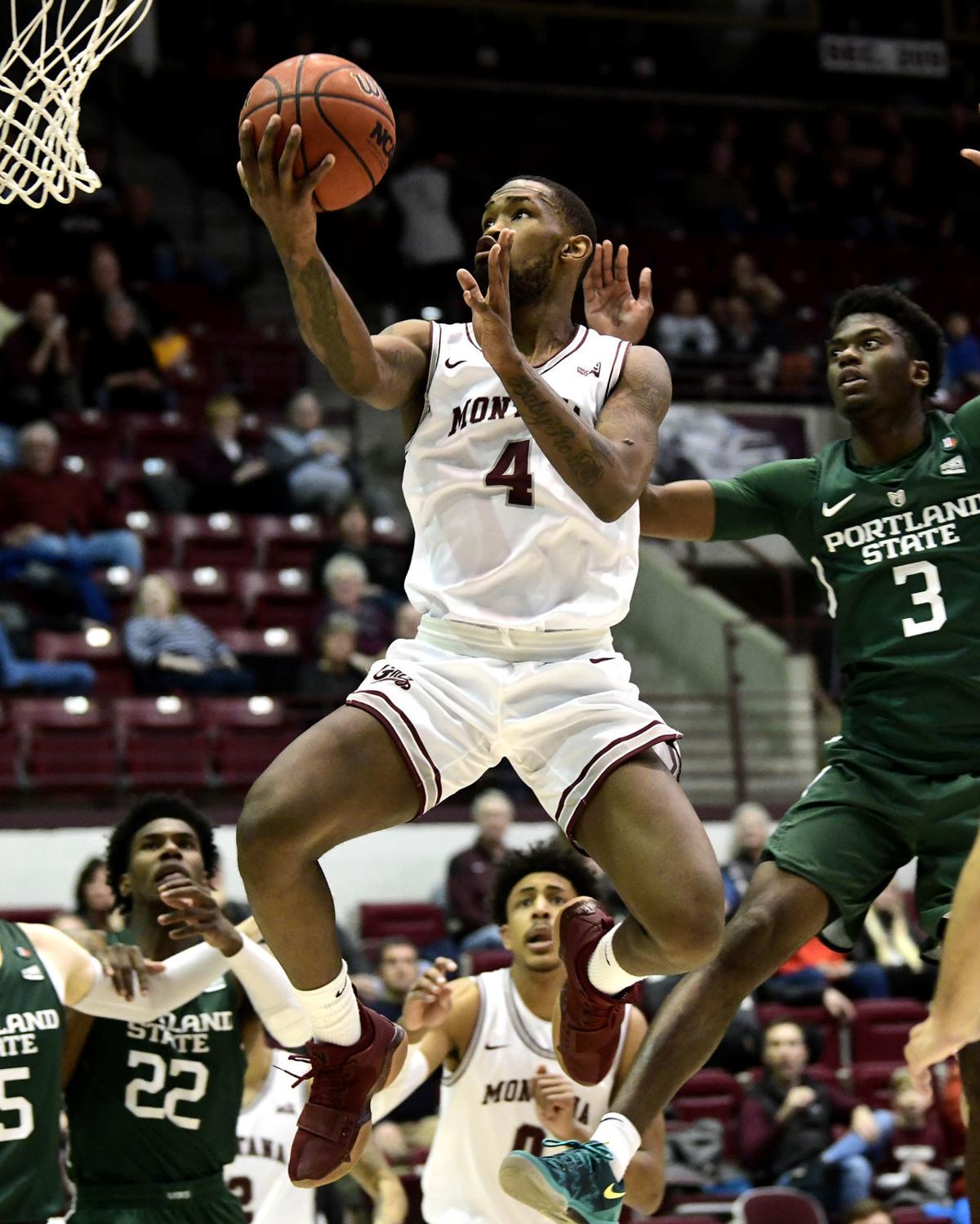 Montana's Sayeed Pridgett (4) drives to the basket for a layup past Portland State's Rashaad Goolsby (3) during their game at Dahlberg Arena on Monday night. The Griz defeated the Vikings, 85-70. 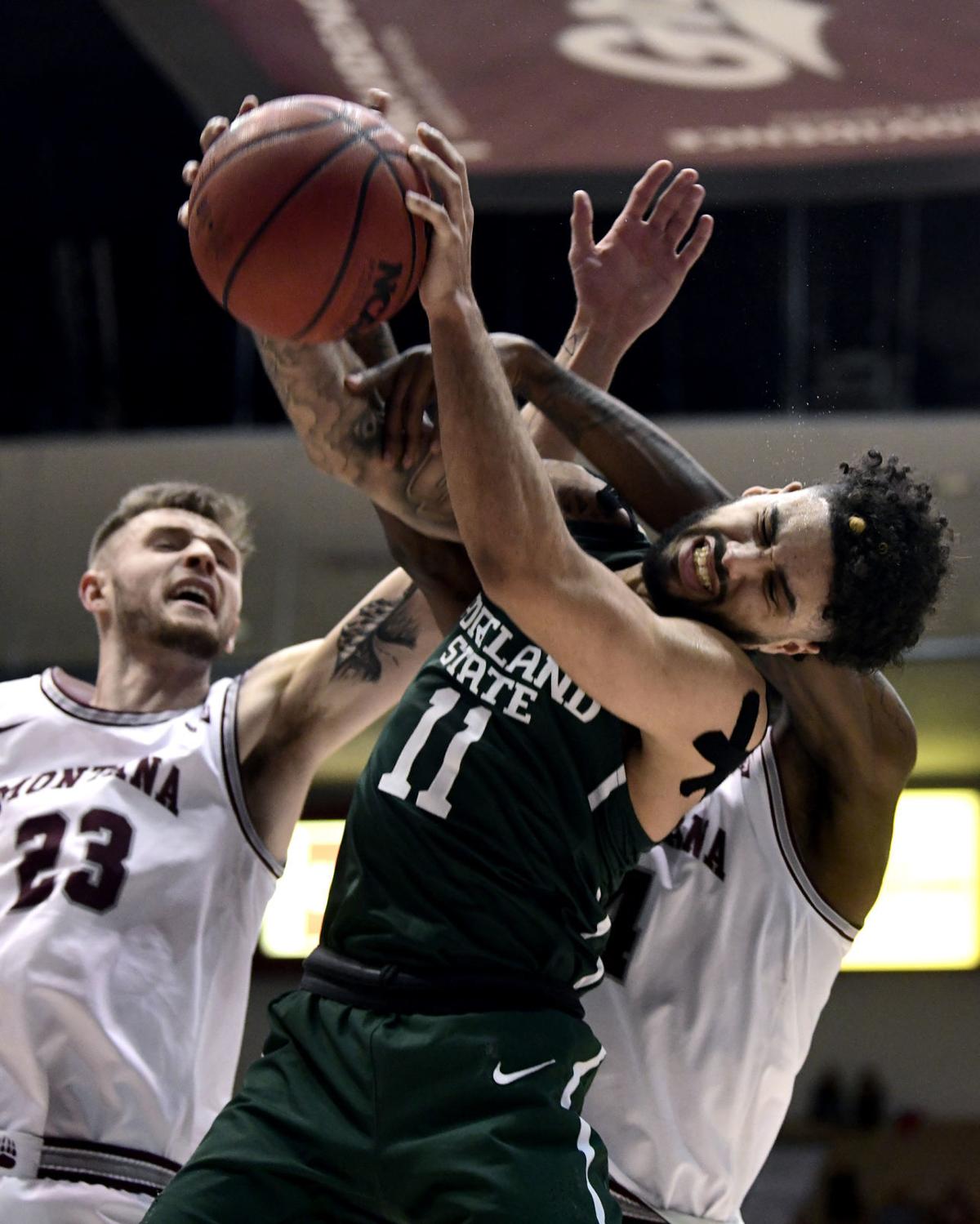 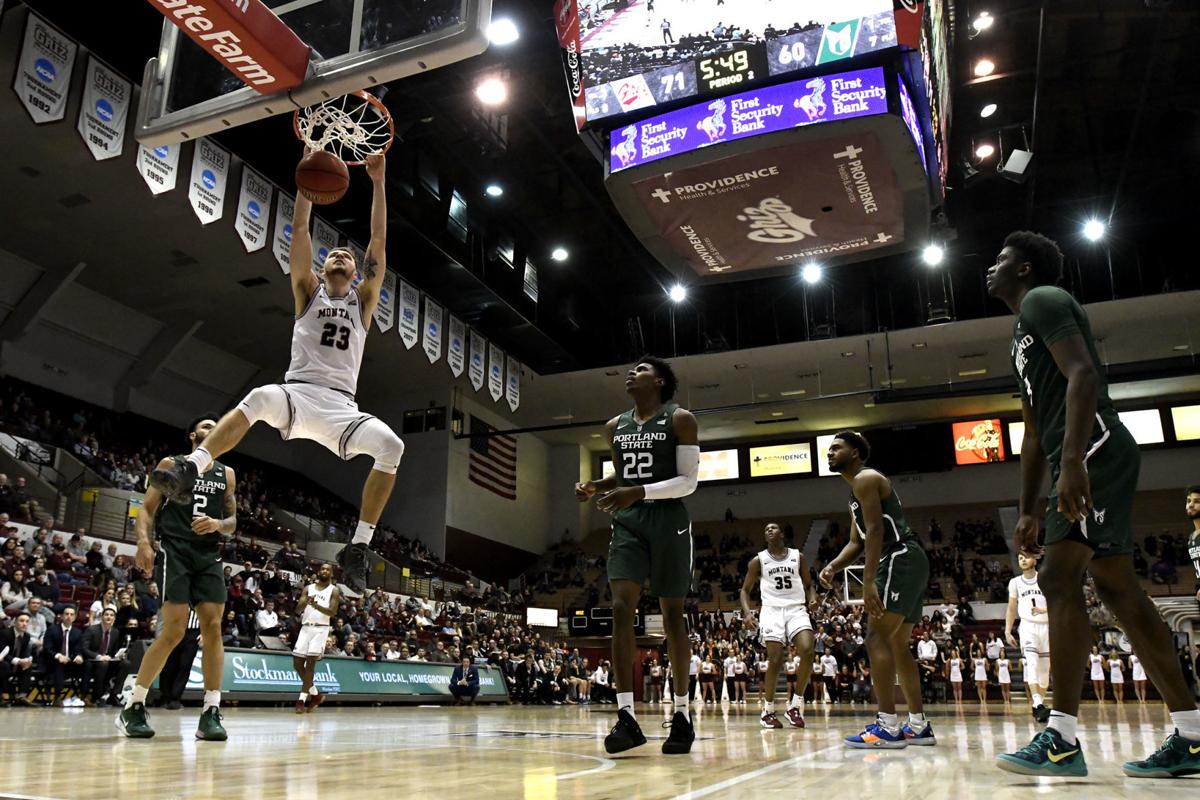 Montana's Sayeed Pridgett (4) drives to the basket for a layup past Portland State's Rashaad Goolsby (3) during their game at Dahlberg Arena on Monday night. The Griz defeated the Vikings, 85-70.

MISSOULA — At least for one night, Missoula can take the title of Lob City.

Mack Anderson and DJ Carter-Hollinger each threw down a pair of massive dunks as Montana’s offense exploded for the second straight game with an 85-70 win over Portland State on Monday night at Dahlberg Arena.

Senior Montana swingman Sayeed Pridgett had three of the lob assists, finishing with 17 points, eight rebounds and 10 assists in a near triple-double.

“It was great, it boosts their confidence to another level where we need to be,” Pridgett said of the slams. “Obviously they’re younger guys and haven’t played much in the past … they’re having fun and the hoop is getting big.”

Pretty sure D.J.'s head was above the rim on the one! pic.twitter.com/T1UjayIQSg

The Grizzlies certainly had no issue scoring against the Vikings, shooting a blistering 60.4% from the field, the best percentage Montana has shot in a game this season.

Montana led 46-42 at halftime and Portland State closed the gap to two points midway through the second half. The Grizzlies, however, answered with a 15-4 run over the next 6:02 to take control of the game.

Carter-Hollinger punctuated the run with a thunderous dunk off an assist from Sayeed Pridgett to give the Grizzlies a 67-58 lead. Pridgett had a contested triple during the burst, while Kendal Manuel found the bottom of the net on a deep perimeter shot as well.

Montana got the lead all the way up to 19 points before the Vikings chipped away toward the end of the contest. Carter-Hollinger finished with 13 points, four rebounds and two blocks for Montana.

Inside out, back inside to Mack Anderson!

The lead is up to a game-high 13! pic.twitter.com/DYmRZWpINy

“Guys love to finish plays and we have great passers in those situations,” Montana head coach Travis DeCuire said. “When you’re being pressed it increases those opportunities in that situation. I think for us it’s a sign of our selflessness in terms of the fact Timmy (Falls) and Sayeed (Pridgett) both could have shot those balls and delivering to guys that are busting their butts at the other end is huge.”

Portland State was down shooting guard Matt Hauser and center Sal Nuhu, both dealing with injuries. Hauser, who sprained his ankle ahead of the Montana State game, missed his second straight contest.

Down two players, Portland State went away from its press early in the game, instead settling on full-court man-to-man pressure for long stretches. Montana broke through the defense with relative ease and limited its turnovers, committing 12.

“They made a real good run, I felt we ran out of gas a little bit,” Portland State head coach Barret Perry said. “Second game on this trip, I thought they were a little better rested, which was obvious. And so we needed to answer, but we were missing a couple guys as well … you need all those bodies to win big games.”

The Vikings, who were making an average of 6.6 treys per game heading into the contest, were held without a make from behind the arc for the first time this season. Portland State shot 26 of 64 from the field and 0 for 11 from the 3-point line.

Another slam for Mack Anderson! The sophomore has Montana's last 8 points! pic.twitter.com/mqpFfuxF9s

Manuel had 27 points for the Grizzlies on 7 of 11 shooting and now has 88 points over the past four games. He is shooting 64% from the field during the stretch and hit five 3-pointers against the Vikings.

“I just feel more confident. After nonconference me and (Coach) Travis had a good film session and I just found my spots where I’m able to score better,” Manuel said. “I’ve just been staying in my element out there, getting to my spots on the floor and just taking good shots.”

The win moved Montana’s Big Sky record to 5-1. At 9-8, Montana is over .500 for the first time this season and remained at the top of the conference. Portland State dropped to 8-10 with a 2-4 mark in the Big Sky.

“You want to get off to a good start. One of the things is that we want to remind the guys is that we’ve been 4-1 before and that was our worst season,” DeCuire said. “For us, we want to treat it like we’re behind in the standings and playing like you’re behind and maintaining your focus.”

NOTES: Freshman guard Josh Vazquez played 12 minutes with a brace on his left shoulder … DeCuire said of Vazquez “It’s huge, we’ve had guys play through illness and injury and I think a lot of adversity has set in on us.” … Mack Anderson had 10 points and two blocks in 21 minutes … Montana shot 9 of 20 from behind the 3-point line.