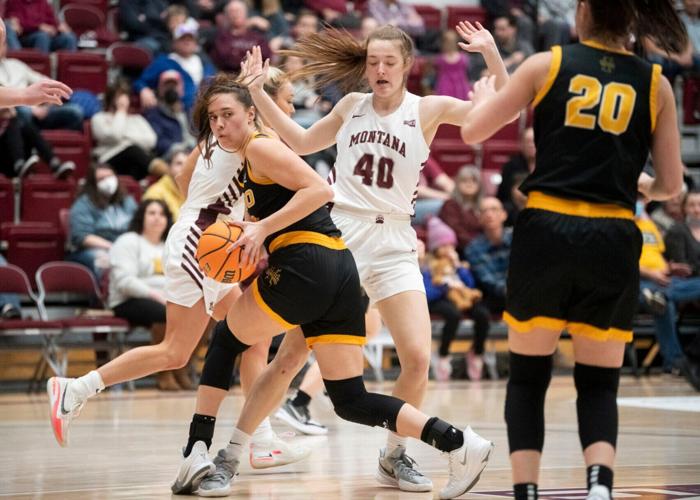 Idaho’s Louise Forsyth, left, looks to pass against Montana’s Dani Bartsch, right, during a game Thursday night at Dahlberg Arena. Idaho led 39-38 at halftime. For a full recap, analysis and photos, log onto missoulian.com or see Saturday's edition of the Missoulian. 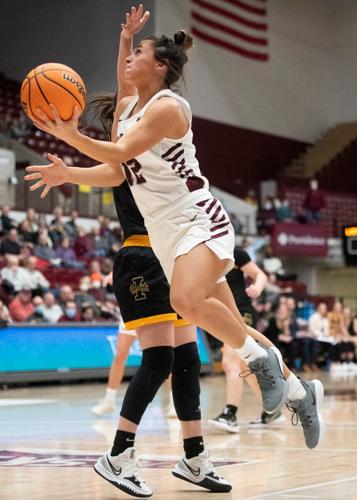 Montana’s Kyndall Keller drives to the basket past an Idaho player during Thursday's game at Dahlberg Arena. Keller scored a season-high 16 points in a 76-73 win.

MISSOULA — Sophia Stiles shot the ball more Thursday night than in any other game this season.

Stiles scored a career-high 27 points in leading the Montana women's basketball team to a thrilling 76-73 home win over Idaho in front of 2,309 fans. The Lady Griz snapped a two-game skid in improving to 8-6 in Big Sky Conference play and 15-8 overall.

"I told Sophia the last few days, 'You're going to have to be aggressive for us,'" said Montana coach Brian Holsinger, who was without his leading scorer, injured guard Sammy Fatkin, for the fourth straight game. "I was proud of her. I put the pressure on her and she stepped up."

Stiles, a redshirt senior point guard from Malta, was 12 for 21 from the floor and 3 for 3 from behind the arc. Teammate Kyndall Keller, a sophomore guard from Havre, enjoyed her best Big Sky Conference game, tallying 16 points on 6-for-11 shooting off the bench.

"Kyndall (Keller) stepped up big," Holsinger said. "Credit to her, and she's defending like crazy. We have to have people step up off our bench. You have to have that kind of effort."

Senior Carmen Gfeller posted a double-double for Montana (11 points, 10 rebounds) and was the hero late. With her team clinging to a 72-71 lead, she came up with a critical steal off a bad pass by Idaho's Paris Atchley with 4.8 seconds left.

Thursday's game featured 14 ties and 21 lead changes. The most important bucket came from Stiles with 2:05 left because it gave the Lady Griz a 72-68 lead and put the Vandals in desperation mode.

"We picked a bad time to go cold from three," Idaho coach Jon Newlee said. "I think we were 1 for 17 in the second half from three and they were the same looks we were making in the first half and the kids I want shooting them.

"Obviously a couple of those go in and it's a different ball game. But you know, Stiles had a great game. I thought she played extremely well. They had some other players step up. It was a tough, physical game on both ends and it could have gone either way."

Stiles was the catalyst in helping the hosts build a 13-8 lead early, scoring 10 points on 4-for-4 shooting with two triples. Idaho settled in and used nine points by Sydney Gandy to knot the score at 20-20 heading into the second frame.

The second quarter was back-and-forth and it looked as though Montana was going to head to halftime with a lead after Kylie Frohlich hit a bucket at 1:47 to give the hosts a 38-34 advantage. But the Vandals finished the half with a 5-0 run, sparked by Tiana Johnson's triple, and took a 39-38 edge into intermission.

The third quarter was back and forth, and Montana emerged with a 56-54 lead thanks to a Stiles 3-ball with 29 ticks left in the period. Stiles totaled 23 points through the first three frames, hitting 10 of 15 shots from the floor. It helped make up for Montana's 14 turnovers and set the stage for the crowd-pleasing finish.

"It definitely helps boost our confidence a little bit," said Keller, whose team traveled to Portland on Friday for a game at Portland State Saturday. "We just have to keep fighting.

"We came out with an energy and an urgency tonight. We wanted to win. We love playing in Dahlberg Arena in front of our fans. It's a huge win."

On Saturday, Montana will likely be without Fatkin (ankle) again. She did not even take part in pregame warm-ups Thursday night.

The Lady Griz may not need her against a Vikings team that has lost 11 in a row and has endured the postponement of eight games since Dec. 30. Portland State lost at Northern Colorado by a whopping 48 points on Feb. 7 and in the Viks' most recent game, on Thursday night, they dropped a 94-66 decision at Northern Arizona.

"No excuses, for us. We didn't execute or match their intensity early," PSU coach Chesley Gregg said after the loss. "We have to clean up turnovers and rebounding, no question. Back to work Friday to prep for the next one."

Photos from the college womens basketball game between the Lady Griz and Idaho at Dahlberg Arena, Thursday, Feb. 17, 2022.

Idaho’s Louise Forsyth, left, looks to pass against Montana’s Dani Bartsch, right, during a game Thursday night at Dahlberg Arena. Idaho led 39-38 at halftime. For a full recap, analysis and photos, log onto missoulian.com or see Saturday's edition of the Missoulian.

Montana’s Kyndall Keller drives to the basket past an Idaho player during Thursday's game at Dahlberg Arena. Keller scored a season-high 16 points in a 76-73 win. 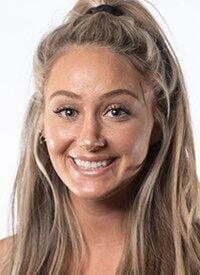 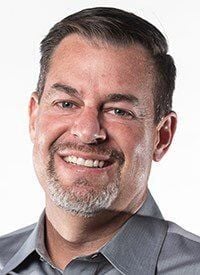