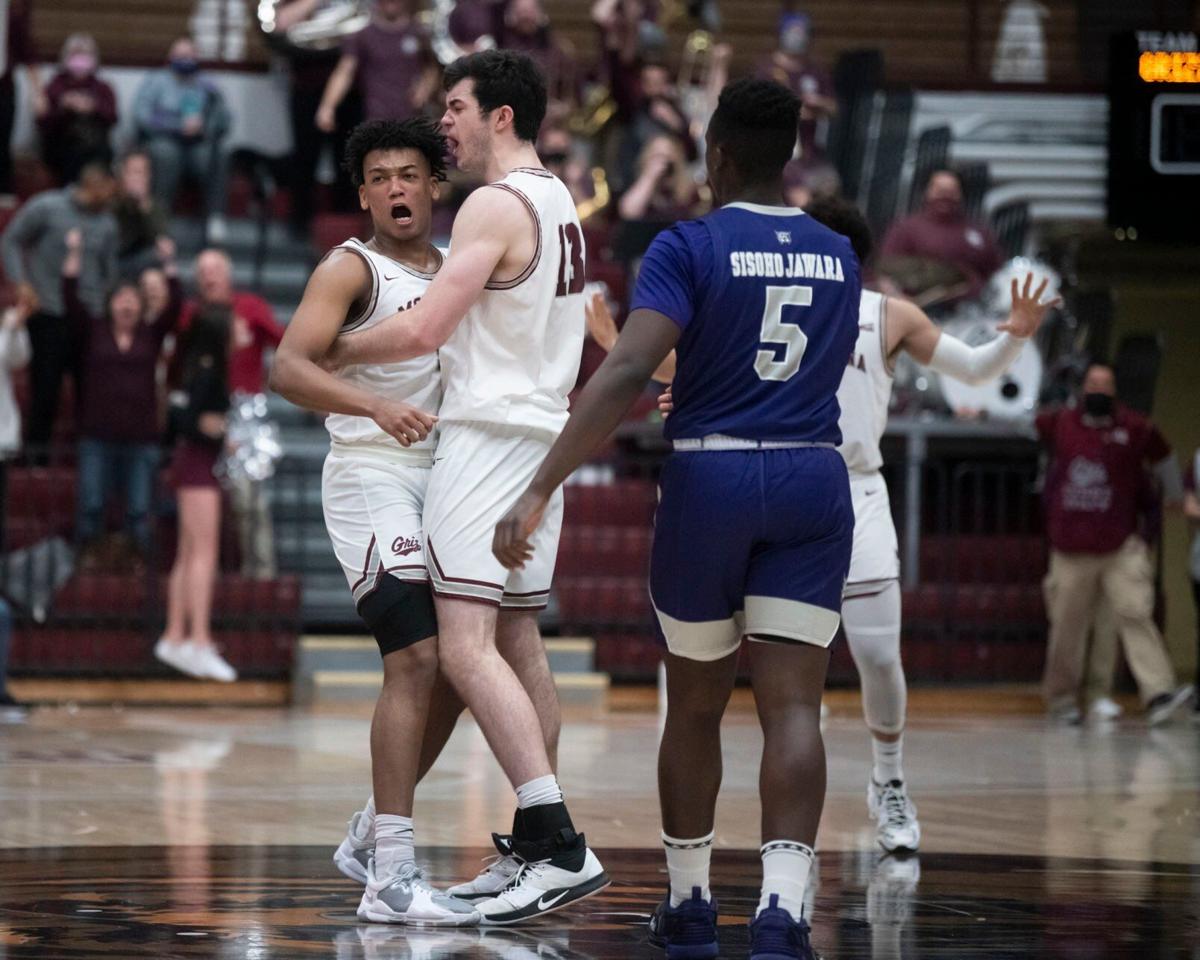 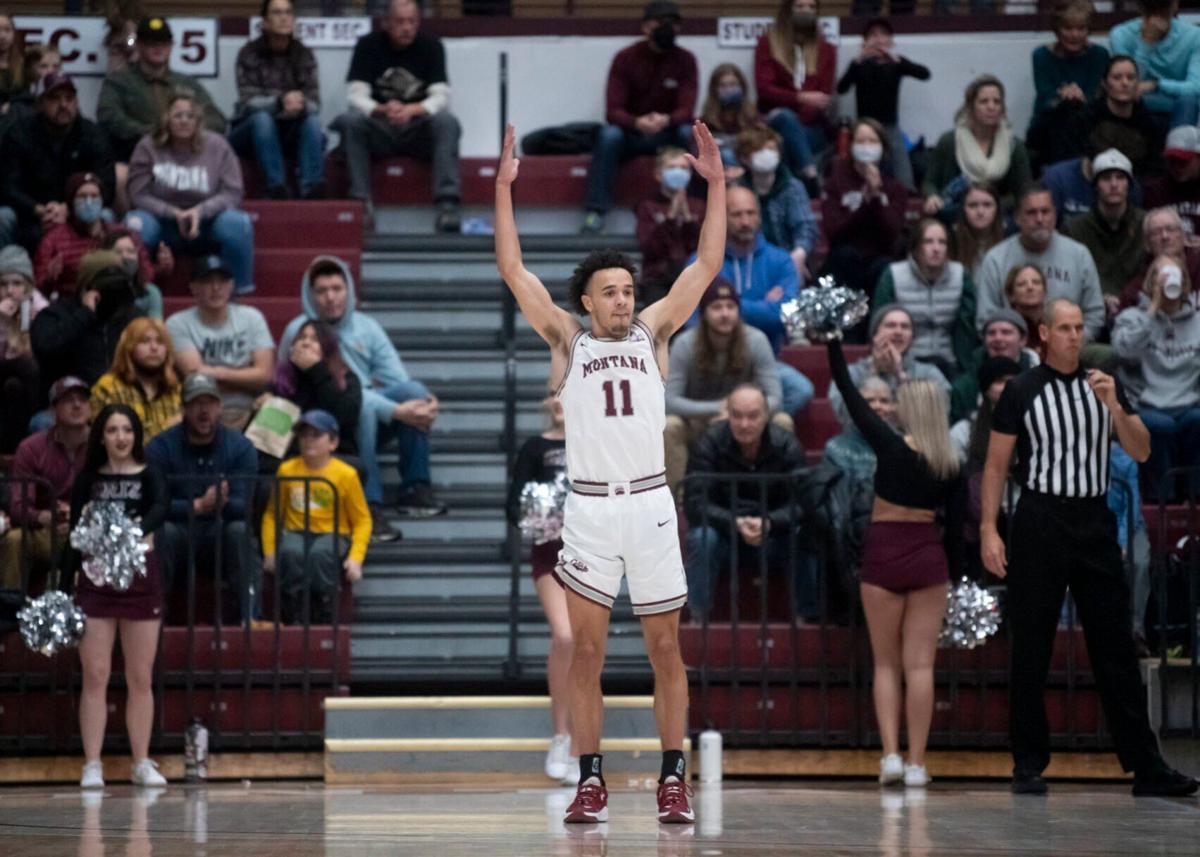 Montana’s Cameron Parker pumps up the crowd during Saturday's win over Weber State at Dahlberg Arena.

MISSOULA — Coming from the junior college level, playing in his first season at the Division-I level, Montana Grizzlies wing Lonnell Martin Jr. had never played in an environment like Saturday's game against Weber State.

Plus, the first-year Grizzly was the hero of the game.

Martin made a back-door cut on Weber State's JJ Overton, took a pass from teammate Cameron Parker, jumped and turned in one motion to bank in a go-ahead bucket with seconds left and seal a 74-72 win over Weber State at Dahlberg Arena.

"This is my first time experiencing an arena like this with the fans," Martin said, relishing in the electric environment brought by the 3,409 fans in Missoula.

The Grizzlies and Wildcats entered the final minute tied at 72. No one had scored since the Wildcats hit four answered — including a bully ball post up by forward Dillon Jones on Martin to knot things up.

Overton found room on a drive against Derrick Carter-Hollinger who contested enough for a stop to give the Grizzlies the chance they needed with just over 30 seconds on the clock.

Montana drained the shot clock down to 10 seconds and patiently tried to get into a set play out of a timeout. Parker hit Josh Bannan, but he flipped it right back to Parker on the wing after Bannan drifted to the deep corner with the clock ticking down.

The play was supposed to be a post up for Bannan down low, so the Grizzlies had to freelance it from there.

Parker took one dribble and saw Martin had gotten behind Overton who was caught staring down Parker.

Parker threw an over-head dart to Martin who caught, turned to his right and banked in a shot from the right block all in one motion to give Montana the go-ahead score with seconds remaining.

As good as the shot was, the look from Parker, who finished with eight assists off the bench, and recognition in the tense moment that Martin had made the right cut on a broken play was just as good.

"We put Cam in for a reason," Grizzlies head coach Travis DeCuire said. "Plays break down. The play doesn't always work. ... Cam is usually the guy who can find that guy. ... They switched, which is why Lonnell was open at the basket and he found him."

Weber State's last-second shot to win it was a solid look by Dyson Koehler but it didn't fall.

Koehler had a great look but misses. Grizzlies with a massive early Big Sky win to get to 10-5, 3-1 in league play and hand Weber its first league loss. #mtscores pic.twitter.com/b7nOw35atf

The game between the powers of the Big Sky was billed as a chance for Montana to cement itself early on in the standings against a Weber State team that was scoring almost at will on teams.

Just over a month ago, the Grizzlies fell in a tight and exciting road game at Northern Colorado in their second league game. Montana lost that one, the second game at the time Montana had lost in the final few possessions.

This time around, the Grizzlies hung on. The home crowd helps, but the team showed more maturity and grit with answers late against a good team. Sure, Weber State got its points and hit the shots expected of a team that leads the league in field-goal shooting percentage.

But Montana had answers for those makes, and timely stops.

Weber State snapped a 5-0 Montana run to tie it off a Koby McEwen jumper. But the Grizzlies had answer in the form of a Bannan steal and coast-to-coast layup.

Jones canned a deep 3-pointer for another lead, but the Grizzlies had another answer in the form of a Brandon Whitney layup.

It came down to grit, loose balls and some strong late-game play by the maturing Grizzlies who held Weber State scoreless over the final two minutes.

Notes: Robby Beasley III led Montana in scoring with 19 points, including nine points and three 3-pointers in the second half. ... Josh Bannan recorded his second double-double in a row with 13 points and 10 rebounds. ... Montana went 10 of 19 from 3, hitting at least 10 treys for the fourth time this season. ... Forward Scott Blakney remains out with a right wrist injury. ... The Big Sky Conference did not announce any updates to its COVID-19 policies, despite sharing in an email the league expected an announcement "by the end of the week."

Montana’s Cameron Parker pumps up the crowd during Saturday's win over Weber State at Dahlberg Arena.