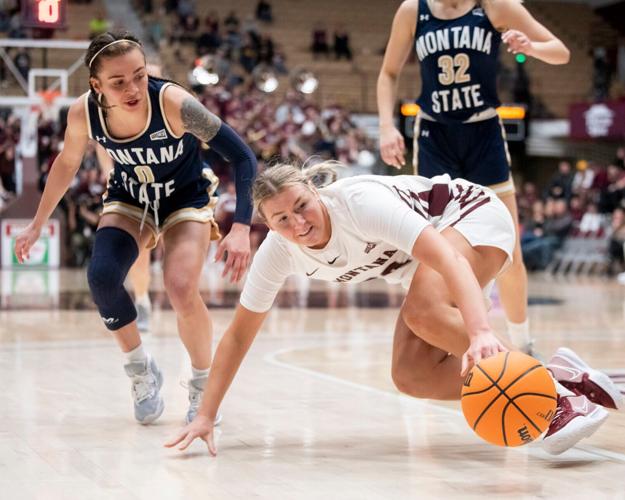 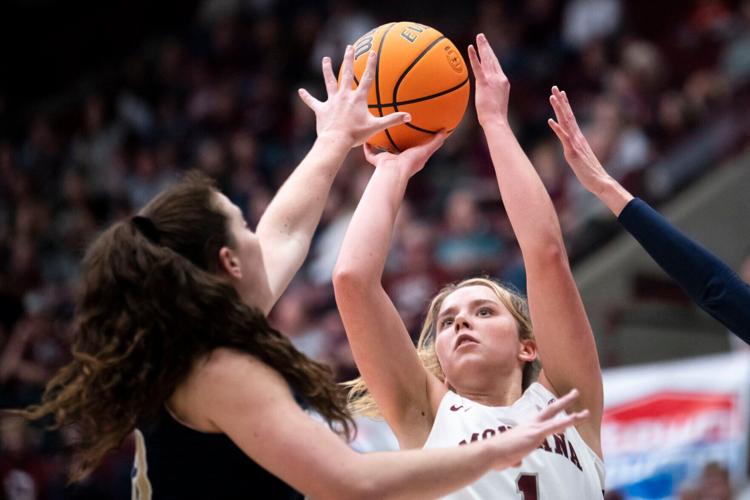 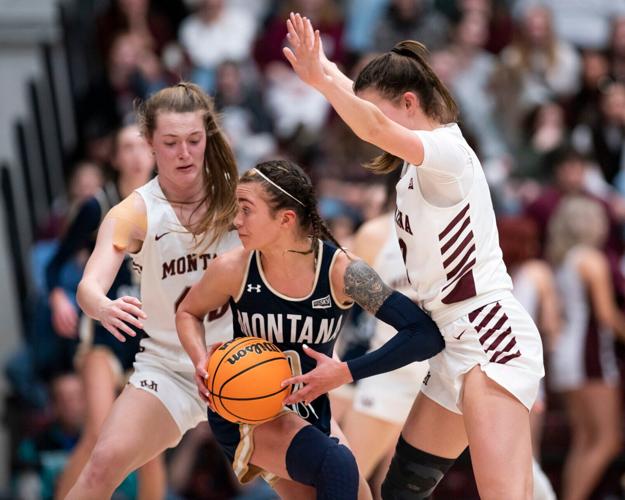 MISSOULA — Montana State seniors Darian White and Kola Bad Bear sure went out in style Saturday if the rivalry game against Montana was in fact their final game at Dahlberg Arena.

White, a guard, scored a game-high 22 points, her second most this season, to go with seven rebounds. Bad Bear, a forward and Billings Senior grad, added 13 points and seven boards after coach Tricia Binford challenged her team to stay together and control what they could in front of an announced crowd of 3,504 fans.

Those two seniors, who have the option of a COVID year of eligibility too, paced the way in a game that was decided in the third quarter when the Cats outscored the Lady Griz 25-14. It was the reverse of last year’s third-quarter collapse by MSU, which won 72-63 this time.

The Cats improved to 13-7 overall and 6-2 in the Big Sky as they pushed their winning streak to four games. The Lady Griz dropped to 8-11, 4-4 as they lost for the second time in two home games this week.

“That was one of the most composed teams in Dahlberg that I’ve coached and we’ve had a lot of good teams over the years,” Binford said. “I felt like we responded every time.”

The juniors also stepped up big for the Cats, showing that the cupboard won’t be bare next year if White and Bad Bear move on to other things. Forward Lexi Deden, a Missoula native, scored eight points and matched the team high with seven rebounds, including three offensive boards as she cleaned up the glass to score second-chance points.

Guard Grace Beasley matched Bad Bear with 13 points to go along with a team-high three assists off the bench in 20 minutes. While she’s new to the rivalry, she was previously in the Pac-12 at Washington and has came through in big games, like against LSU this year.

“Her poise is something that helps us all, especially her being older and experienced going to these other programs and playing there, she’s bringing that,” Bad Bear said. “She has a lot of intelligence that just helps us feel relaxed and calm in these moments.”

While the Cats showed their veteran status, UM’s youth movement was on display. Freshman Libby Stump led the way with 21 points and freshman Mack Konig added 20 points. They combined to go 8 of 12 on 3-pointers, while the rest of the Lady Griz were 2 of 15.

UM seniors Carmen Gfeller and Sammy Fatkin and junior Gina Marxen combined to shoot 4 of 22 from the field while committing 11 turnovers. Gfeller, who was honored for reaching 1,000 career points before the game, had two points on 0-of-4 shooting from the field in 24 minutes.

“You can’t be a reluctant shooter against teams that want to help like they do, and we had a few people that were a little reluctant tonight,” UM coach Brian Holsinger said, adding: “The people who didn’t play well didn’t play the way we wanted them to play, and that’s without fear and just ready to knock it down.”

MSU jumped up 18-8 by scoring 12 points in the paint and posting a 9-5 edge on the boards, including 4-1 on the offensive glass as Deden converted two offensive rebound put backs. The Lady Griz closed the quarter on an 8-0 run powered by two 3-pointers by Stump, giving them a 9-0 edge in points beyond the arc as they pulled within 18-16 to end the frame.

“Her hustle plays, her offensive rebounding, the aggressiveness, the disruptiveness, she brings a lot to the table and we needed that,” Binford said of Deden. “It’s an environment that you can’t come in timid. You’ve got to come in attack-minded and you’ve got to respond to what they do.”

White snapped UM’s 10-0 run with a corner 3-pointer and scored 11 of her 15 first-half points in the second quarter as she found floaters in the lane. Stump and Konig combined to go 5 of 6 on 3-pointers in the first half, but Gfeller was held scoreless in five minutes while dealing with early foul trouble as the Cats took a 37-35 halftime lead after a quarter with eight lead changes.

“She’s a senior and she hit big shots,” Holsinger said of White. “We made her take the shots we wanted her to take. She’s a good player and she made the plays as a senior. You’ve got to take your hat off to her at some point.”

MSU opened the third quarter on a 9-0 run and pushed its lead to 19 points, 60-41, before UM scored its first field goal of the quarter with 1:12 left. At one point, the Lady Griz had seven turnovers and six field goal attempts in the third quarter.

They shot 3 of 9 from the field as the Cats worked to control the dribble penetration to prevent kick-out 3-pointers. Gfeller had two point-blank misses while being defended physically by Bad Bear and the active forwards after scoring a career-high 34 points in this game last year.

“Our seniors got to play better for us to be effective. These guys (Stump and Konig) are young, they’re going to give us a great thing. But we got to get better stuff out of your seniors to win in a game like that.”

Gfeller scored her first points on a pair of free throws with 8:16 left in the game to cut MSU’s lead to 64-51. The Lady Griz trimmed the lead to nine points three times but could never get any closer.

“In an atmosphere like this,” White said, “playing together as a team and staying relaxed, staying composed is a huge thing that I think we did very well tonight.”

"I always tell her, ‘I’m so glad I don’t have to play against you.’" MSU point guard Darian White

“At this time last year we were on a big roll (going into Missoula) ... and they were ready to play and we weren’t." MSU forward Great Osobor

Montana State has beaten the Lady Griz in seven of their last eight meetings. But Montana blew out the Cats last February in Missoula. What will happen Saturday?

Only the Montana State women will enter Saturday's Cat-Griz games coming off a win.

The Bobcats will leave Missoula with a win for the first time since 2010 and complete the Brawl of the Wild sweep Saturday.

This episode plays sound from the Cat-Griz basketball postgame press conferences and talks about some recent football and volleyball news.