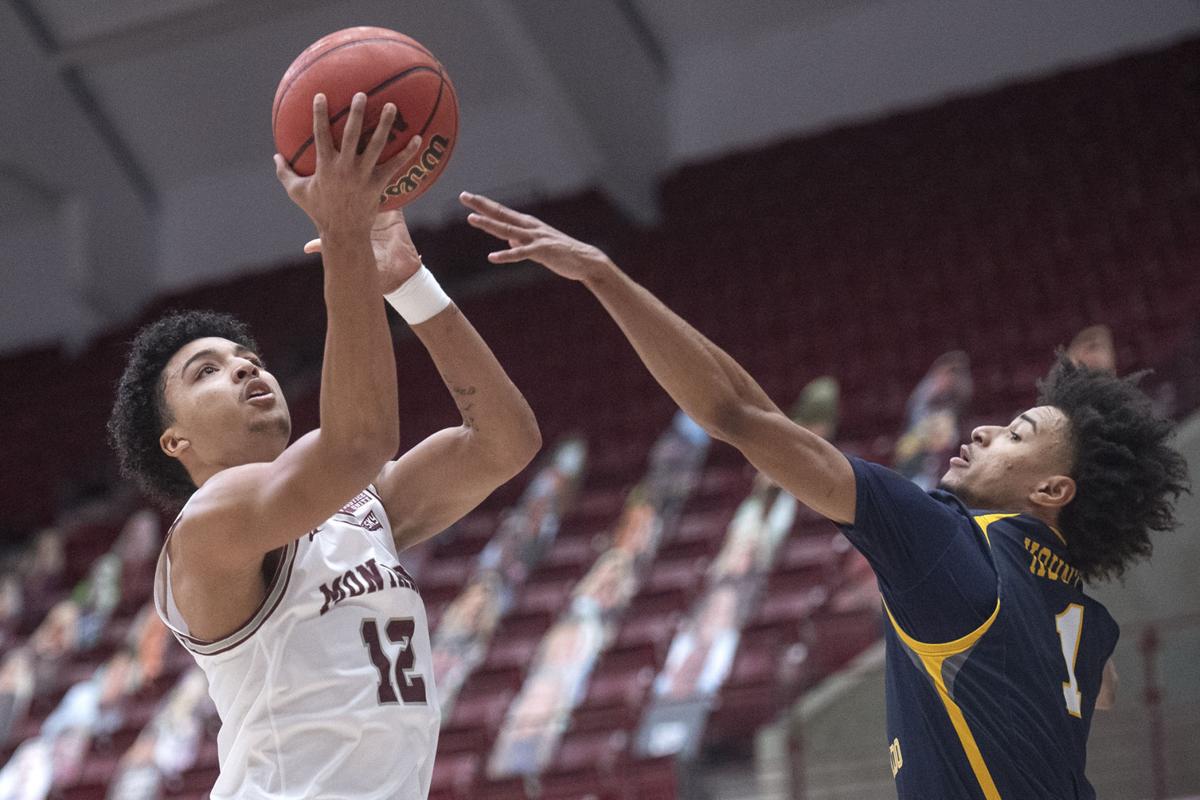 Montana guard Brandon Whitney (12) shoots over Northern’s Daylen Kountz in the first half of Saturday's game at Dahlberg Arena. The Grizzlies lost, 64-62. 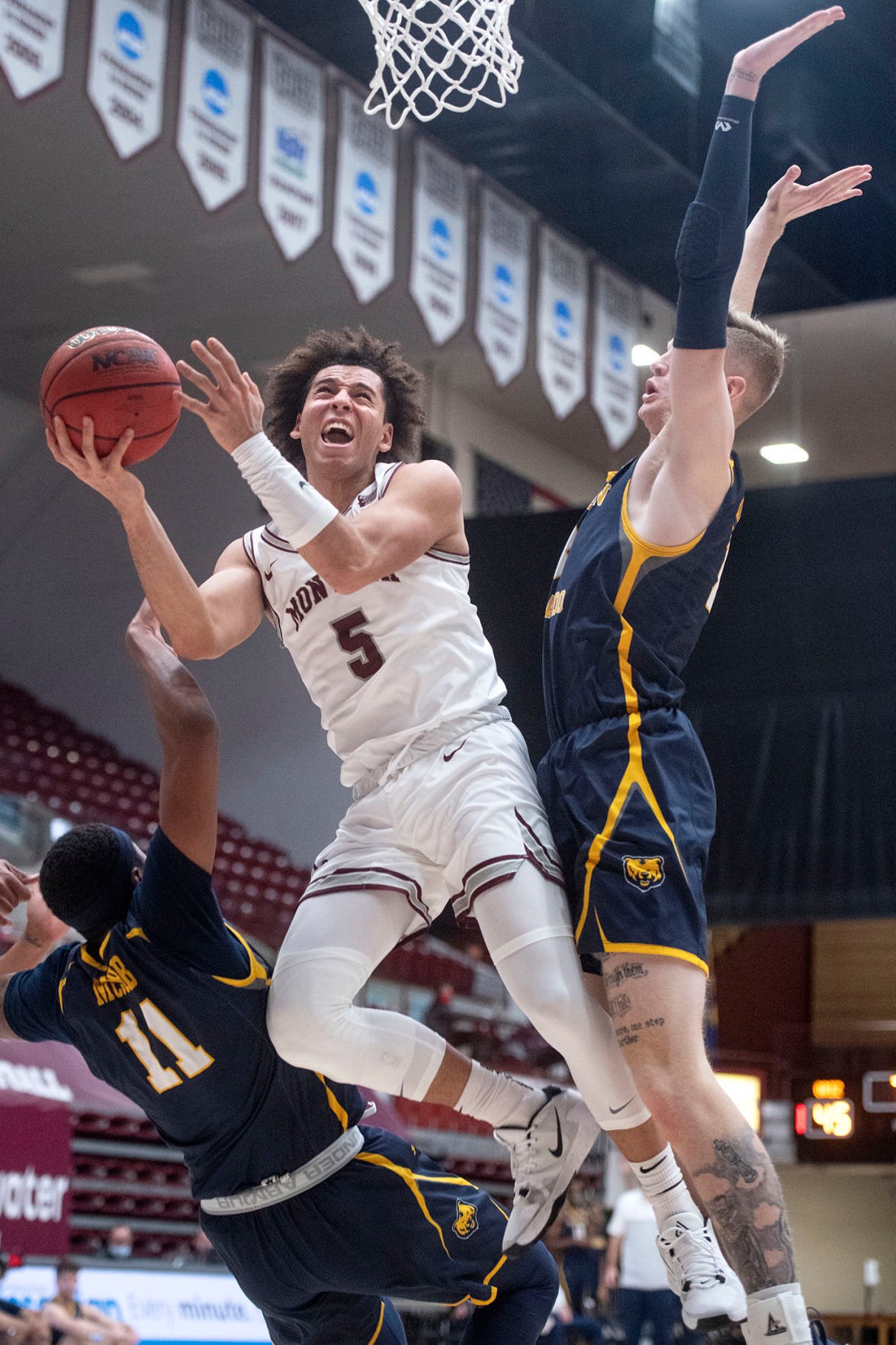 Montana guard Robby Beasley (5) gets fouled under the rim. The freshman lead the Grizzlies in scoring, with 12 points during Montana’s 64-62 loss to Northern Colorado on Saturday in Dahlberg Arena.

MISSOULA — Josh Bannan was on the court by himself putting up shot after shot following Montana's 64-62 loss to Northern Colorado on Saturday night at Dahlberg Arena.

The Grizzly forward shot for about 10 minutes, trying to find his rhythm as he pulled up for mid-range jump shots following an off night from the field. Most of them clanked or swished in and perhaps that helped stave off some of the frustration from another close Grizzly loss to a Big Sky Conference opponent.

Montana has lost all three of its league games this year on an opponent's final offensive possession. Those losses have come by a combined four points.

"Trying to figure out how to close," UM coach Travis DeCuire said to open his post game press conference. "You know, we've found ourselves in some really good ball games three, four times this year where it's yours to take.

"We've got some growing up to do in terms of these situations."

Budding freshman star Robby Beasley III fittingly hit three-straight free throws after being fouled on an attempt from behind the arc with 15.4 seconds left to tie the game after Northern Colorado took the lead on a pair of free throws of its own.

It was the only time all evening a Bears player converted all of his free throws after being fouled. UNC struggled at the free-throw line, making just 7 of 17 attempts, while Montana hit 21 of 22 attempts.

Unlike the two Southern Utah losses, however, the game was not decided at the free throw line. In trouble and with the clock winding down, Northern Colorado guard Daylen Kountz — a University of Colorado transfer — was in the air and threw a wild ball to Bodie Hume deep in the post.

Hume somehow came up with the loose ball and threw up a shot around Bannan that rattled in with a second left on the clock. Montana used its final timeout to draw up a play somewhat reminiscent of Christian Laettner's shot for Duke in the 1992 Elite Eight against Kentucky.

The shot technically did not get off before the buzzer and Montana dropped to 3-6 on the year and 0-3 in the Big Sky.

"I think that it is a little indicative of the game, because they came up with way more loose balls than we did," DeCuire said of the wayward pass from Kountz to Hume for the game winner. "You can't win close ballgames if you don't get the ball."

Montana will have a chance to stop its conference losing streak at three games on Monday morning at 9 a.m. when the Grizzlies and Bears are set to face off again.

"The great thing is we play them again," said Beasley, who finished with a team-high 12 points. "So it's a quick turnaround ... we're going to come out Monday and we're gonna play like our backs are against the wall."

There are 17 scheduled games left on the Big Sky slate for Montana and with the coronavirus pandemic having already postponed and canceled many games in the conference already, it only seems to be a matter of time before that affects the Grizzlies one way or another.

Any win counts more this year and Montana knows it. The Grizzlies have to figure out how to find some offense before the final buzzer sounds and the only basketballs going through the hoop are those from a late-night shooting session following another brutal Big Sky loss.

"They all should be angry," DeCuire said. "And (you want them to) be a little more aggressive in their next opportunity to compete."

Watch Now: Members of the 1980 U.S. Olympic Team from Montana

Montana guard Brandon Whitney (12) shoots over Northern’s Daylen Kountz in the first half of Saturday's game at Dahlberg Arena. The Grizzlies lost, 64-62.

Montana guard Robby Beasley (5) gets fouled under the rim. The freshman lead the Grizzlies in scoring, with 12 points during Montana’s 64-62 loss to Northern Colorado on Saturday in Dahlberg Arena.