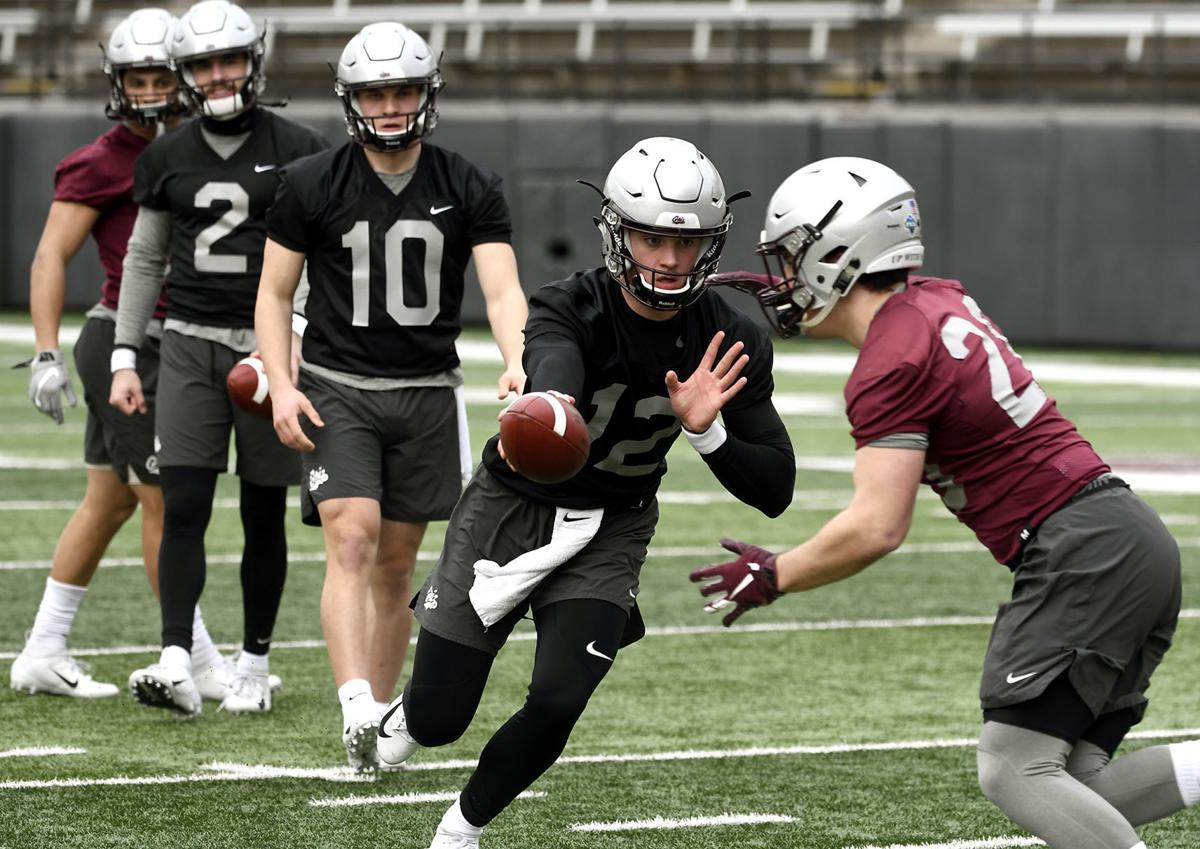 Montana quarterback Kris Brown hands the ball off to running back Nick Ostmo as quarterbacks Cam Humphrey (2) and Robbie Patterson (10) watch on Monday at Washington-Grizzly Stadium. The practice was the first of spring football for the Grizzlies. 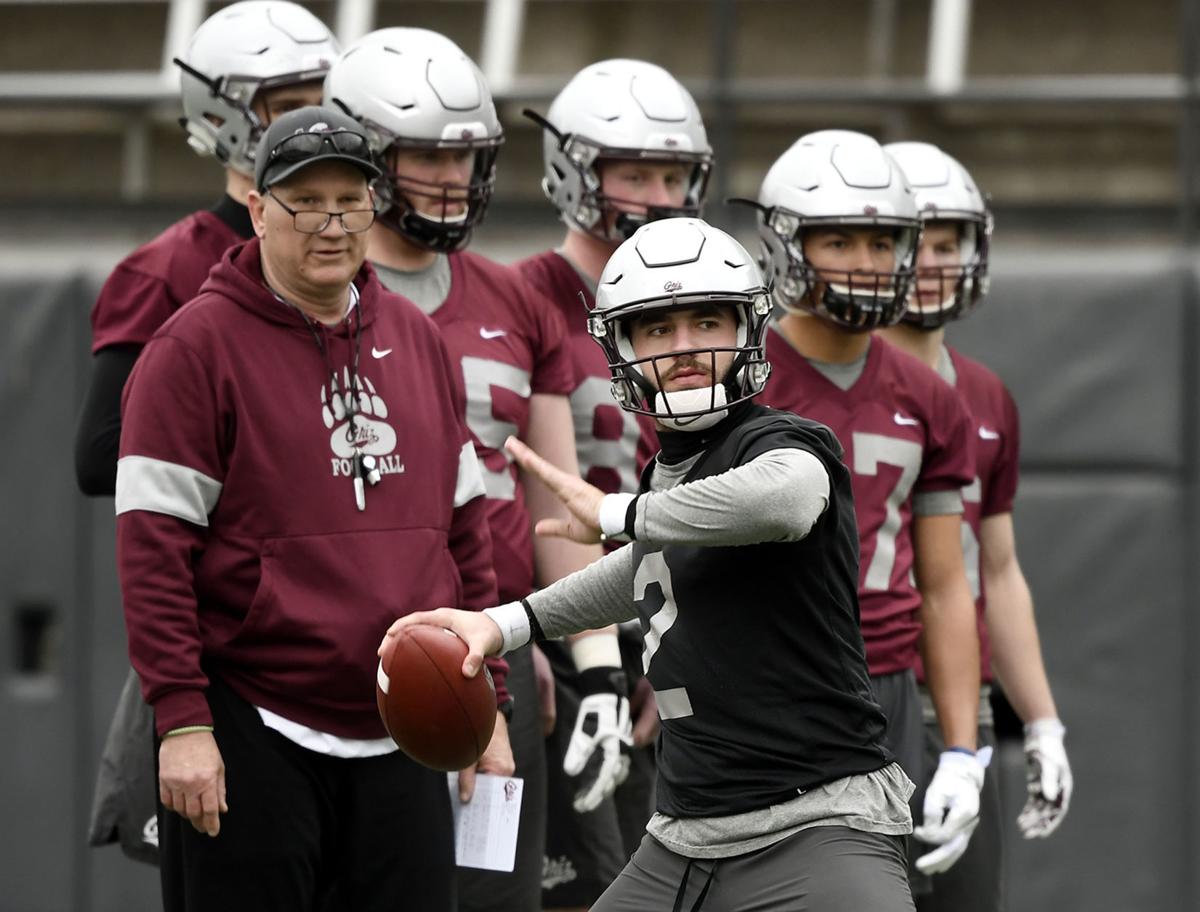 Humphrey passes during the first day of spring football at Washington-Grizzly Stadium on Monday.

MISSOULA — Montana head coach Bobby Hauck knows the elephant in the room is the quarterback battle to replace Dalton Sneed, so he broached the topic himself before being asked about it on the first day of spring camp Monday at Washington-Grizzly Stadium.

“We need to replace a really good player at that position,” Hauck said. “Hopefully, we’ll have some clarity coming out of spring ball on that. If not, we’ll go into fall camp.”

The quarterbacks competing for the spot are senior Cam Humphrey, sophomore Robbie Patterson and redshirt freshman Kris Brown. Humphrey is in his third season at UM and has started three games. Patterson is a junior college transfer coming off an injury but was a full participant Monday. Brown redshirted in 2019, his first season after graduating from Bozeman.

Hauck said the top quality he’ll be looking for in naming a starting QB is “guys that can win games.” So the question is how do they determine that in the spring when quarterbacks aren’t going live and taking hits and when there aren't any games being played.

“We don’t,” Hauck said. “That’s why we probably won’t have a decision.”

So how do the quarterbacks go about separating themselves from one another?

“They just play better,” Hauck said. “It’s the beauty of spring ball is you get to play a lot. The quarterbacks aren’t ever live, at least right now they aren’t going to be. We may have to get to that point if we’re going to make a decision sometime before the first game. But they just need to play well.”

The reps are still important in spring ball as the coaches chart every throw and review the film. They weigh the completion percentage with the group of players on offense and the defensive personnel the quarterback is facing each snap and then “decide who’s playing best.” Humphrey took about half of the 11-on-11 snaps Monday, and Patterson and Brown split the other half.

Hauck doesn’t feel it’s important that the starting quarterback has to be the vocal leader of the offense.

“It’s not, other than he’s got to say, ‘Hut,’ loud enough when we’re on the road,” Hauck quipped before providing a more serious answer. “I think actions speak louder than words at all points. So, 'Well done is better than well said, and your actions speak so loudly I can’t hear what you’re saying,’ is the mantra around here.”

The trio of quarterbacks agreed that Humphrey is the most talkative, Brown is the quietest and Patterson is somewhere in between. They shared laughs while discussing it as a group, showing a glimpse into their friendly yet sure-to-be-competitive quarterback room.

“Ever since I’ve been here,” Humphrey started, “there’s always been a good vibe in the QB room from Dalton Sneed and Tanner Wilson and me to now with Kris and Robbie. It’s just the mentality that everyone walks into. We’re all here to be friends, but at the end of the day, we all want to play, and we’re all football players and very competitive or we wouldn’t be here. So, it’s friendly competition. We’re trying to push each other from all angles. That’s how we’re all going to get better as a group, so that’s what it’s going to take.”

Breaking down the QBs

Humphrey has a leg up on the competition because he’s the only quarterback on the team who has playing experience at UM. He started three games in 2019, completing 47 of 67 passes for 561 yards with five touchdowns and two interceptions, while rushing 18 times for 40 yards.

“I like to think I’m pretty good throwing the ball,” said Humphrey, who went to Boise State before going to Saddleback Community College. “I can move when I need to and make the right reads. I feel all quarterbacks should be able to do that. But I feel like I do it pretty well.”

The main area of focus in the spring for the 6-foot-2, 194-pounder will be becoming a more consistent passer.

“I think consistency is something you can always strive to be better at,” Humphrey said. “No one’s perfect. I think perfection is the goal in this sport. There’s been some guys that have gotten close: Tom Brady, Aaron Rodgers. But just trying to get out here every day and try to get as close to perfect as we can and then just bringing along the younger guys and my fellow seniors and hopefully we can put together a team that’s pretty close to perfect.”

Patterson is coming off a missed season following a torn PCL and meniscus. He spent that past two years at Saddleback Community College but didn’t overlap with Humphrey.

Before his injury, Patterson showed his dual-threat ability, passing for 2,575 yards with 20 touchdowns, eight interceptions at Saddleback. The 5-11, 200-pounder ran 98 times for 354 yards and five scores.

“I think when people look at quarterbacks, they want to put a label on them that either they’re a pocket passer, dual-threat guy or whatever,” Patterson said. “I just want to be known as a quarterback. If I need to run, I can. The possibility is there, but I can also throw if it’s asked of me. That’s how I like to see it.”

Patterson has the most to learn of the quarterbacks in terms of Montana’s offense. He just arrived on campus this semester.

“Learning the playbook is the big thing for me because I feel if I have a better understanding of the playbook, I’ll play cleaner and have more opportunities,” he said. “I also want to push Cam and Kris to be great, too, so if I can compete with them, that’ll make the whole team better. So, that’s my goal is learning the playbook right now.”

Brown redshirted as a true freshman during the 2019 season after taking third-string reps during fall camp but impressing with his release of the football.

“I’m more of a passer,” said the 6-4, 204-pound Brown, “but I think in the present game, you’ve got to be able to move a lot. I would just describe myself as a guy that can kind of be agile and throw the ball.”

Brown is now focused on implementing what he learned while redshirting.

“After my redshirt season, I kind of got an idea about the playbook and the concepts to run them,” he said. “Now, I would just say it’s drilling those things down in my memory and being able to do them with my eyes closed is the emphasis for me this spring.”

Montana hired Bryce Erickson, the son of Dennis Erickson, as the tight ends coach. He replaced Jace Schillinger, who “recently accepted a new position in the private sector,” according to a UM news release. It’s the first coaching change since Hauck returned to Montana in Dec. 2017.

Sophomore Garrett Graves practiced at safety Monday, although that’s by no means the future position for the versatile Eureka grad who’s practiced at quarterback and played sparingly at running back and receiver. “We’re going to find that kid a home because he does some good things,” Hauck said.

Big Sky grad Levi Janacaro practiced with the linebackers Monday after spending the past two seasons at running back. Sentinel grad Elias Dewaters worked with the running backs Monday, moving back to the position he was recruited to after a brief stint at cornerback late last season while he redshirted.

True freshman defensive lineman Noah Kaschmitter from Grangeville, Idaho, was added to the roster and practiced Monday after grayshirting in the fall.

Schweyen was 52-69 in four seasons as head coach of the Montana Lady Griz.

Shannon Schweyen was one of many factors that led Montana girls basketball players to sign with or commit to UM.

Bill Speltz: With sadness and eternal optimism, we turn the page on Montana Lady Griz basketball

Shannon Schweyen may not be back next season, but she'll always be Lady Griz royalty to Missoulian sports editor Bill Speltz.

Curious what the Montana men's basketball roster is going to look like next season? We were too.

Bill Speltz: With sadness and eternal optimism, we turn the page on Montana Lady Griz basketball

Shannon Schweyen may not be back next season, but she'll always be Lady Griz royalty to Missoulian sports editor Bill Speltz.

What happens if there's no football? It would be especially hard on Montana since it relies on ticket sales more than anyone else in the Big Sky.

Montana quarterback Kris Brown hands the ball off to running back Nick Ostmo as quarterbacks Cam Humphrey (2) and Robbie Patterson (10) watch on Monday at Washington-Grizzly Stadium. The practice was the first of spring football for the Grizzlies.

Humphrey passes during the first day of spring football at Washington-Grizzly Stadium on Monday.