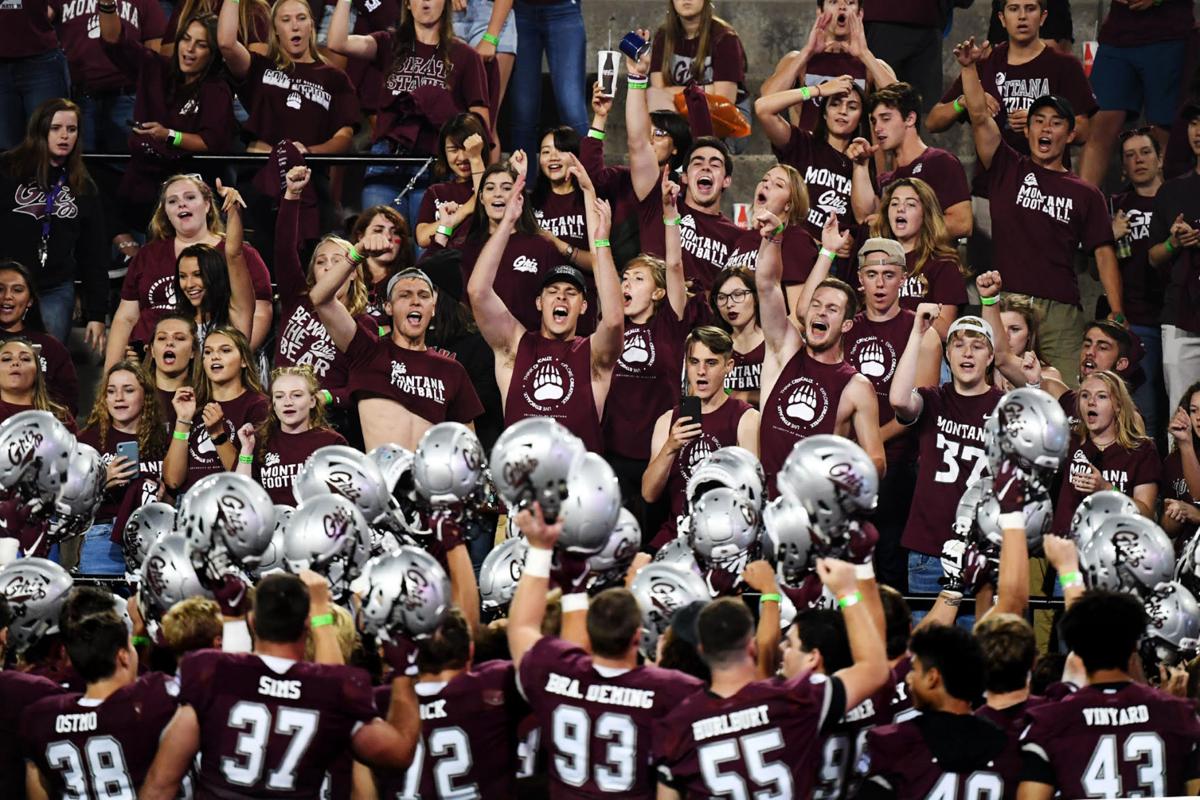 The Montana football team sings to the student section after a win last season. The Grizzlies are planning to play their full 11-game schedule as is, but things can change because of the coronavirus with about three months to go before the opener. 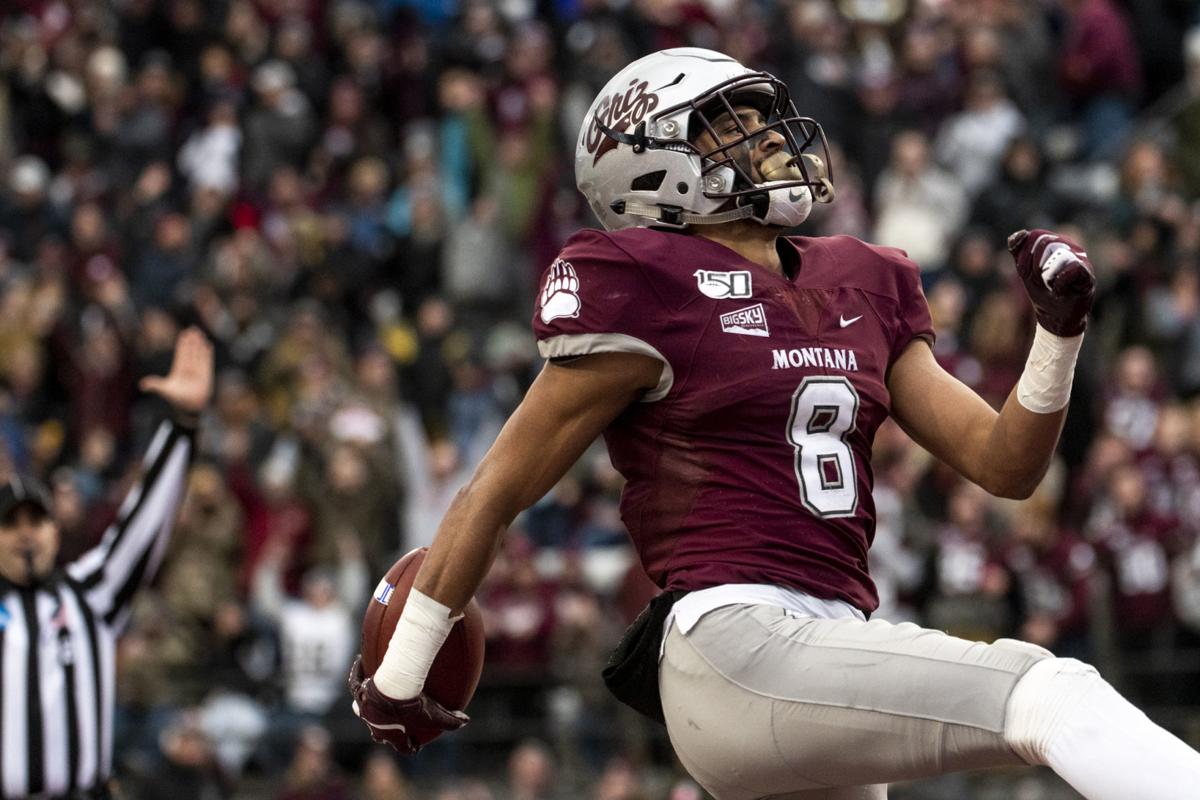 Montana wide receiver Samori Toure prances into the end zone after catching a pass and shaking Southeastern Louisiana's Dontrell Smith during their FCS playoff game at Washington-Grizzly Stadium in December. The All-American is sure to be a focal point of the offense again in his senior season.

That might end up changing because of the coronavirus pandemic, but Montana athletic director Kent Haslam said the school is planning to play games as scheduled so they don’t get caught off guard if they all happen when and where they’re supposed to be played.

Montana’s players returned to campus for voluntary workouts earlier this month, so it’s a good time to take a still-too-early look at the schedule three months before the opener. Since taking a way-too-early look Jan. 1, Montana has added seven more transfers and other schools have made moves, too.

The goals for Haslam in putting together the schedule are first getting six home games and then trying to make them all Division I opponents. The six home contests are accomplished, but UM will play one D-II opponent in Central Washington, a team that’ll be familiar to Griz fans for what could be an easy win, although it won’t count toward playoff qualification.

Some of the highlights include hosting Montana State, defending conference co-champ Sacramento State and Cal Poly, and going on the road to Eastern Washington, Idaho and Missouri State, a Missouri Valley Football Conference team with a coach who has ties to Montana.

The Griz, ranked seventh in a pair of preseason FCS polls, could potentially be heading into the 120th Brawl of the Wild, which they get at home, with an undefeated record or just one loss in a best-case scenario. They’re coming off an FCS quarterfinals appearance heading into coach Bobby Hauck’s third season back in Missoula.

“The schedule will be challenging, but overall should be fun and exciting for our fans,” Haslam said. “I am just excited to get all of our sports back competing in the fall.”

So, should the schedule be played as is, what are the most and least intriguing games?

Montana could put together a scary performance on Halloween after a 57-14 blowout win over Southern Utah in 2018. It could be even worse for the Thunderbirds this time around. They lost QB Chris Helbig to the transfer portal, graduated their All-American center and might end up being a one-win team in 2020.

UM will play Morehead State for the first time when it closes non-conference play. The Eagles went 5-7 and return six all-league players, but they play in the non-scholarship Pioneer League, so it could be a blowout. The Griz should have their QB and new starters set after three games, providing a better outlook for league play.

Northern Colorado first-year head coach Ed McCaffrey will have a big rebuilding project. He has to replace QB Jacob Knipp and workhorse running back Milo Hall, among others. It could be a long season for the Bears, and the motivation might not be there for them come November. It'll be just the second trip to Greeley in eight years for Montana.

With QB Case Cookus gone, it could be a rough transition for coach Chris Ball in Year 2. It’ll be the second game of UM’s only two-game road trip, and the team can’t be looking ahead to Montana State. Winning this one could keep the Griz atop the league or in contention for the crown heading into the final week. UM has lost two in a row at NAU and three of five overall.

UM will open the schedule against a D-II team after a long offseason caused by the coronavirus. There will be many unanswered questions, namely who gets the nod at QB or if there’s a rotation and how transfers and players returning from injuries look. It may not be the most sound game because of the lessened offseason work, but football will finally be back.

The Griz will face Montana native Bobby Petrino in their first road test. Petrino, a first-year coach in the MVFC, has to rebuild after stops in the SEC, ACC and NFL. He’s added Southern Miss QB Jaden Johnson, a 4-star prospect ranked as the No. 20 pro-style QB in the country coming out of high school. How quickly can Petrino turn things around?

UM opens league play against new Mustangs coach Beau Baldwin, who led EWU to the 2010 national title. He’s moving away from Cal Poly’s triple-option, but how much can he do by this fourth game? There's also the question if Cal Poly will even play; the California State University System, which includes Sacramento State, will have mostly online classes in the fall.

The Griz will aim for their third win in a row since the battle for the Little Brown Stein resumed. Coach Paul Petrino, a Montana native, will have a new QB following the graduation of his son, Mason Petrino. UM will also get to see ex-Grizzly cornerback Dareon Nash, who transferred this offseason, as well as maybe the Big Sky's best linebacker corps.

Some air was taken out of the matchup when QB Kevin Thomson entered the transfer portal Thursday. UM will still be looking to avenge a blowout loss last year and will have a bye week to prepare. The Hornets lose some linemen on both sides but boast running back Elijah Dotson, who ran for 234 yards against UM in 2018.

Montana will face All-American Eric Barriere, the top returning Big Sky QB, for the second and final time after he had an off game last year in Missoula. The winner of this early matchup should be one of the front-runners for the regular-season title. UM will try to end a five-game losing streak in Cheney, winning there last in 2008.

Playoff seeding and the chance for a Big Sky crown could be on the line. The Griz will try to end their first four-game losing streak in the series since 1977. They’ve lost four of five against MSU, which will be redshirting Troy Andersen, and will try to avoid their first three-game home skid to MSU since 1972-76.

The Montana Grizzlies get their first known football commit in the class of 2021, a 3-star athlete.

The Montana football team sings to the student section after a win last season. The Grizzlies are planning to play their full 11-game schedule as is, but things can change because of the coronavirus with about three months to go before the opener.

Montana wide receiver Samori Toure prances into the end zone after catching a pass and shaking Southeastern Louisiana's Dontrell Smith during their FCS playoff game at Washington-Grizzly Stadium in December. The All-American is sure to be a focal point of the offense again in his senior season.