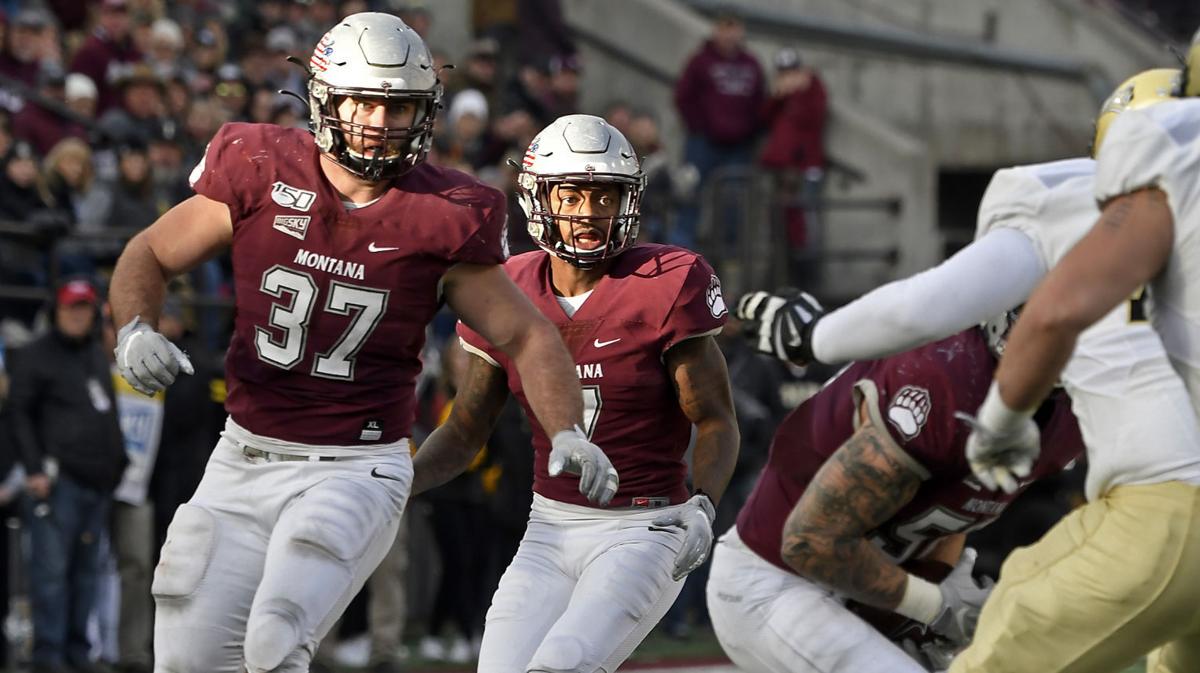 Former Montana football player Jesse Sims (37) pursues a ball carrier during a home game against Idaho in this 2019 photo. Sims died on Saturday. 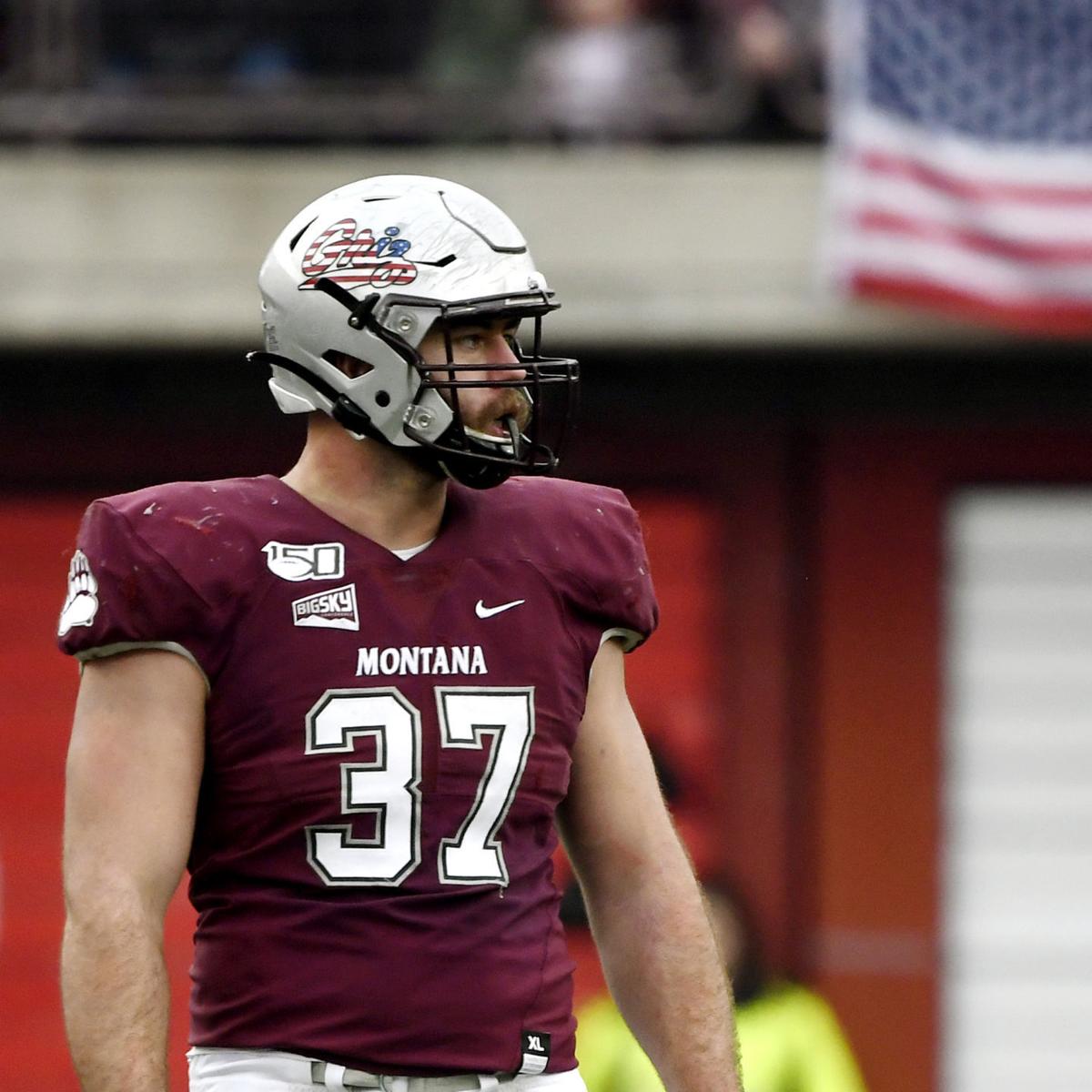 Former Montana nose tackle Jesse Sims looks to the sideline during the Grizzlies' 42-17 win over Idaho on Nov. 9, 2019, in Missoula.

Stitt tried to learn everything he could about Sims after the standout player from Montana decommitted from Oregon State after a coaching change. He learned that Sims loved country music, so he called him to come stop by The Depot steakhouse one night.

At the time, Stitt was recruiting another player, Colin Morris, who came to town with his best friend from high school, Stelen Covel, and that friend’s father. Sims was never one to say too much, but Stitt saw the excitement in his eyes that night when he met country music singer Toby Keith.

“It was pretty cool because we had Toby Keith here with his son on a recruiting visiting and we knew Jesse was a big country music fan,” Stitt recalled Tuesday, three days after Sims tragically died, sending shock waves throughout Missoula, the Bitterroot Valley and surrounding areas.

“We were eating at The Depot and sent word to Jesse that Toby was in town with us. He stopped by the restaurant and pulled out some T-shirts and hats, and Toby signed them for him. He didn’t say anything much while visiting and then took off.

“Toby goes, ‘Is that kid a senior on your team? And I’m like, ‘No, he’s a senior in high school.’ And he goes ‘Whoa.’ He was just so physically mature that he looked like he was a senior in college.”

Stitt doesn’t believe the meeting had a significant impact on Sims choosing the Griz over the Cats. Sims was from nearby Stevensville, his sister was playing for the Lady Griz at the time and he seemed to get along with the football coaching staff.

That interaction, though, became indicative of the type of person Stitt got to know in his three seasons coaching the Griz. Sims was a straightforward, hard-working, even-keeled person who led by his actions instead of his words.

“He was the perfect player and the perfect person because you knew exactly what you were going to get out of him on the field and you never had to worry about him off the field,” Stitt said. “He was always going to give extreme effort in everything he did.

“If you had 120 Jesse Sims on your team, you’d have the easiest job in the world. He was self-motivated, never got in trouble, went to class, was respectful and treated people awesome.”

That admiration people had for Sims was what made his death Saturday in an ATV accident strike a chord with so many. On top of that, he was only 24 years old and had so much more to accomplish in life.

For all his hard-nosed play on the field, Sims was a humble, genuine and kind person off the field. Former Grizzly and NFL veteran Steven Pfahler got to witness that firsthand.

Sims started training at Pfahler Sport Specific as a high school sophomore and was hired as an assistant strength coach toward the end of his college redshirt freshman season. He became a full-time employee after his playing career at UM and had celebrated his one-year anniversary working there in May.

“So many people know Jesse the football player and Jesse the big tough guy, but they don't understand how much of a sweetheart he was,” Pfahler said Tuesday. “Just such a kind individual and loving fiancé and loving son.

“I just want people to know so much that he was not just a big tough athlete. He's one of the kindest individuals I've ever met. The guy did everything right. I can't think of a mistake he ever made. And I've sat here and thought about that.”

Sims, a health and human performance major, had previously said he was looking toward a career as a strength and conditioning coach or personal trainer following his playing days. He thought he might even pursue becoming the strength coach for a college football team.

“Truly a sad day for us all. Jesse was one of the best guys you’d ever want to know, and was going to do great things in this world,” Griz football sports information director Eric Taber wrote on Twitter.

Sims had his whole life ahead of him and had become engaged to Jace Henderson, the current Missoula Big Sky girls basketball coach and a former Lady Griz basketball player and assistant coach, on July 17, 2020, according to Henderson’s Facebook page. They were to be married in August.

“Love you Jesse,” former Lady Griz player Gabi Harrington wrote on Twitter. “Thank you for being so good to my best friend. I’ll miss being a weirdo with ya. You didn’t deserve this.”

Many people knew Sims as the local kid who did good after starring at Corvallis and Stevensville high schools. While he was sometimes overlooked in the stats column at UM because of his role of eating up blockers, he was known for representing the program by wearing the No. 37 legacy jersey with a reverence for the past and a pride of carrying on the tradition.

“Jesse embodied exactly what it meant to be a Montana kid that got the chance to represent Montana every Saturday during football season,” former teammate Mick Delaney wrote on Twitter. “Absolutely heartbroken for the Sims family.”

Sims was so respected that he was elected as one of three team captains for his senior season in 2019.

“Damn man ... life’s just not fair. Rest easy to one of the greatest leaders I’ve ever been around,” former Griz quarterback Reese Phillips shared on Twitter.

“Your legacy will live on forever,” former Griz assistant coach Jason Semore wrote on Twitter. “Jesse lived a purpose driven life, the world is a better place because of his time here. Great Teammate, Great Leader, great Person. You are loved and missed greatly.”

Sims joined Griz linebacker Dante Olson as part of Stitt’s inaugural recruiting class in 2015. Olson would take longer to blossom than Sims, but he learned lessons from watching Sims and parlayed that into becoming the 2019 Buck Buchanan Award winner as the top defensive player in the FCS.

“He’s what you would think of a Montana football player,” Olson said during the 2019 season. “Just a blue-collar, hard-nosed, doesn’t say much, but he’s going to hit you in the mouth. I love watching how he works. He’s got one of the best work ethics I’ve ever been around. All the recognition he gets is definitely well deserved.”

Sims also helped show younger players the ropes as he learned himself.

Griz linebacker Jace Lewis noted in 2019 how he learned from Sims. The Lewistown native went on to become the 2020 Big Sky preseason defensive MVP the year after Sims graduated.

“He reminds me of (the) preacher on 'Friday Night Lights,'” Lewis said of a recurring character with the name Reverend Grady. “He’s quiet, but he’s a good, hard-working kid. He grinds in the weight room. He comes out here, practices at a high level every day. He doesn’t complain. He’s just a great guy to have above you and learn from.”

Former Griz defensive lineman Braydon Deming still carries the lessons he learned from Sims in their time playing in the same position group. The Billings native is now playing at Illinois State.

“Jesse I am forever grateful for the time we have had together,” Deming wrote on Instagram. “From the day I stepped on campus at the University of Montana, you took me under your wing and showed me the way. You showed me how to work hard, to really work hard in everything that I did. You led by your actions, not your words. That is something that I learned from you that I try and emulate.

“I will forever cherish the memories we had as teammates. I will miss the jokes and the laughs that we shared. I am not a big social media person but I felt like I needed to post something because you’ve had and will forever have a lasting impression on me. Rest easy Legacy, love you brother. #JS37.”

NBA Finals: What is the best result for the books?

Should there be concern around the Yankees?

Should there be concern around the Yankees?

The former Missoula Big Sky standout and Stanford Cardinal will make a return to Missoula next season.

DeAri Todd feels he has untapped potential, and the grad transfer from Michigan State is hoping to fulfill that potential on the football field at Montana this fall.

Isiah Childs is driven by his desire to succeed, both for himself and for his family, which led him to transferring from Akron to Montana for football.

The University of Montana athletic department and the Grizzly football program are mourning the loss of former Grizzly defensive lineman Jesse Sims of Stevensville, who passed away following an ATV accident Saturday morning.

The Montana men's basketball team added wing Scotty Washington to the roster after the California product announced his commitment via Twitter.

The Montana women’s basketball program has added a transfer from East Carolina.

Former Montana football player Jesse Sims (37) pursues a ball carrier during a home game against Idaho in this 2019 photo. Sims died on Saturday.

Former Montana nose tackle Jesse Sims looks to the sideline during the Grizzlies' 42-17 win over Idaho on Nov. 9, 2019, in Missoula.