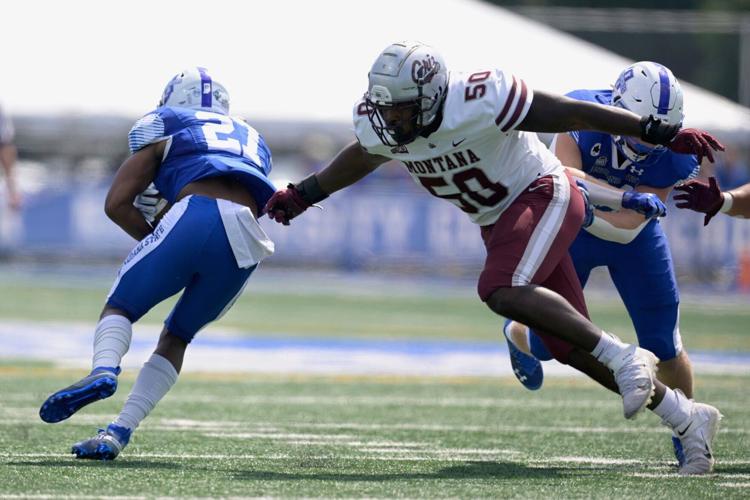 Montana defensive end DeAri Todd (50) chases Indiana State running back Justin Dinka (27) in the game between the Griz and Sycamores on Saturday at Memorial Stadium in Terre Haute, Indiana. The third-ranked Grizzlies scored a 42-7 win to improve to 3-0. 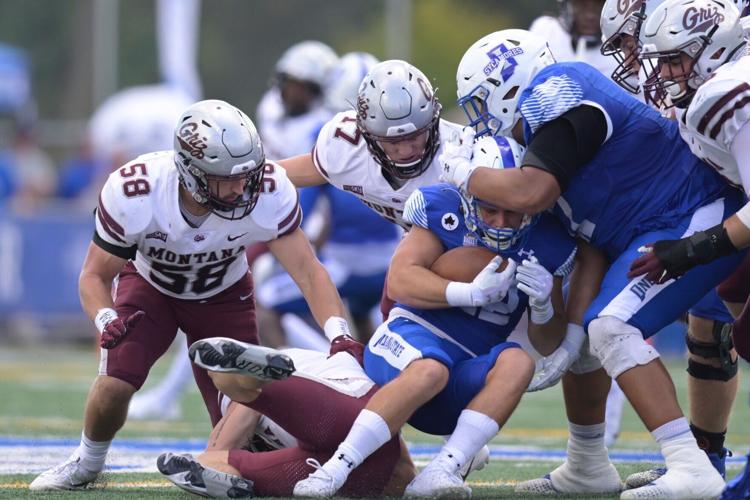 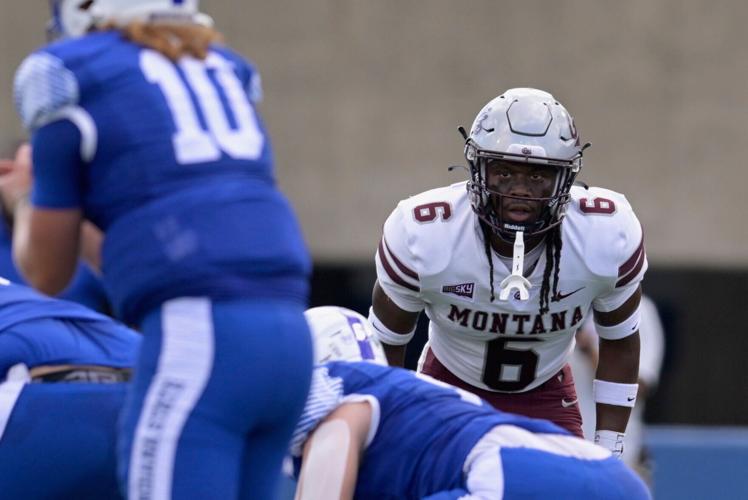 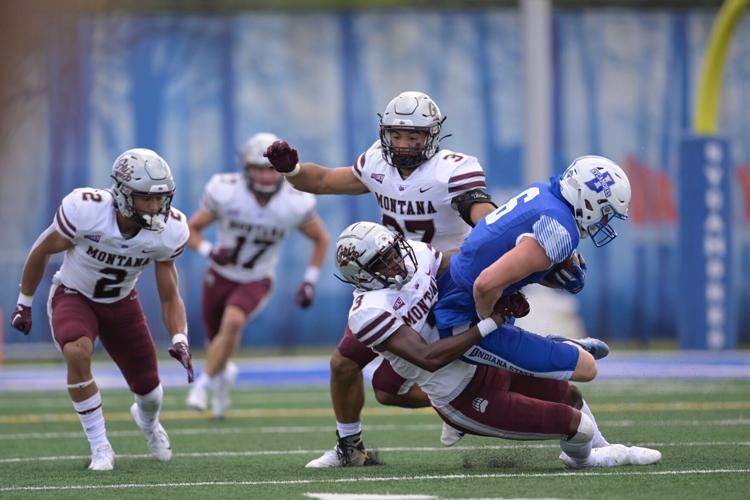 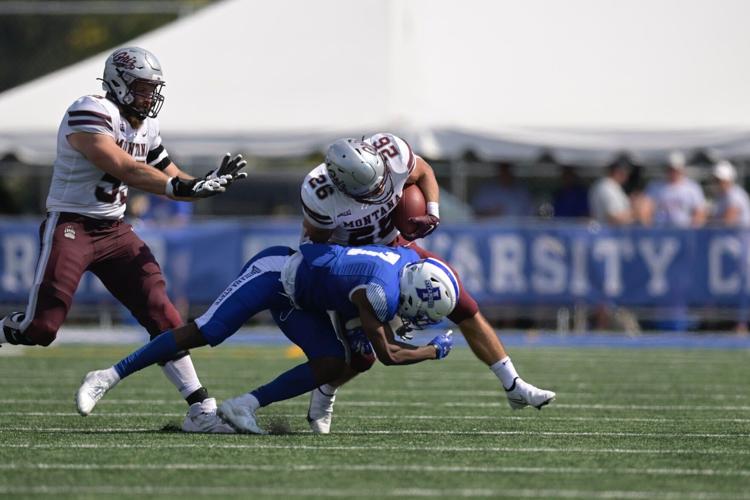 Montana running back Nick Ostmo carries the ball while Indiana State defensive back Johnathan Edwards attempts to make a tackle.

TERRE HAUTE, Ind — Lucas Johnson took to the air early and often against Indiana State on Saturday at Memorial Stadium.

Montana game planned for the possibility that Indiana State would try to take away the run, and the seventh-year quarterback showed he could deliver with his arm if his legs were eliminated from the equation. He had been the team’s leading rusher each of the first two weeks but sliced up the Sycamores through the air as the game progressed.

Johnson had season highs in pass attempts and passing yards as the Griz left their mark on the Midwest with 406 yards of total offense, including 336 passing after totaling 451 in the air through the first two games. They scored 35 unanswered points in the 49-14 victory to close nonconference play with a 3-0 record.

Montana demonstrated that it has a versatile star quarterback to pair with its ferocious defense.

Johnson looked comfortable and in command while completing 18 of 30 passes for 232 yards and three touchdowns. He had thrown for 208 yards and four scores in the opener on 24 attempts, and he had 198 yards and one score on 29 attempts last week.

His completion percentage of 60 was his lowest after games of 62.5% and 79.3%. That could partly stem from the fact that he was taking intermediate and deep shots against Indiana State, something he said they saw on film, instead of dumping the ball to his playmakers and letting them gain yards after the catch with their athleticism and guys blocking downfield.

The Griz receivers showed their ability to high point passes and their strong hands to hold onto balls in tight spaces and through contact. Mitch Roberts had four catches for 61 yards, Malik Flowers caught three passes for 60 yards, Cole Grossman totaled 47 yards on three catches. Aaron Fontes had eight grabs for 93 yards, with much of that coming with the backups playing.

The Grizzlies’ 336 passing yards came on 44 attempts compared to 70 rushing yards on 33 carries as Johnson decided whether to hand off the ball on the read-pass option or keep it himself. They had been balanced in the first two weeks, throwing for 253 and rushing for 194 against Northwestern State, and throwing for 198 while running for 163 against South Dakota.

Montana used a 28-0 run from late in the second quarter until early in the fourth quarter to turn a 14-7 lead into a 42-7 advantage that put the game out of reach. The Griz scored four touchdowns over a period of six drives.

Johnson’s first touchdown was an 18-yard strike to Grossman to put the Grizzlies up 21-7 with 3:11 left in the second quarter. That drive included a 13-yard sliding catch by Flowers on third down and a 23-yard pass to a high-elevating Roberts. At 11 plays and 89 yards, it was their first sustained drive after totaling 15 plays over their first three drives.

“On every route, there’s either horizontal or vertical stretch, and he was seeing coverage well and got the ball where it was supposed to go,” Hauck said. “Protected well. That was good.”

Johnson punched in a 1-yard TD run to push the lead to 35-7 on the second drive of the third quarter, although he had Grossman wide open if he wanted to throw it. He ran just five times for 4 yards after he rushed seven times for 76 yards and 13 times for 72 yards and two scores in the first two weeks.

The Griz put the game out of reach when Johnson connected with Ryan Simpson for an 11-yard touchdown, the first score of Simpson’s career. That gave the Griz a 42-7 lead five seconds into the fourth quarter as they showed their wide receivers could succeed when competing for the ball.

“All these guys are really reliable,” Johnson said of his pass catchers. “We put in so much work over the summer and fall camp that it’s just showing right now. Whoever lines up out there, I have full trust that they’re going to go get the ball.”

The Griz forced a three-and-out following each of those scores, helping UM put the game out of reach. They had given up a touchdown and missed field goal attempt following their first two touchdowns and were clinging to a 14-7 lead midway through the second quarter.

Indiana State hung with UM early by rushing for 96 yards in the first half. The Griz had given up just 19 and 90 yards rushing in their first two games. That half included a 54-yard touchdown run by Justin Dinka to tie the game 7-7. The Griz held ISU to 13 rushing yards on 25 carries over the final three quarters after allowing 88 yards on 15 carries in the opening quarter.

Montana pushed the lead to 14-7 when Bergen completed a 27-yard touchdown pass to Flowers on a flea flicker. Indiana State didn’t find the scoreboard until Lucas Hunter had a scoop-and-score as he recovered a fumble by backup QB Kris Brown, forced by Maddix Blackwell, to trim UM’s lead to 42-14 in the fourth quarter.

Griz running back Colter Janacaro punched in a 2-yard rush with 96 seconds left to record his first college touchdown. Montana outscored Indiana State 28-7 in the second half after holding a 21-7 halftime lead.

“We had a couple things to get straightened out at halftime, but I thought our guys came out and played well throughout,” Hauck said. “It was a convincing win on the road.”

The No. 3 Grizzlies (3-0) finished the nonconference portion of their schedule on the road for the first time against Indiana State(1-2) in Te…

Montana defensive end DeAri Todd (50) chases Indiana State running back Justin Dinka (27) in the game between the Griz and Sycamores on Saturday at Memorial Stadium in Terre Haute, Indiana. The third-ranked Grizzlies scored a 42-7 win to improve to 3-0.

Montana running back Nick Ostmo carries the ball while Indiana State defensive back Johnathan Edwards attempts to make a tackle.