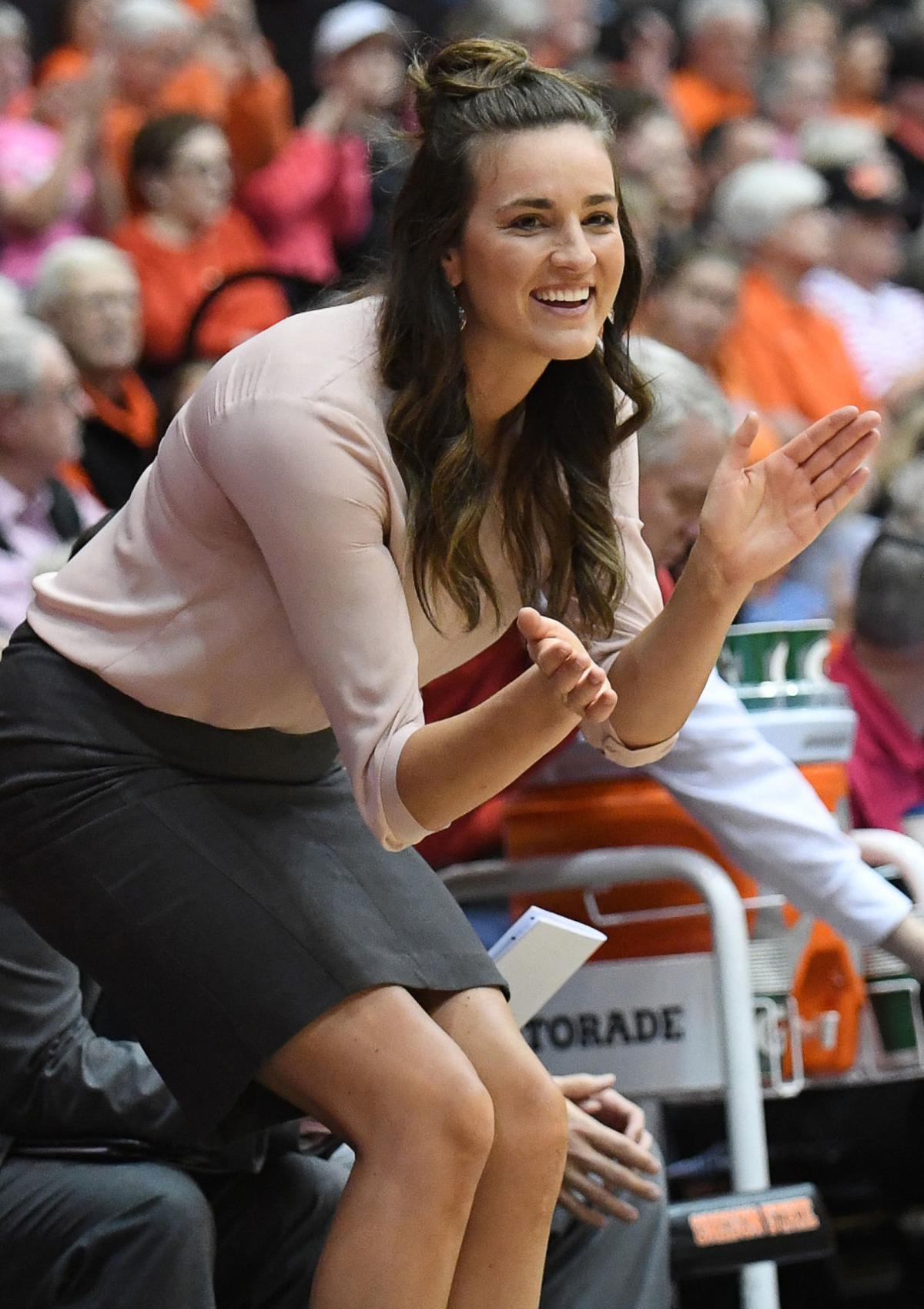 MISSOULA — While NCAA tournament berths have proven elusive for the Montana women's basketball team, there is one former Lady Griz who seems to have a standing reservation at the Big Dance.

Katie (Baker) Faulkner led Montana to two NCAA berths in a career that spanned from 2009 to 2013. She earned Big Sky Conference MVP honors and ranks as the fifth most prolific scorer in program history with 1,427 points.

After serving as a grad assistant coach at Wisconsin in 2015-16, Faulkner joined the Oregon State staff. She has helped guide the Beavers to three NCAA berths, including a trip to the Elite Eight in 2018.

Working largely with posts, Faulkner helped coach OSU to 23 wins this past winter before the season was cut short by the coronavirus pandemic. A personable and compassionate woman who grew up in Coeur d'Alene, Faulkner took the time to answer some questions for the Missoulian recently.

Q. What compelled you to get into coaching?

A. After playing a year overseas, I came back to the states ready to find my voice as a coach. I’ve always found myself in leadership roles throughout my younger years. I was a lead coach for an organization called NBC Camps and had experience leading large groups of young athletes, and I found great joy in being around the sport and watching others succeed. Not to mention, I love winning. But at that time, I still was so young and inexperienced around how the collegiate game worked. All I knew was Montana basketball. So I really wanted to set out and see where I could go in coaching, and I was willing to start anywhere.

Q. As an Oregon State assistant, what are some of your duties?

A. My role has truly evolved throughout my time, and I attribute that to the success of our staff and the mentorship of my head coach, Scott Rueck. Coach Rueck is an incredible teacher, so I’ve learned, developed, and progressed under his leadership. I spend a lot of my time recruiting. There’s really never a day I don’t go without recruiting. I love connecting with kids and speaking life into their process and coaching them through their college decision. So yes, I’ve been on many a plane throughout my days. Been to Europe and Australia finding kids that fit us. On the court, I am the post position coach, so I spend a lot of my time in the paint. However, I help run practice sessions throughout the season, and I am assigned opponent scouts where I run practice preparing us for game day. I’ve been the lead scout for Stanford, Arizona State, Team USA (that would include personnel such as Sue Bird and Diana Turaasi), and even a couple Big Sky teams.

Q. What was your favorite moment as a Lady Griz?

A. Hands down the pinnacle of our time at Montana was our senior year (2012-13), alongside three of the greatest teammates — Kenzie DeBoer, Alyssa Smith and Ali Hurley. We were on a mission that season. You take it for granted in the moment, but now looking back through the lens of a coach, I clearly see how truly special that season was. We had four leaders, all on one singular mission. Kenzie was the swag and confidence. Alyssa brought trust, constant communication, and a steady hand. Ali was the worker — do-it-all, be-everything player. Nothing was going to stop us. We won conference, hosted the (Big Sky) tournament, won the tournament on our home floor in front of our families and home crowd and made a run to almost beat Georgia in the tourney. I will never forget that.

Q. What did you learn from Robin Selvig that has helped you as a coach?

A. Rob was many things. A winner, a jokester and an X's and O’s genius. But more than anything he was consistent. And I respect him for that. In a game that’s constantly changing, in a society that’s ever evolving, and as generations become more into phones and social media, he stayed the same. After a win or a loss, the next day at practice he was the same man, same teacher, same coach. He brought the heat on the court and yeah, if you didn’t make your layups you were gonna hear about it. But then when you stepped off the court, he was your biggest fan. And the first to praise you to any media or person passing in the street. That’s a gift. And I have the utmost respect for him in that.

Q. What are your thoughts about the Lady Griz right now?

A. Montana is a great program. Montana has never stopped being a great program. I know recent events have not been easy for anyone involved, but I believe more than anything in the community, strength and foundation of Montana Lady Griz Basketball. The support of that program will continue to band together to bring great players and great people to Missoula. Coach (Mike) Petrino is a good friend, and I know he will work harder than anyone to continue the tradition.

Q. What's something Lady Griz fans don't know about Katie Faulker that they need to know?

A. One of my very first practices as a Lady Griz, Sarah Ena gave me a bloody nose when I was guarding her at the elbow. I kinda expected a little more sympathy from her, since she kinda was like, a role model in my life at the time who I looked up to. But instead she told me to "back up next time.” We went on to be roommates (smile).

A. The best memories came on road trips with Rob. All the coaches would drive rental cars, and one time, four of us were driving with Rob and he must’ve done something, I can’t remember, but he merged quickly and we all kinda looked side eyed at each other and grabbed the arm rests and he just leans over to me in the front seat and says 'Trust.'

Q. What are your goals for the future as a coach?

A. I have a goal to be a head coach of a program someday. I believe I have the leadership qualities to invest in young women and put together a winning basketball team. I think my experiences now are preparing me to take the reins of a program and, alongside great people, make it a great program to be apart of.

Q. How has COVID-19 affected your professional life and how do you expect it to alter the course of your summer?

A. A lot more zoom calls. We’ve had to shift as a staff from being in the office, but it’s honestly brought some very valuable conversations that probably wouldn’t have happened were we just doing the day-to-day job. Recruiting is way more streamlined. You get straight to the point in every phone call because there’s no beating around the bush, no official visits for now. So it comes down to fit or not. Summer is still unknown at this point. I can’t imagine not being able to do workouts with our team, and not being able to see our recruits out on the road is so hard.

Q. What have you learned about women's basketball working in the Big Ten and the vaunted Pac-12?

A. The biggest take away from coaching in the Big 10 and Pac-12 is first, have patience, and second, be ready to adapt. Basketball is one of the longest competitive seasons. It has it’s own ebbs and flows and wanting to rush to the end is futile. You can’t get to conference play without he lessons from your exhibition game. You can’t get to cut nets without grinding through January and February. You can’t get the team chemistry without first taking the tests of adversity. Having patience allows the season to take its course. Second, adapt. There are so many factors going into a game, and while you can prepare at an elite level, you always have to be able to adapt. Weather that’s moving practice back, or adjusting a defense, or changing up your coaching style, you have to have a feel for the moment and the humility and courage to adapt to what your team needs in that time. And always having a shooter in the corner helps too.

Q. The NCAA portal makes coaching even more challenging because it's so much easier to transfer now. What are your thoughts on the portal and how has your staff handled the challenge?

A. The portal is just another factor in an already ever changing game. Some programs rely on the portal and have kids leave and kids come in every year and that works for their style and system. I believe our mission and vision as a staff is to create a culture and environment where kids feel challenged and pushed, but also valued, known, and loved at the same time, so that no matter the circumstances, fewer names go into the Portal. At the end of the day, do your very best as a coach, and do what is best for the kid.

Q. What has been your favorite moment at Oregon State?

A. Man, there’s so many memories here in Corvallis. Coaching against the USA Team in Gill Coliseum whose roster included names like Sue Bird and Diana Taurasi ... Beating Oregon is always a highlight, of course. But I would have to say, my first year, when we played Stanford in front of a sold out crowd, 10,000 strong, and center Marie Gulich, who went on to get drafted by the Phoenix Mercury, finished an offensive rebound put back to win the game and seal us as sole Pac-12 champions. Confetti, nets, hats, trophies, joy. You can’t beat it.

The thought of Griz football season being canceled has caused some restless nights for Montana athletic director Kent Haslam.