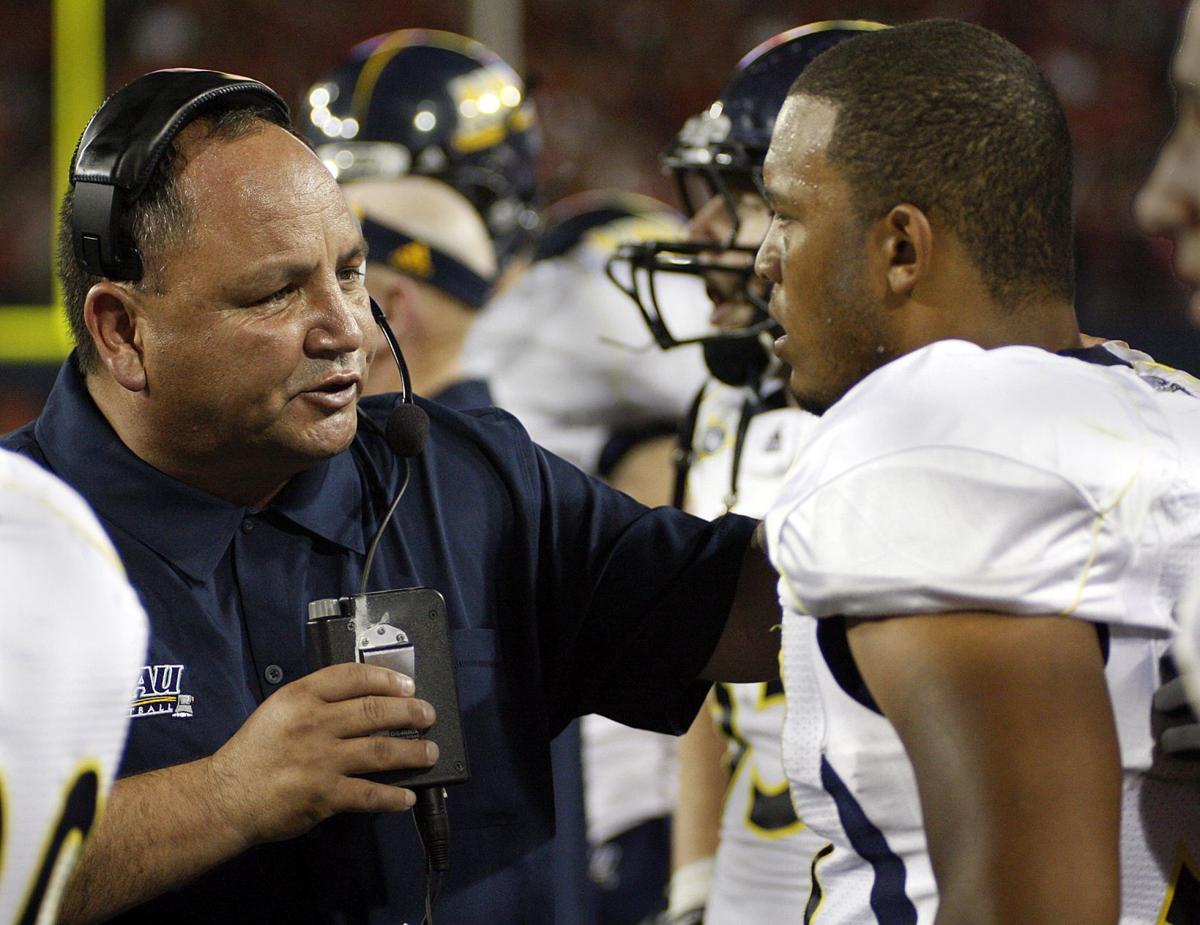 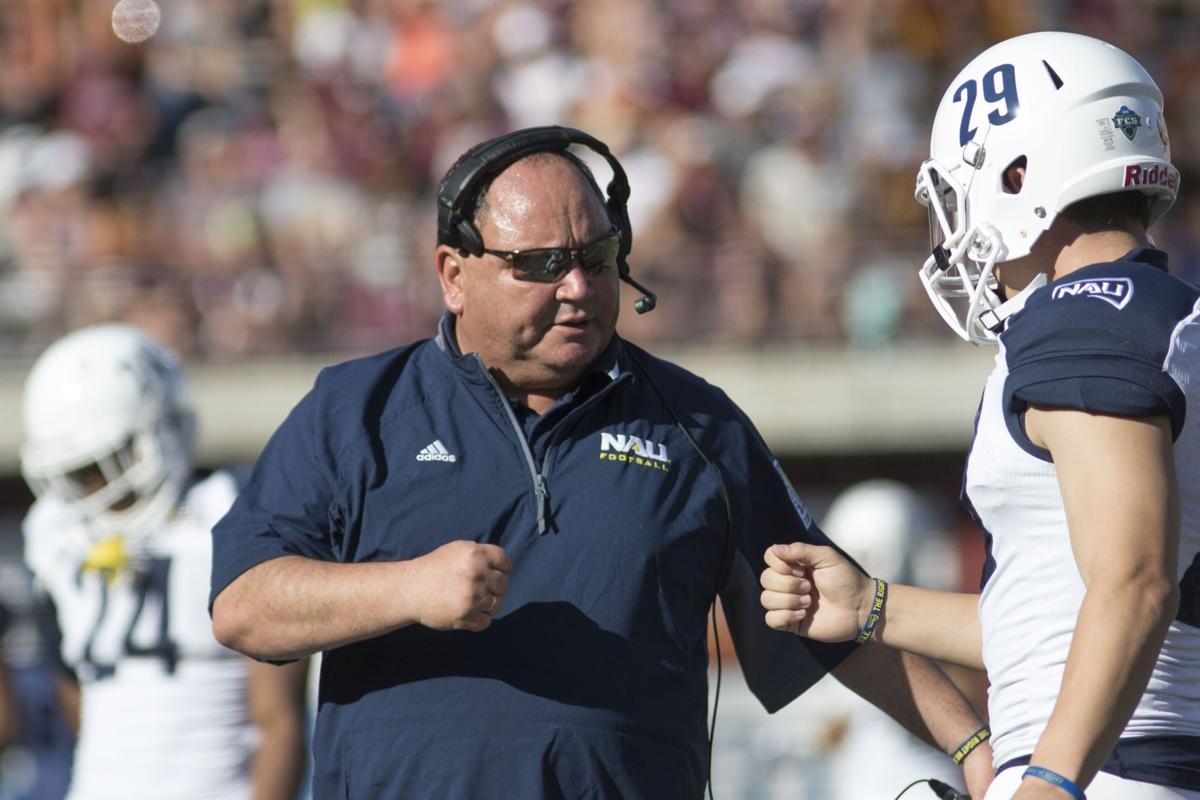 Souers, center, congratulates kicker Ryan Hawkins after a punt while facing Montana in 2015 in Missoula. "We didn’t get into coaching because it was easy or just to coach a damn game. Coaches in general are trying to give back to players what we all got from the game, which was an education, a maturing process that taught me so much more about myself than I would have ever known without it," Souers said. 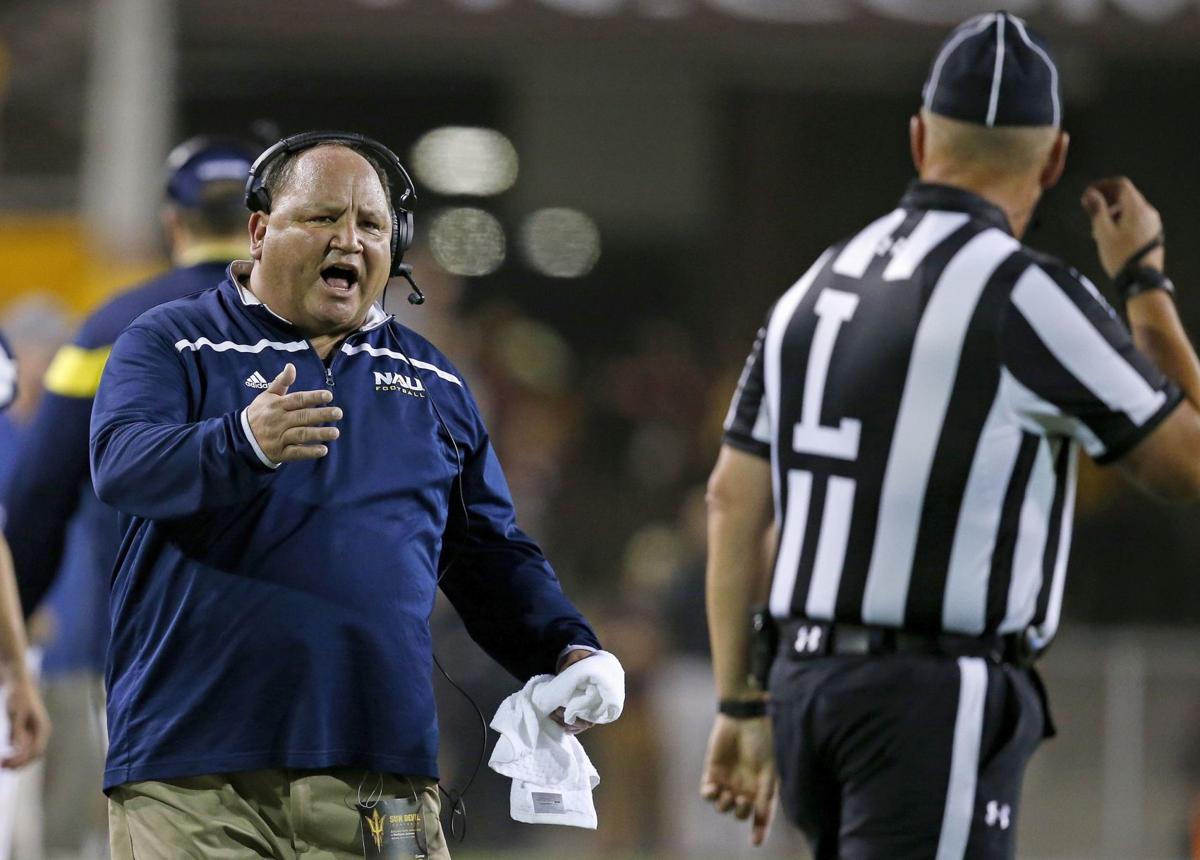 Souers, left, argues with line judge Steven Kovac during the first half of a game in 2016. 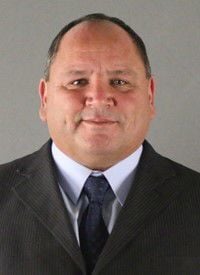 MISSOULA — Turns out Jerome Souers got back into coaching when he was needed the most.

He has the accolade of being Montana’s defensive coordinator during the 1995 national championship season. And he became the Big Sky Conference’s all-time leader in league wins during his 21 seasons at Northern Arizona.

So Southern Oregon could surely use his insight as its new defensive coordinator after going 4-7 last season. But that’s not why Souers’ return to coaching in January after taking a season off for the first time in nearly 40 years turned out to be ideal timing for him.

First there was the coronavirus altering life for people around the world. Then there was the killing of George Floyd by police in Minneapolis last week, leading to nationwide protests and riots that are ongoing.

Neither of those have to do with the X’s and O’s of football. But for the sage Souers, the first Native American head football coach in Division I, he says being a football coach has long been about more than just coaching football.

“I think a lot of times we’re looked at as our silo with the kids is just on the field coaching a game,” Souers said. “Yet, we’re mentors 24/7 until they graduate, and then we remain mentors for the rest of their lives as long as they want to engage in that relationship.

“It’s been a challenge. But that’s why we get into coaching. We didn’t get into coaching because it was easy or just to coach a damn game. Coaches in general are trying to give back to players what we all got from the game, which was an education, a maturing process that taught me so much more about myself than I would have ever known without it.”

That requires much more than simply talking to players and sharing his own story, Souers says. It’s about talking with them, something he says he and the SOU staff, led by head coach Charlie Hall, a former offensive coordinator at NAU under Souers, have been able to do with players virtually while in-person football activities have been shuttered.

“We’ve been on the phone, burning it at both ends, just talking with guys and making sure that they’re OK and that we’re supporting each other and staying together,” Souers said. “It’s a divisive time, and I think it can affect anybody in any group, like a football team, but we’re intent on staying together and being a template for the rest of the world to watch how racial harmony works.”

It’s not just the act of listening to his players’ words and then moving on, thinking that was enough, Souers says. It’s about hearing and absorbing and processing what they have to say to create a personal dialogue.

For Souers, whose hero as a kid was John F. Kennedy, he feels the country could be on the precipice of a meaningful moment.

“To bear witness to Martin Luther King Jr. and Malcolm X and Robert Kennedy, those were hard times,” Souers said. “And to see where we are today and the people reacting the way they are, all across the country, all across the world, is we are embracing, I think, the potential for real change. If we can get our citizens and leadership on the same page, I think we can accomplish that, and that’s the impasse as of today.”

Souers acknowledges he’s been through unfair treatment at points in his life as a member of the Lakota Nation and Cheyenne River Tribe. But the stories are too personal for him to share.

He also doesn’t want himself to be perceived as trying to be the center of attention while countless other people around the world are dealing with bigger, more pertinent problems. That includes some of his players, he says.

“In my own experience in coaching and dealing with kids, what I’ve learned is that we can’t love our guys enough,” Souers said. “We’ve got to support them. We’ve got to be there for them. We’ve got to have their back when they’re feeling like the world doesn’t anymore, and that happens a lot.”

Souers feels he inherited those qualities from his family of teachers. The ability to put those to use is thanks to his parents, who were raised on reservations in South Dakota but decided to move their family to Oregon.

The move granted Souers, who was born in Oregon, the opportunity to learn more about diversity and get better quality schooling. He thought he was going to get into teaching before realizing he could do that through coaching after a track career at the University of Oregon.

“I come from the breed of guys that are teachers first, and we value what’s happening in the process and the journey. It isn’t always about outcome,” Souers said. “What the outcome for us is, is that these young men learn to become men and are willing to go out in the world and be prepared for the challenges. There’s more challenges now than ever before. It’s a scary time for a lot of those guys.”

Helping players grow and mature is at the center of why Souers decided to get back into coaching, a career that began at his alma mater, North Eugene High School, before stops at Western Washington, Portland State, Montana and Northern Arizona.

He had found a purpose in helping people through his role in athletic fundraising and Native American Initiatives at NAU after his final season coaching there in 2018. But he was missing that direct impact he could make on young peoples’ lives.

“I wanted to re-engage with why I got into this business,” Souers said of going to the NAIA. “And before I can officially retire, I want to finish with the taste in my mouth of what it feels like to be around these young men.

“Some people said, ‘You’re not going up, you’re going down.’ No, I’m going where it’s right and where it’s going to fit me, and this is going to make me happy. It’s not about money. It’s about working with kids who want to be there. Entitlement’s out of the picture.

“I like where this is taking me. I’ve had more fun dealing with the kids around here and the coaches around here in spite of all the negativity of our country. This is going to be a great experience for us. I have no doubt. It’s been really refreshing professionally.”

Souers feels he’ll be able to again make that impact on his players’ lives as he gets back to his roots. He’s cut out the administrative duties of being a Division I head coach, so he’s able to spend more time focusing on one-on-one time with individual players.

That was a big factor in the move, as was the opportunity for him to get closer to his family. The latter hasn’t been a possibility yet because of shutdowns caused by the coronavirus, but he’s looking ahead to the days when those opportunities come.

His focus the past few months — and even more so the past couple weeks — has been trying to be there for his players as much as possible and in any way possible. That’s his motivation to continue with his job while the world tries to grapple with both the coronavirus and racial protests at the same time.

“This is a great learning opportunity, and it’s historical, so we have to pay attention to what’s most important now,” Souers said. “We’ll figure out the game. We’ll be back playing at some point in time. More importantly, our nation needs to heal. We need to unify with our approach.

“It can’t be next year, next whatever. It’s got to happen now. That’s what’s most important. I think that’s the focus of a lot of college coaches is, ‘Yeah, we love coaching the game, but we want to take care of our players, make sure that we’re approaching this, which is a really difficult time for a lot of kids we mentor, right here and now.’”

Where Are They Now: Derek Selvig making his own name as a coach at Montana Tech

“People are certainly supportive, and they want to be supportive, but ... we still don’t know a lot still about how this virus is going to work," said UM Athletic Director Kent Haslam.

Souers, center, congratulates kicker Ryan Hawkins after a punt while facing Montana in 2015 in Missoula. "We didn’t get into coaching because it was easy or just to coach a damn game. Coaches in general are trying to give back to players what we all got from the game, which was an education, a maturing process that taught me so much more about myself than I would have ever known without it," Souers said.

Souers, left, argues with line judge Steven Kovac during the first half of a game in 2016.