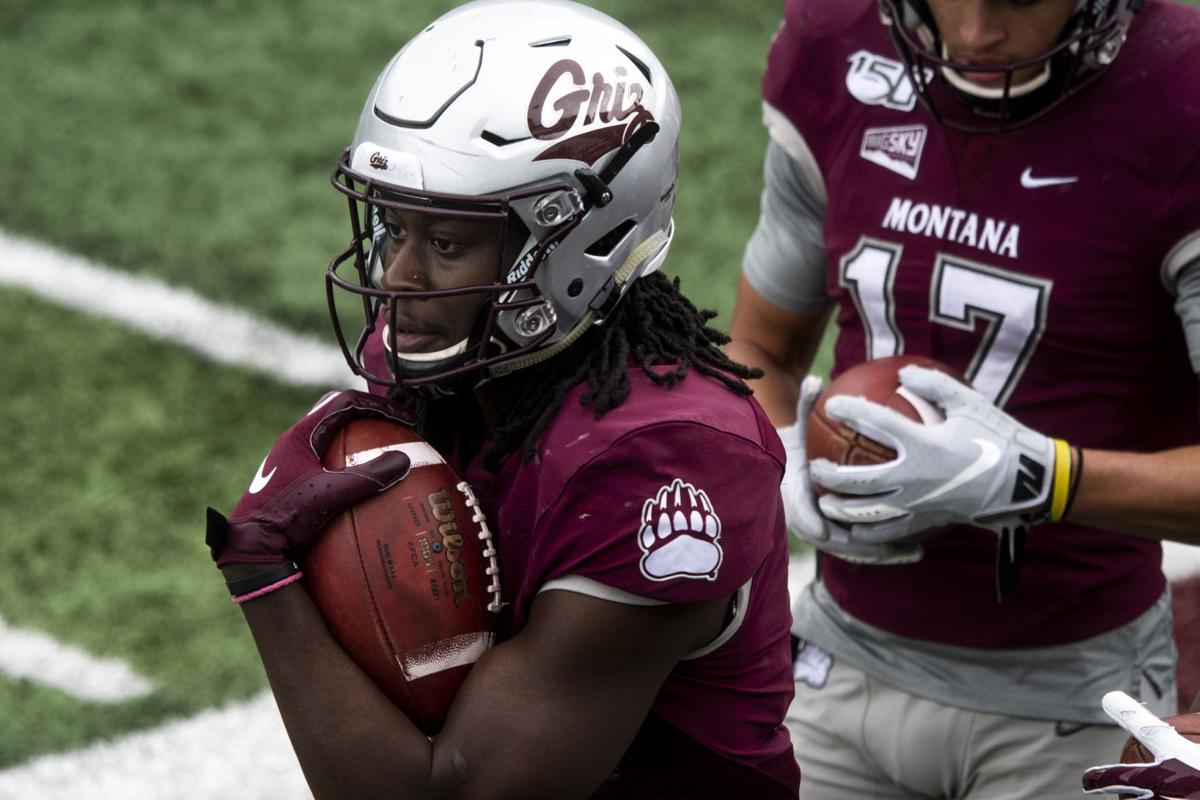 Montana senior wide receiver Samuel Akem practices at Washington-Grizzly Stadium on Monday. Akem is one of 11 receivers competing for playing time with the Griz slated to host Central Washington and Portland State in April. 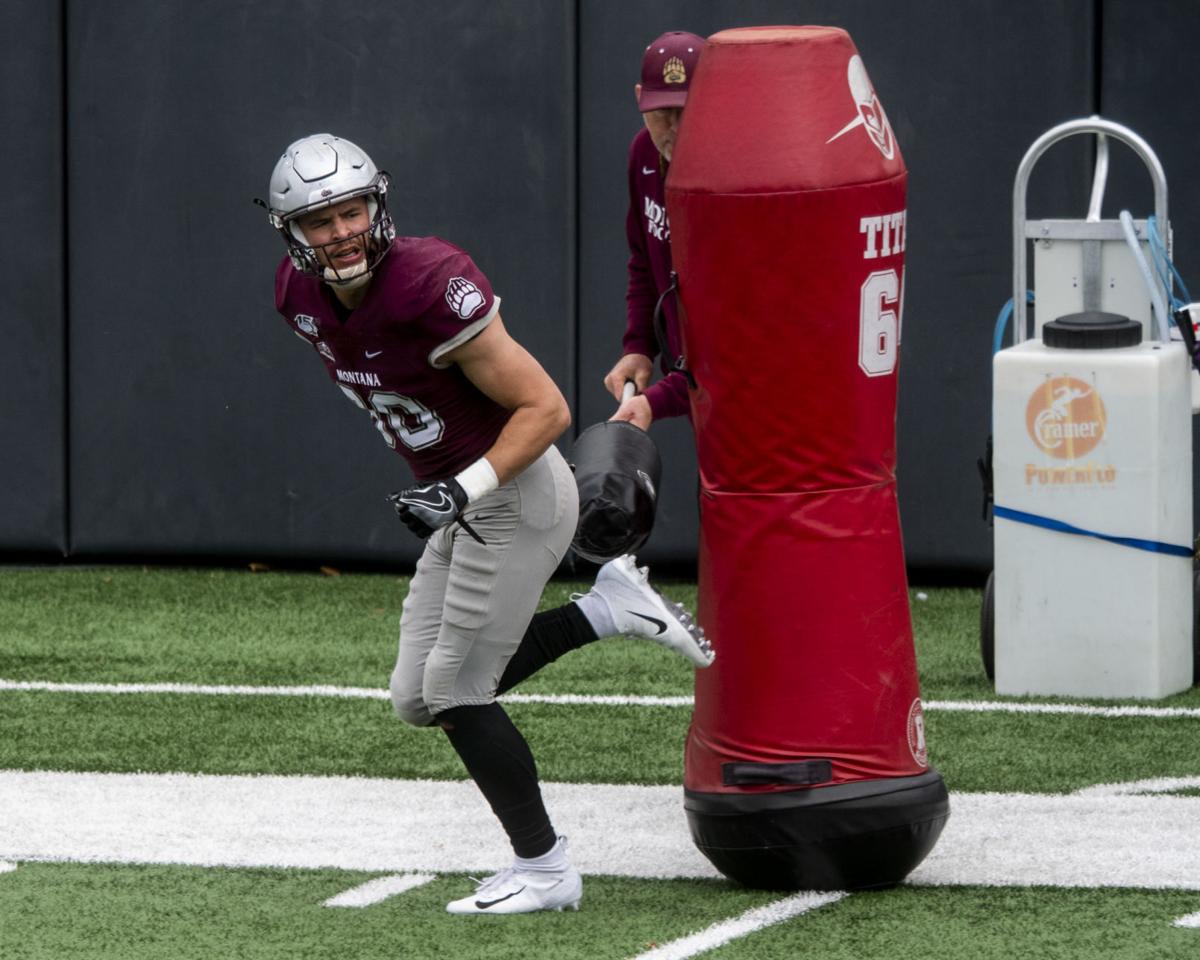 MISSOULA — This past year during the pandemic wasn’t all bad for Sammy Akem.

The Montana senior wide receiver used the time away from football — the Big Sky Conference canceled the fall season amid the pandemic — to focus in on school and graduate with his bachelor’s degree last semester.

“That’s the biggest positive of my life. I got that piece of paper,” Akem said after the Griz finished their sixth practice of spring camp Monday. “Other than that, I really don’t know how to find a positive in us getting our season canceled, but getting my degree is definitely one of the goals I had when I came here, so that’s a huge step in my life. So, that was probably the biggest positive I’ve had in some years.”

Akem majored in psychology and minored in human and family development. He’s continuing to graduate school but isn’t sure what path he wants to go.

One path he’s remained on is playing for the Griz. He stays in contact with friend Samori Toure, a first-team All-American receiver who transferred to Nebraska in November, another big loss from the Griz following the graduation of UM’s all-time receptions leader Jerry Louie-McGee.

“I’m here, so I don’t really know what else to say about that,” Akem said when asked if he had considered transferring. “Yeah, I’m here.”

Montana should be glad to have him. Akem is the lone senior with ample playing experience among the 11 receivers at practice. In fact, he’s started in 16 games at UM, while the other 10 receivers have combined for just six starts.

Akem enters his senior year in the top 20 in program history for receiving yards (1,934), receptions (136) and TD catches (20). He amassed 848 receiving yards and five touchdown catches, both the second most on the team, despite playing in just 10 games in 2019 before an injury. He still earned second-team All-Big Sky honors for the second time and had been a Sophomore All-American in 2018 when he caught 13 TD passes, the sixth most in the FCS.

While Akem seemingly has a leg up on the competition, Montana head coach Bobby Hauck noted that he had been getting challenged by some of the younger guys through the first two practices. Akem then responded during three practices last week.

“I thought he had a good week,” Hauck said. “I think he probably feels the pressure, and he came out and competed really well last week.”

The 6-foot-4 Akem knows he can’t rest on his laurels. He said he’s “feeling really good” around 210 pounds now after ending the 2019 season around 200 but putting on weight that had him feeling like “I felt out of shape” during fall practice. He focused on refining his footwork over the past year and working on his arms and abs as he tries to prove that he’s again deserving of playing time.

“I feel like going out there and earning it every day, it shows your teammates that you’re about it and also just prove to yourself and your coaches that you truly want it,” Akem said. “I feel that if you come in there feeling like you’re deserving of anything, that’s when you get it taken away. Nothing is guaranteed in this game ever. I found that out in 2019 when I got hurt. So, I’m coming out here every day just trying to work and trying to be better.”

Armed with that experience, Akem sees himself as a leader. For Hauck, the best leaders are the overachievers, and Akem knows he has room to grow as a player.

“I’m still working and grinding, too, so I don’t want to take it too far and do too much, but I definitely see myself as a leader and somebody that the younger guys can lean on and ask questions if they ever need anything,” Akem said. “I’m always there motivating my guys. We’re competitive, but when anybody makes a play, I love it just as much as they do. I love to see everybody eat, and that’s what it’s about.”

When Akem went down with that injury in 2019, Mitch Roberts filled in and made a good impression. The junior from Missoula Sentinel finished with 37 catches for 420 yards and one score while starting four games.

Sulser used the postponed football season to keep focusing on his rehab, which he called a blessing in disguise. He’s now ready for the heated competition among the receivers.

“I think it’s an extremely competitive group,” Sulser said. “I think there’s a lot of guys in our room that totally have great potential to not only play but be great players. That’s awesome. As a player, that’s what you want, especially for your team. It’s been really fun to compete. I know our room is very talented and we can go to a lot of different guys and trust them, and I think people will find out that we have some good playmakers within that room.”

Beyond those three, none of the other receivers have started a game. But they’re tasked with stepping up as Montana tries to establish depth, which it needed last year because of injuries.

“We’re all trying to make explosive plays, we’re all trying to score. That’s how it’s always been since I’ve been here,” Akem said. “The receivers have always been a competitive group because we see ourselves as the best group on the team. So, we always are working, we’re always trying compete and see who can have the better day, so I love it.”

Akem, Toure and Louie-McGee made a talented group last year. but now others have to step up. Hauck’s evaluation of the receivers revolves around “blocking, grasp of route concepts, precision,” he said, “and then obviously, certain guys have certain skills, and if you’re fast and smooth and can get in and out of breaks, that gives you a leg up.”

Malik Flowers, a standout kickoff returner, has one career reception. Redshirt freshman Keelan White stood out as a true freshman in 2019 fall camp with good hands and footwork along the boundaries but has just one career catch. Bozeman native Ryan Simpson was shown making big plays on highlight videos from 2020 fall practice but has yet to play in a game.

Senior Danny Burton has one career reception. The four other receivers have yet to play in a game at UM; junior Max Gardiner walked on this year after playing baseball at Linfield College.

“Competition makes everybody better, and they’re all scrapping for playing time, which is productive for everybody in terms of their growth,” Hauck said. “They’ve done a good job. I don’t think they probably had their best day of the spring last Friday, but before that, it’s been pretty good.”

The Grizzlies are hoping to have a full house when the fall season begins in 2021.

Montana senior wide receiver Samuel Akem practices at Washington-Grizzly Stadium on Monday. Akem is one of 11 receivers competing for playing time with the Griz slated to host Central Washington and Portland State in April.