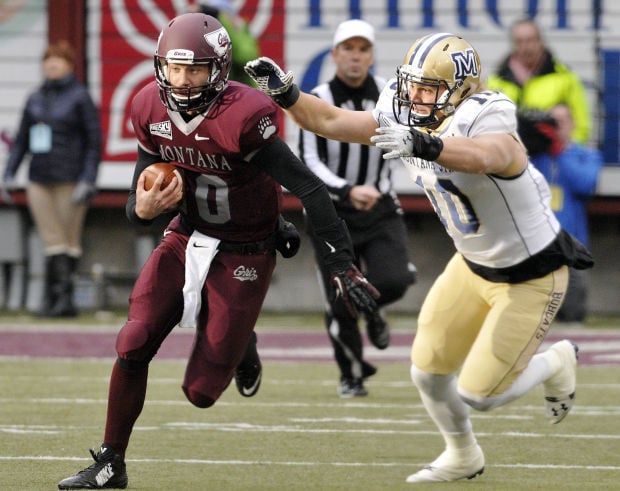 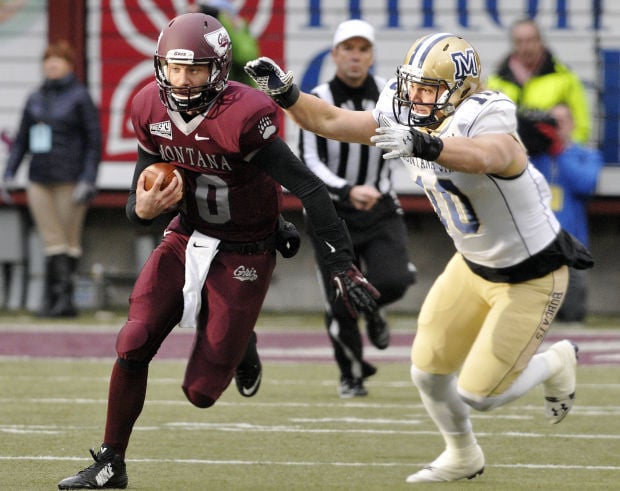 Montana quarterback Jordan Johnson scrambles away from Montana State's Odin Coe during the 2014 Brawl of the Wild at Washington-Grizzly Stadium. Johnson rushed for 80 yards and passed for 313 yards, including three touchdowns.

As a first-year player in any league, you can't make the team if you can't practice.

Former Montana standout Jordan Johnson became one of 12 Ottawa Redblacks roster casualties Thursday when the quarterback was released following the CFL team's three-day mini camp this week. Johnson missed the third and final day of camp because of injury.

Johnson experienced soreness in his throwing arm, so much so he could not participate in drills Wednesday. Ottawa trimmed its roster the following day to reach the 75-player maximum allowed for training camp at the end of May.

"We thought he was healed up and it wasn't something that was giving him any problems (recently)," Gittings said. "It flared up and he wasn't able to throw or practice on the third day."

Gittings would not specify the details of Johnson's injury, but confirmed it is shoulder related.

Johnson, one of two Ottawa QBs released along with Alex Carder, only missed time in a Grizzly uniform because of an injury to his right throwing shoulder once -- back in the 2011 season.

In a game at Sacramento State that September, Johnson hurt himself while making a tackle after throwing one of three interceptions. He was limited in practices the following week and sat out Montana's homecoming game against Northern Colorado that Saturday.

Despite the loss to Sac State -- the Hornets' first ever win over UM -- the Grizzlies reached the FCS national semifinals that season, the pinnacle of Johnson's time as signal caller in maroon and silver.

He missed the entire 2012 season while on trial for sexual intercourse without consent, a saga now documented in Jon Krakauer's recently released book, "Missoula: Rape and the Justice System in a College Town."

Johnson was acquitted in March 2013 and returned to the team that fall.

He went 28-11 as a starter, ranking third in team history in touchdown passes (78) and yards (8,615), and was showing signs of that success on Day 2 of Redblacks camp Tuesday, Gittings said.

"He threw the ball well with some good velocity, but not being able to participate the third day, there were some quarterbacks there that made some pretty big strides," the agent said.

Besides his angry right arm, the Redblacks' crowded quarterback situation also played against Johnson. The 6-foot, 195-pound Eugene, Oregon, native was one of six QBs under contract this spring.

The team didn't need to get down to four QBs this week and could have kept more if some of the prospects played their way onto the training camp roster, Ottawa head coach Rick Campbell explained earlier this week.

"We have six guys here," Campbell said in an interview with the Ottawa Citizen. "Usually it's tough to go to (training) camp with that many, but we are never going to turn away good football players even if it means we have an extra guy or two at a position, regardless of what that position is."

Even if Johnson had made it through the first round of cuts this week and advanced to training camp later in the summer, Ottawa would again trim its active roster before the season opener in June.

Rosters have a 44-active-player limit in season with as many as three QBs allowed. On top of that, CFL rules require each team to have no more than 20 "international players," guaranteeing all rosters be built with a majority of Canadians.

Among the Redblacks' remaining quarterbacks are Henry Burris, the projected starter, last year's backups Thomas DeMarco and Danny O'Brien, and newcomer Brock Jensen, a three-time FCS national champion passer out of North Dakota State who spent part of 2014 with the Miami Dolphins.

Also cut by Ottawa on Thursday was running back Shawn Johnson, a former Montana State product.

What's next for Jordan Johnson is unknown, especially should his shoulder problems persist. The QB drew interest from a handful of CFL teams before signing with Ottawa in February, Gittings said, but how much remains he does not know.

"The big thing for Jordan is he has to get healthy," Gittings said. "He has to figure out what's going on. Is it a long-term thing, or is it something that just flared up?"

Jon Krakauer, the best-selling author of "Missoula: Rape and the Justice System in a College Town," is headed to the titular town Wednesday to…

With his former teammates battling injuries and other pro hopefuls for roster spots, one former Montana Grizzly football player is already on …

Tuesday's release of best-selling author Jon Krakauer's latest project, "Missoula: Rape and the Justice System in a College Town," had many locals anxious if not uneasy. Not among them was University of Montana athletic director Kent Haslam, who called the latest account of several highly publicized sexual assault allegations against UM football players in 2012 and 2013 an "opportunity" not to be shied away from.

In the first signing of a likely handful off the 2014 Montana Grizzly football roster, former UM quarterback Jordan Johnson was picked up by t…

Montana sifting through plentiful resources for next starting QB

How many Grizzlies does it take to pass a football?

Montana quarterback Jordan Johnson scrambles away from Montana State's Odin Coe during the 2014 Brawl of the Wild at Washington-Grizzly Stadium. Johnson rushed for 80 yards and passed for 313 yards, including three touchdowns.