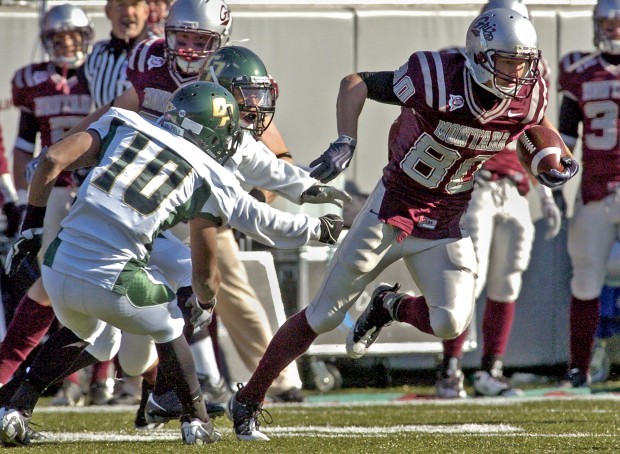 Montana’s Marc Mariani avoids Cal Poly’s Scottie Cordier, left, and Asa Jackson on a 68-yard touchdown pass from Andrew Selle during the Grizzlies’ 35-23 victory last October at Washington-Grizzly Stadium. Mariani’s touchdown, in the fourth quarter, was his second of the game, during which he had 200 yards receiving. Photo by TOM BAUER/Missoulian 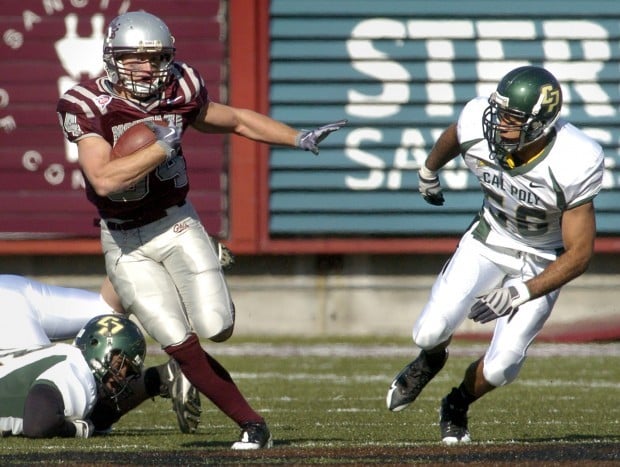 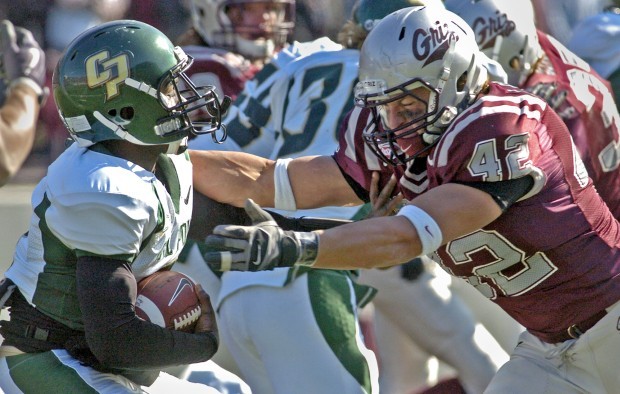 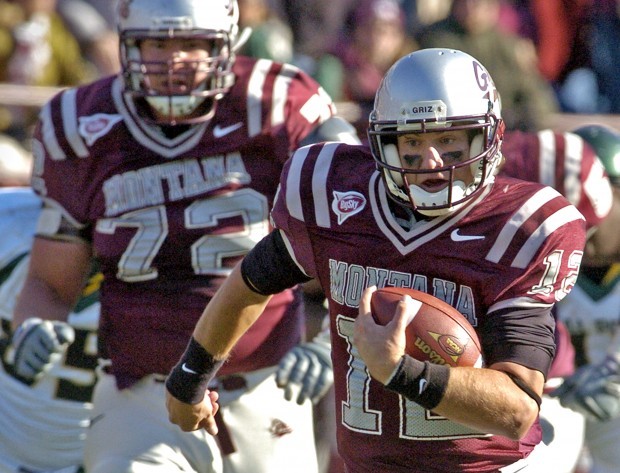 Montana quarterback Andrew Selle scrambles for yards in the Grizzlies' win over Cal Poly last season at Washington-Grizzly Stadium. The Griz make a return visit to San Luis Obispo this Saturday. Photo by TOM BAUER/Missoulian
By FRITZ NEIGHBOR of the Missoulian

Marc Mariani's gift for making big plays is both timely for the No. 4 Montana Grizzlies, who needed some to take down No. 15 Cal Poly 35-23 Saturday, and easy to explain.

"I would have to say I just don't really like getting hit," said the senior receiver, who turned short passes into touchdowns covering 84 and 68 yards, helping the Griz rally from a 10-0 deficit and into a commanding lead. "So I just try to run away from people.

"I don't know a better way to explain it. It's not a bad feeling, though."

All the Griz had a good feeling by the end of their 17th straight homecoming victory, in which they used a clock drive before intermission as a springboard to a dominant second half. Chase Reynolds wound up with 109 yards rushing and three scores, two through the air. Mariani had 200 receiving yards.

Yet there wasn't such a bright mood in the first quarter, where the third-largest crowd in Washington-Grizzly Stadium withstood 25-degree temperatures and wind, and saw the Griz open with three straight three-and-outs.

The Griz seemed to find life when Justin Roper subbed for Andrew Selle and hit Mariani, who picked up a block and then outraced everybody - notably Bijon Samoodi - to the end zone. The 84-yard score cut Cal Poly's lead to 10-7 at 8:15 of the second quarter, but momentum wasn't at hand for UM.

It came closer when Selle engineered a 38-second, 54-yard drive just before halftime, with Reynolds' 36-yard TD on a screen pass cutting Cal Poly's lead to 17-14.

Yet it wasn't until 9:03 remained in the game that the Griz had some semblance of command, and it was off a freakish play: Selle had a pass flutter and hang dangerously in the air, and Mariani still took it 68 yards to the house.

That made it 28-17, Montana, and Mariani felt some vindication. It was his muffed punt - it nosed down in front of him and bounced off his feet - that led to Cal Poly's second touchdown, a short run by fullback Jordan Yocum that made it 17-7 with 1:08 left in the first half.

"I was extremely frustrated," said Mariani. "And I dropped the ball on third down early in the game. Those are turnovers.

"I felt personally that I owed my team. The way our defense played in the first half - they got put in so many ridiculous situations, they just played unbelievable today - I just felt that after those two plays, I had to make up for it."

Mariani had company in the doghouse. Roper, seeing his first action since his concussion three weeks ago against Portland State, struggled after going big with Mariani. He bobbled three snaps and threw two interceptions.

The Griz ended with five turnovers, including a fumbled kickoff by erstwhile blocker Mike Sylvestre, and a fumble by tight end Steven Pfahler.

Cal Poly had its problems, too. Yocum had 84 rushing yards by halftime and ended up with 119, but quarterback Tony Smith bruised a thigh early on. Mustangs' coach Tim Walsh said that took one or more options away from his attack; they managed just 112 yards after halftime.

"When you run the triple option and you have one of the threats you want to be able to use not being able to run, that's probably not a good deal," he said.

Meanwhile Montana's ground game was finding traction. Reynolds had 100 yards after halftime, and took a second screen pass for a score, this time from 8 yards out with 3:24 left in the game. That capped the scoring and answered a 59-yard strike by Cal Poly backup QB Harlan Prather to Mike Anderson.

"Great calls by coach, and Selle getting the ball to me, and the linemen getting out there," said Reynolds. "On the first one, if Chris (Dyk, the right tackle) wouldn't have got out there and got the guy, it ain't going nowhere. And the second one, it was wide open. They were great calls."

And Mariani was Mariani, turning bullets and ducks alike into six.

"It was an ugly, ugly ball," Selle, who threw for three touchdowns in just over 16 minutes on the field, said of the 68-yarder. "It's a wounded duck out there. I was just trying to put the ball up for Marc and let him make a play. I let it hang out there; it didn't come out right."

It ended up great. Mariani stopped and corner Asa Jackson's momentum carried him past. The ball fluttered down, and Mariani picked it up.

"I'll give him credit," said Walsh. "He made some plays. You can say what you want but I don't think that those are the way you draw them up. To me the ball looked more like me punting the ball, or throwing it, and they got a couple touchdowns."

They still count, and better late than never.

"Rob (Phenicie, UM's offensive coordinator) had them dialed in pretty good," said Griz coach Bobby Hauck. "Had we had a little more success, not dropped passes and the such in the first quarter, you probably would have seen that a little earlier."

Key plays: Cal Poly's James Chen forces and recovers a fumble by UM's Steven Pfahler at midfield; Montana's Austin Mullins knocks down a third-down pass by Smith at the UM 15 to force the field goal.

Key plays: Mariani misjudges a punt that bounces off him and is recovered by Cal Poly; Yocum gains 13 yards on a screen to put the ball at UM's 4.

Key plays: Mariani hauls in an 8-yard pass on third-and-3 from midfield.

Key plays: Mullins chases down Smith on a third-down scramble, forcing Cal Poly to punt from UM's 41; Selle hits Rob Overton for 16 yards on third-and-11 ahead of Mariani's catch.

There were Marc Mariani's highlight-reel catches and Chase Reynolds' continued assault on the end zone, but the play of the game in Montana's …

Homecoming tradition dictates a return to support the school that supported you, and in that regard, the University of Montana Alumni Band sto…

Montana’s Marc Mariani avoids Cal Poly’s Scottie Cordier, left, and Asa Jackson on a 68-yard touchdown pass from Andrew Selle during the Grizzlies’ 35-23 victory last October at Washington-Grizzly Stadium. Mariani’s touchdown, in the fourth quarter, was his second of the game, during which he had 200 yards receiving. Photo by TOM BAUER/Missoulian