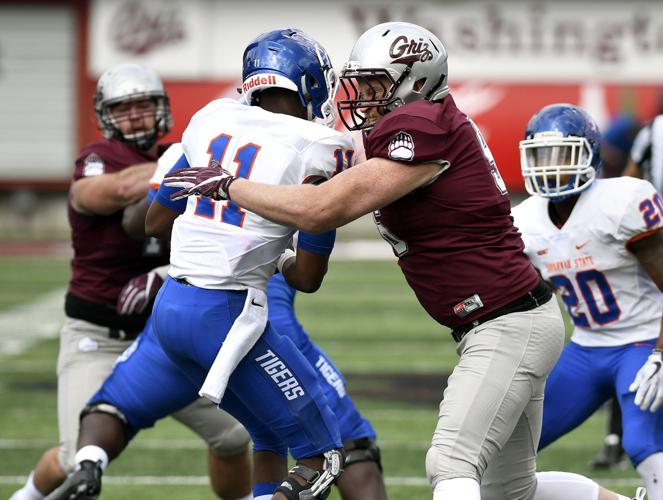 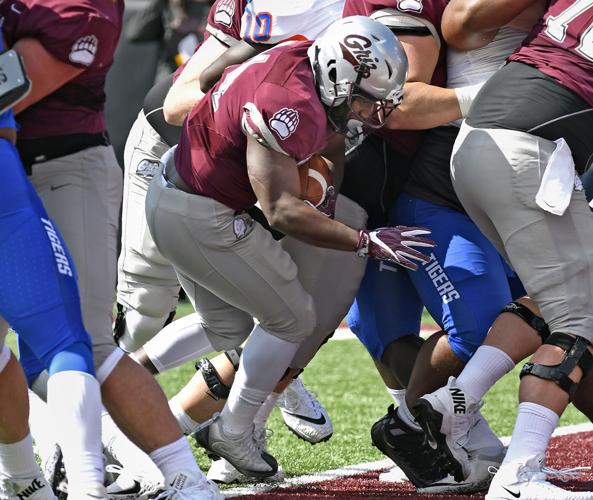 Montana's Alijah Lee runs into the end zone for one of his two touchdowns on Saturday. 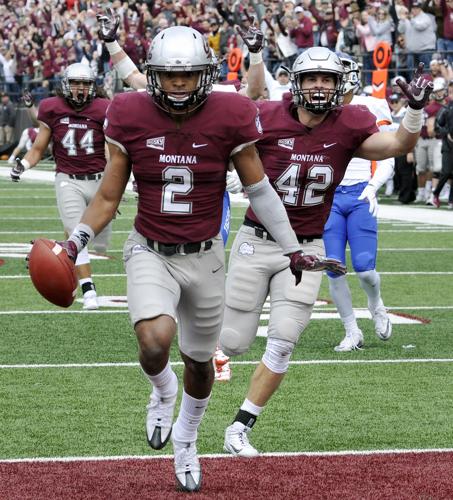 Montana cornerback Ryan McKinley, followed by linebacker Josh Buss at right, runs into the end zone for a touchdown on a 53-yard interception return in the second quarter. 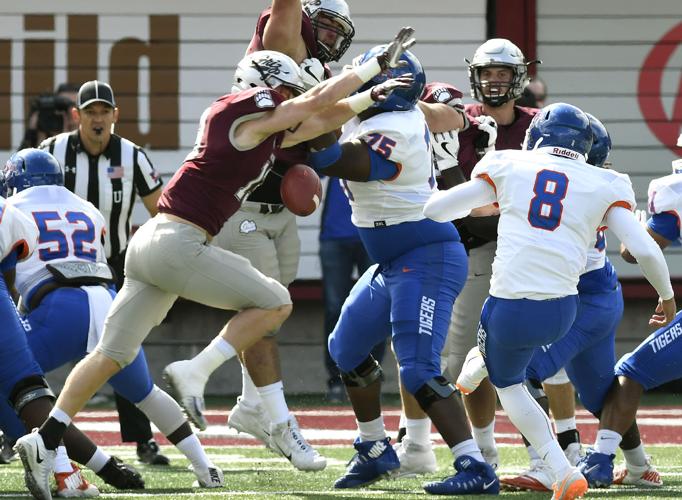 MISSOULA — It was a routine play on second-and-10.

Quarterback Reese Phillips scanned the field, looking for an open receiver. When he didn’t find one, he stepped up into the pocket to run the ball himself. It was something he’d done numerous times before.

As bodies came off the pile one by one, Montana’s endeared No. 11 didn’t surface. Phillips lay stiff as a board, face down near the 40-yard line.

And with that, a stadium that’s known for its intimidating atmosphere became eerily quiet in the second quarter. In that moment, fans knew immediately that something went horribly, horribly wrong.

“It breaks my heart and I know it does for everybody else in our football program,” Montana coach Bob Stitt said. “That's very tough mentally when you see one of your brothers go down and have to line right back up and go.”

Montana steamrolled Savannah State 56-3 by the game’s end, but the biggest takeaway for the Grizzlies is that they’re likely without their senior star for the foreseeable future.

Visual of Phillips’ injury had fans and the Grizzly team (and journalists too) holding down their breakfasts. Phillips’ foot wasn’t facing the right way — it was backward.

As Phillips was loaded into the cart, the entire Montana team came off the bench to show their support. Phillips gave a thumbs up to the crowd as he rode out of Washington-Grizzly Stadium, but the damage was already done, and so could be his season.

"We don't know anything right now,” Stitt said immediately after the game. “We'll wait for the trainers to hear from the team docs and then we'll get a group text going to the guys to let them know what's going on and get over and see him but I can't comment on it because — I don't think it's good — but I don't know."

Phillips' mom — Elaine Reese — tweeted Saturday evening that her son sustained ruptured ligaments and a broken bone and was in surgery as of 6:45 p.m.

Ruptured ligaments and broken bone. In surgery now. Thanks for your concern

Redshirt freshman quarterback Gresch Jensen came in as relief and completed 11-of-15 passes for 178 yards with three touchdowns in his longest appearance yet for Montana.

“Gresch did a nice job of running what we do,” Stitt said. “But he also had some nice checks in there. He was aggressive on the 1-yard line and that was not the play call and he did a nice job of that. He did a couple times where he got us into something nice and put the ball where it needed to go.”

With Jensen at the helm, Montana found the end zone on all drives but two — the first drive immediately following Phillips’ injury and an interception midway through the third quarter.

On the other side of the ball, Montana’s defense rocked Savannah State’s offense.

The Grizzlies combined for eight sacks and 15 tackles for loss against Savannah State’s quarterbacks in T.J. Bell and D’Vonn Gibbons.

Banks led Montana with 10 total tackles and Buss paced the Griz with two sacks for a loss of 27 yards.

"The energy, everyone feeds off of it,” Buss said of the total defensive production. “One person makes a play, it's not about them it's about the whole defense. We feed off each other. ... We're not doing anything supernatural or anything like that. Just a good scheme, everyone's playing hard and it's good to see a lot of sacks."

Buss also had an interception on the day, as did senior cornerback Ryan McKinley, who ran his back for a pick 6.

Savannah State’s lone score came off a 43-yard field goal from Giovanni Lugo to end the first half.

Next week, Montana kicks off its conference slate against Eastern Washington.

Amie Just covers Griz football for the Missoulian, among other things. Follow her on Twitter @Amie_Just or email her at Amie.Just@406mtsports.com.

Key moment: Montana, by way of running back Alijah Lee, scored on its first possession of the game.

Montana's Alijah Lee runs into the end zone for one of his two touchdowns on Saturday.

Montana cornerback Ryan McKinley, followed by linebacker Josh Buss at right, runs into the end zone for a touchdown on a 53-yard interception return in the second quarter.