FILE - This Sunday, Sept. 23, 2007, file photo shows Pittsburgh Steelers' Najeh Davenport in Pittsburgh. The NFL on Wednesday, June 2, 2021, pledged to halt the use of “race-norming” — which assumed Black players started out with lower cognitive functioning — in the $1 billion settlement of brain injury claims and review past scores for any potential race bias. 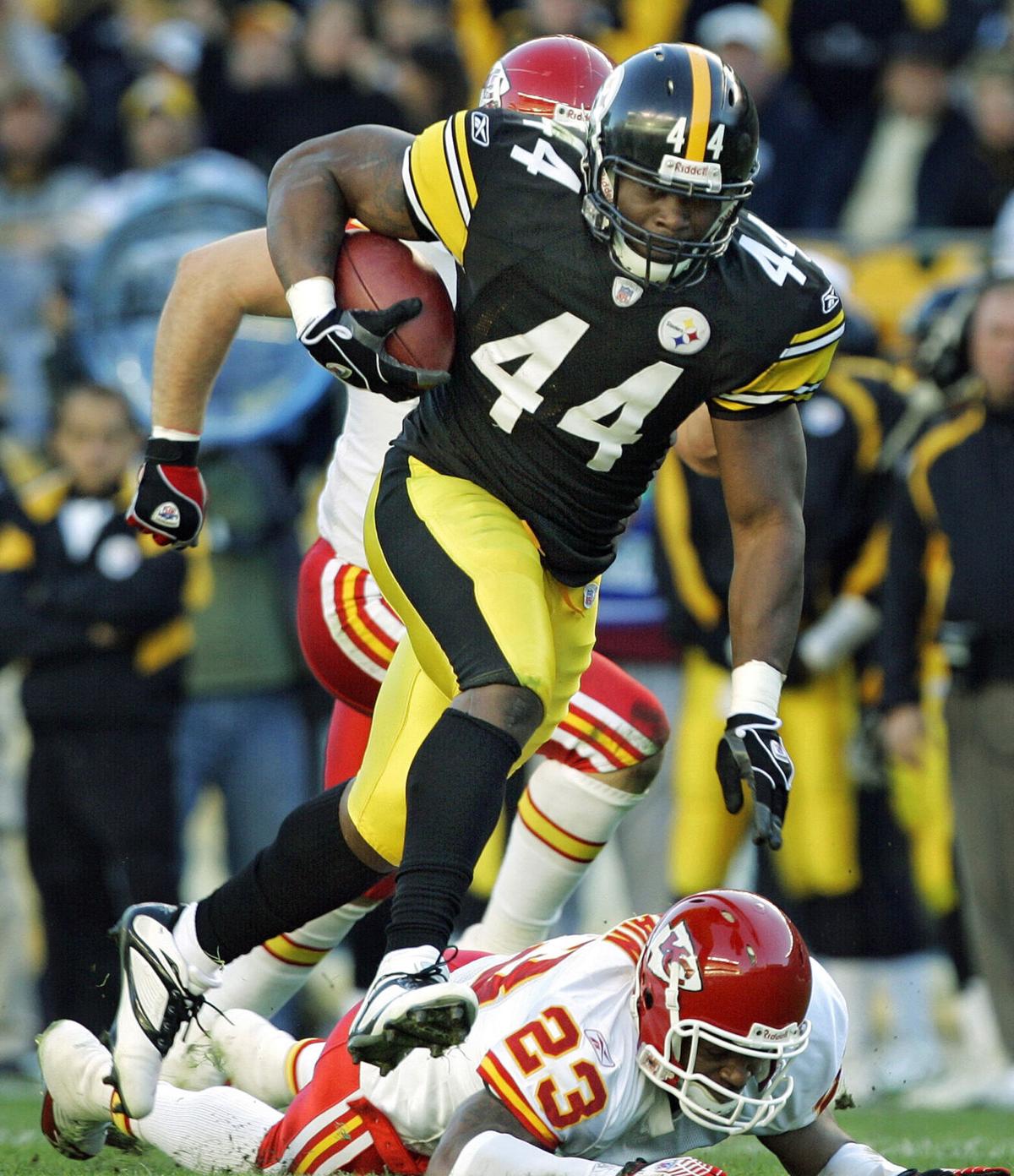 The NFL has promised to put an end to the controversial practice of “race-norming,” which assumed Black players started out with a lower level of cognitive function and thereby makes it harder for those retirees to prove they qualify for payouts in the administration of the 2017 $1 billion-plus concussion settlement.

“We are committed to eliminating race-based norms in the program and more broadly in the neuropsychological community,” the NFL said in a statement, while maintaining that no such discrimination took place in the administration of the settlement.

The revelation came to light last year when former players Najeh Davenport and Kevin Henry sued the league, alleging that race-norming led to them being denied a portion of the settlement. A judge dismissed the case earlier this year, and the NFL and Christopher Seeger, the lead attorney for the players in the concussion settlement, said the use of race-norms was not mandatory and up to the individual doctors to use or ignore while performing the evaluations.

Harry Edwards, a sociologist and longtime staff consultant for the San Francisco 49ers, has spent a half-century studying the intersection of sports and society. He spoke Sunday to the Los Angeles Times about race-norming, what it suggests and what the NFL should do to repair the damage it has caused.

When did you first become aware of race-norming as it relates to the NFL concussion settlement?

Edwards: I’ve known about this since last August. When it first became an issue, I was contacted by some people who have been looking at this thing as a eugenics issue for quite some time. But the details of it didn’t start coming out until the NFL faced that lawsuit. Then as we got more and more into it, it became clear that this was simply unacceptable.

It’s morally unconscionable, most certainly politically unsustainable and legally indefensible. You can’t have 74% of the players in the league Black but when it comes to actually being able to claim access to funds resulting from brain damage, dementia, CTE, other kind of cognitive-deficit-inducing conditions that are directly related to football, all of a sudden there’s a different standard for them. There’s a presumption that they come in at a cognitively lower ranking. A lower baseline.

What was your initial reaction to the notion of race-norming?

Edwards: It’s ridiculous, it’s asinine, it’s almost comedic that it would get this far. And not only that but that the NFL would be fighting a lawsuit by two Black players who say, “Hey, this isn’t fair.” And the response was to fight the lawsuit. So at the end of the day we’ve got some work to do.

Some players say their requests to be included in the settlement were rejected with insufficient explanation. From your perspective, is that common among players?

Edwards: Of course. You just get a no. But when you go back to it and start digging into it, you find out that the whole situation is race-normed, where you have to show greater decline to get the same benefits that a white player does. Because the presumption is that as a Black player, you start with lower cognitive capability to begin with. The Black dumb jock.

What would you advise the NFL to do?

Edwards: Complete transparency. “We’re going to rectify this. We’re going to go back and review every case that was turned down, Black and white. And where necessary, we’re not just going to grant access but do what we can in terms of reparations for the damage that has been done in the meanwhile.”

Do you have reason to be optimistic that will happen?

Edwards: One of the things I’m optimistic about is that there are some good people at the NFL, at the top, in the middle, and people who just came in. Coaches, administrators, front-office folks who want to get this right. Hopefully with the additional pressure of sunlight, they will have a greater chance of prevailing in terms of transparency, rectification, reparations when necessary, and turn the corner on this.

I put [NFL Commissioner] Roger Goodell in that category. I know him off-site, off-script and out of the spotlight. He’s the commissioner when he sits up in that office on Park Avenue, but as a human being and a man he’s an eminently decent guy. If I didn’t think that was the case, I wouldn’t bother bringing this kind of stuff up to him.

But this is one the whole league should get behind and say, “This is not us. This is not who we are.”

Harris had 79 tackles — one behind Dylan Moses for the team lead — 4.5 sacks and an interception as a sophomore. Top needs: RB, Edge, LB

Jackson can play in space or rush the passer off the edge. In 2019, he was the first true freshman to start a season opener for the Trojans on the defensive line since Everson Griffen in 2007 (and just the second since Tim Ryan in 1986). Top needs: OL, Edge, S

Elam took a step back after an impressive freshman campaign in 2019. He'll be hard to pass on as a 6-foot-2 corner with elite ball skills if he can fine-tune his technique and become a more reliable tackler. Top needs: CB, LB, OL

The 6-foot-5, 315 pound Nelson has developed into one of the premier pass blockers in college football. Top needs: OL, Edge, S

Cross is a powerful blocker who can do damage at the second level in the run game with premium athleticism and his target-lock awareness. Top-10 is a possibility if he develops as a pass protector. Top needs: OT, Edge, TE

Jobe would have been a day two pick had he declared for the 2021 NFL Draft, but he decided to return to Tuscaloosa for a little bit more seasoning. Top needs: CB, S, WR

The Mission Hills product shunned millions of dollars to come back for his senior season in Columbus and will likely be a top-three prospect at the position in 2022. Top needs: WR, CB, OL

Mays has the talent and size (6-6, 325) to play all five positions on the offensive line. He's likely the most refined blocker in college football. Top needs: WR, LB, OL

Hutchinson suffered season-ending ankle surgery in 2020, but he was disruptive as a sophomore in 2019. He produced 4.5 sacks, 10 tackles for loss, six pass deflections and two forced fumbles. Top needs: Edge, OL, S

This projection is based on Thomas' special talent, but he has to stay healthy and develop consistency. Top needs: Edge, WR, DT

Walker would have heard his name called had he declared for the 2021 NFL Draft, but his current developmental trajectory puts him as one of the first offensive lineman off the board in 2022. Top needs: CB, TE, S

Metchie could be the fifth Alabama wide receiver selected in the first round in three years. He had 916 yards on 55 receptions and six touchdowns in an offense dominated by Heisman Trophy winner DeVonta Smith and Najee Harris. He'll be Bryce Young's clear-cut number one target in the fall. Top needs: OT, WR, CB

Davis would've likely been the first defensive tackle selected this year had he left school — Christian Barmore was selected by the Patriots in the second round with the 38th overall pick. Top needs: WR, DT, QB

Linderbaum was recruited as a defensive lineman, but switched to the offensive line during bowl prep of his freshman season and has never looked back. He heads into the fall as the top center in college football. Top needs: OT, DL, C

Every starting cornerback for the Buckeyes since 2013 have been drafted — seven in the first round. Banks has the physical traits and skillset to keep the party going. Top needs: CB, LB, WR

The pandemic limited Karlaftis to only three games last fall (he still had two sacks), but he was an AP Freshman All-American in 2019 after producing 7.5 sacks with 17 tackles for loss as a true freshman. Top needs: DL, WR, CB

Winfrey's quickness makes him a disruptive force on the interior. He'll be the anchor of a potentially dominant Sooners defense this season. Top needs: LB, WR, DL

Look to the Chargers and Seahawks to make the playoffs

US Open: Can Phil Mickelson make the cut after A +4 Round 1

US Open: Can Phil Mickelson make the cut after A +4 Round 1

An injury could cost Jacob deGrom an award

An injury could cost Jacob deGrom an award

Here’s why the Green Bay Packers should trade Aaron Rodgers

Where is Tom Brady when Le'Veon Bell really needs him?

Saquon Barkley seemingly is vaccinated for COVID-19, because he watched Tuesday’s Giants minicamp practice from the cafeteria and interacted with colleagues with no mask on.

Dieter Kurtenbach: There’s no good excuse for pro athletes to be unvaccinated

There’s a simple question every Niners player — nay, every professional athlete — has to ask themselves these days: Do they want to play?

Clarence E. Hill Jr.: Dallas Cowboys won the offseason. So why is Mike McCarthy on the hot seat?

Optimism certainly abounds for the 2021 season and Year 2 of the Mike McCarthy era at the Dallas Cowboys world headquarters at The Star in Frisco.

Why are so many NFL players still reluctant to get vaccinated? League’s union head said it’s not because of a lack of information.

DeMaurice Smith pleaded ignorance Thursday when the NFL players union boss was asked on a conference call for the vaccination rate of his rank and file.

Gene Frenette: Plenty of incentive for unvaccinated NFL players to get COVID-19 shots

JACKSONVILLE, Fla. — There may never be a more critical six-week respite between the end of NFL minicamps and the start of most training camps in late July than this year. It could be the difference between a competitive advantage or disadvantage for every NFL team based on one simple choice: unvaccinated players deciding whether or not to get COVID-19 shots. This issue had remained somewhat ...

FILE - This Sunday, Sept. 23, 2007, file photo shows Pittsburgh Steelers' Najeh Davenport in Pittsburgh. The NFL on Wednesday, June 2, 2021, pledged to halt the use of “race-norming” — which assumed Black players started out with lower cognitive functioning — in the $1 billion settlement of brain injury claims and review past scores for any potential race bias.