Subscribe
Read Today's E-Edition
Share This
Nearing a decade in, All-American Indian Shootout a showcase Native teams are happy to call theirs
0 Comments
Share this
1 of 3 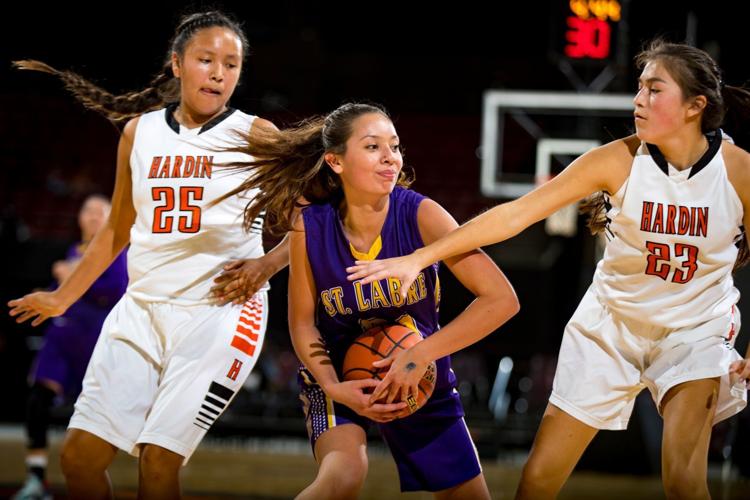 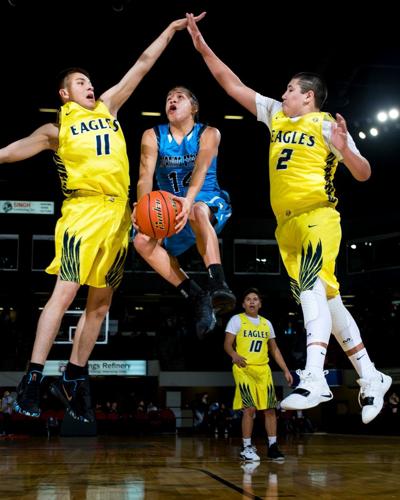 Lame Deer's Tanyon Whistling Elk (14) tries to maneuver in the air around Northern Cheyenne's Xander Ogle (11) and Sage Braided Hair (2) defend during their game in the All-American Indian Shootout at First Interstate Arena at MetraPark on Dec. 7, 2019. 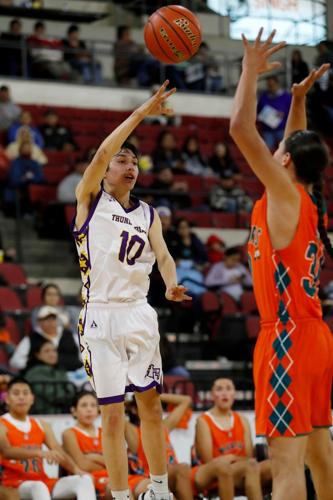 Hays-Lodgepole’s Davontae Sullivan throws a pass against Plenty Coups during their game at the All-American Indian Shootout at First Interstate Arena at MetraPark on Dec. 9, 2021.

BILLINGS — For Shawn Knife, as he takes the White Shield (North Dakota) boys basketball team he coaches to Billings this week, the trip isn't just about getting experience against new competition or bringing his players to a unique atmosphere.

For him, it's also a blast from the past he cherishes.

Knife was raised in the tiny town on the Fort Berthold Indian Reservation in western North Dakota, recalling how he watched the local high school team take on fellow Native schools from faraway lands in similar-style shootouts. But for awhile as he got older, Knife said, those types of events began to disappear.

"We used to have these all-nation classics growing up," Knife said. "I remember going to watch the White Shield Warriors when I was just a little guy at some of these things. And it went away for awhile, that whole kind of all-nations classic or even just winter tournaments in general."

Consider this year's All-American Indian Shootout — which returns to First Interstate Arena at MetraPark in Billings on Thursday — to be what fills that void again for Knife and others involved in Native American hoops, as it has every time it's been held since its first event in 2013.

White Shield will be one of two North Dakotan schools (along with Mandaree, also on the Fort Berthold reservation) joining seven varsity programs from Montana, plus Hardin's boys and girls JV teams, at the three-day event exclusively featuring schools on reservations and/or with heavy Native ties.

The Warriors, who have among the field's longest treks to Billings with an over 6½-hour drive, will bring both their boys and girls teams to the shooutout, where they'll each play Hardin's JV in Thursday's first two games followed by Two Eagle River for the boys at 1 p.m. Friday and Box Elder for the girls at 1:30 p.m. Saturday.

Knife said that White Shield's boys returned all five starters from a season ago and that he's hoping for a competitive team that improves upon its first trip to the shootout last year, which included a loss to Hardin where he said his team took "a bit of a beating."

Another team that's looking to use the competition at First Interstate Arena to its propel it forward is one that knows all about championship competition: Box Elder's girls team.

With three state championships in their history, the Bears were denied a fourth at the hands of Roy-Winifred in last year's Class C title game. The star of that team, all-state guard Kyla Momberg, now plays with sister Joelnell at Montana Western, while there's additionally a new coach on the sideline as Colby Minert fills in following Joel Rosette's departure from the program.

Box Elder activities director Neal Rosette Jr. said Wednesday in a phone call with The Billings Gazette and 406mtsports.com that he's excited to watch both Bears teams play in a new way, as he had helped boys coach Jeremy MacDonald on the sideline last season when the school also came to the Metra.

"The fact that we get to go down and showcase our talents from each of our schools — our predominantly Native schools — and showcasing their talents down there and in that type of arena, that type of setting, it's fun," Neal Rosette said. "Getting the chance and the opportunity to play where some of the state tournaments will be held is an advantage, so getting to go down there and be a part of that is ideal for our kids."

That's also one of the many parts of what makes the event so appealing to its participants: the setting, stage and atmosphere of First Interstate Arena is one high school teams rarely (if ever) see outside of the state tournament.

And with the shootout's added twist of being built for Native teams and making them the stars of the show, it makes it that much more special for those involved — and the long distances for most to Billings worth the haul.

"Everything was great," Knife said. "The hospitality of our hosts and showing us where to go ... we don't really make it to Billings a whole lot, so it's cool to make it out there."

at First Interstate Arena at MetraPark

Toby Stack and Chris Clevenger starred for Loyola Sacred Heart coach Scott Anderson in the 1990s. Now their sons are key players for the No. 2 Rams while they coach under Anderson.

The Big Sky senior has officially arrived as the Eagles' No. 1 option after mounting a fourth-quarter takeover.

Mahomes and Hurts to make history at Super Bowl LVII

Mahomes and Hurts to make history at Super Bowl LVII

Lame Deer's Tanyon Whistling Elk (14) tries to maneuver in the air around Northern Cheyenne's Xander Ogle (11) and Sage Braided Hair (2) defend during their game in the All-American Indian Shootout at First Interstate Arena at MetraPark on Dec. 7, 2019.

Hays-Lodgepole’s Davontae Sullivan throws a pass against Plenty Coups during their game at the All-American Indian Shootout at First Interstate Arena at MetraPark on Dec. 9, 2021.