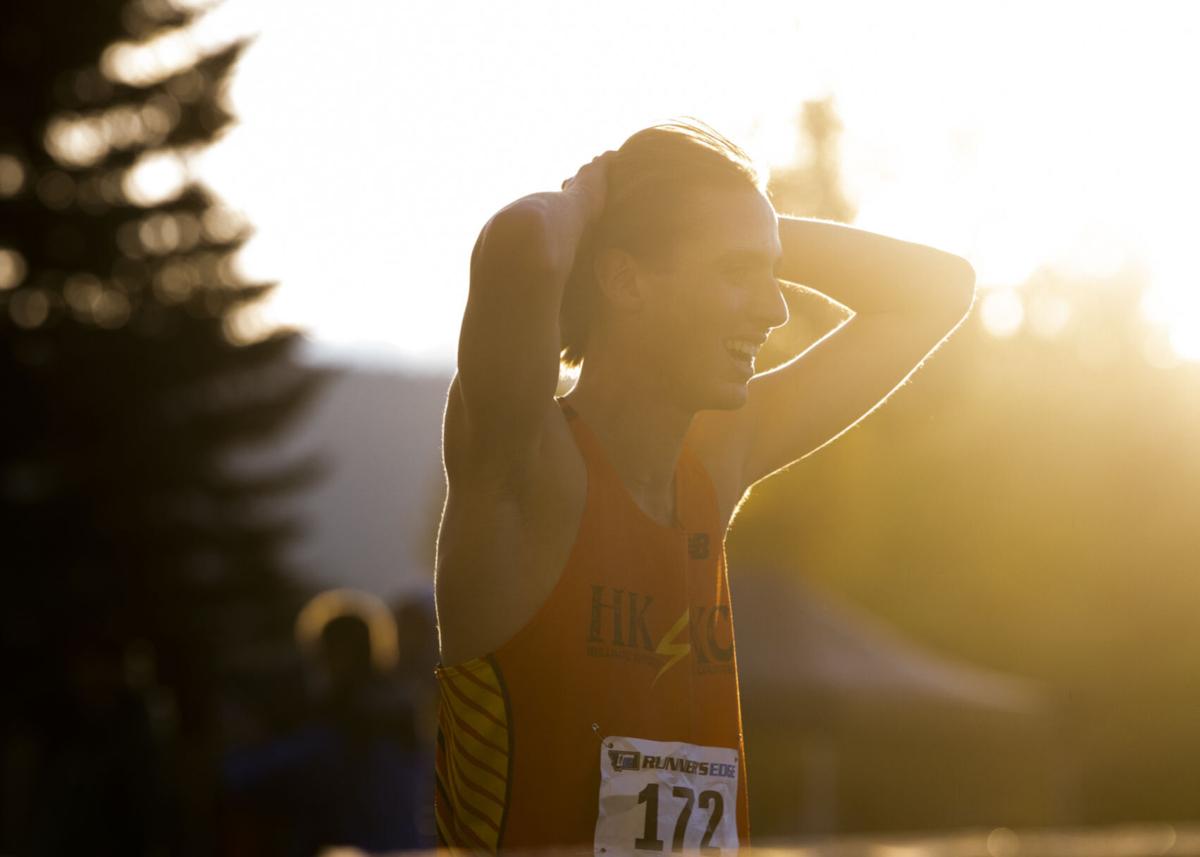 Hellgate senior Ignatius Fitzgerald, an Oregon commit, smiles as he catches his breath after crossing the finish line during the Runner’s Edge Missoula City Meet at Linda Vista Golf Course on Thursday. Fitzgerald finished first with a time of 16:12.76. 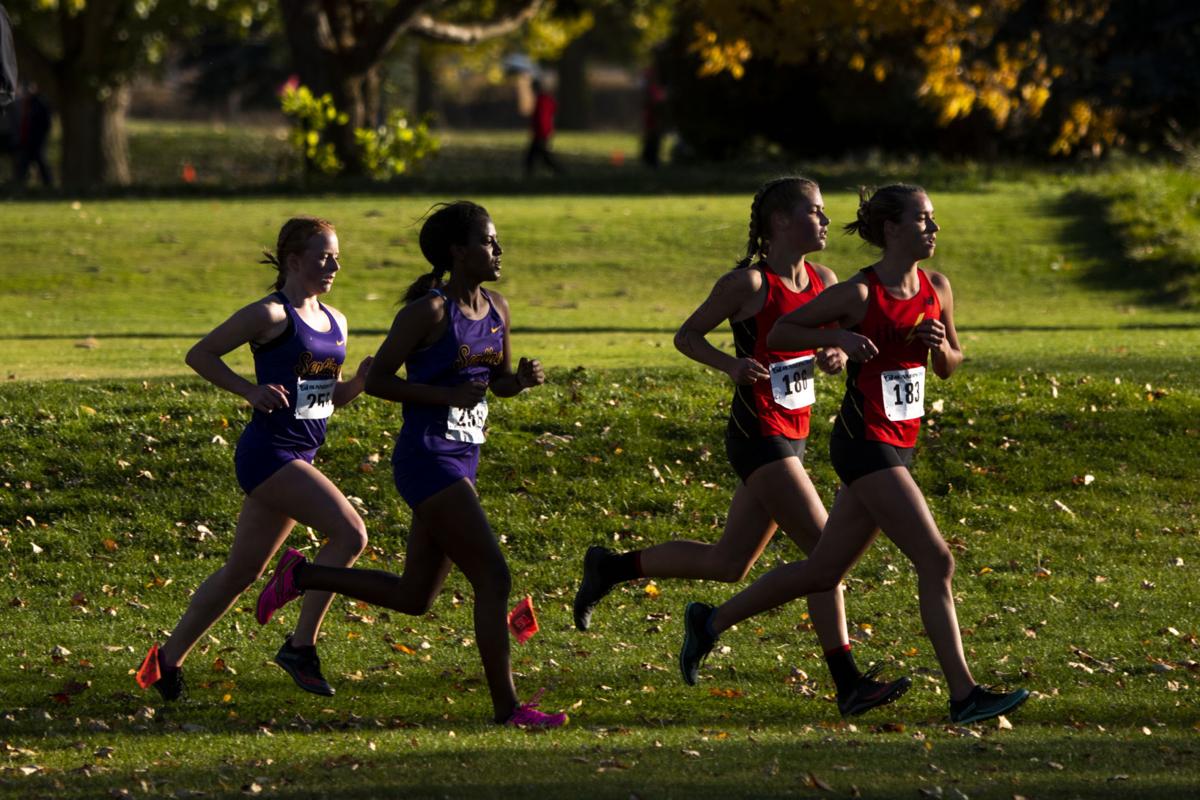 From left: Sentinel’s Lillian Commons and Rosalie Mortenson as well as Hellgate’s Aven Roberts and Annika Kendrick run a stretch of the course.

That voice was noticeably absent at the city championships on Thursday at Linda Vista Golf Course, the first high school cross country meet in Missoula following the death of Banovich, who spent 30-plus years supporting and advocating for the city and state's running communities, earlier this week.

So while the Sentinel boys team won the city title — its goal since the summer — Hammett and his runners didn’t get to hear Banovich announce them as the first-place finisher and didn’t get to have him hand them their trophy.

“I thought he always did an excellent job,” said Hammett, whose team now is on to its next goal of winning a state title. “Not hearing his voice, he’s truly going to be missed. I don’t know how you replace someone like him in the community. The running family we have here in Missoula because of him, it’s a big loss for us.”

The Spartans kept their focus and showed their depth by putting five runners in the top eight and seven in the top 12. Of their five runners who scored team points, senior Wyatt Mortenson placed second, junior Tanner Klumph took third, junior Chase Green crossed in fifth, sophomore Keagen Crosby was right behind in sixth and senior Corbin Johnson took eighth.

Some of those Sentinel runners were in all-out sprints down the stretch right next to a Hellgate runner as the teams jockeyed for a lower score. Sentinel posted a point total of 24 among its top-five finishers, eight places better than Hellgate’s 32, to win its second city title in the past three years.

“It gives us a good confidence boost heading into state,” Klumph said, “Because Hellgate is a team that’s definitely going to be up there for the state title next week, so it was good beating them.”

While not every Sentinel runner ran to Hammett’s expectation, the final tune-up against Hellgate coach Anders Brooker’s team was just what they needed heading into the state championships Oct. 24 in Kalispell.

“I knew this was going to be a dogfight,” Hammett said. “Anders is a terrific coach, and you could tell he had his guys ready to go. I think we needed a race like this to go head to head with them and get pushed because I know next week is going to be even tougher with Bozeman and Billings West.”

Sentinel celebrated and took photos with the trophy to close out an afternoon that began with Brooker sharing thoughts about his late friend Banovich and holding a moment of silence. Some Hellgate runners even wrote “Go Tony” and “Running for Tony” on their arms.

“I don’t know if that kind of stuff makes a difference halfway through a race, but I know it brought a special energy before the race,” Brooker said. “You get into a race and some of that stuff, you’re in the moment and trying to do your best. We talked yesterday about big-picture stuff, and I think it maybe brought perspective to a lot of the kids over the last 24 hours.”

The Knights had their five runners who scored points all finish in the top 11. They were led by senior Ignatius Fitzgerald, an Oregon commit, who won the individual title in 16:12.76, nearly 15 seconds better than the second-place finisher, showing that he may be peaking physically and mentally at the right time after suffering an injury in the first race of the season.

“Our message to our guys was for them to take a shot today, and they did, but Sentinel was clearly better,” Brooker said. “We think Sentinel’s the best team in the state. They came in motivated and are clicking on all cylinders and look like a team out there, which is always fun to see any group of runners who all want to be successful.

“I still walk away feeling like our boys gave their best effort, so that felt really good to see.”

Big Sky was third with a score of 85 and was led by 15th-place finisher Oliver Simianer, a freshman.

Hellgate junior Kensey May won the girls individual title to help the Knights win the city championship despite having their top runner drop out during the race.

May crossed the finish line in 18:37.20 to win her first race of the season, beating out senior teammate Abby Kendrick by about 27 seconds. Fellow senior Sage Brooks, a Syracuse commit, pulled out of the race on the final lap because of a foot injury, Brooker said.

“Kensey had a great day,” Brooker said of his runner who transferred to Hellgate from the state of Virginia because her dad is the Montana Grizzlies cross country coach. “You have to give it to a kid who transferred in, and we have a strong group of girls that have a tight relationship, and she’s fit right in.

“Outside of her physical ability, and her work ethic does match their work ethic, she’s just such a positive person for the girls to be around. It’s been a seamless transition having her join the team.”

Hellgate’s five scoring runners finished in the top nine for a score of 22. Sentinel was second with a score of 35 and was led by third-place finisher Emma Nelson, a senior.

Big Sky took third with a score of 83 and was paced by 14th-place finisher Freya Jones, a junior.

Hellgate senior Ignatius Fitzgerald, an Oregon commit, smiles as he catches his breath after crossing the finish line during the Runner’s Edge Missoula City Meet at Linda Vista Golf Course on Thursday. Fitzgerald finished first with a time of 16:12.76.

From left: Sentinel’s Lillian Commons and Rosalie Mortenson as well as Hellgate’s Aven Roberts and Annika Kendrick run a stretch of the course.