Subscribe
Read Today's E-Edition
Share This
8-Man championship: Belt rolls in second half to top St. Ignatius for first crown in 28 years
0 Comments
Share this
1 of 2 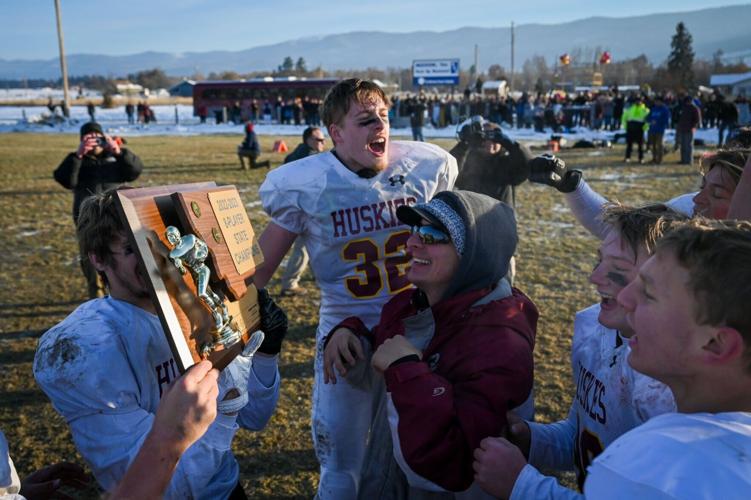 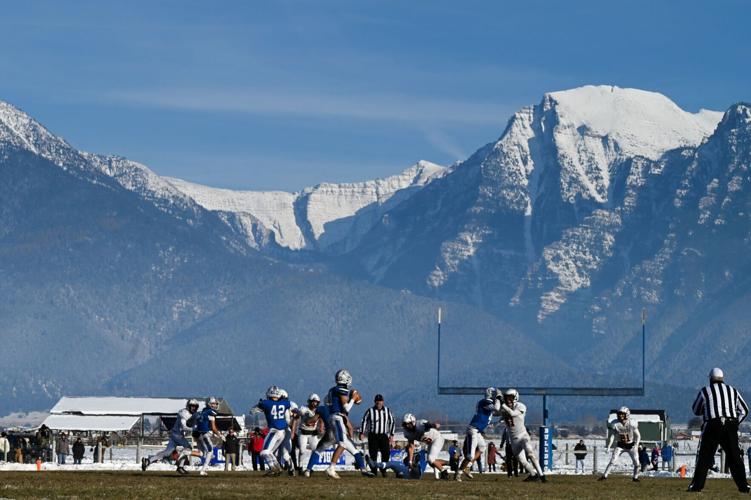 The Mission Mountains lurk in the background as the St. Ignatius Bulldogs play against the Belt Huskies at the State 8-player football final in St. Ignatius on Saturday, Nov. 19.

The game started on a hard, cold field as each team had issues with traction and getting their feet under long tosses. The first quarter ended with Mission up 6-0 after a blocked punt by Kenny Ness and recovered for the score by Canyon Sargent. They were the first points allowed by Belt in the playoffs.

But the Huskies cruised in the second half.

It was a defensive battle of unbeaten teams in the first half on a day with temperatures in the teens and fog covering the valley. By the time the fog lifted and the Mission Mountains came into view in the second half, the Huskies started to roll.

Belt responded to start the third quarter by marching down field. Garett Metrione punched it in from the 4-yard line, and Belt added the 2-point conversion to make it 22-18.

“We made some adjustments at the half that we could run on them and got it done,” Belt coach Matt Triplett said.

As the sun thawed the field a bit and the players started to get a little bit more traction, Belt started to take advantage. The third quarter ended with Belt leading 30-18.

“We really figured we could stop them on defense,” Triplett said. “We had to figure out the offensive side; they were dropping back with six guys in a zone, and they picked off a couple of our passes. They had some momentum. So, we thought, gosh, we got to run that. We have to run the ball and get them to tighten up a little bit so we can score and then get the clock to keep running.”

“We’re getting five yards a pop. That’s hard to stop.  That’s really the key for us to get the ball, get first downs, and just grind it out,” Triplett said.

Belt continued in the fourth to score and another interception by Vogl set up a reverse for an additional score making it 46-18. Not done fighting, Mission came back with a 30-yard pass to Kenny Ness to make it 46-24. An onside try by Mission failed and led to Belt’s Ethan Triplett running one in for the game’s final score 52-24.

“The first half, we didn't really execute,” Vogl said. “But the second half, we came back with fire and got our plays; everyone executed, and we won. We just kept working to get better. We just never let off. We knew we’d get to this moment. We just had to get here and win."

“These kids battled; they’re resilient. I love them to death — a lot,” St. Ignatius coach Carson Oakland said. “They battled in this game. This team (Belt) hasn’t been touched all year, and they deserve it. They’re well-coached, and they are a good football team but so are our kids. I would go to battle with our kids any day of the week. I love them.”

Nominate your picks for our November honorees.

St. Ignatius’s long wait to get back to a state championship football game is over.

Class B championship: Florence-Carlton Falcons soar past Missoula Loyola to repeat as champions

Pat Duchien Jr. totaled six touchdowns and the Florence Falcons scored the final 41 points of the game to repeat as State B football champions by beating rival Missoula Loyola.

The Rams will play in the state championship game next week after they entered the playoffs with a 4-5 record.

Check out the scoring summary.

Highlights from across the state for high school football.

'The torch was passed:' Youngsters help Missoula Loyola ram its way into quarterfinals

The Rams entered the postseason with a 4-5 mark and were one of just two teams with a losing record to win a playoff game last week in any classification.

The Golden Eagles hosted the Billings Central Rams in Lewistown in a rematch of earlier this season for the Class A championship.

Tunisia our inspiration says USA captain ahead of Netherlands match

The Mission Mountains lurk in the background as the St. Ignatius Bulldogs play against the Belt Huskies at the State 8-player football final in St. Ignatius on Saturday, Nov. 19.