Brandon Berthelson of East Glacier Park, Montana, holds a sign supporting the Black Lives Matter (BLM) and Missing and Murdered Indigenous Women (MMIW) movements next to his car near the west entrance of Glacier National Park in June. Berthelson and his son Noah have launched a campaign to boycott Darby football following the Darby School Board's decision to retain head football coach Jeff Snavely despite his posting an apparently racist comment on Facebook. 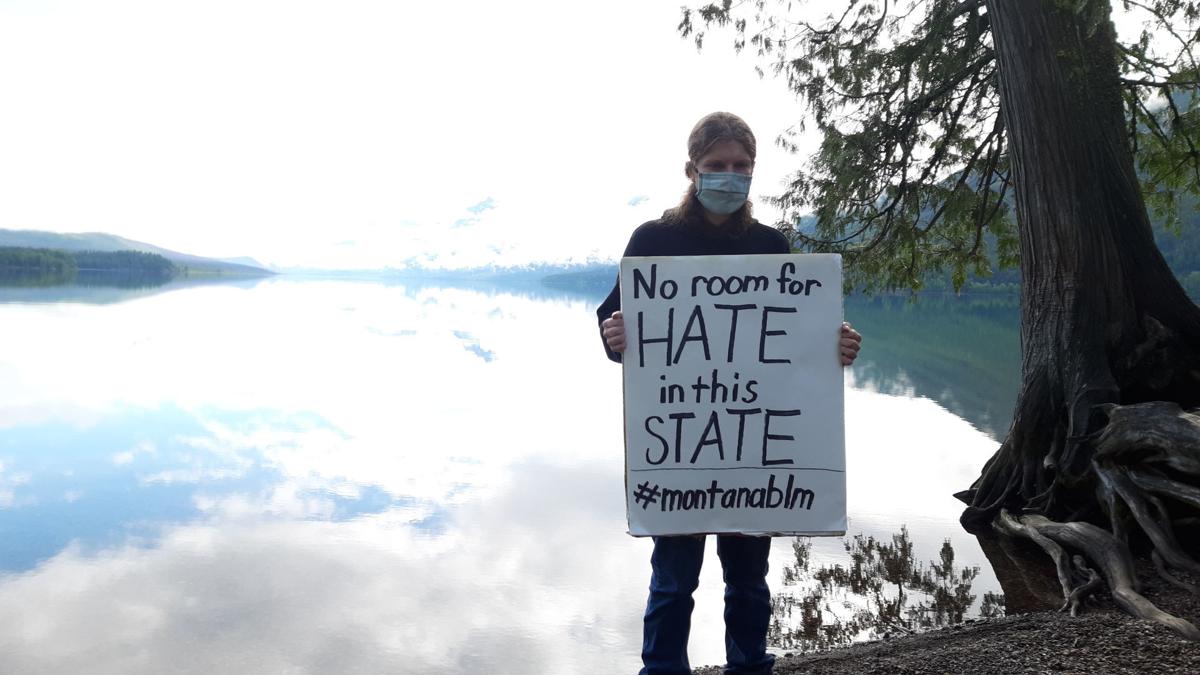 MISSOULA — The Darby High School football team won’t be playing any games this fall if a father-son duo from northwest Montana gets their wish.

Brandon Berthelson, an elementary school teacher and former high school wrestler who lives in East Glacier Park on the Blackfeet Reservation, and his son Noah, the valedictorian of the 2020 graduating class at Browning High School, have launched a campaign to boycott Darby football games. Their mission follows the school board’s decision last Thursday to retain seventh-year head coach Jeff Snavely despite his allegedly racist comment that advocated violence in a Facebook post about Black Lives Matter demonstrators.

Snavely has said he regrets the words he used in the post but also maintains he's not a racist. The school board voted in a meeting last week to discipline the coach and will work with the superintendent on details.

Two days after the school board's decision, the Berthelson father and son team emailed a letter to the principal of Darby High School and to the principal of each of the eight schools on Darby’s football schedule for this coming season. The letter describes who they are, the aim of the proposed boycott and reasons they believe the boycott is justified.

" … (Our) educational institutions are places where children prepare to enter their adult lives productive and fulfilled, not filled with fear and misinformation about the role of protests to a functioning democracy," reads part of the document proposing the boycott. 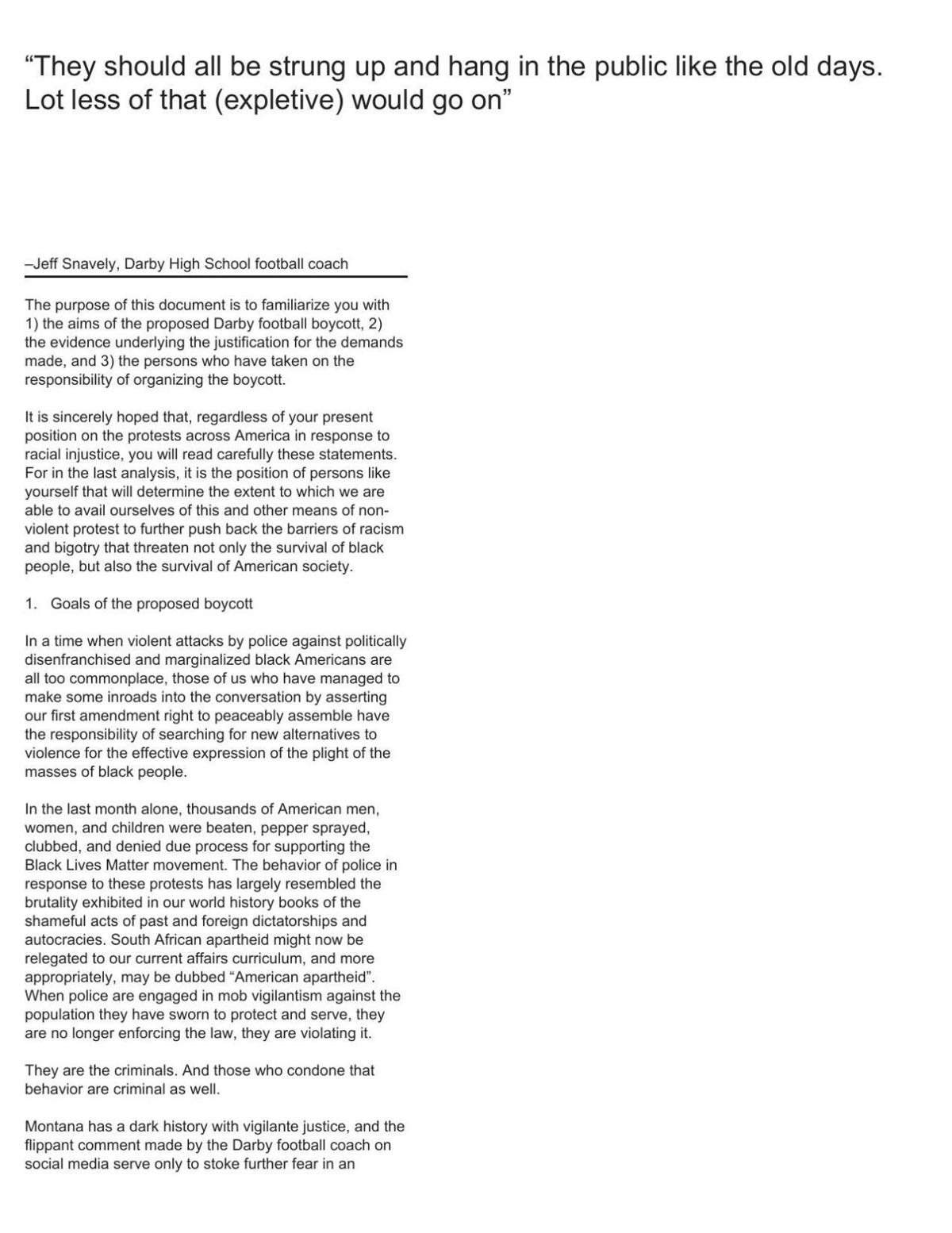 “We hope that one result of the boycott will be canceled games,” Noah told the Missoulian in a phone interview. “If schools refuse to compete against Darby, the legitimacy of their football program will come into question every week until the school takes the appropriate action and fires Jeff Snavely permanently.”

Brandon added: “We’re confident that our call for a boycott could garner a lot of support from educators across the state, let alone in the area, in the schools that are slated to compete against Darby this fall. If more and more teachers, more and more principals get on board, eventually Darby won’t see a point in having a football program at all because the students involved in the program will never have an opportunity to play a game. At that point, they’ll get serious, and they’ll seriously reconsider Jeff Snavely’s employment.”

Darby Athletic Director J.P. McCrossin, who had also been the principal through the end of the school year, confirmed Monday he received the email about the proposed boycott, but he declined to comment to the Missoulian. He said he has been forwarding emails about Snavely to incoming superintendent Chris Toynbee because Toynbee and the school board, not McCrossin, are handling disciplinary measures.

A phone call to Darby High School seeking comment from Toynbee wasn't answered Monday afternoon. Dan Johnston, the former superintendent, also declined to comment, noting he's no longer in that role and was in a transition that was underway before the controversy.

Snavely made the comment that set off the dispute about his employment in a Facebook post about Black Lives Matter protesters in Salt Lake City on May 31, writing that “they should all be strung up and hang in the public like the old days. Lot less of that sh-t would go on.”

His comment, which was a reply to a post supporting law enforcement, has since been deleted. Snavely could not be reached via voicemail Monday afternoon about the boycott, but he earlier said he regretted his social media post.

"I'm deeply regretful that I posted that," Snavely said during the school board meeting last week. "It could have been worded differently and none of this would have been an issue. That is my problem to bear.

".… I take full responsibility for my poor judgement posting a comment that resulted in criticism and embarrassment."

The Darby School Board decided Thursday to reprimand Snavely at a future date instead of firing him. More than a dozen citizens were on the Zoom call, many of whom were or are educators, and largely agreed Snavely should be fired. Snavely coaches but doesn’t teach at Darby.

"Whether or not he wanted to, he injected race into the discussion of high school sports in Montana, and by failing to take the correct action and terminate his employment, Darby High School is insisting that this remain a topic of conversation well into the next school year," the proposal said.

Brandon, a fourth-grade teacher at Napi Elementary in Browning, said he knows the important role adults play in shaping children. He also said that because of his time participating in wrestling, speech and drama at Conrad High School, he knows kids trust what coaches say.

“I’m afraid that if this coach wants these students to judge people differently because of the color of their skin or the political attitudes they hold and be OK with vigilante justice, then that attitude will pervade and will make the problems that face kids on the reservation even worse,” Brandon said.

Noah and Brandon said they've also noticed the need to stand up for minorities because of the lack of racial diversity in Montana public schools. Native Americans are the largest minority population in the state, making up 11.4% of K-12 students in Montana public schools, compared to 1.1% in the country. Of K-12 students in Montana, 80.5% are white and 0.9% are Black, compared to the national averages of 51% white and 15.7% black, according to 2013 data from the United States Department of Education.

“If Darby Schools does not fire the coach, their message will be clear that they want that number (of Black students) to be even smaller than that,” Noah said. “I don’t think that they should stand by someone who calls for violence and vigilante quote-unquote justice against peaceful protesters."

Noah knows about being active in protests, using the voice he’s developed over the past four years on Browning’s speech and debate team and in the National Honor Society. The future University of Montana student who will be studying political science first got involved by leading a March for Our Lives walkout at Browning to protest gun violence following the shooting at Marjory Stoneman Douglas High School in Florida in February 2018 that left 17 dead.

That was a pivotal moment for Noah and Brandon to take a larger stand in trying to enact change for the positive. They’ve also found hope for change by reading about previous successful protests, including that of sprinters John Carlos and Tommie Smith at the 1968 Olympics in Mexico City. Carlos and Smith raised their fists on the medal stand, leading to them being expelled from the Games. They were inducted into the U.S. Olympic and Paralympic Committee Hall of Fame 51 years later this past September.

“Just looking at successful examples in the recent past and in the distant past about standing up for systemic change and standing up for racial justice, we were just inspired by that and thought that if people were willing to stand up with us, they would be willing to say that we need to change things in Montana,” Brandon said.

More recently, Brandon and Noah have participated in protests for Black Lives Matter and for Missing and Murdered Indigenous Women in Kalispell and at the west entrance of Glacier National Park, where they make sure they're stationing themselves in the areas where the park's webcams are positioned.

“The Missing and Murdered Indigenous Women movement is getting a lot of attention, too,” noted Brandon, who's related to the Blackfeet and Chippewa tribes through marriage. “I think that the goals of the Black Lives Matter movement and MMIW are really one and the same. It’s to bring light to the systemic injustice that makes it almost impossible for minorities to succeed in America today.”

Brandon and Noah haven't been threatened at the protests they've attended, but Brandon fears that Snavely's words will allow others to feel that violence is warranted against them or any protesters.

“When I see people exercising their First Amendment rights in this, which is probably the most crucial and critical time that I’ve ever witnessed … it’s terrifying to think that people are OK with me and my son being executed for standing up and speaking out in favor of Black Lives Matter,” Brandon said.

Whether Brandon and Noah take further action to protest Darby depends on the response they get from the principals they emailed.

“We decided that a boycott could be an effective way to keep this in the news cycle and to continue to bring media attention and public attention and awareness to the problematic hiring of this coach,” Brandon said. “His presence there is still a problematic issue.”

Bergen committed to MSU before the Bobcats changed head coaches.

MISSOULA — Kalispell Flathead appears to have a new football coach after three months without a leader.

Brandon Berthelson of East Glacier Park, Montana, holds a sign supporting the Black Lives Matter (BLM) and Missing and Murdered Indigenous Women (MMIW) movements next to his car near the west entrance of Glacier National Park in June. Berthelson and his son Noah have launched a campaign to boycott Darby football following the Darby School Board's decision to retain head football coach Jeff Snavely despite his posting an apparently racist comment on Facebook.