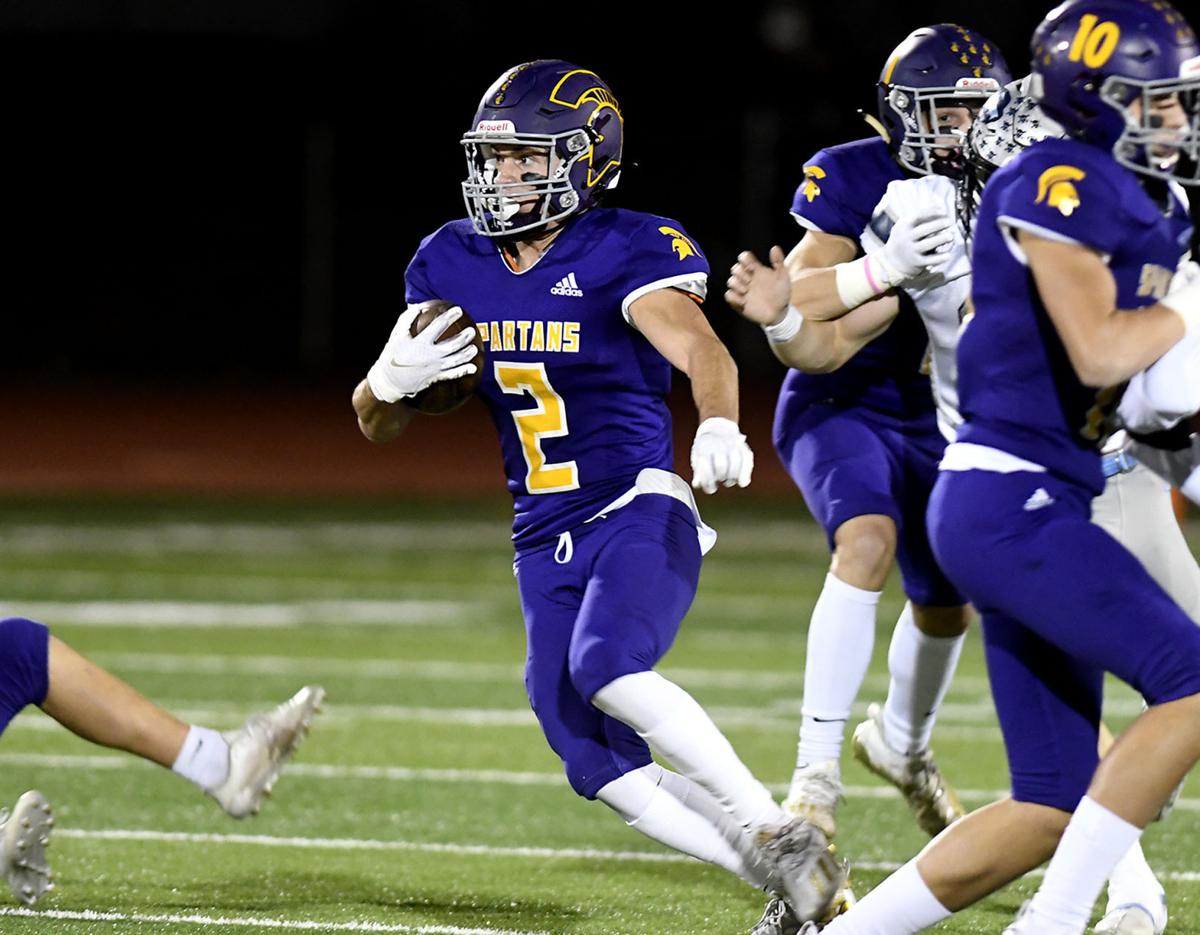 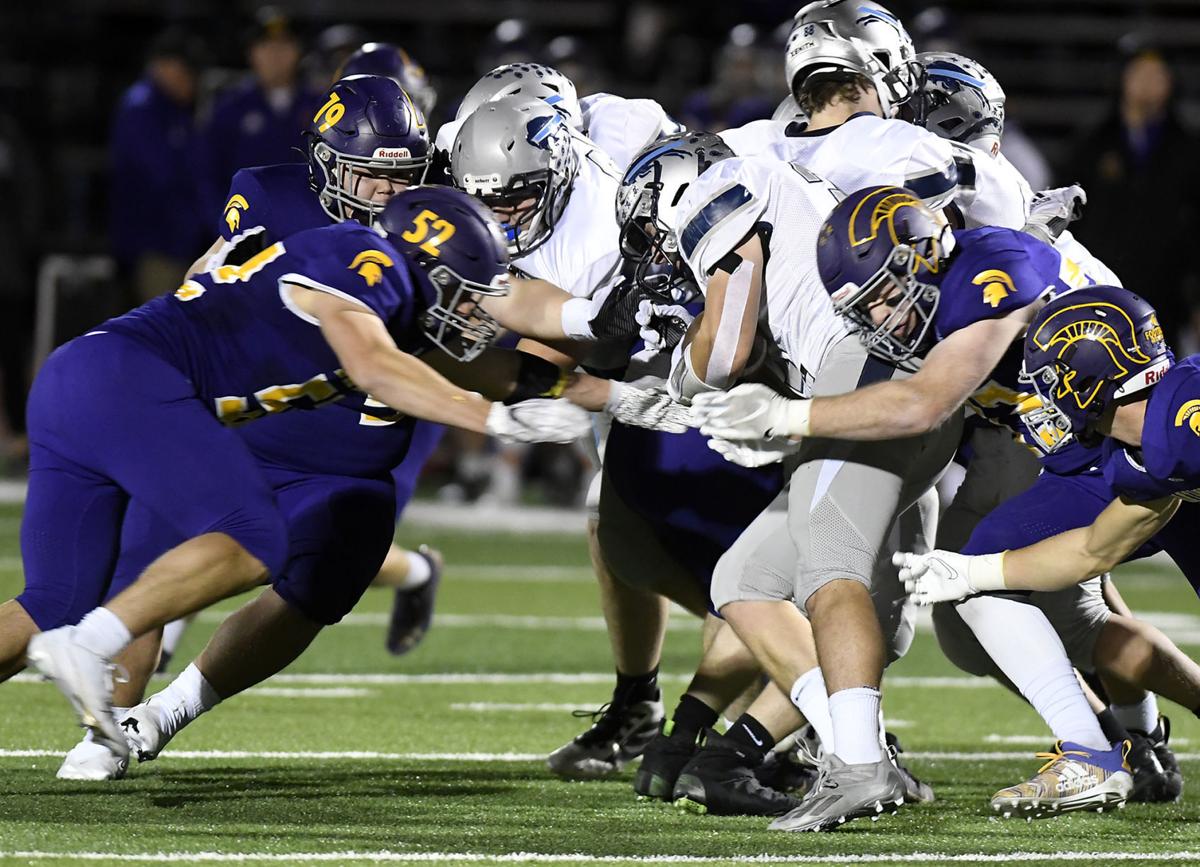 The senior defender got around the edge and swatted a pass from Bison quarterback Reed Harris straight to the turf. If Kirgan realized where he was, yards away from the end zone, he could have had a pick-six just minutes into the game.

Kirgan, who had already made a few plays in the backfield by chasing the Bison star quarterback out of bounds on a few scrambles, settled for a swat.

"I just didn't catch it — I just went with the swat. I wasn't even thinking. I was kinda kicking myself after that," Kirgan said.

The play highlighted a fast start to one of the strongest defensive showings that Spartans coach Dane Oliver has been a part of, and one of the more dominant ones fans may see.

The Spartans won 35-0 at home at Missoula County Stadium to move on to the AA semifinals where they will face Kalispell Glacier, who gutted out a win of their own at Butte Friday night. Looking at the Spartans' score, it appears as just another multi-touchdown win the team has been accustomed to this season. But looking at the stats there is a major number that sticks out: zero.

The Bison were held to zero first downs and had two yards of total offense.

Great Falls was credited with a single yard on the ground, and a single yard in the air on 29 offensive plays according to stats provided. At halftime the Spartans had kept the Bison to negative seven yards. Harris, a star athlete for the Bison, was held to 2 of 11 passing and negative seven rushing yards on 11 attempts.

"It's a testament to the kids and our defensive staff and the game plan the put together," Oliver said. "It's hard for teams to win when they can't get a first down or score. ... Against an opponent with a high caliber quarterback like that, I have not been a part of anything like that. It was unbelievable."

Oliver did give credit where it was due, as the Bison defense played well and challenged the Spartans by picking off Spartans senior quarterback/defensive end Zac Crews twice and making things clunky for Sentinel early.

The Spartans scored just once in the first quarter before scoring 28 in the second and third quarters.

Crews finished with 90 yards and a touchdown on the ground. From the air, he was 13 of 18 passing with two interceptions and a score to Tyler Christensen. On defense, Crews tallied five tackles, a team-high three for a loss and .5 sacks. Seven Spartans recorded tackles for a loss, including Kirgan who finished with four tackles and one for a loss, as the defense as whole had nine.

Offensively, Adam Jones recorded most of the scoring with three rushing touchdowns and 99 yards. The Spartans gained 205 yards on the ground and 129 in the air.

The win, given the circumstances of it being the Spartans' playoff opener and their 19th win in a row, was as impressive as the undefeated Spartans have had this season. It may be more impressive than the Spartans gutsy, heroic win over Billings West in the opener, or the defense's showing against Montana Grizzlies commit Kaden Huot on the road.

A few weeks ago, following a 32-0 shutout over Helena Capital, Crews said confidently that the team motto is "no one runs on us."

In the two games since he said that on Oct. 15, Butte High and Great Falls High have run for 84 and one yard for a combined total under 100 yards across two weeks.

That motto sure seems like it is holding true.

"We like to think nobody can run the ball on the Spartans especially at home," Kirgan said. "I think we have kinda proved that over the course of the season. We just try to keep that our motto. We work our butts off in practices — our practices are next level."

If anyone can run on Sentinel, it may be Glacier which gave the Spartans an early season scare at home in a 28-21 Sentinel win for their second-closest game of the year.

Ryne Nelson coached the Broncs for five seasons and made the Class A state playoffs each season.