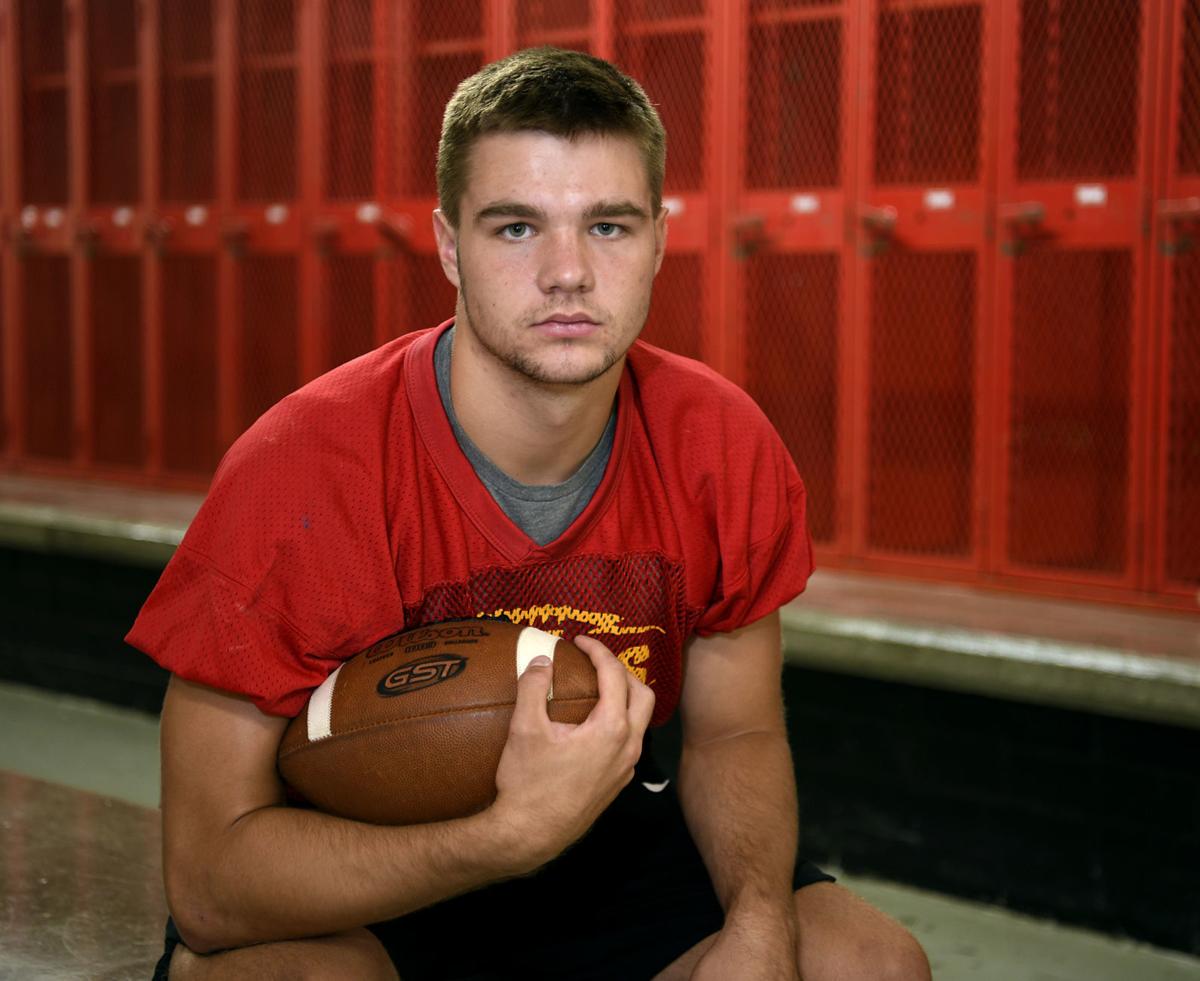 Missoula Hellgate senior Rollie Worster is ready for his third season as a starting quarterback/hybrid defensive player for the Knights' football team. Heading into year three as a football program after forfeiting the entire 2016 season, Worster & Co. have higher expectations and are seen as a potential darkhorse coming into the 2019 Class AA campaign. 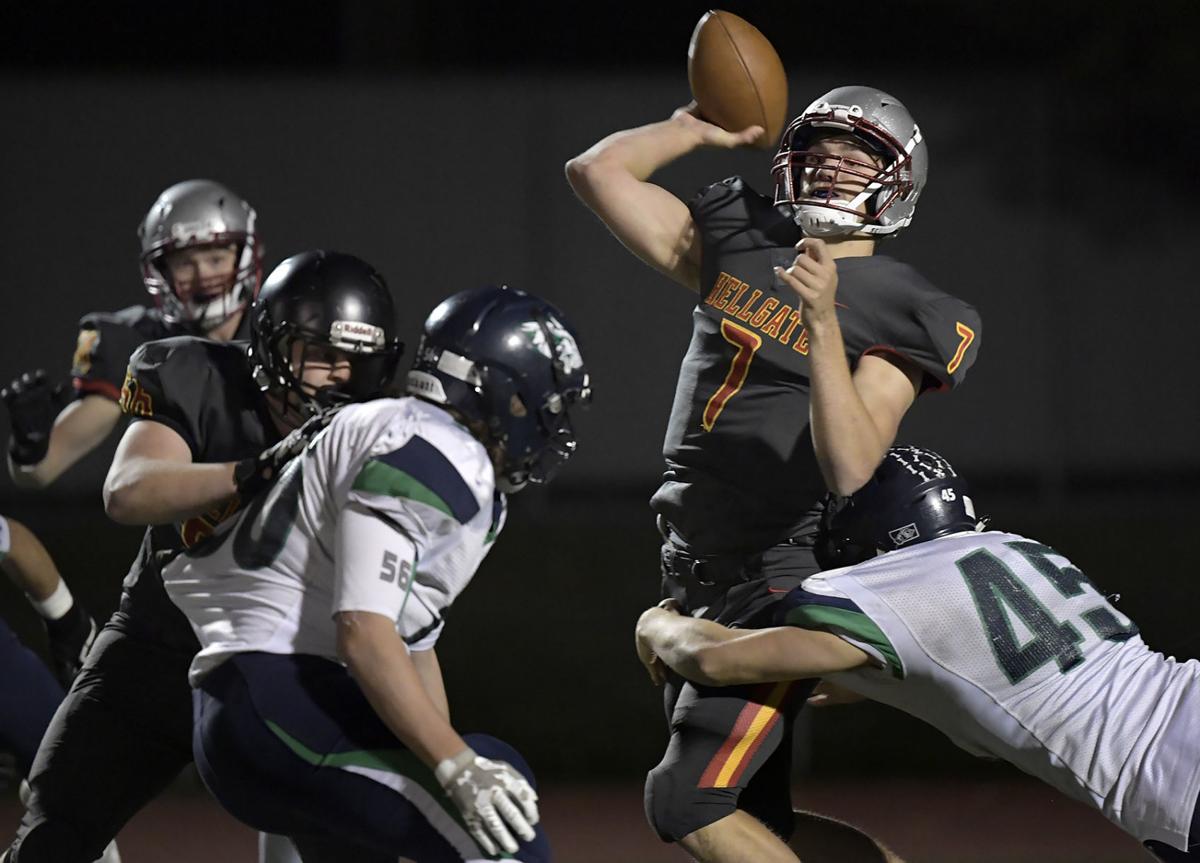 Missoula Hellgate's Rollie Worster throws a pass against Kalispell Glacier last October. In his second year as the starting quarterback in 2018, Worster threw for 1,789 yards and nine touchdowns while also running for 1,158 additional yards and eight more scores.

MISSOULA — Consider this a year for Missoula Hellgate to start reaping the benefits.

After not fielding a varsity football team in 2016, the Knights began a long rebuilding project in the fall of 2017 as they made their way back onto the field with a batch of fresh faces.

The growing pains were there as the Knights played to an 0-10 record. Simply retaking the field was considered a win.

Last year things started to click. The Knights still took their lumps, but a win over Great Falls CMR snapped a 57-game losing streak — including the 2016 forfeited season — dating back to Oct. 5, 2012. The following week, a win over Billings Skyview made it two in a row, though Hellgate ended the season 2-8.

Still, the progress was there.

Now, the Knights come into the 2019 Class AA season as a team with plenty to be excited about. Now in year No. 3, the long-term plan set up by Hellgate coach Mick Morris and his staff as well as the players who have stuck with it is in the stage where results are expected.

"Our expectations are in a place where they haven't been in a couple of years," Morris said.

Entrenched in this rebuilding process is two-sport standout Rollie Worster, who has seen his fair share of ups and downs throughout his time at Hellgate. One of the team's 23 seniors, Worster started at quarterback in 2017 as a sophomore as well as on the defensive side. He did so again in 2018 where he was named first-team all-state at safety and honorable mention at QB.

The gridiron has been a different world for Worster, who has been a starting varsity basketball player since the minute he stepped onto campus as a freshman. On the hardwood, Worster and Hellgate have seen plenty of success as perennial contenders, including last winter when Worster won the Gatorade player of the year award while leading the Knights to the State AA championship game.

He's ready to find that success in football now.

"I just think coming up with the same guys since freshman year and building the program up pretty much from the bottom has been fun," Worster said. "Just super excited to go out there and compete. I think we have a good chance of having a successful year."

"We definitely wanted to bring it back," Worster said. "The past three years that's been our main goal in getting some success in the program and build it.

"I just think the big thing coming in was we knew we wouldn't have that varsity team. So we wanted to come in and compete and work hard and try to get back to the highest level we could."

And restarting the program so young was a little shocking for Worster and many of the younger guys who were thrown into the fire right away.

But Morris had faith in his guys and his young quarterback.

"Early on he was just a good athlete," Morris said. "The thing that's really been impressive, especially the last couple of months, has been his leadership. He's a pretty reserved and quiet kid so I think its out of his comfort zone, but he's done a good job with it."

The team goes where Worster goes and his stats reflect that from a season ago. According to Hellgate's Maxpreps page, in 10 games as a junior, Worster completed 112 of 256 passes (43.7 percent completion rate) for 1,789 yards and nine touchdowns to 16 interceptions. Worster also carried the ball 205 times for 1,158 times and eight more scores.

Defensively, Worster racked up 143 tackles, 93 of which were solo, which led the team in both categories by more than double of the next closest player.

A good season mixed with some mistakes, but Worster knows that and understands he had some areas to improve. Notably on the offensive side, he said seeing the full field and making pre-snap reads quicker are areas he worked on in the offseason.

"He has incredible vision and he understands angles," Morris added. "So he's able, at least on defense, to get to plays quicker because he diagnoses a play and gets downhill. And at QB, he can just see things and I think that's pretty rare. That's one of the biggest things I've been impressed with."

The plan for Worster is to set things up to where he's pretty free especially on defense to make plays. Offensively, Worster has seen his skills become refined after being what Morris described as "an athlete playing quarterback." Now, he's gotten to the point where he's honed his craft.

Practices have been more focused than years past with expectations now higher than normal.

"Everyone's a little more into it now that we have the varsity program back and have had some success," Worster said. "There's a lot more hope coming in and everyone is a little more jacked up to go out there and play."

Sports have dominated Worster's life and he wouldn't have it any other way. His family is his biggest motivator with Worster adding that he's always been super competitive with his two older sisters, Sami and Shannon, the latter of whom just won an NAIA women's basketball national championship with Montana Western in March.

Worster's future is as wide open as Hellgate's football season, too. Basketball seemed to be his future after he verbally committed to Montana as a sophomore to continue his basketball career. However, over the summer Worster opted to reopen his recruiting for what he said was an opportunity to "wait for what I think is best for me and my family and then I'll make my decision."

He added, "I think I have a lot of opportunities. I still love where I was at before but I think I can make some more of what I have."

His future is a question he won't stop fielding anytime soon, but Worster said it isn't overbearing when thinking about what options lay before him. He knows that when the time comes he'll make the decision he feels is best for him, and blocking out any noise and distractions isn't difficult for the senior.

Morris knows just how special of an opportunity Worster has, whatever he opts to choose.

But for now, Worster's focus is football and enjoying his final ride at Hellgate. The past three years flew by and graduation will be here before he knows it.

Only difference is the expectations the Knights carry into the fall, something Worster and Co. hope to fill.

"I think we're just super excited. I get chills thinking about making some noise this year," Worster said. "Just going out there and playing hard is the biggest thing for us. After coming up with these guys from freshman year, it's our last year of high school football, and we're just excited to get out there."

Kyle Hansen covers Griz men's basketball and more for the Missoulian and 406mtsports.com. Email him at kyle.hansen@406mtsports.com or follow him on Twitter at @khansen406

Missoula Hellgate senior Rollie Worster is ready for his third season as a starting quarterback/hybrid defensive player for the Knights' football team. Heading into year three as a football program after forfeiting the entire 2016 season, Worster & Co. have higher expectations and are seen as a potential darkhorse coming into the 2019 Class AA campaign.

Missoula Hellgate's Rollie Worster throws a pass against Kalispell Glacier last October. In his second year as the starting quarterback in 2018, Worster threw for 1,789 yards and nine touchdowns while also running for 1,158 additional yards and eight more scores.