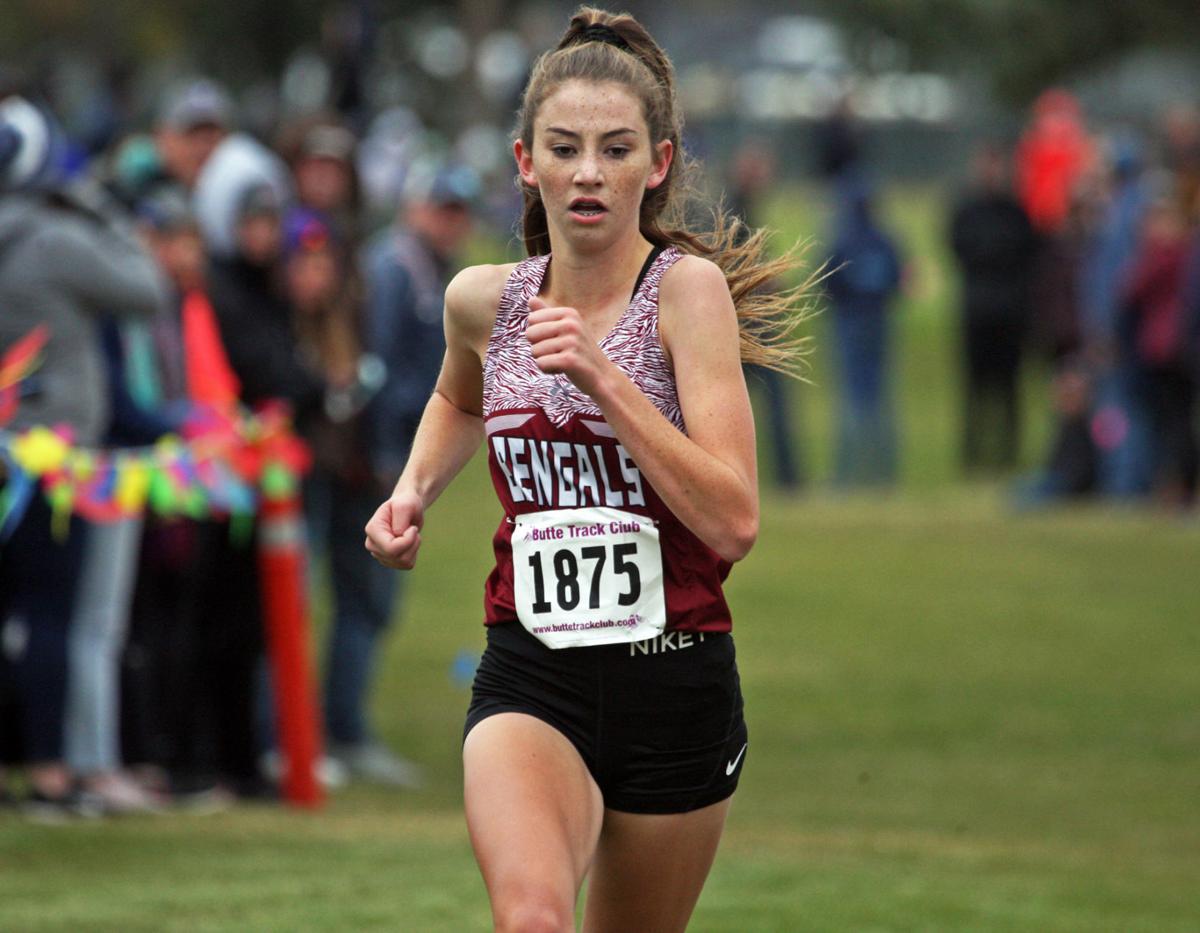 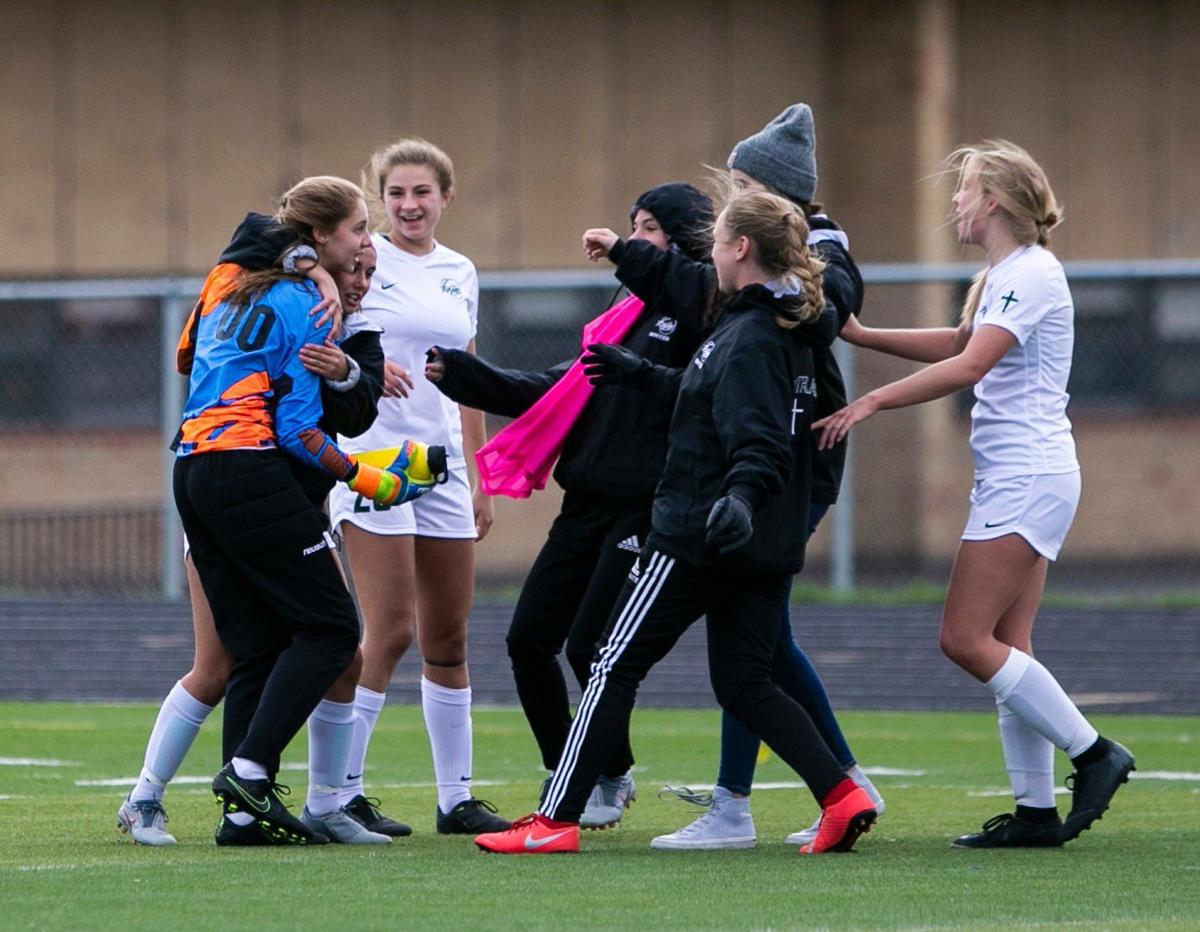 Billings Central celebrates a 2-0 shutout victory over Laurel on Saturday.

Billings Central celebrates a 2-0 shutout victory over Laurel on Saturday.

• Shane Girres rushed for 117 yards and accounted for five touchdowns as No. 7 Great Falls Central rolled up 38 first-quarter points and routed Rocky Boy 60-20. Girres, who scored on all four of his rushes, ran for 35 and 10 yards, tossed a 2-yard pass to Nick Scott and then raced 45 yards for a TD to give the Mustangs a 30-0 lead. He also scored from 27 yards away in the second quarter and compiled 117 yards total on the ground.

• Seeley-Swan boosted its record to 4-2 with a 52-0 win at Victor. Dakota Wood scored three touchdowns for the Blackhawks, including two on 10-yard runs and one on a 65-yard pass from Owen Mercado, who tossed two TD passes. Victor fell to 0-6.

• Big Sandy, ranked No. 2 behind Wibaux, used four rushing touchdowns by Kade Strutz in beating Hobson-Moore-Judith Gap 53-6. Strutz, who rushed for 193 yards on just seven carries, scored on runs of 52, 70, 15 and 41 yards for the Pioneers. He also caught two passes for 29 yards, including a 20-yard scoring pass from Parker Proulx. Big Sandy (6-0) led 47-0 by halftime. The Pioneers' Kody Strutz returned a pass interception for a TD and also rushed 35 yards for another score. Big Sandy rushed for 317 yards.

• Elijah Byrd had 285 yards and six touchdowns rushing, returned one of his two interceptions 55 yards for a score, recovered a fumble in the end zone for his eighth TD and recorded 15 tackles for Gardiner in a 69-30 drubbing of Valley Christian. Evan Guengerich chipped in with three receptions for 82 yards and two TDs, and also had a 61-yard interception return for a score and a caused fumble for the Bruins.

• Denton-Geyser-Stanford beat conference foe and 10th-ranked Geraldine-Highwood 19-6 for its third straight victory. The Bearcats (3-3, 1-1) built a 19-0 lead through three quarters thanks to a 20-yard touchdown pass from Dylan Taylor to Brodie Goodhart, a 35-yard TD run from Taylor and a 12-yard TD pass from Ace Becker to Zach Solomon. The loss ended a three-game winning streak for the Rivals (3-2, 1-1).

• Helena knocked off Kalispell Glacier 25-15, 25-22 and 25-12 as Elizabeth Heuiser had 17 kills and five aces, both team highs. Emily Feller pitched in with 28 assists and nine digs, while Brooke Ark also added 12 digs and a team-high three aces.

• Hardin was outhit, but Rilee Green and Kailee Roan combined for 39 of the Bulldogs’ 93 digs in a 25-21, 25-23, 25-21 win over Livingston. LeFaye Russell had nine kills for the Bulldogs, who finished with 35 to Livingston’s 44. Shanie Johnson and Skylar Higgs had nine kills to lead the Rangers, who received 23 digs from Brylea Beye. Green had 21 digs and Roan 18 for Hardin.

• Kaiah Moore had 23 digs and three aces, and Lilli Ridgeway knocked down 11 kills for Whitefish in a 25-20, 27-25, 26-24 sweep of Hamilton. Katelyn Dickemore led Hamilton with five kills, seven assists, 13 digs and four aces for the Broncs.

• Gracie Tooke led with 10 kills, Hannah LaBree added 14 assists and Heather LaBree pitched in with 12 digs to power Ekalaka to a 25-19, 25-15, 25-21 sweep of Jordan. Heather LaBree had five of Ekalaka's 15 aces. Lindsay Lawrence's seven kills and 20 digs topped the Mustangs.

• North Star won the 14th annual North Star Knights Showcase for the third consecutive year by defeating Power 25-21, 25-13 in the championship bracket in Rudyard. North Star downed Chester-Joplin-Inverness 25-12, 25-23 and Power toppled Big Sandy 25-20, 25-23 in the semifinals. The Knights went 4-0 in the tourney.

• Darby earned a convincing home win over Hot Springs 25-12, 25-11, 25-21. Libby Schlapman had three kills and two blocks for the Tigers. Katelyn Christensen had 11 kills for the Savage Heat.

• Emma Stevenson had nine digs and six aces, and Sariah Maughn added six assists and four aces for Seeley-Swan in a 25-22, 25-17, 25-22 sweep at St. Regis. Ashley Wilson had four aces and three blocks for St. Regis.

• Travis Robertson started the scoring, Josh Wilcox made it a two-goal game and Helena downed Missoula Big Sky 3-0 on Give Cancer the Boot Day.

• Chris Meza scored two goals and added an assist, and Ryan Quinn and Aidan Adamek each had a goal and assist for Helena Capital in a 6-1 romp over Missoula Sentinel on Give Cancer the Boot Day.

• A second-half goal by Jackson Coles on an assist from Carter Evans was all Bozeman needed for a 1-0 Eastern AA triumph over Billings Senior.

• Ethan Hann scored two goals, including the tie-breaker in the 68th minute, as Great Falls spoiled Senior Day for Belgrade, 3-1. Corbyn Smyth scored the Bison's third goal. Alessandro Pio scored the equalizer for Belgrade midway through the second half.

• Zane Elliott had a goal and an assist as Kalispell Glacier whitewashed Butte 4-0. The Wolfpack outshot the Bulldogs 20-1.

• Ethan Meccage's first-half goal proved to be the difference as Laurel clinched the first Eastern A regular-season title in program history with a 1-0 win over Billings Central at the Laurel Sports Complex. Meccage's game winner came at 26:56, a bouncing shot to the lower right corner.

• Madison Becker scored the first three goals and assisted on the fourth, and Alma Patrick added a goal and an assist as Kalispell Glacier coasted past Butte 5-0. Emily Cleveland assisted on Becker's second and third goals.

• Billings Central gained a measure of revenge with a 2-0 win to even the regular season series with Laurel. Both teams are tied for first in the Eastern A, with the Rams holding the edge with the tie-breaker. Zoie Althoff scored both goals for Central. She scored on a penalty kick at 6:03 in the match and added an insurance goal at 18:33.

• Missoula Loyola moved to 5-2 with a 5-3 home victory over Hamilton as Lani Walker scored three goals and assisted on another for the Breakers. Giselle Huffman also had an assist and goal for Loyola. Rylee Wiediger scored two goals for the Broncs.

• Owen Smith of Billings Senior and Kylie Hartnett of Helena were the individual winners at the Butte Invite. Smith's winning time was 15 minutes and 50.1 seconds, 10 seconds ahead of Great Falls CMR's Connor O'Hara. Bozeman easily won the boys team title with 38 points, 53 better than Senior. On the girls side, Hartnett led from start to finish and had a personal-best 17:38.5 in winning by 20 seconds over Bozeman's Terra Trom. The powerful Hawks nevertheless won the team crown with 31 points, well ahead of Helena (73) and Kalispell Flathead (81).