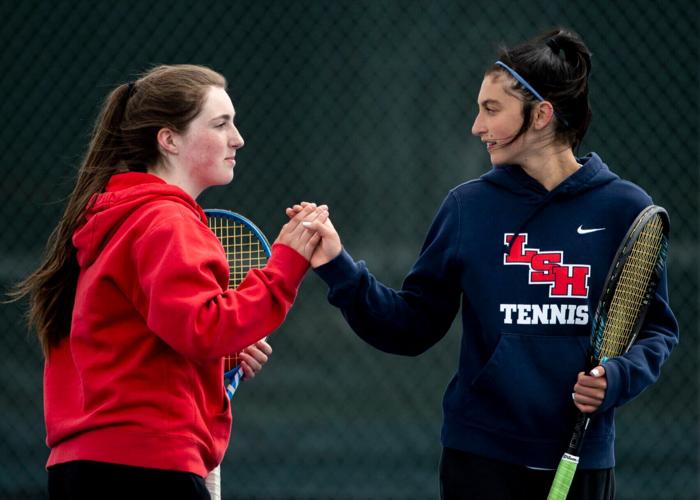 Missoula Loyola's Ava Bellamah, left, and Gio Horner congratulate one another during their Class B-C divisional semifinal doubles match on Friday at Fort Missoula. The duo stayed undefeated with a 6,0, 6-0 win over Anaconda's Farahbeth Barrington and Samantha Staley. 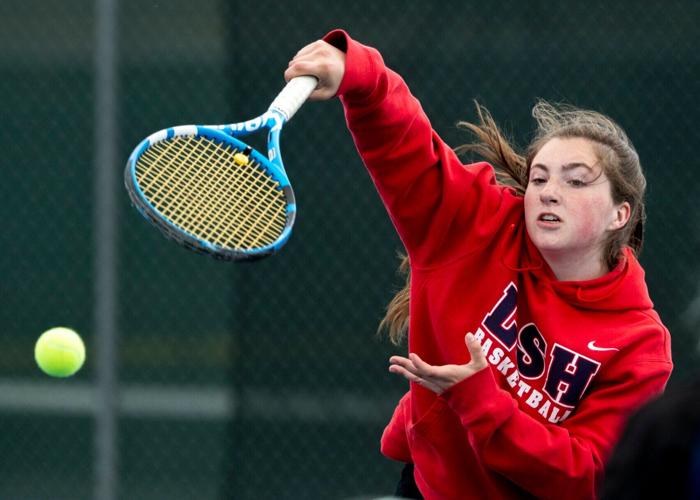 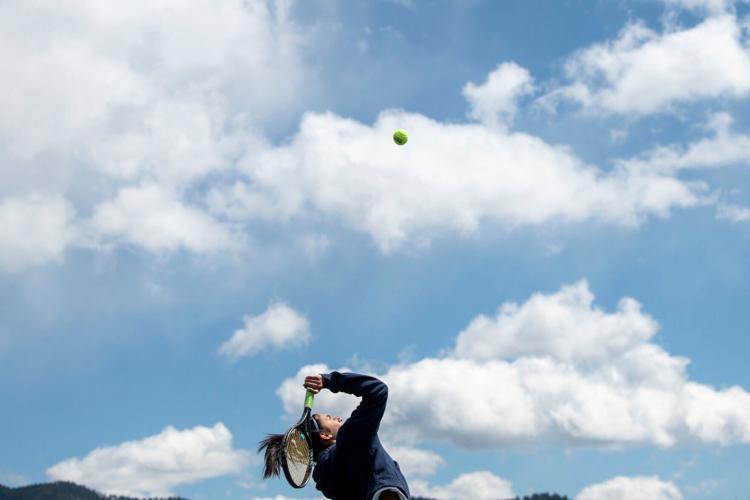 Loyola Sacred Heart’s Gio Horner puts up a serve during a doubles tennis match at Fort Missoula on Friday.

MISSOULA — For Ava Bellamah, the thought of repeating as a State B-C girls doubles champion for Missoula Loyola comes secondary to the sheer enjoyment playing on the same team with her best friend.

Call it teen perspective at its rarest — and best in the arena of high school athletics.

"It's more just like I'm thrilled to be out there with Gio rather than like thrilled to be winning everything," Bellamah said of her partner, Gio Horner, who has helped her forge a perfect record heading into the final day of divisionals Saturday at Fort Missoula.

"It's more about the pride I have in having her as my partner and the joy I get when I'm on the court playing with my best friend. I feel like I'm out there just to have fun with Gio rather than just out there to win. But it's really nice we're winning, too."

Nice, and not surprising, even for a pair of sophomores. Bellamah teamed with cousin Grace Daniel to win a state doubles crown last spring, while Horner advanced to the state championship match in singles as a freshman.

Still, doubles is a specialty conducive to upsets. Even brief lapses in focus can cost a team dearly.

Not only have Horner and Bellamah avoided the big lapse, they've managed to stay undefeated despite the fact they've been tested by Class A and even some Class AA competition.

They'll take their momentum into divisional finals Saturday and then to Bozeman for the 2022 state tournament next week. It will be a new experience for two girls that have been best friends since the fifth grade.

They'll likely make a trip to the local tennis pro shop to increase the tension in their racket strings in preparation for playing at 5,000 feet. And beyond their smooth, trusty strokes, their ability to stick together through tough situations makes them a favorite to win state and finish with an unblemished record.

"We're really good at keeping each other positive and level-headed through tournaments," said Horner, who is also a varsity basketball player for the Breakers. "Ava is really good at hitting really hard balls down the line, so she ends points quickly for us.

"But we work really well together and understand each other. It just kind of clicks with us."

Bellamah and Horner cruised in their divisional doubles debut Friday afternoon at Fort Missoula. The were pitted against Anaconda's Farahbeth Barrington and Samantha Staley — who themselves have a win over a Class A team from Dillon back in April — and the Loyola tandem swept into divisional finals with a 6-0, 6-0 win.

Not even cold, double-fault-inducing winds could throw Horner and Bellamah off their game.

"The slower pace can definitely be hard for us to get in a groove and stuff," Horner said, alluding to the fact most of the B-C opponents that she and Bellamah face don't hit as hard or with as much topspin as they do. "But once we figure out our opponents, it goes easy for us."

Horner and Bellamah will see much tougher competition at state. There will likely be more than one occasion when the team is tested in a close, tense set. Bellamah believes they're ready.

"Me and Gio are both really mentally strong when it comes to tennis because we've been playing for so long," said Bellamah, who is also a volleyball standout and has traveled to USTA tennis events with Horner since both were in grade school. "When we're out on the court, we don't really struggle much with (slumps), and if we do it's really nice to have an outlet of your best friend guiding you through it.

"We've been playing together so long that we know how to come out of holes when we get in them, so it's really easy when I have her as a partner out there."

Loyola veteran coach Patti Danforth calls Bellamah and Horner "a delight" to coach. And she can vouch for their evolution working together this spring.

"I haven't seen two kids play better in doubles," Danforth said. "They're learning to play as a team. For a while they were playing singles with obstacles.

"Now they're starting to play doubles and pulling it together. I like that they're positive and help each other. They pull each other up and keep each other going. They're a true team. Their focus has been phenomenal and it's what has gotten them this far."

Limping after every point, Big Sky's Brooke Williams pushed on in her bid to beat her Sentinel rival. Her reward was the biggest victory of her high school career.

For all she has accomplished on the basketball floor, Bailee Sayler's tennis story might be even more intriguing.

Missoula Loyola's Ava Bellamah, left, and Gio Horner congratulate one another during their Class B-C divisional semifinal doubles match on Friday at Fort Missoula. The duo stayed undefeated with a 6,0, 6-0 win over Anaconda's Farahbeth Barrington and Samantha Staley.

Loyola Sacred Heart’s Gio Horner puts up a serve during a doubles tennis match at Fort Missoula on Friday.