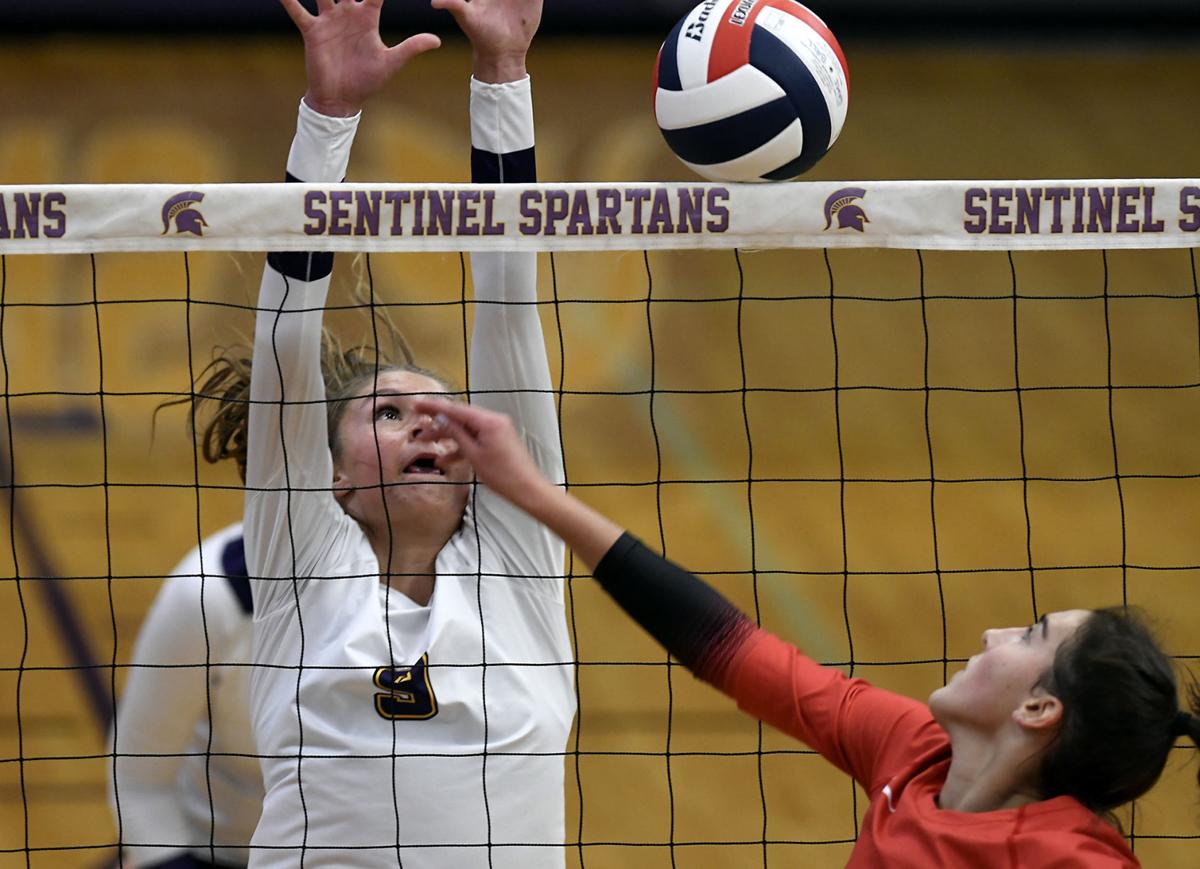 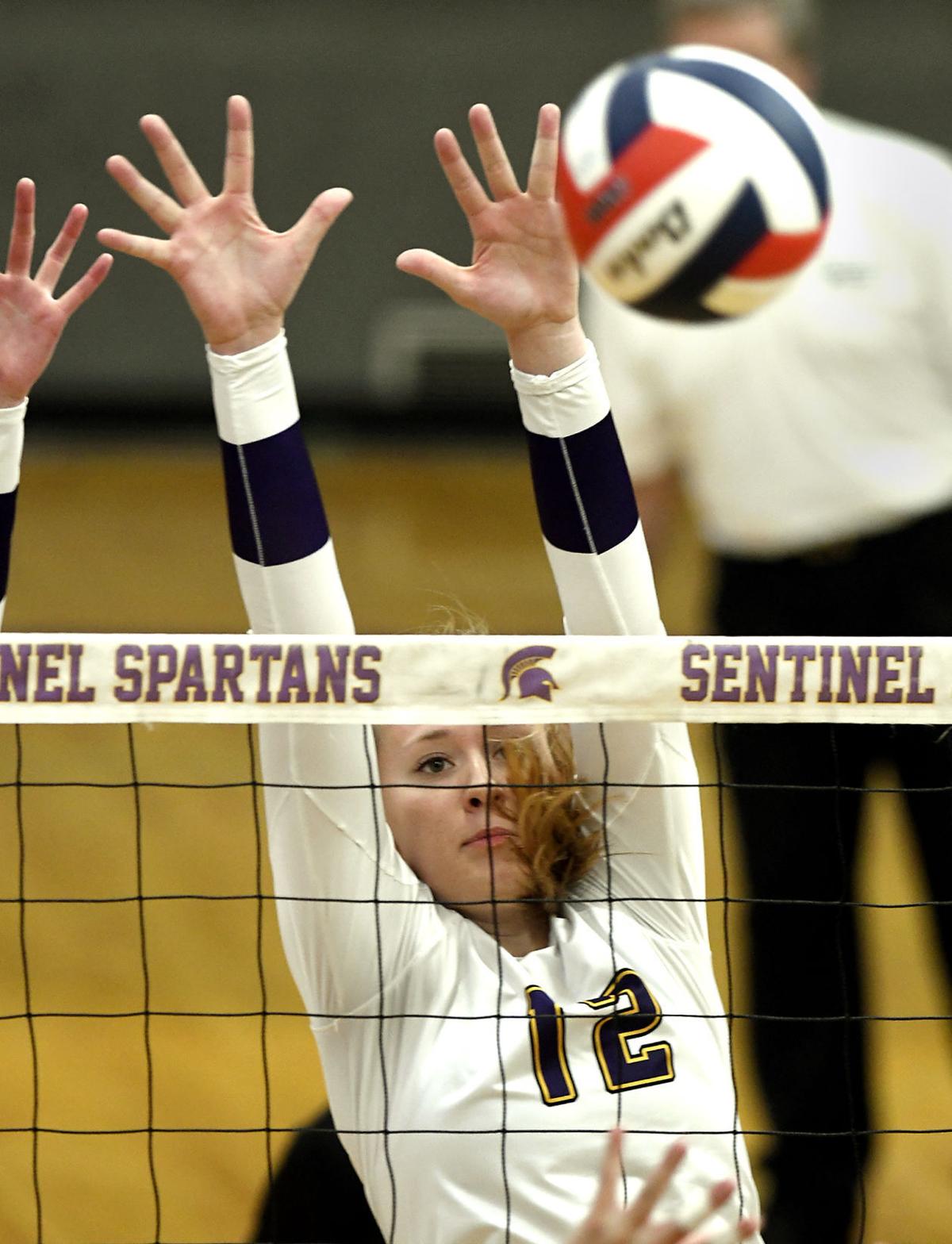 Missoula Sentinel's Quincy Frohlich blocks a shot from Missoula Hellgate during the Spartans' sweep of the Knights on Tuesday at Sentinel.

MISSOULA — With three straight wins under its belt, plus an offensive attack that is starting to hit its stride, the Missoula Sentinel volleyball team looked dominant against rival Missoula Hellgate Tuesday night.

Spartans senior outside hitter Kodi Fraser, with a combination of hard-hit kills, swipes at opposing blockers and finesse tips, sparkled Tuesday, accounting for a team-high 11 kills on 23 tries with a pair of errors. She also had two blocks. Her teammate Quincy Frohlich wasn't far behind with nine terminations on an efficient 13 attempts as she also had two errors.

Just about each time the Knights got a groove going, Fraser had an answer, such as early in the second set. The Knights had a nice rhythm of consistent play, keeping the Spartans from clean hitting lanes and generating their own offense.

With the set close at 7-6 in favor of Sentinel, Fraser roped off a rocket to spark a 3-0 burst that put Sentinel up 10-6. Hellgate responded and traded points until Fraser again stopped the groove with an off-balance kill from the left side, just skirting by the net antenna to put Sentinel up 14-8. Sentinel kept the distance from there in what ended as the closest set of the evening.

Eight Spartans netted kills in the win, putting the pressure off their senior outside attacker Fraser, which is exactly the way head coach Kasey Arceniega wants her squad to be playing.

"It's great because no matter where the set is, you trust them to get it over and most of the time get a kill," Fraser said of her teammates. "And we trust our back row to make that pass, and even when they don't, we know that the next pass is going to be great and the next hit is going to be a kill."

That is the type of play the Spartans will need when the state tourney — scheduled to start in mid-November in Bozeman at Montana State — rolls around. There is still plenty of season left for the Spartans to get their long list of improvements hashed out before then.

"I think we showed tonight that we have a deep bench and we have girls who can come off bench and are able to perform," Arceniega said. "That's been the goal, to spread around the offense as much as we can. When we are playing big, tall teams just splitting that block is really important — that is one thing we have been working on since the beginning of the season. They did it pretty well tonight. There is always room for improvement.

" ... Even though we won, we just got done making a list of what we did well and what we need to improve upon," she added, noting the Spartans are eyeing improvements as the season unfolds.

For Hellgate, Camille Sherrill led the way on offense with 12 of her team's 20 kills while Jordan Freer had 20 assists. Defensively, Sherrill added a pair of blocks and Maggie Vann had 10 digs.

Why are the Cowboys favored to win the divison?

Who's more likely to make the CFB Playoffs: Clemson or Ohio State?

Who's more likely to make the CFB Playoffs: Clemson or Ohio State?

Check out the latest results.

MISSOULA — Corvallis is working through a volleyball transition it hasn’t had to deal with in over 10 years.

There may be some turnover among championship teams this season.

Western 6B/7B volleyball: Florence looks to GRIT its way back to success with veteran group

Missoula Sentinel's Quincy Frohlich blocks a shot from Missoula Hellgate during the Spartans' sweep of the Knights on Tuesday at Sentinel.