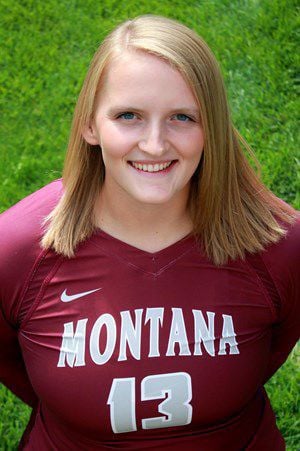 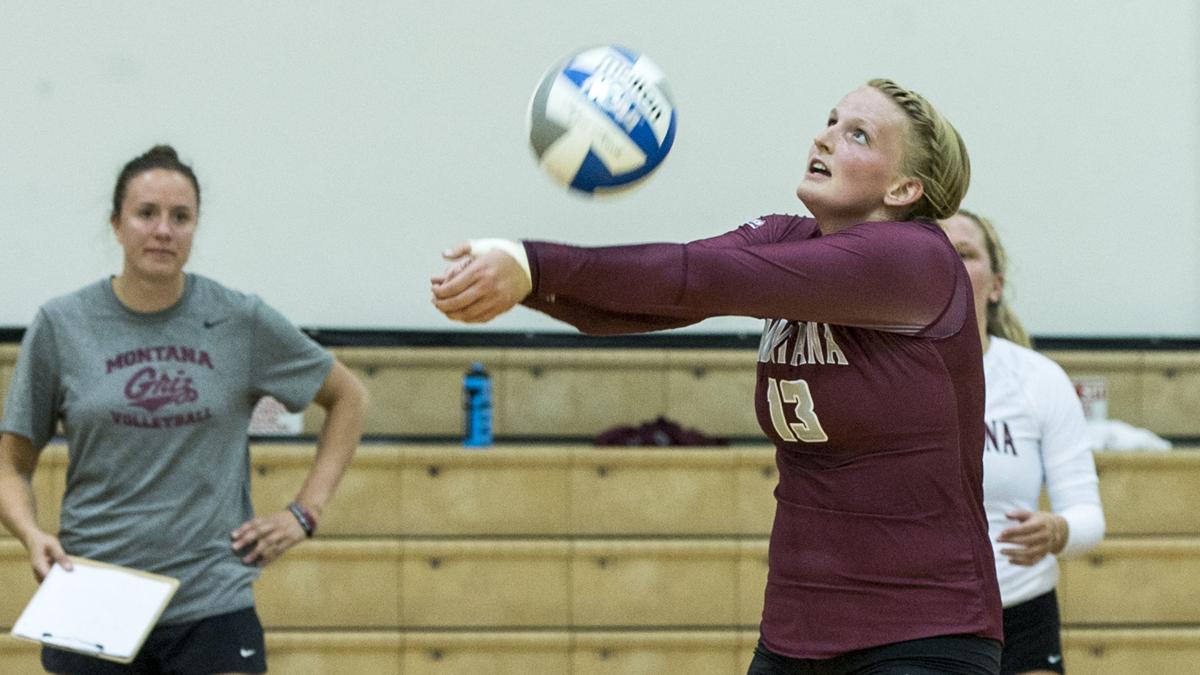 Former Montana volleyball player Brittany Tilleman (13) practices while playing for the Griz from 2017-18. Tilleman, 23, has been hired as Hellgate's varsity volleyball coach.

MISSOULA — Former Montana Grizzly volleyball player Brittany Tilleman is just 23 years old but is bringing over a dozen years of playing experience and about half a decade of coaching experience to Missoula Hellgate as the Knights’ new varsity volleyball head coach.

“It’s kind of funny because I know I am so young to have a head coach position, but I feel very comfortable in my coaching style, and I think that helps me,” said Tilleman, who was recently hired to replace Matty Hancock, who resigned in January after three seasons.

“I know I might not fully understand how to do background stuff of the head coach position, but that’s something I can learn. I know I can coach these girls well. Five, six years of coaching, just taking everything I learned and giving it to them the best I can and using my experience as a player and coach to help them grow.”

Tilleman had been the Hellgate sophomore coach during the 2019 season, her first full year as a high school coach after graduating from Montana in the spring of 2019. She also helped out as an assistant coach on the varsity team during games, keeping stats and providing insight to Hancock about what she saw on the court.

Tilleman also coached in the offseason during her playing days, starting with the Idaho Impact Volleyball Club's U14 team from 2014-16. She’s coached in the Montana Volleyball Academy since transferring to UM in the spring of 2017, working with U14 and U16 teams. This past winter, she provided private lessons and worked at the YMCA instead of coaching with the club team because she's expecting a baby girl in May.

Tilleman used those experiences the past handful of years to start to assemble the style of play she’ll be aiming for with the Knights this coming fall.

“I want their game to become faster,” Tilleman said. “That’s going to come with teaching them the why of the game, the mental side of the game, how to read players and read the defense of the other team and how to pick apart other teams. Definitely speeding up the tempo of our game will help as they learn how to read defenses.”

Tilleman has the on-court experience, starting to play club volleyball in second grade before moving to Coeur d’Alene, Idaho, and suiting up for Lake City High School. The Eugene, Oregon, native grew up in a volleyball family in which her mom coached at the club, high school and college levels, sometimes bringing her along to practices as a kid.

Tilleman played for Montana in the 2017 and 2018 seasons after spending the 2015 and 2016 seasons at North Idaho College. The Griz have been undergoing a turnaround since she arrived on campus in Allison Lawrence’s first year as head coach, and Tilleman sees some similarities with that team and the Knights team she’s taking over, which won just one conference game last season.

“I know it’s going to be a challenge trying to get this team to function together as a team, but I think it’ll be an experience,” said Tilleman, who is formerly Brittany Gay and is married to ex-Montana football player Reggie Tilleman. “Knowing the experience I had at UM, there’s similarities with how the girls act to one another, and I know we can start turning this program around.”

Former Montana volleyball player Brittany Tilleman (13) practices while playing for the Griz from 2017-18. Tilleman, 23, has been hired as Hellgate's varsity volleyball coach.