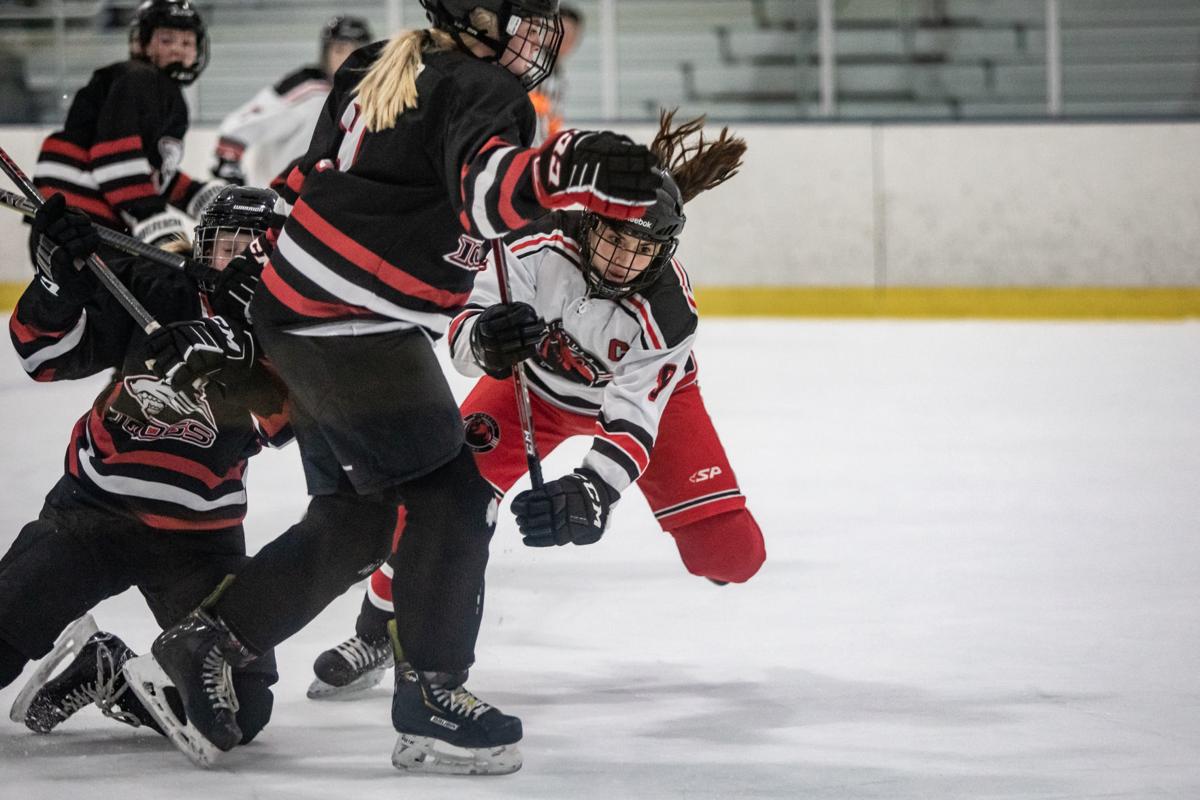 Lady Bruins senior defender Jaden Nielsen hits the ice after a collision with two defenders during the third period of the Lady Bruins' 8-0 victory over the Bozeman Ice Dogs during pool play of the Northern Rockies Classic Friday afternoon at Glacier Ice Rink. 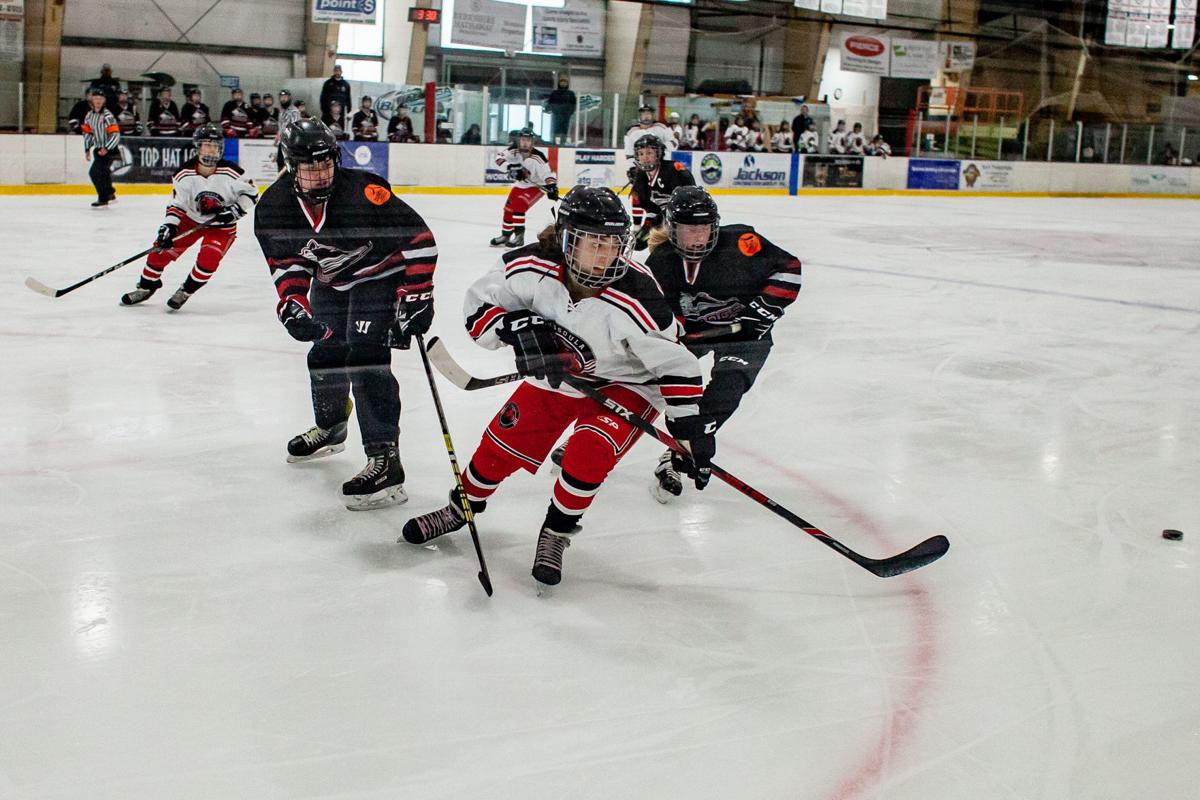 Lady Bruins forward Disa Doherty races toward the puck ahead of two Ice Dogs defenders early in the first period.

Lady Bruins senior defender Jaden Nielsen hits the ice after a collision with two defenders during the third period of the Lady Bruins' 8-0 victory over the Bozeman Ice Dogs during pool play of the Northern Rockies Classic Friday afternoon at Glacier Ice Rink.

Lady Bruins forward Disa Doherty races toward the puck ahead of two Ice Dogs defenders early in the first period.

MISSOULA — Ann Petschauer remembers the regular six-goal losses and the players’ tears that followed in her first season coaching the Missoula Lady Bruins U14 girls hockey team with Grace Hoene in 2012.

It wasn’t a thrilling start for the pair of Minnesota natives who launched the 36-player team because they, as former hockey players, didn’t want to waste a grant that created an inexpensive opportunity for kids to play the sport.

“We like to joke we were duped into it, tricked into it,” Petschauer said with a laugh after her and Hoene’s U19 Lady Bruins opened the Northern Rockies Classic with an 8-0 win over Bozeman on Friday at Glacier Ice Rink, the type of blowout in which the U14 Lady Bruins were used to being on the other side of in 2012.

The five seniors who were on that team and are now on the U19 team have turned the tears of a win-less season into tearing up the competition. They’ve won four consecutive state championships — three at the U19 level — and will try to capture their fifth in a row next month to cap their high school careers.

“It took a lot for us to get here,” said Maddy Gallagher, a senior and alternate captain. “We’ve had some hard games we lost, and we did not take that well. We pushed through that and worked on it and overcame it.”

“Most of it has to do with our coaches because our girls program started from nothing and now it’s grown into something huge,” added senior captain Jaden Nielsen. “Our coaches have kept it growing so that future generations will be a lot better than we were.”

Nielsen, Gallagher and fellow seniors Ellie Jenni, Maddie Heggen and Aubrey McKay didn’t all know each other when they started playing for Petschauer and Hoene in 2012. Some of them knew of each other, and they’ve become much closer friends during their time as teammates, as have others on the team.

The five of them have gone from fifth graders to being months away from graduating and moving on to college, literally growing up together over the past eight years on the ice.

“We’re like sisters,” said Gallagher. “Having each other is a major part of being on the team. We know we can fall back on each other. The rink is a great place to grow up and build a family.”

“We know we can all trust each other,” Nielsen added.

The five seniors have also grown as players. Petschauer has seen McKay, the team’s goalie, grow into being a vocal leader, Nielsen bounce back from a “devastating” knee injury, Jenni be a leader by example, Heggen bring the fun energy to pump up the locker room and Gallagher morph into a “freight train” who’s hard to stop once she gets going.

They’ve all played their role in helping the Lady Bruins win the U14 state title in 2015-16 and the U19 title the past three seasons, all under Petschauer and Hoene. The two coaches moved up to the U19 level with the current group of seniors, although Petschauer spent one season coaching both the U14 and U19 teams.

While the seniors all bring a variety of qualities and attributes, one thing they share is ice time together, helping them to develop the necessary chemistry to excel to this level of success.

“The communication piece of it is huge, especially with hockey and the female game, which a lot of it is more mental,” Petschauer said. “With them having known each other for a long time and having that repertoire, they can keep each other in line, like ‘Hey, we need to do this next time,’ or, ‘Let’s pick this up.’ It’s not mean or malicious. They’re like family.”

Gallagher has already thought about her time with the team winding down and has cried about it being over. Nielsen has tried not to think about it. They both remain focused on helping the team win another state title.

The Lady Bruins are positioned to do just that. They improved to 18-5 with their win Friday, are undefeated in league play and have already locked up the No. 1 seed for the tournament in Bozeman next month.

“The goal is to win state,” Nielsen said. “That’d be a really cool thing to have five state championships.”

“But that’s a lot of pressure,” Gallagher interjected.

Maybe it’s not too much pressure for a group of players and coaches who’ve turned a nonexistent team into a girls hockey dynasty in Missoula.

The Missoula Lady Bruins Hockey kept a clean sheet against the Bozeman Ice Dogs in their pool play game of the Northern Rockies Classic, winni…