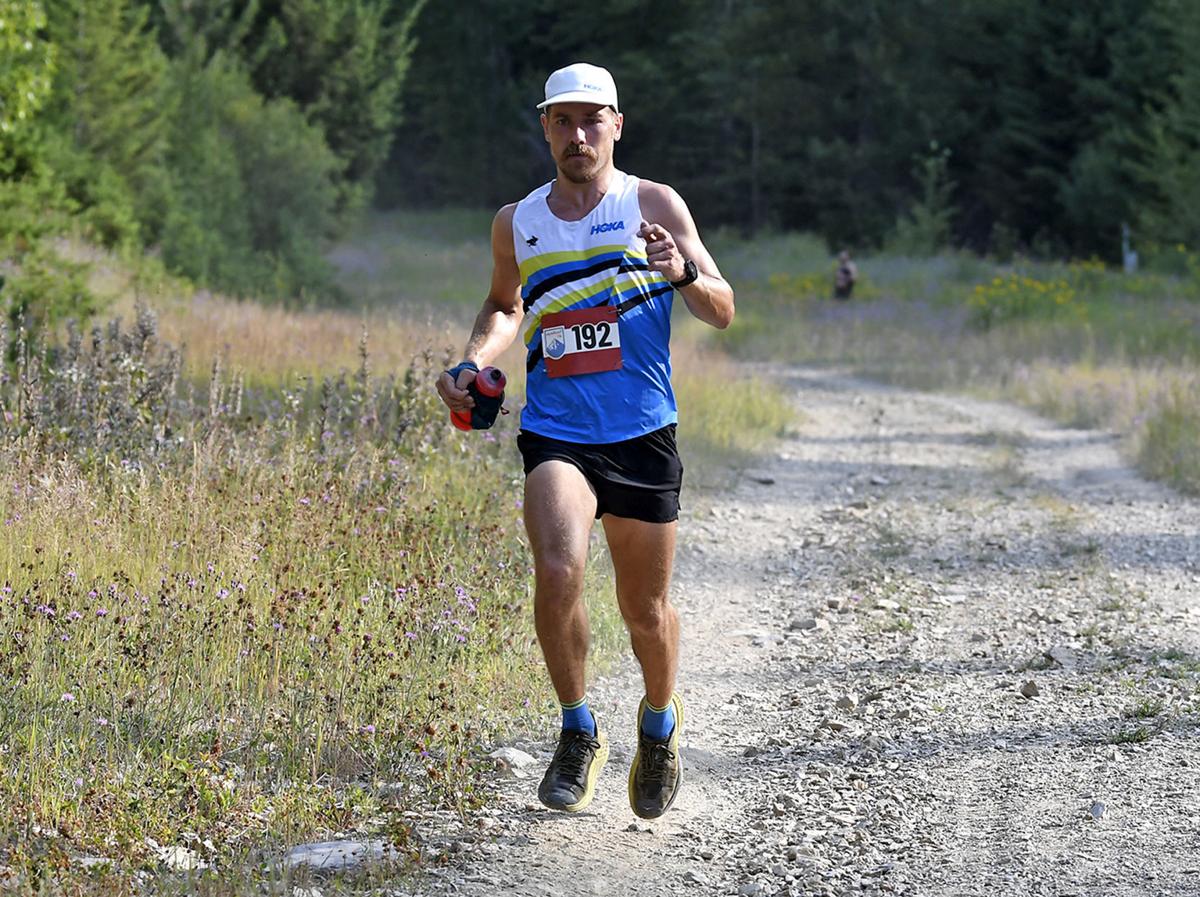 Kris Brown of Missoula nears the finish line as the top overall men's runner at the Snowbowl 15K trail race on Saturday. He finished in 65 minutes, 22 seconds to pull out a come-from-behind victory by just 30 seconds. 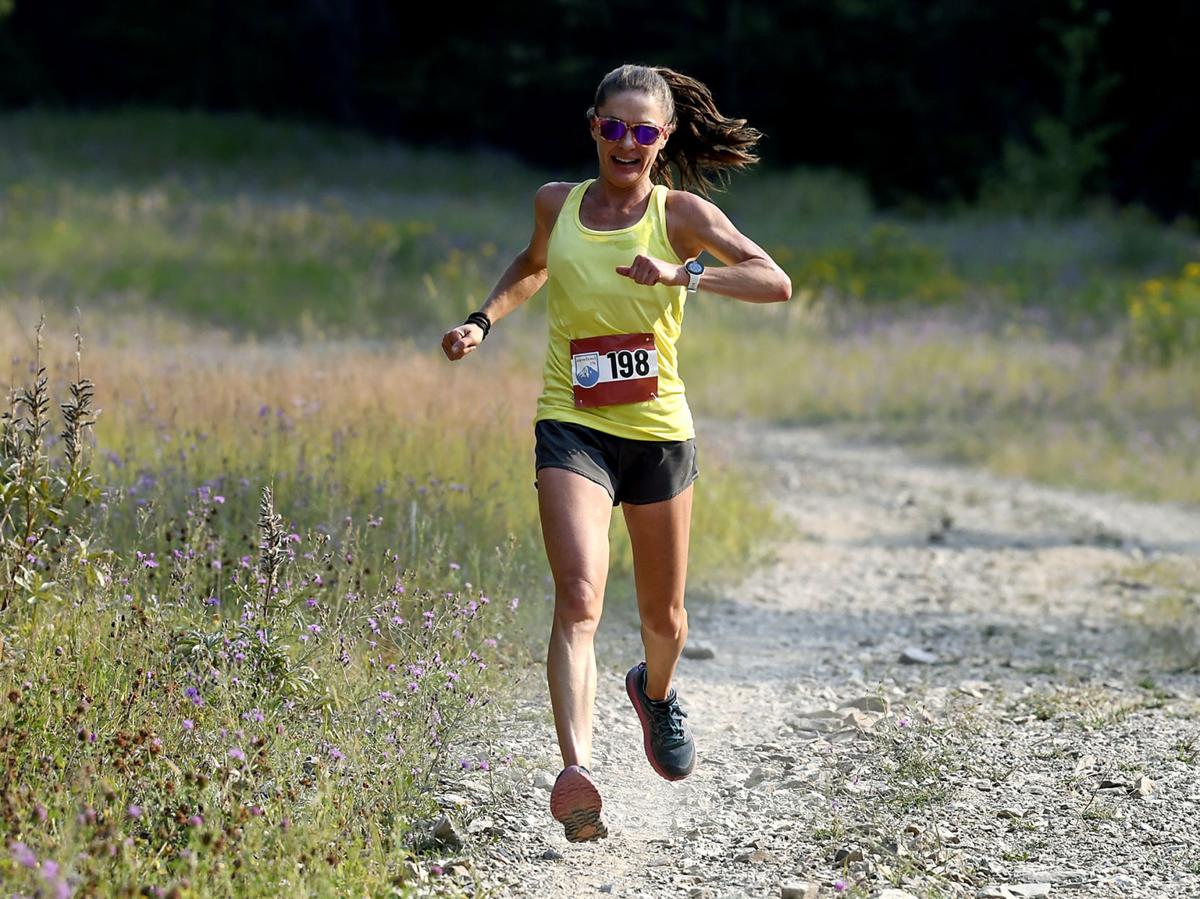 Trisha Drobeck of Missoula nears the finish of the Snowbowl 15K as the top overall women's runner on Saturday. She finished in 77 minutes, 58 seconds to win by nearly 10 minutes. 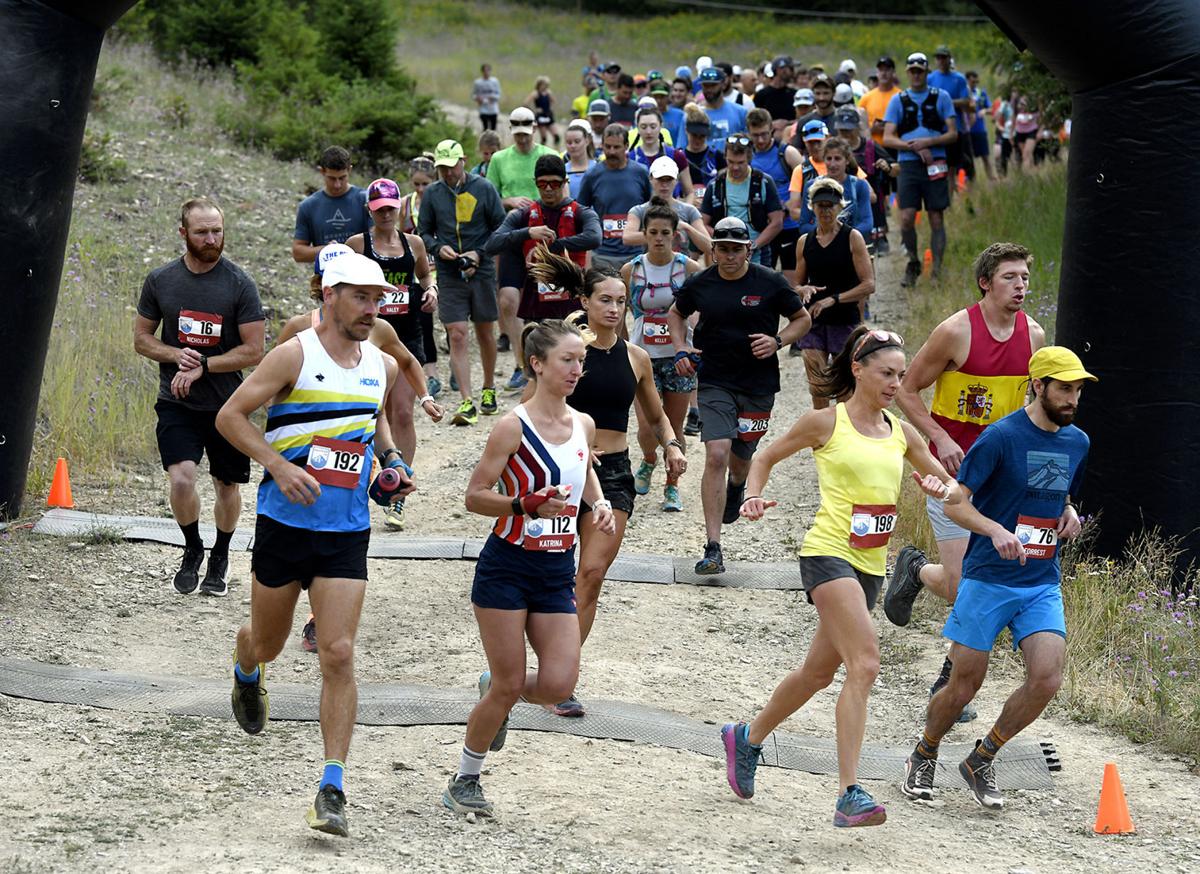 Runners leave the start of the Snowbowl 15K on Saturday.

MISSOULA — Kris Brown felt like he’d have to settle for silver at the Snowbowl 15K on Saturday.

The Missoula transplant had lost sight of the runner in front of him but then came across Missoula ultrarunner Mike Foote on the side of the trail. Those few seconds brightened the outlook for the part-time professional runner in his first-ever race on the course during a sunny morning with blue skies and a cool breeze.

“He cheered me on and said the guy in front of me was still pretty close,” Brown recalled. “That inspired me to give it one last little push.”

Brown, 32, who moved to Missoula from Seattle with his fiancé this past winter because of the trail running opportunities, caught Polson’s Jason Delaney, a Missoula Marathon winner, with about a mile to go. He legged out a sprint to the finish to win in 65 minutes, 22 seconds and top Delaney by 30 seconds.

Right behind was Missoula’s Will Dauenhauer, a Hellgate grad and current Montana Grizzly, in 66:41 and Missoula’s Andy Drobeck, who holds the world record for fastest mile in a full firefighting suit, in 67:07. The next closest finisher was over 4 minutes back on the 9.3-mile course that climbed 2,150 feet over the first 4.65 miles before descending back to the starting line.

“It’s about as hard of a course as you could have, straight up and straight down,” Brown said. “I was a little insecure early because those guys went out pretty hard. I don’t know everybody yet, so if I don’t know who someone is, I could probably beat them. Little did I know that the guys who were running in front of me and with me had serious, serious credentials.”

Brown, who’s sponsored by shoe company HOKA and apparel company rabbit, had just signed up for the race Friday because his fiancé was competing and he had nothing else to do. The former Division III runner at Claremont McKenna College felt it ended up being a good tune-up for his next race, a 101K in Europe at the Courmayeur Champex Chamonix on Aug. 27

“Being halfway through the race and feeling like it wasn’t going well and being able to turn it around, that’s always a good feeling,” he said. “I’m pretty stoked about that.”

Trisha Drobeck pushed herself to keep pace with the top several male runners as she climbed the hill in the first half of the race. She then tried to race past them on the downhill portion.

That was the strategy that the road runner who’s won the Missoula Marathon four times since 2010 decided to employ during a rare trail race, her first-ever time at the Snowbowl 15K. It worked well enough for her to beat her female competitors by over 10 minutes.

“Ignorance is bliss sometimes with trail racing for me,” she said.

Drobeck, 41, who moved from Portland to Missoula for college over 20 years ago because of the skiing opportunities at places like Snowbowl, crossed the finish line in 77 minutes, 58 seconds. She was followed by Hamilton’s Megan Auch in 87:26 and Missoula’s Katrina Miller in 89:16.

Her time was the eighth best regardless of gender this year and would’ve placed her in the top four among female finishers each year from 2015-19.

“I don’t think my time was anything spectacular compared to winners from past years, but it’s always fun to win,” she said. “Who doesn’t like winning? More importantly, it was fun for me to do something with my husband.”

Drobeck signed up on Wednesday because her husband was competing. She hopes the event marks the return of local, in-person races on a regular basis after many races went virtual during the pandemic.

“I kind of got out of the habit of racing with COVID and everything,” she said, “so it’s great to be up here and have racing back.”

After it was held virtually last year, the Snow Joke Half Marathon makes a return to in-person racing in 2022.

Missoula's Adam Peterman took home another win in an ultramarathon, winning the JFK 50 Mile this past weekend in Boonsboro, Maryland.

MLB lockout: What you need to know

Kris Brown of Missoula nears the finish line as the top overall men's runner at the Snowbowl 15K trail race on Saturday. He finished in 65 minutes, 22 seconds to pull out a come-from-behind victory by just 30 seconds.

Trisha Drobeck of Missoula nears the finish of the Snowbowl 15K as the top overall women's runner on Saturday. She finished in 77 minutes, 58 seconds to win by nearly 10 minutes.

Runners leave the start of the Snowbowl 15K on Saturday.