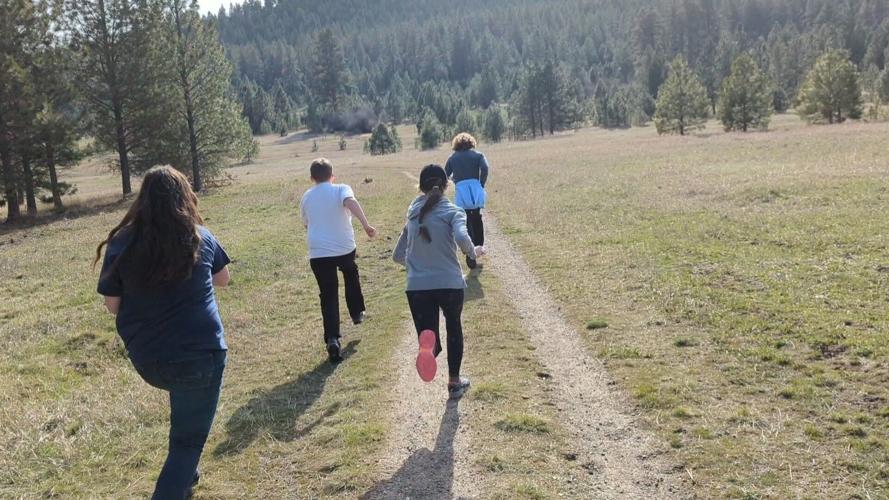 The Grizzly Orienteering Club has members of all ages competing, and is playing host to a major event June 4-6 in Missoula. 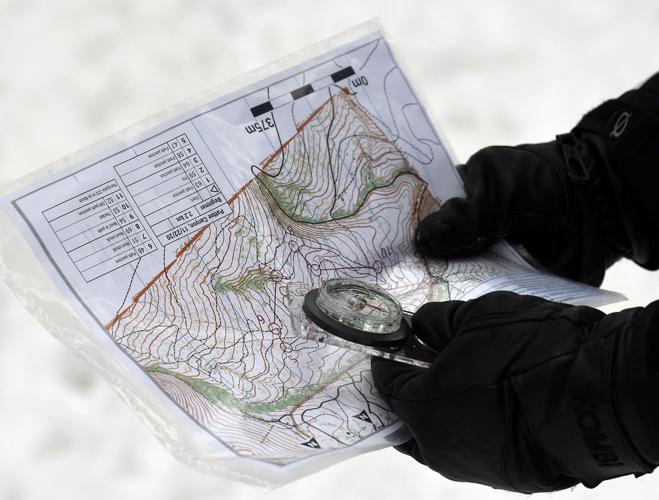 A map and compass are used in orienteering instead of electronic devices and phones with GPS signals and digital maps. Racers competed in a November, 2020, event braving cold and snowy conditions.

MISSOULA — When Boris Granovskiy and his wife Allison Brown moved back to Missoula in 2020, they found a place they hoped their growing-yet-niche sport could thrive.

Lockdowns caused by the pandemic forced major events and sports to take a break as people sought the outdoors for respite, giving the Granovskiy and Brown a solid foundation ahead of one of the first events they held in November 2020 when the their Grizzly Orienteering Club started.

A few years later, the growth has steadied, with a consistent 30 or so members who compete and help put on events and after-school programs for kids to get involved with the sport.

"Missoula has the right demographics and the right population for this kind of sport to grow," Granovskiy said during a Wednesday phone interview. "People here love getting outside and love exploring their surroundings.

"We were basically getting started in the height of the pandemic. So, a sport where you go out into nature and literally choose your own path, I think that had a lot of traction for people. ... I think we really lucked out, so we were able to see a lot of growth early on."

Orienteering's goal is simple on paper: competitors find their way through specific checkpoints as fast as possible with just a map and a compass to guide their way. The challenge: no trails — usually — and competitors decide the best possible route on the fly while running full speed, only getting the checkpoint locations just before sprinting off to find their way through courses that vary from event to event.

There lies the skill. Athletes need to be able to read and navigate while sprinting as fast they can over sometimes rough and wild terrain. Almost like trail running, minus the trail and the knowledge of the course beforehand.

Granovskiy grew up route finding in Russia. He learned the tricks of the sport from his dad when he was 9, continued on to racing as an adult for the US at the worldwide level, and founded Grizzly Orienteering with Brown after they moved to Missoula — Brown's hometown — from Washington, D.C. The two have hosted numerous events in Missoula over the past few years, with one of the biggest they have organized happening this weekend.

Some notable orienteering athletes from the U.S. Orienteering team will compete in Missoula on Saturday, Sunday and Monday as part of a week-long Pacific Northwest Orienteering Festival in conjunction with Spokane- and Seattle-based clubs. The rest of the event will take place around Spokane after the three races this weekend around the Missoula area.

"The fact that it is a whole week, I think, it is attracting people from all over the country who like this possibility to basically orienteer every day for a week," Granovskiy said.

Those athletes, from various states and Canadian provinces, will compete with their sights set on the World Orienteering Championships in Denmark later in June and the World Games — which houses the sport because it hasn't been accepted into the Olympic Games yet — in Alabama in July.

Saturday will be a mid-distance event in the Lubrecht Forest, Sunday will be in the same place but a longer route and Monday will be more unique for the state-side races, an urban race taking place on the University of Montana campus.

Urban races are a fixture in Europe, where the sport is more popular. Races are commonly held around medieval villages or town centers with small passageways, castles and less cars to worry about.

"It's three days of orienteering with really different characteristics and feel to it," Granovskiy said. " ... This is really the first time we get to show off orienteering in Montana to the rest of the country. We have people from 17 states and four provinces coming out so it will be like this national and international introduction to orienteering. I am thrilled about that and want to show off what we have here and the natural beauty in the best possible way."

Anyone interested in competing this weekend or next week may sign up at the club's website Grizzlyorienteering.org. Beginners are welcome, with courses designed around different levels of experience offered.

Adam Peterman won the Western States 100 in his 100-mile debut, as his meteoric rise through ultra running continues.

'It's a Missoula vibe:' Missoula Marathon set for first in-person running since 2019

The Missoula Marathon has been a virtual race the past two years. That trend ends this weekend as the Garden City summer tradition makes its return to in-person racing.

Edwards, who has worked her way back from an injury, took the top women's spot while Bates, a Gonzaga runner who will run in Sunday's half marathon, took the overall and men's spot at the Tony Banovich 5K Saturday morning.

Dollie Kelly and family to walk Missoula Half Marathon in honor of late husband, daughter

Dollie Kelly and members of her family will walk this weekend's Missoula Half Marathon in honor of Kelly's late husband, Con Kelly, and daughter, Laurie Johnson, who passed away within the past month.

Two youth gymnasts from Missoula have historic outing at nationals

Missoula will be represented in a grueling ocean race that starts in Washington and ends in Alaska.

U.S. swimmer rescued by coach after fainting at world championships

The Grizzly Orienteering Club has members of all ages competing, and is playing host to a major event June 4-6 in Missoula.

A map and compass are used in orienteering instead of electronic devices and phones with GPS signals and digital maps. Racers competed in a November, 2020, event braving cold and snowy conditions.