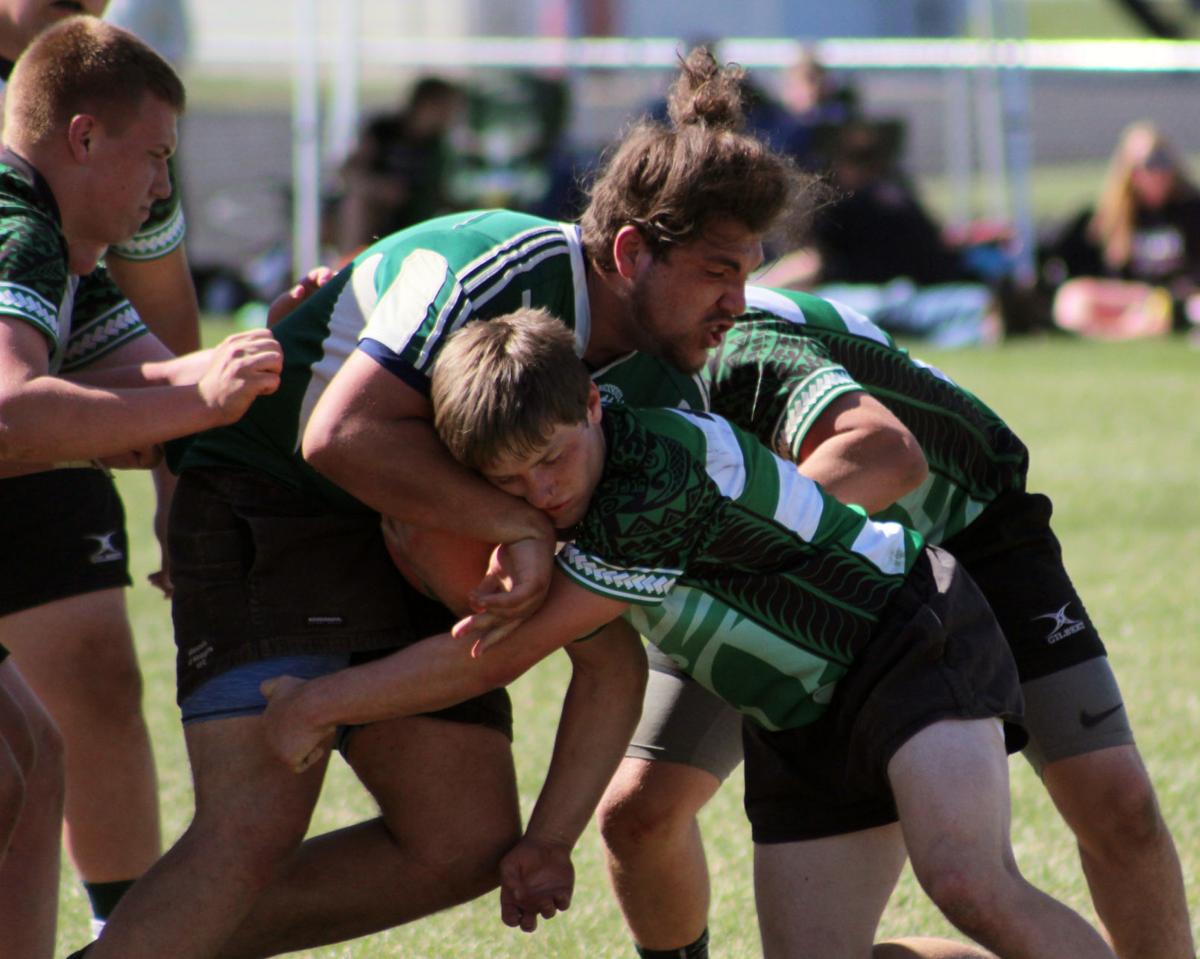 CORVALLIS — For the Missoula Mud Dogs boys rugby team, their 2019 high school state championship victory in Corvallis can and should be remembered for their dogged determination to come back from a 14-0 first-half deficit, winning, 3 tries to 2. That will always be the case in Eli Christianson's mind.

"We're aggressive, we love to play hard and it really pays off when we're out here working out butts off the whole game," said Christianson, a junior halfback from Florence who suits up for the Missoula squad and lifted the Mud Dogs with a game-winning try late in Saturday's title match.

But for the second-place Bitterroot Warriors, it will be hard to forget their frustration brought on by a late-game penalty call that wiped out a try from one of their standout senior captains, Michael Golden.

About two minutes before Christianson's try (similar to a touchdown in football) gave Missoula the lead for good, Golden appeared to have touched down the rugby ball for a try of his own. With less than five minutes remaining, and the Warriors already leading 14-12, Golden's breakthrough would have given his squad a two-try lead and most likely iced the game.

But before the Warriors could celebrate, the entire scoring play had been waved off. The call came after Golden's scoop of the loose ball, it came after his long and uncontested run to the end zone that followed and it came after the Warriors had already tacked on the conversion kick.

The law of advantage, similar to an advantage foul in soccer where a team with the ball is allowed to play on if the infraction against them doesn't force a stoppage in play, was awarded from an earlier Missoula offensive phase. To the casual observer it appeared that the advantage period was likely over before Golden's scoop and score.

It certainly seemed that way in the eyes of the Bitterroot cohorts.

"I don't know what the penalty was, and it's fine if they call a penalty, but calling it back after that... That's opposite of the law of advantage," Bitterroot coach Boyd Kanenwisher said. "That's upsetting, it's frustrating. (With that said), I don't think you lose any game on one play, (but) when you're towards the end and it's like that, you're right, it's a bit like the Rams..."

That would be the St. Louis Rams, and the controversial no-call on an apparent pass interference penalty in the NFL's NFC Championship Game earlier this year. The infraction wasn't ruled, meaning the New Orleans Saints weren't awarded a first down and a better opportunity to win.

The call on Saturday was certainly different. It was on a different stage and it may very well have been the correct call. But it definitely felt unusual and it absolutely took the Warriors' apparent scoring try off the scorecard.

Still, the Bitterroot boys had a 14-12 lead and the second-half clock continued to wind down.

"...You can't lose on one play, but you're in that position because of a series of plays," Kanenwisher said. "Our biggest drawback, and it's every rugby team's biggest drawback, is if you get winded and don't move forward on that defensive line. ...That second half the guys just got on their heels and energy-wise couldn't move forward. It was a great game, a hard fought game.

"...For us it was attrition. We told the guys they put all the effort out there, they understand the process, the game, the structure is correct, the athleticism is correct, we just got outlasted in the end."

In fact two of Missoula's three scores came late in each half. With roughly less than a minute remaining in the first half and the Mud Dogs near the goal line, Missoula cut into the Warriors' lead, 14-12 on a try.

"We talked about it all year and our ability to finish," Missoula coach Bill Merrill said. "It seemed like at the end of the periods, our boys really picked it up in the last five minutes. We got down 14-nothing and never stopped believing."

Christianson again had his hand in on the try before the half, as he pitched the ball on somewhat of a misdirection while slanting to the right and throwing back left.

Dayton Evans, of Missoula Big Sky, received the toss and punched it in for the deficit-eating try.

"We were trying to make a trick play when we were in the red zone close to scoring, and we practiced it this week, we got the timing down and we knew to bust that out when we were close to the end zone," Christianson said.

That score closed the gap enough to make Christianson's late-game try — a quick scamper near the end zone after a penalty that caught the Warriors napping just enough — the game winner.

Just before the hotly contested boys' championship, the Bitterroot girls got to celebrate their second straight state championship, a 4-try to 3-try win over Kalispell.

The win was particularly satisfying for Florence senior and Bitterroot captain Tori Foster, who returned from an injury earlier this season.

"I'm super grateful for this. I love the game, I love this sport and it just makes this whole season come together," said Foster, whose preseason bout with bronchitis led to her breaking the cartilage in her ribs. "It was horrible and it hurts to get tackled, and those girls tackle hard.

But this just makes the whole season worth it."

The win for the KOA Wahines, as the Bitterroot girls are known, was also special because a lot of the girls on the team were new to the sport. The team returned just four girls from last year's state title run.

One of those was Haliegh Golden, Michael Golden's younger sister, who had a try in an early Saturday's semifinal game against Helena.

"We figured we needed to get this team together and actually put a lot of time in," Haliegh said. "When we finally got the basics down, we really (elevated our game)."

And it gave the Bitterroot girls the right to raise the first-place trophy again.

The 2020 Missoula Marathon is canceled.