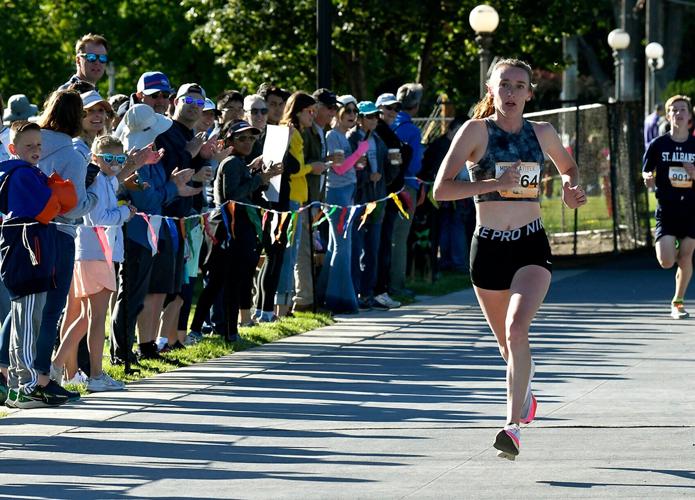 Maddie Edwards finishes first in the women's division of the Tony Banovich Missoula 5K on Saturday. Edwards attended high school at Missoula Big Sky and is now running for the Air Force Academy in Colorado. 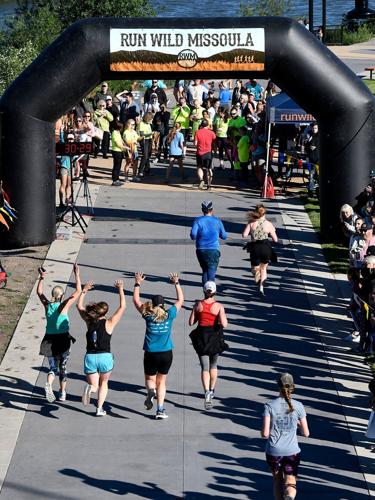 Runners near the finish of the Tony Banovich Missoula 5K in Caras Park on Saturday. 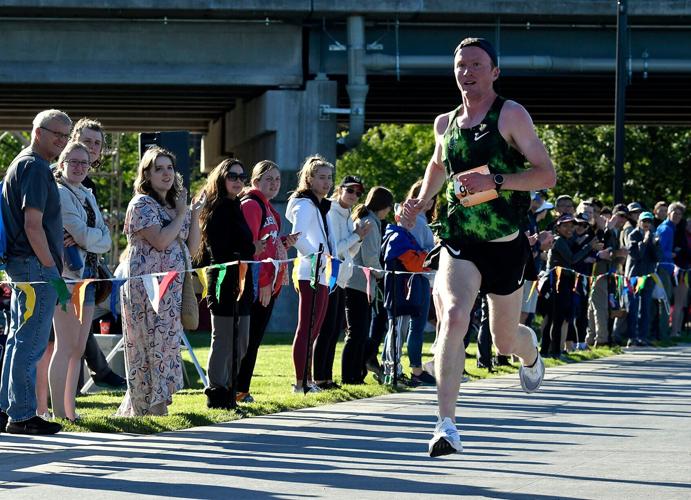 Evan Bates nears the finish of the Tony Banovich Missoula 5K to win the men's division on Saturday.

MISSOULA — Maddie Edwards hasn't quite been up to her normal level of health since her high school running days at Missoula Big Sky.

A senior running for the Air Force Academy in Colorado, she has battled nagging injuries the past few seasons and is currently coming off one that held her back the past year. Now back home for a spell for summer break, she opted to try out the inaugural Tony Banovich 5K — named after the late Run Wild Missoula and Missoula Marathon executive director Tony Banovich, who passed away suddenly in October 2020 — on the eve of the Missoula Marathon.

She didn't expect a great performance, she admitted. She hoped she'd get a feel for where her legs are at, looking ahead to the fall cross country season. But as she began running across the Beartracks Bridge onto the rest of the road course through town, she felt better than expected.

"My legs have been feeling great," she said. "I expected to feel really bad, and then I was running my pace and thought, 'This is easy, but I'm not going to try go to faster.'"

She is sticking to the 5K, keeping her mile work around the 40-mile-per-week range as she works her way back from injury — eventually hoping to get back to the 60 range soon.

The course, which bares a resemblance to the YMCA Riverbank Run course of years past before the event was moved to PlayFair Park, is relatively flat and straightforward.

"I thought it was so fun," Edwards said. "I thought it went by super quick and it was pretty straight shot and I loved it. Running by the river a little bit was great. I love this race and everyone gets so excited about it. I always love doing it."

Edwards took the top women's mark in about 18:20. Evan Bates, a third-year runner at Gonzaga who cheered on Edwards as she ran through the final 20 meters, took the top men's spot at 15:08.09.

He actually knows Edwards because he is dating her sister, fellow former Big Sky runner Makenna Edwards — who is also running at Gonzaga and will run in the half marathon Sunday.

Bates used the 5K as a warm up for the big event: Sunday's half marathon. He has only ran a half marathon before, making the Sunday trek a major moment for the young college runner.

"I really like it," Bates said of the environment around race weekend. "The one half marathon I did was smaller, about a third of this size, so it's really cool to be in a bigger race. ... I feel alright, pretty good so we will see what happens tomorrow."

Finishing behind Bates were Niko Jeftich of Chicago in 15:40.01, Hunter May out of Missoula in 15:45.41 as the first Montana-based runner to cross the finish line and Cody Moore, a running coach at Kalispell Glacier, in fourth in 15:50.02.

Greeting runners at the starting line up on the bridge and down to the finish line at Caras Park throughout the morning were hoards or spectators, dogs and even the Missoula PaddleHeads mascot Paxton, who aided in handing out medals and snapping a few pictures too.

Missoula Marathon weekend continues with the half and full marathons Sunday morning, starting bright and early at 6 a.m.

Who has scored the most World Cup goals of all time?

Maddie Edwards finishes first in the women's division of the Tony Banovich Missoula 5K on Saturday. Edwards attended high school at Missoula Big Sky and is now running for the Air Force Academy in Colorado.

Runners near the finish of the Tony Banovich Missoula 5K in Caras Park on Saturday.

Evan Bates nears the finish of the Tony Banovich Missoula 5K to win the men's division on Saturday.