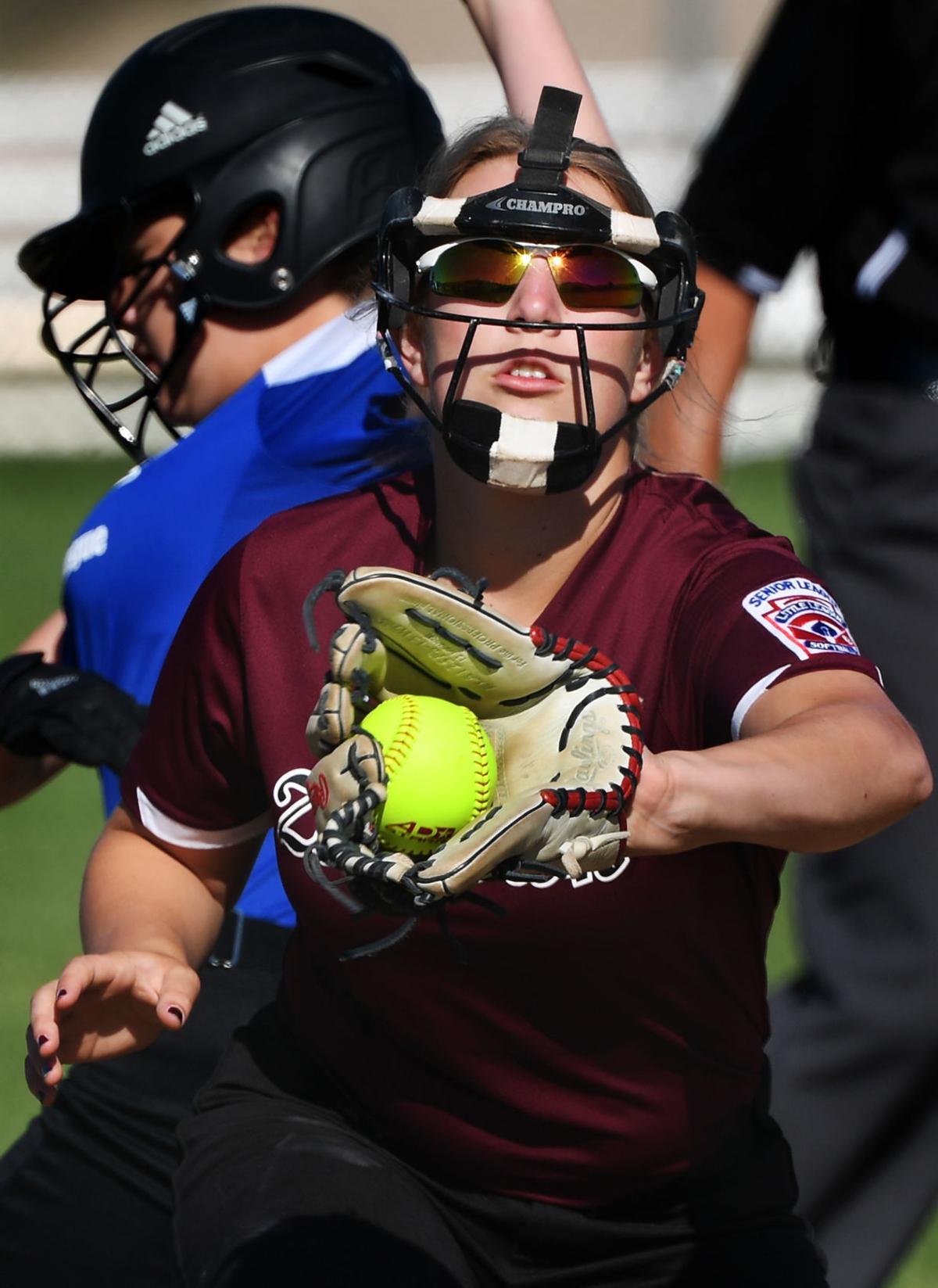 ZooTown's Juna Ashby catches a ball at third base as a Washington runner sneaks to safety behind her during the Senior League Softball West Regional at the Dale Clawson Complex on Saturday. ZooTown beat Washington 21-1 in four innings. 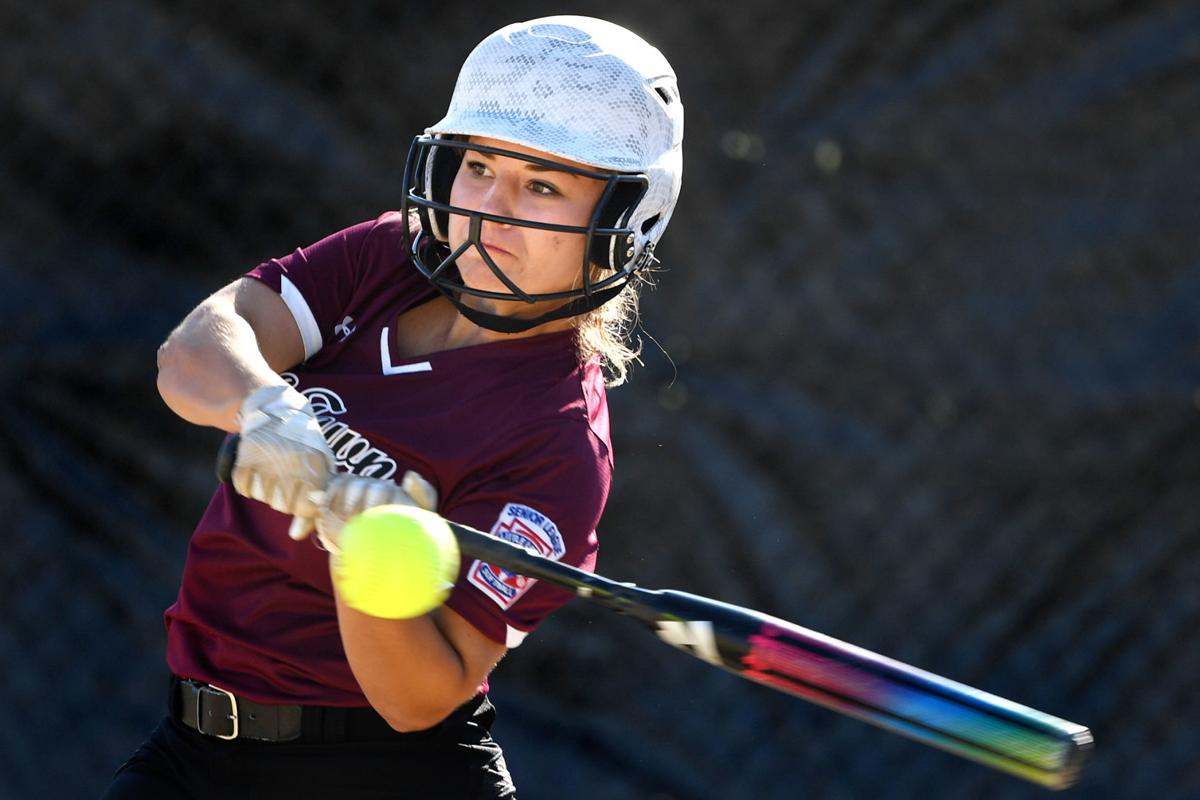 Jadyn Gagner swings at a pitch in the first inning. ZooTown went on to lose to Southern California 11-0 in five innings later in the day.

ZooTown's Juna Ashby catches a ball at third base as a Washington runner sneaks to safety behind her during the Senior League Softball West Regional at the Dale Clawson Complex on Saturday. ZooTown beat Washington 21-1 in four innings.

Jadyn Gagner swings at a pitch in the first inning. ZooTown went on to lose to Southern California 11-0 in five innings later in the day.

The incoming eighth grader at Hellgate Middle School crushed a grand slam in her first at-bat Saturday as ZooTown’s designated hitter, a position the team opted not to use Friday before manager Dennis Staves and coaches Tim Gray and Taylor Brinkman changed their mind.

Hood’s bomb to left-center field jump-started a stagnant offense in a 21-1 win over Washington. The victory was ZooTown’s second of the tournament, and combined with results of other games, it helped the team clinch a berth into the knockout stage despite a loss later in the day.

“I was going, ‘Yeah,’” Staves chimed in with an exclamation.

“To our credit, we agreed with you,” Gray added. “We didn’t argue too loudly. But yeah, you were looking pretty bright at that point.”

Hood’s homer was part of a 14-run first inning and an 11-hit game in which ZooTown found its offense after a first day that was leaner than the coaching staff had hoped to see. Hood, one of only two middle schoolers on the 16-and-under team, drove in four runners, as did catcher Abby Faulhaber.

The early excitement wore off by the end of the day, which concluded with an 11-0 loss to then-undefeated Southern California in four innings. After the team’s postgame meeting in right field, Staves’ final advice to the team was, “Smile, ladies.”

“I think that’s by far the best team here,” Staves said. “I don’t think there’s any question. That pitcher is really good. She’s got a great rise ball. These kids, I don’t think they’ve seen anything like that.”

ZooTown managed just one hit and one walk against Southern California pitcher Ann Buffolino. They struck out 13 times in 17 at-bats while dealing with Buffolino’s rise ball and a fast speed they hadn’t seen at the tournament.

Defensively, ZooTown was done in by an eight-run second inning that put them in a 9-0 hole. Southern California finished the game with 10 hits, drew five walks, and scored three runs on wild pitches and one on an error.

“I do, too,” Staves added. “I was little disappointed how we started off the game because we made some errors that cost us quite a few runs.”

A bright spot for ZooTown was the relief work done by Gagner, a left-handed pitcher. She limited Southern California to two runs on two hits and two walks while striking out five in the final 2 1/3 innings. Against Washington, she walked one and struck out four in two innings.

“Little Jadyn came in and did a pretty good job today,” Staves said. “Obviously, they were up at that point in time, but she came in and really took care of business. It was a really good thing to see. We know now that we have a few more options.”

ZooTown is expecting to get back Charlee Hoover, who missed Saturday’s games for a family wedding after throwing a two-hit complete-game victory Friday against Billings.

“We missed Charlee,” Staves said. “It threw the rotation off. It threw our outfield off. We’ll be a different team with her. There’s no doubt about it. She brings a presence to the field.”

Billings won its first game at the regional after a 0-3 start, posting a 17-2 win over Washington in five innings.

After falling behind 2-0, Billings scored in each of the next three innings and posted an 11-run third inning. Jiejie Rohrer, Viannca Martin, Aubre Childers and Lily Zimmer drove in three runs apiece. Pitcher Peyton Whitehead limited Washington to two hits and five walks in four innings while striking out six.

Billings had found its offense in its first game of the day but couldn’t slow down Nevada’s bats in a 25-13 loss in five innings.

NOTES: Heading into the final day of pool play, the standings are: Hawaii (4-0), Southern California (3-1), ZooTown (2-2), Arizona (2-2), Nevada (2-2), Billings (1-3) and Washington (0-4). … The top six teams qualify for the elimination bracket. … ZooTown has an outside shot of automatically qualifying for the semifinals. It’ll have to win out against Nevada and Arizona, and it’ll need Southern California to lose to both Billings and Nevada since Southern California owns the head-to-head tiebreaker.

Frank Gogola covers Griz football and prep sports for the Missoulian. Follow him on Twitter @FrankGogola or email him at Frank.Gogola@406mtsports.com.