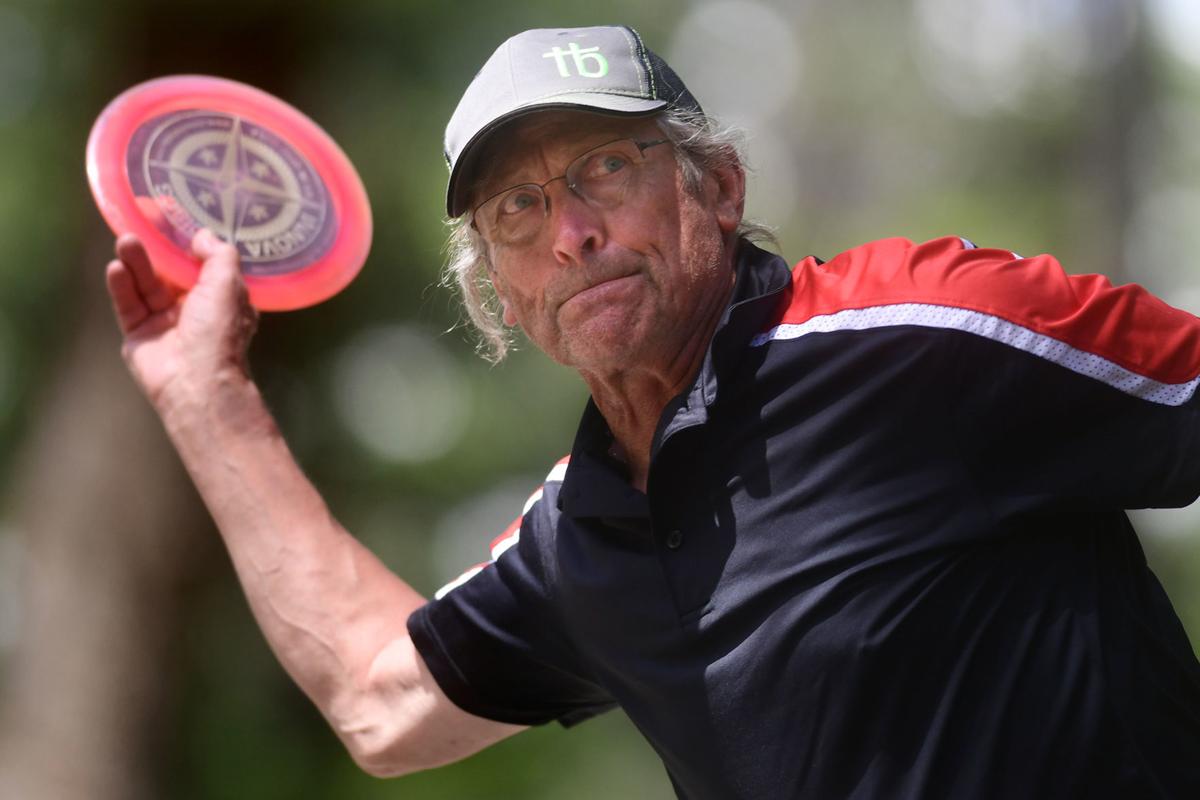 Missoula's Jon Graff winds up for a throw on the 18th hole of the Blue Mountain Disc Golf Course during the 14th annual Zoo Town Open on Saturday afternoon. Graff is the current world champion in the 70-plus age bracket. 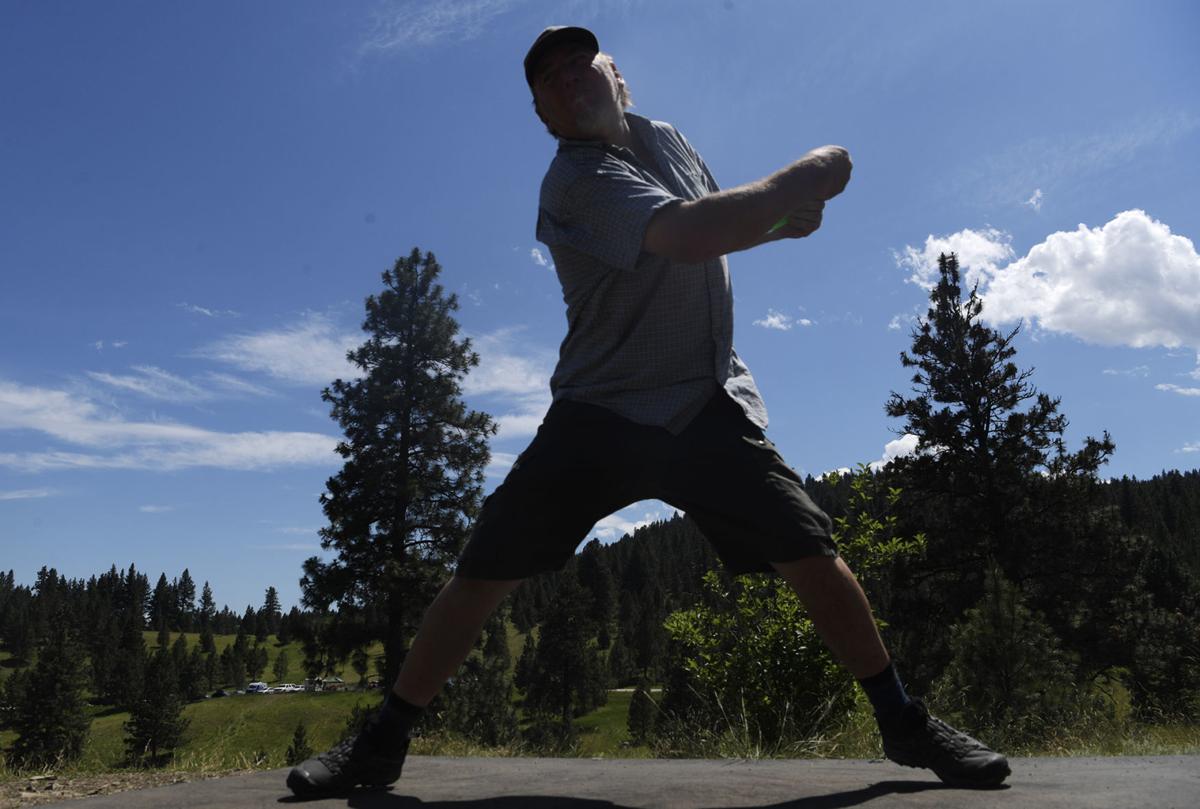 Bozeman's Joe Harr tees off in the middle of the second round. The tournament will continue at Linda Vista Golf Course on Sunday, with the top professional men beginning at 12:40 p.m. and the top pro women teeing off at 1:50 p.m.

Missoula's Jon Graff winds up for a throw on the 18th hole of the Blue Mountain Disc Golf Course during the 14th annual Zoo Town Open on Saturday afternoon. Graff is the current world champion in the 70-plus age bracket.

Bozeman's Joe Harr tees off in the middle of the second round. The tournament will continue at Linda Vista Golf Course on Sunday, with the top professional men beginning at 12:40 p.m. and the top pro women teeing off at 1:50 p.m.

MISSOULA — Missoula resident Jon Graff had never heard of disc golf when his son asked him if he wanted to join in a game with his friends in 1992.

Twenty-seven years later, Graff keeps finding joy in the competition and the outdoors, even as the game continues to be populated by players younger than the 71-year-old. Of course, it’s even more fun when you’re a reigning world champ in the Professional Disc Golf Association.

“There are days when I feel that old,” Graff said with a hearty laugh on Saturday, the first day of the 14th annual Zoo Town Open at Blue Mountain Disc Golf Course in Lolo National Forest. “I’m still able to get through a couple rounds a day and not suffer too much. It’s been good. It keeps me young, I think. I’m out exercising.”

Follow Graff for a few holes and his youthful exuberance shines through, masking the surgeries he had to reattach a rotator cuff and replace a knee and an ankle. From the smile regularly on his face to his sociable nature, his vibrancy is unmistakable.

The competitive spirit that drew Graff into the game doesn’t hinder his attitude on the course. He’s willing to offer advice and encouragement to others, even as he finished the first day tied for fifth in the Pro Masters 50-plus division. And when he messes up a shot, like hitting a tree on hole No. 15 in the first round, he laughed it off and moved on to the next shot.

“It’s a pretty good bunch of guys, and they don’t get crazy about it,” Graff said. “You realize we’re human. We’ve all played together enough that we’re pretty good friends. We joke around and help each other with shot ideas.”

Graff’s journey in the sport has spanned four world championships, capped by a world title in the Pro Masters 70-plus division in August 2018 in Kansas City.

“That’ll be the first and only. I’m sure,” Graff said, followed by a laugh. “It’s pretty cool. It’s kind of the situation of being in the right place at the right time and still being able to play at a somewhat high level at my age. So, it’s kind of cool.”

Graff has found time to play two to four times a week now that he’s retired from a 32-year career as a mailman. He mainly plays in tournaments around Montana but will make an occasional trip to Idaho or Spokane.

When time allows, Graff will play a round with his son, who lives in Portland. He credits his wife for supporting his passion for the game, which includes 32 wins in 127 events.

“My wife is a disc golf widow,” Graff said with a laugh. “We’ve been married for 50 years, so half of that time she’s been waiting for me to get back from tournaments. She encourages me, so that’s good.”

In the women’s Open division, returning Zoo Town Open champion Madison Walker sits atop the leaderboard. The 31-year-old Florida native shot the top two scores, following up her first-round 57 with a second-round 56. Her score of five-over 113 gives her a four-stroke lead against Missoula's Erika Stinchcomb heading into the final round at 1:50 p.m. Sunday at Linda Vista Golf Course.

“It’s brutal,” Walker said of the course. “Coming from Florida, I’m used to sea level and everything being flat. But I love this course. I love the elevation. It’s just trusting your discs.

“I was bogey-free. So that was the good part. It was just really smooth. Not a lot of trouble. And when I did get into trouble, I was able to effectively get it back out into the fairways.”

Idaho native Sarah Hokum, the 2012 women’s world champ who’s ranked fourth in the world, shot a 118 to sit in third place, one stroke behind Stinchcomb.

“This course is one of my favorites because of the combination of elevation change and technicality of the shots,” Hokum said. “This layout requires that you throw so many different lines, which makes it more fun.

“I’m just glad that I put up a decent score. I definitely left a lot out there and threw some pretty errant shots, missed a couple putts. Just got to clean it up a little bit.”

Washington's Nicole Johnson is fourth with a 119, while Texas' Lisa Fajkus is fifth at 124. Reigning world champ Paige Bjerkaas, ranked seventh in the world, ended the opening day in sixth place with a 125, one stroke better than California's Jessica Weese, who's ranked 10th in the world.

“Pretty terrible. Pretty awful,” Bjerkaas, a 22-year-old Kansas native, candidly said of her first round. “I’m in like a millionth place, which sucks because I really practiced hard, played a lot of practice rounds, did a lot of field work, did a lot of putting.

“My driving felt OK. Just wasn’t getting up and down. Kind of had a slow group, so I was pretty antsy. I’m a pretty quick player, and when everyone in the group is slow, it was very hard to focus. Because they were taking long, I was just like, ‘Let’s go,’ and I rushed a few shots.”

In the men’s Open division, Florida's Calvin Heimburg shot the best round of the day, a 47 in the second round, to finish the opening day atop the leaderboard with a 12-under 96.

Colorado's Colten Montgomery put up a pair of 49s to end the day in second with a 10-under 98. Minnesota's Jordan Castro is right behind in third place with a 9-under 99. The 25-year-old Castro had the top first-round score, a 48, his best round at Blue Mountain in his four years competing in the tournament, and he followed that up with a 51.

“I was really happy and satisfied with it,” Castro said of the first round. “I usually shoot in the 55-56 area. My game felt really good. My putting, the stroke was good. The drive stroke was amazing. It felt great. I had a few mental errors. Early release. Other than that, everything was right there.”

Virginia's James Conrad, ranked fifth in the world, sits in fourth with a 101, while Illinois' Brian Earhart is fifth with a 102. There's a three-way tie for sixth at 103.

Frank Gogola covers Griz football and prep sports for the Missoulian. Follow him on Twitter @FrankGogola or email him at Frank.Gogola@406mtsports.com.