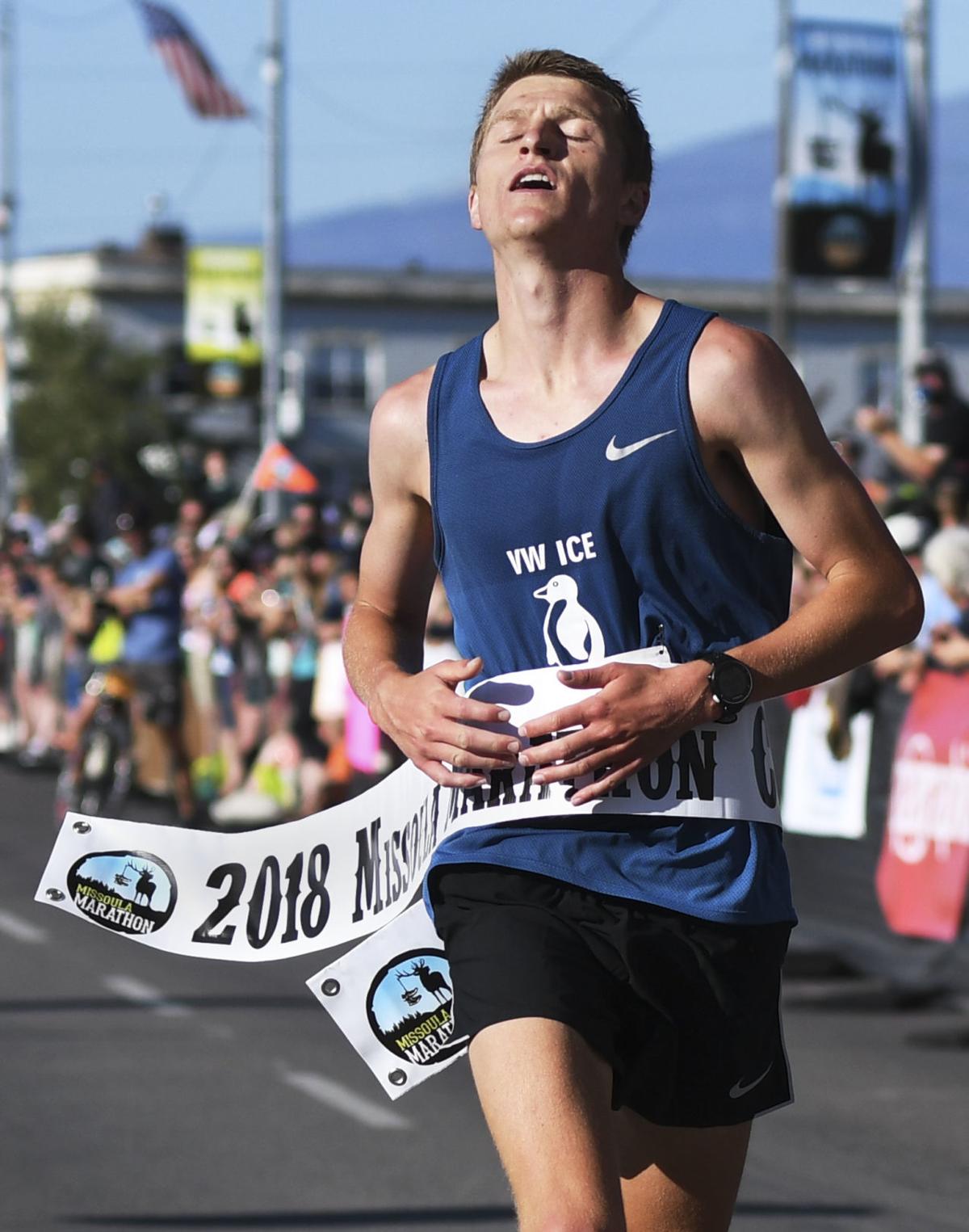 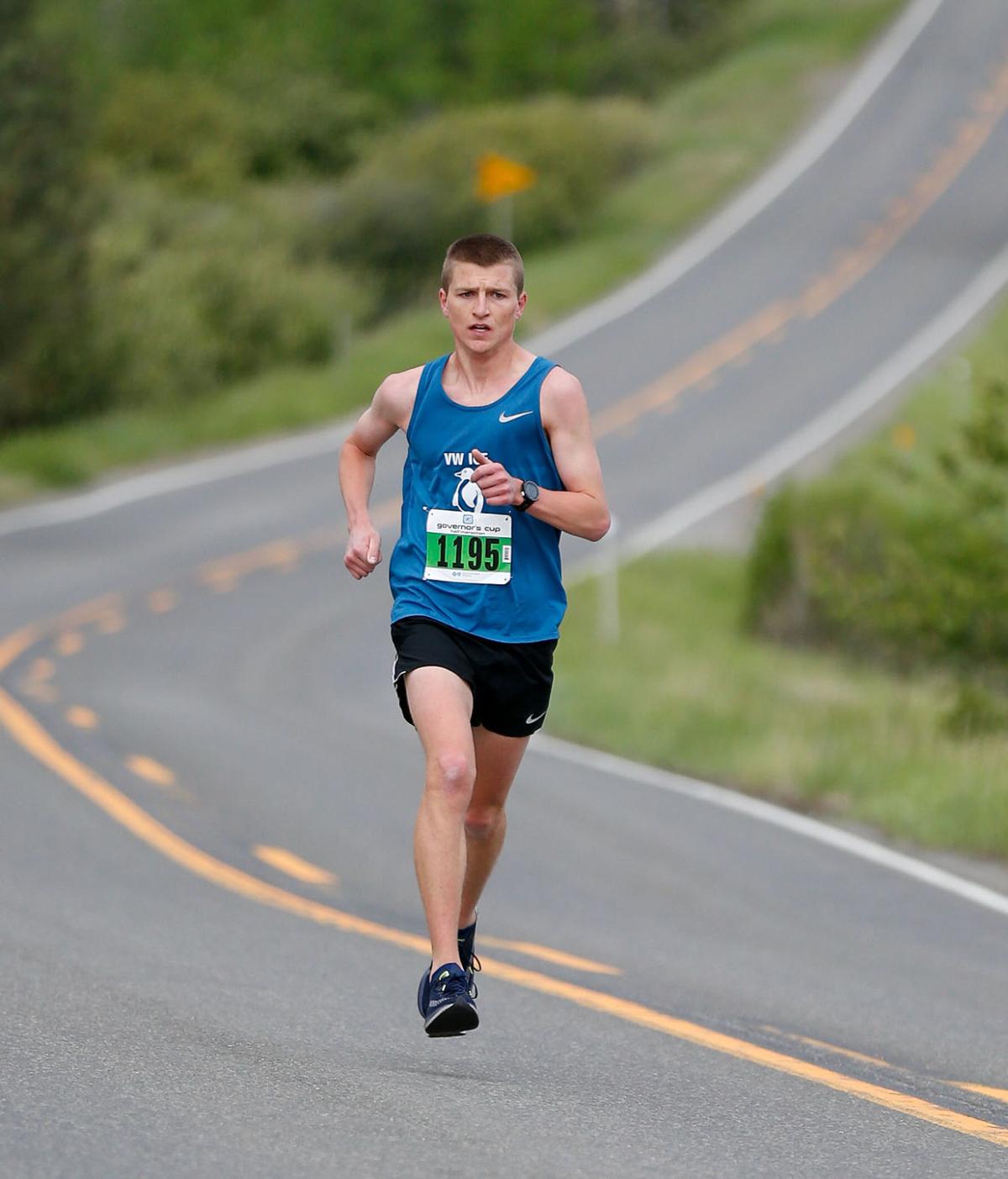 Mark Messmer of Missoula wins the 46th annual Governor's Cup half-marathon with a time of 1:07.48.49 Saturday morning in Helena.

MISSOULA — The bet started out not long after Missoula native Mark Messmer graduated from the University of Montana.

He and former college teammate Reid Longley decided to see who could run for the most consecutive days. Messmer says he won the bet after about 100 days but decided to continue running at least four miles a day no matter the weather. He prefers the snow to the cold rain and regularly found plowed areas alongside U.S. Highway 93 between Missoula and Lolo, although he sometimes fell on snow or ice but just popped back up.

The Missoula Sentinel grad wanted to make it one full year running every day but kept going when he completed his personal challenge. Messmer then thought he’d end it if he qualified for the 2020 Olympic Trials, but he decided to power along. And he couldn’t bring himself to stop the streak after the Trials concluded six weeks ago, still reaching at least 100 miles per week.

Fortunately, running is an individual activity he can do while social distancing, meaning even the coronavirus pandemic hasn’t halted him. So when he completed his self-described “easy” 12 miles on Tuesday morning, it marked the 1,226th consecutive day he’s ran since the bet began on Dec. 6, 2016, a streak that eclipsed 1,200 during the pandemic.

“It’s pretty stupid. I don’t know why I’m still doing it,” Messmer joked before turning semi-serious. “I would say it’s pretty much for the enjoyment. And because I’m kind of crazy. I don’t know what it’s going to take to end it. Probably if I get really sick or really injured.”

Messmer kept that streak going despite lowering his mileage as he recovered from his most recent competition at the U.S. Olympic Trials on Feb. 29 in Atlanta, where the top three male and female finishers qualified for the Olympics. The race didn’t go entirely as he envisioned. He aimed to finish in the top 100 after qualifying just two months before the race but ended up in 110th place while navigating the rolling hills, “brutal” winds and about 1,400 feet in elevation gain throughout the race.

Messmer took away some positives from his first time qualifying for the event, which was just his 10th marathon overall. He showed he was good enough to run alongside some former Big Sky Conference track runners who he felt he was nowhere close to in college as a walk-on.

Messmer also saw how he could still have a long future in running because the third-place finisher in Atlanta was 43 years old. He was only 27 and ran the race in 2:25:53, finishing 16:33 behind the winner and believing his refusal to take a day off is why he's continued to lower his times.

That all provided him with some more motivation to continue running during the pandemic, which has caused him and many competitive runners to be unsure of when their next race could be. It may be weeks, or it could be months.

“I’m still not convinced that I’ve reached my peak,” said Messmer, who works as a sales associate at Plateau Runner, a sporting goods store serving the running community in Issaquah, Washington, where he moved to from Missoula this past September.

“I never would have dreamed when I was in high school or college that I would have had the opportunity to run in the Olympic Trials. Even two years ago, I never would have truly thought that. I don’t know what I can do and what I can accomplish, but I want to keep pushing myself and hopefully keep testing the limits and achieve a little bit more than what I already have.”

Messmer first thought it would be possible to qualify for the Olympic Trials when he won the 2018 Missoula Marathon. He’s also continuing to train in hopes that the 2020 race will be run on June 28. He’s the two-time defending champion and holds the second-fastest time in the 13-year history of the race.

There’s also an opportunity that he could try to qualify for the Olympics through track and field, but he’d have to first qualify for those June 2019 Trials, likely in the 10K. He did run four years of track at UM in addition to three years of cross country, but he hasn’t run a 10K since graduating in 2015 and hasn’t trained with a focus on the speed needed for it, working instead on endurance.

“I guess anything is possible, but I don’t really see myself shooting for that,” Messmer said. “I think I’ll probably continue to focus on marathons and do some half marathons and just see if I can keep dropping my time.”

He already has an eye on the 2024 Olympics, which will be held in Paris. It’s still well over a year before he can even try to qualify for those Olympic Trials, giving him plenty of time to continuing training — and building upon his daily running streak.

“If I’m fortunate enough to stay healthy and keep doing this, that’ll be a goal of mine is to get back and improve on my place from this last finish,” Messmer said. “You never know what can happen, so just keep chugging along.”

Mark Messmer of Missoula wins the 46th annual Governor's Cup half-marathon with a time of 1:07.48.49 Saturday morning in Helena.