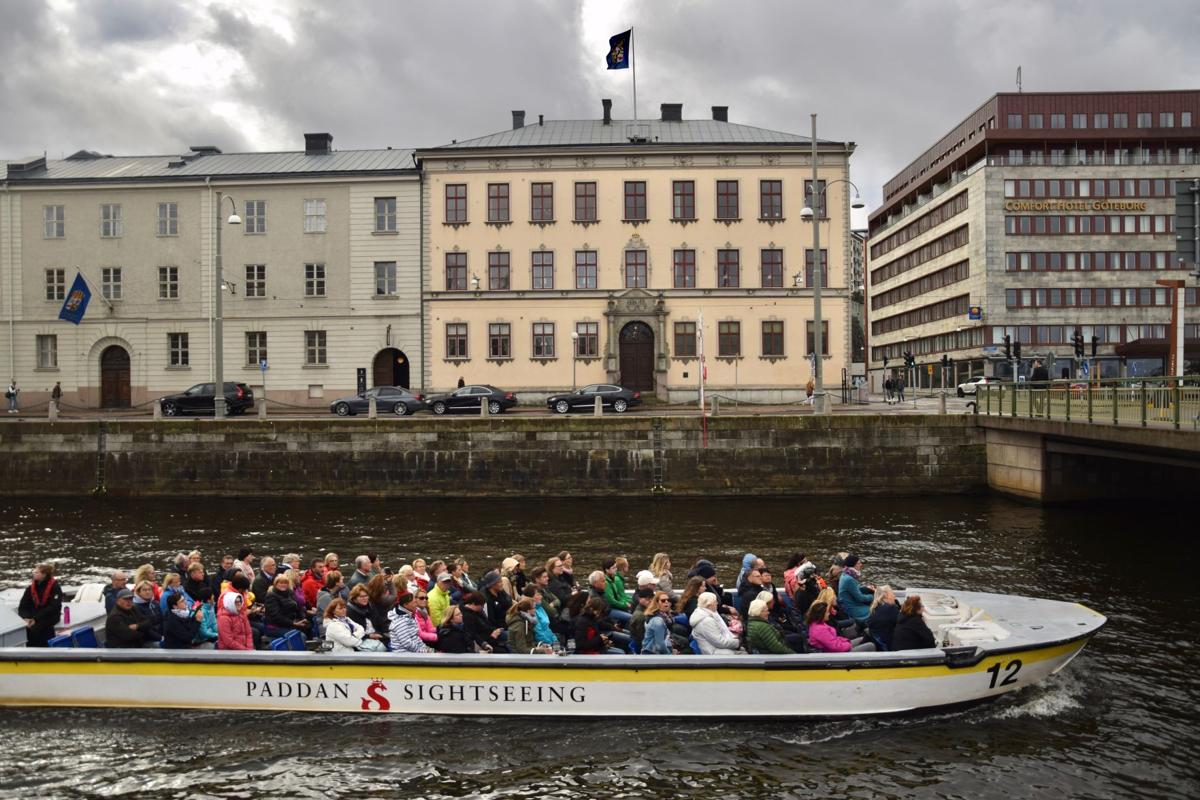 Sweden's second largest city, Gothenburg, was the main port of departure for emigrants who flocked to America between 1850 and 1930. (Mark Johanson/Chicago Tribune/TNS) 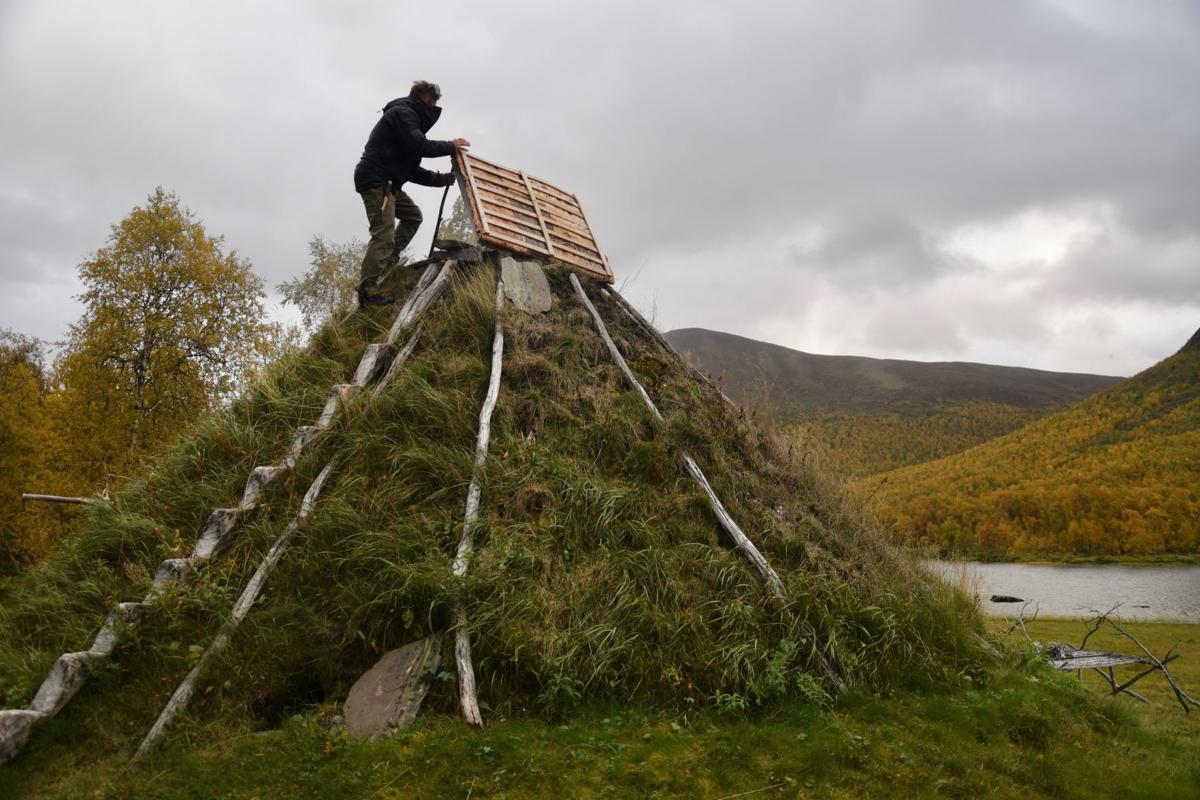 Mikael Vinka stands on top of a traditional goathie home at his Sami Ecolodge near Ammarnas, Sweden. (Mark Johanson/Chicago Tribune/TNS) 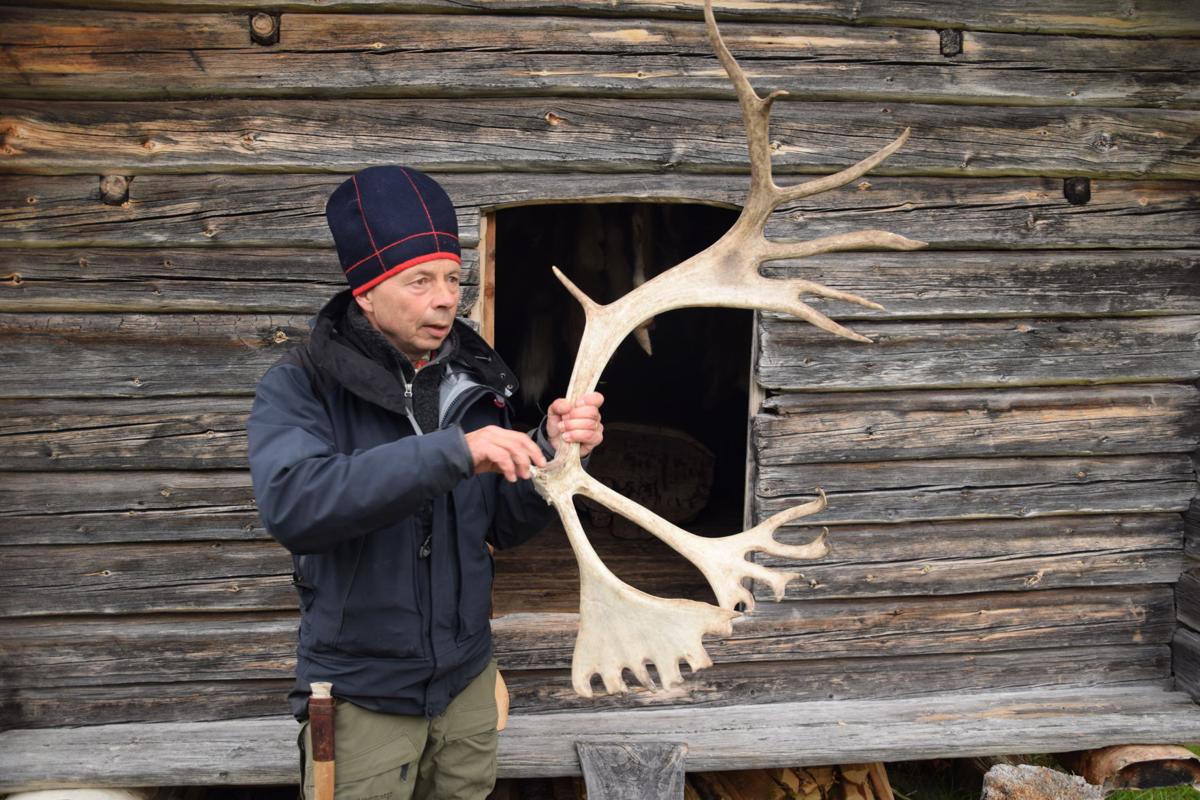 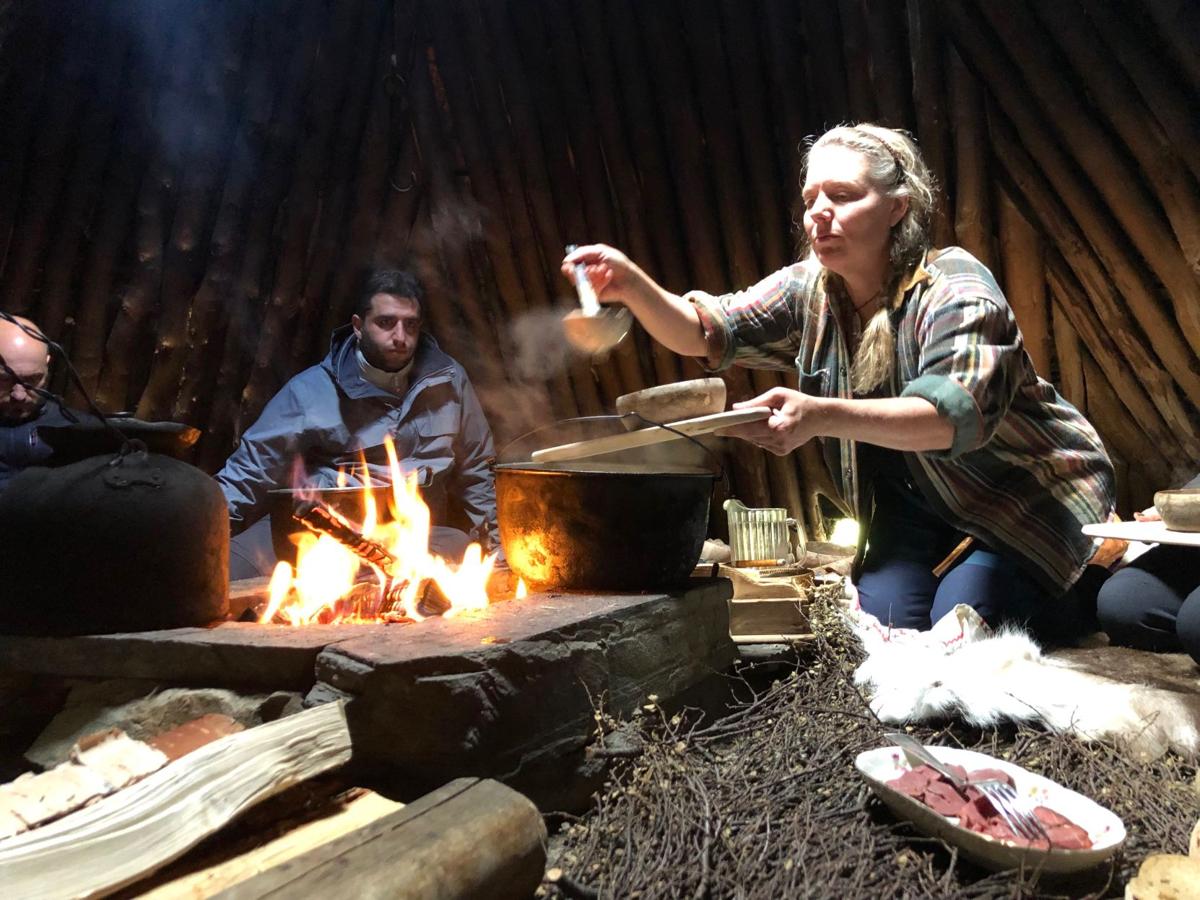 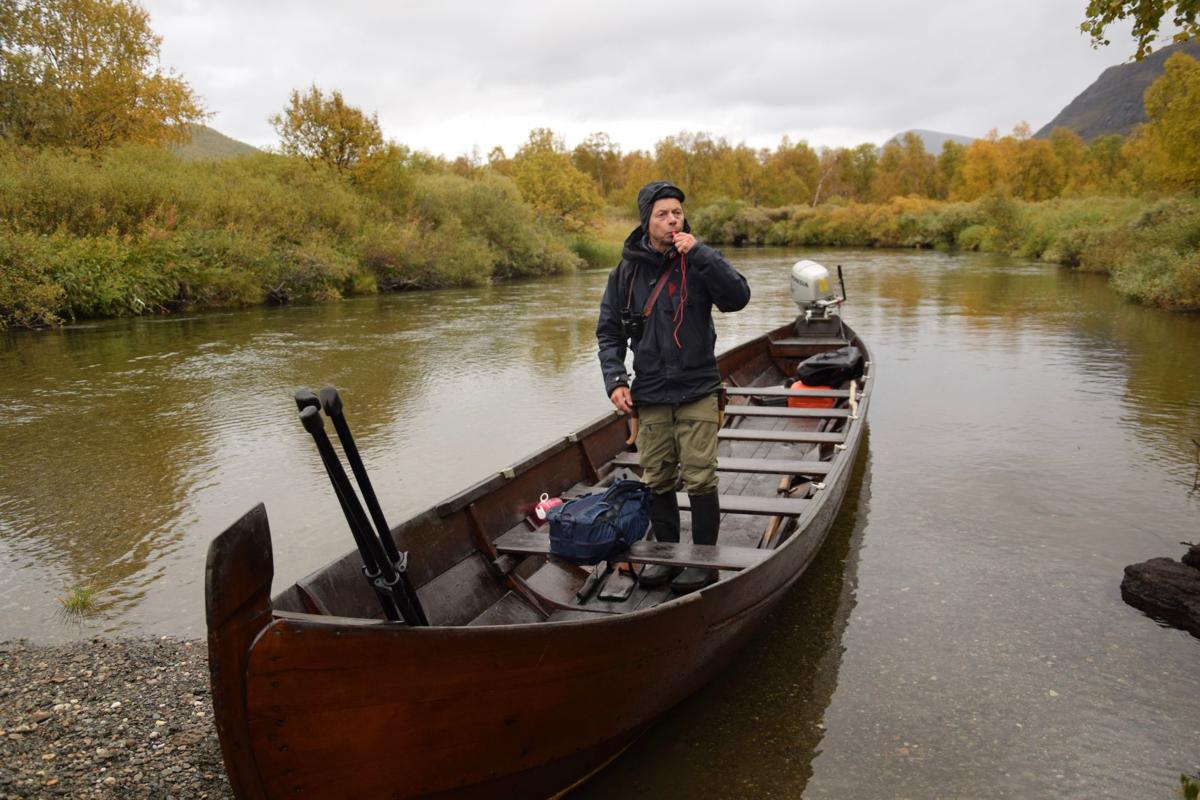 Mikael Vinka stands in his boat, which is the main way to access the remote Sami Ecolodge, which welcomes guests 12 times a year. Visitors can take a snowmobile in the winter. (Mark Johanson/Chicago Tribune/TNS) 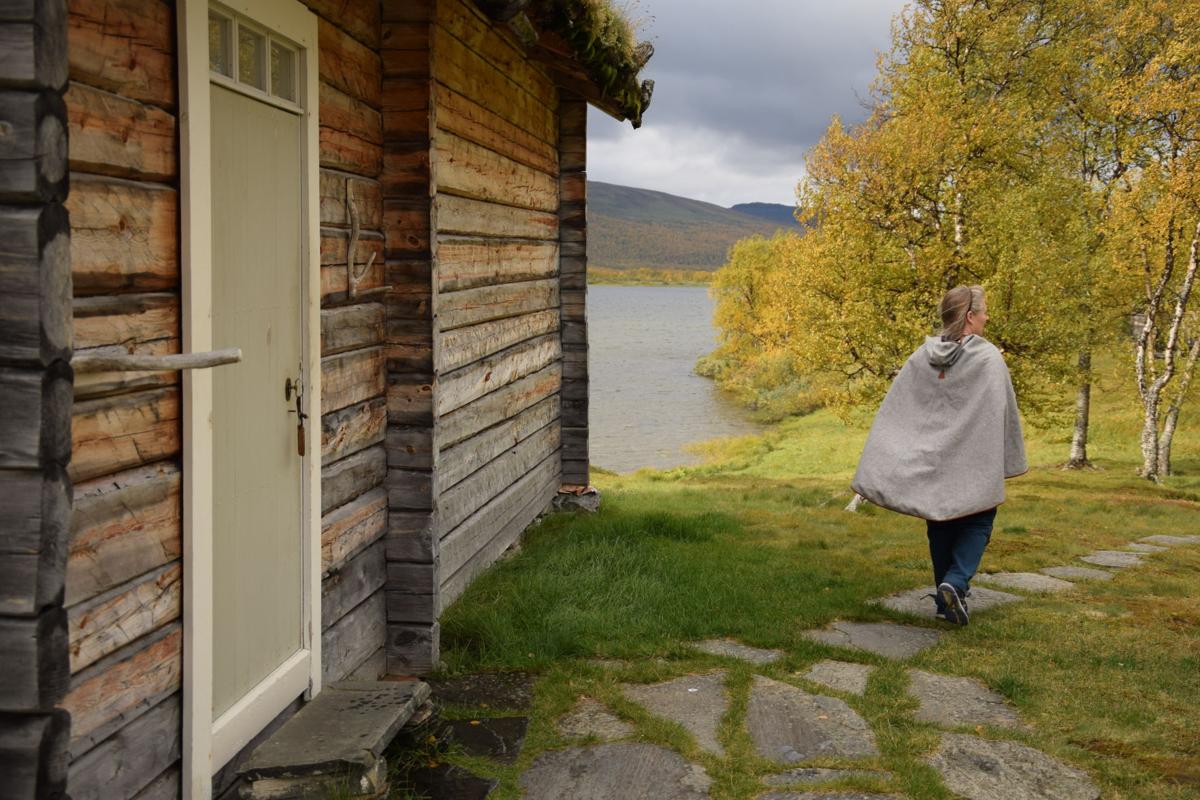 Anki Vinka runs the Sami Ecolodge alongside her husband, Mikael. While kerosene lamps are used at the secluded lodging, electricity and running water are not available. (Mark Johanson/Chicago Tribune/TNS)

Smoke billowed out of a hole at the center of a grass-covered tepee as I passed plates of cured moose sausage, flat bread, cheese and cloudberry jam to the seven other strangers gathered in this traditional Sami home in Sweden's northernmost Lapland region.

This was a complete digital detox: no electricity, cell signal or running water. Outside the conical dwelling (called a goathie in the indigenous Sami language), the air threatened to dip below freezing. Yet, with my toes curled into a reindeer pelt and the central fire invoking another round of storytelling, none of the modern sacrifices seemed to matter.

Owner Mikael Vinka regaled us with stories of herding his reindeer across the snow-dusted forests that blanket Sweden's Arctic frontier - a region the Sami call Sapmi. Over the next three days, he led us hiking into the birch-topped Vindel Mountains. We dared our bodies to enter a frigid lake before defrosting them in a fire-heated sauna. At night, we chased the faint chartreuse glow of the northern lights across an untainted sky.

When, on the final day, Mikael urged us to sit on a mossy mound and feel the energy of the earth, the cynic in me wanted to crack. But I couldn't. Mikael had spoken of Lapland with such doe-eyed sincerity. He connected so deeply with his environment that he could disappear into it for days. I wanted that kind of unburdened freedom. I needed to feel what he felt too.

To reach the Vinka family's Sami Ecolodge meant a four-hour drive from the regional airport in Lulea to the hamlet of Ammarnas, followed by a 45-minute boat ride into the vast wilderness of Vindelfjallen Nature Reserve, one of the largest protected areas in Europe. I came all this way not only to purge myself from the trappings of cellphones, social media, work and city noise, but also to embark on a spiritual journey to try to discover who I am at my core.

Like an increasing number of Americans, I've become curious about my heritage. How (if at all) has it molded me into the person I've become? Results from one of those ubiquitous DNA kits suggest the highest percentage of my genetic code is from Sweden, so it felt like as good a place as any to begin.

I split my journey into three parts, each with a distinct objective. First I'd explore the geography - Sweden's famous wildlands - with those who maintain the deepest connection to them in the 21st century: the Sami. Then I'd head south to uncover the history of my great grandfather's journey to America in the seaport of Gothenburg. Finally, I'd connect with the people - specifically a few distant relatives - to see what of the national character I could find lingering in myself.

My stay in the far north taught me that woodlands and rivers and overgrown ravines are not just feral spots on an ever-busier map; they're our link to sanity, a global necessity and a Swedish birthright given to those lucky enough to live in a nation where 69% of the land is forested.

For the next stage of my journey - the history leg - I had to leave the musky dew of Lapland behind for the salty air of southerly Gothenburg.

It was from this industrial seaport along the rocky Bohuslan Coast that most of the 1.3 million Swedes who departed for a new life in America between 1850 and 1930 took their final steps on Swedish soil. After checking in at New York's Castle Garden (from 1855) or Ellis Island (from 1892), the majority settled in Chicago, Minneapolis and the greater Midwest, where the landscape and climate resembled home.

Swedes make up a tiny fabric of the American quilt, but this mass exodus of nearly 25% of the population left a big mark on Sweden. To learn more, I visited the House of Emigrants, a small museum in the city's old Customs House (now a casino), from which nearly all Swedish emigrants passed.

The museum looks at the reasons Swedes emigrated to America, the ship lines that took them there and what they left behind. In my great-grandfather Carl Johansson's case, it was a shot at a better life, the White Star Line (1911), and everything he knew and loved - along with the extra "s" in his surname, discarded for simplicity's sake in his adopted homeland.

So important was this mass emigration to Sweden's history that one of its most popular reality TV shows, "The Great Swedish Adventure" ("Allt for Sverige"), invites Americans with Swedish ancestry to come back and discover their roots. Like any good show, however, there's a catch: Along the way, cast members are kicked off for losing cultural and physical challenges. Only the winner meets their Swedish relatives for a family reunion.

I saved myself the humiliation of losing a Swedish reality show by contacting the descendants of Carl's sister, Gerda, directly.

Gerda's great-granddaughter, Camilla Sandell, lives in a lovingly restored falu red cottage in the countryside just outside Gothenburg. When she heard I'd be in town, she bought loads of crustaceans from a local fisherman, set a table with white wine and nutty Vasterbotten cheese, and invited the extended family for a crayfish party - a feast typical of Sweden's West Coast, where the critters run wild.

It's a strange thing to meet a family who shares some of your bloodlines but grew up in another land, speaks a different language and has its own customs. Yet it's equally bizarre how little that seems to matter by the second glass of wine. In fact, it struck me sitting at that dinner table with 10 Swedes that my preference for deference, for humility, for having enough of a personality but not too much to cause a scene makes me rather Swedish at my core.

My parents had visited some of these relatives in Sweden a decade prior. They put together a genealogy-inspired DVD for me and my siblings and gave it to us for Christmas. To say I was mildly intrigued would be generous.

I've spent most of my adult life traveling the globe for work, but never once put Sweden on the agenda. I can't say why. As a kid, the mere fact of having the most popular last name in Sweden was enough for me to cheer for their soccer team in World Cups and study the country for geography projects. It was always the most tangible connection I had to somewhere else.

But to visit? Perhaps it wasn't exotic enough. I've always been attracted to everything wholly foreign, so it was quite a surprise to find during my two weeks in Sweden that something startlingly familiar, something in my DNA, could shock my senses even more.

When all the crayfish were decapitated and wine bottles emptied, Camilla reached into her closet for a box. Inside was a black top hat, the kind you might see in period movies, from another shared relative named Axel Johansson. The newspapers protecting it were from the 1940s. Despite my protests, she wanted me to have it.

There's an old Swedish fable about a hat that takes on a new life with each person who wears it. If I brought my long dead relative's hat back home with me, Camilla said, I would not only have something to remember them by, but the hat could have a new story.

(Mark Johanson is a freelance writer.)

Try these tips to get great travel photos

Family travel five: Why it's important to travel with family

We can all be grateful for the opportunity to travel. Here are five reminders of why exploring the world with our family matters.

Family travel five: Check out these US civil rights landmarks

Smile: It's a family photo!

How much money was left in TSA bins? Probably more than you think

Loose change. When travelers reach airport gates, it is placed in a basket along with other items from a passenger’s pocket. However, it is no…