Navigating hotel rewards programs can be a daunting task. From point-earning promotions to elite status upgrades and thousands of other factors, it’s easy to feel overwhelmed. Yet, for most travelers, it all boils down to two simple variables:

That is, if you earn one point per dollar spent at a hotel, and each point is worth one cent, you’re earning one cent per dollar (1%) in rewards. Boiling it down to this single number lets us directly compare hotel rewards programs to one another and determine which ones offer the best — and worst — value.

Don’t fret if this is starting to feel like a stress-dream math problem. Our team at NerdWallet crunched the numbers to identify which hotel loyalty programs actually offer the best bang for your travel buck.

We collected and compared hundreds of real-world room rates to determine the value of each hotel brand's rewards points, then calculated the rewards rate (that is to say, the rate of rewards you earn per dollar spent) for each program. This rate can help you determine the best hotel rewards programs. It also gave us a new way to think about which hotel provides the best loyalty program in 2022.

Using data to determine these rankings means that we never know how they are going to shake out until the final spreadsheet is tabulated. That means the final results are as much a surprise to us as they are to anyone. 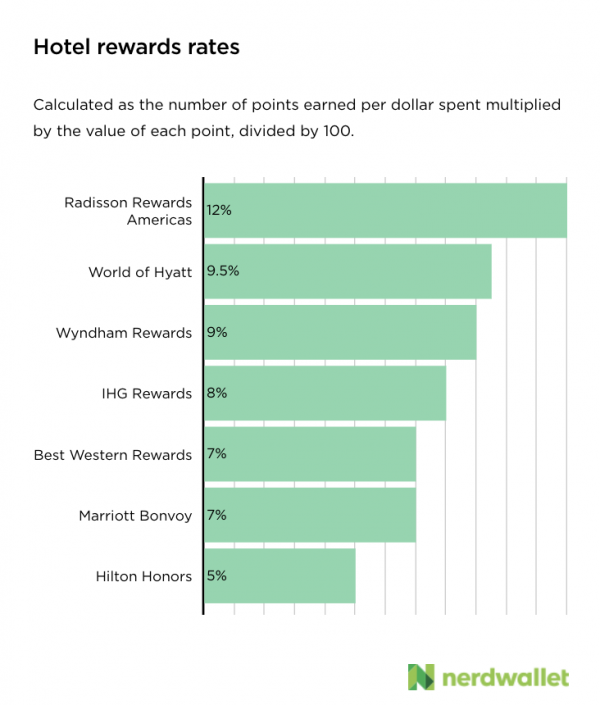 Of course, there are other important factors to consider when choosing a hotel and its rewards program, such as elite status perks and the quality of the hotels. But our rewards rate gives a simple snapshot of which hotel brands are actually offering good value on their core rewards product: points.

A closer look at the most valuable program

Why did Radisson Rewards do so well this year? A few reasons. Radisson offers a whopping 20 points per dollar spent at most U.S. properties, far more than any competitor. In the past, Radisson’s generous point-doling was counterbalanced by low point values, but this value bounced up this year, from 0.3 cent per point in 2020 to 0.6 cent per point in 2021.

This is far from a stellar value per point in its own right compared with, for example, World of Hyatt’s 1.9 cents per point value.

Yet the whole point of this analysis isn't which hotel program offers the highest value currency, but which offers the best combination of high-value currency and generous awarding of that currency.

One important note: Radisson Rewards recently split its program between its hotels in the Americas and elsewhere around the globe. This analysis applies to its Americas program only.

The rankings above apply to earning and using points in the traditional way — on hotel spending. But what if you’re considering a points promotion or a credit card offer that involves a lump sum of points? For example, choosing between a promotion that earns 100,000 Hyatt points or 100,000 Marriott points.

Our regularly updated point and mile valuations show how the raw value of these currencies vary.

The values of hotel points differ significantly, which means you should pay close attention to the real value of any promotion by multiplying the above cent-per-point values by however many you’re expecting to earn.

This is just like any currency; $150,000 is very different from £150,000. And earning Hyatt points is far more valuable than earning the same number of Marriott points.

This can all be a lot to keep track of, especially if you’re new to the points and miles hobby. Here’s the gist:

These rewards values aren’t the only thing to consider when choosing a hotel loyalty program, but they’re a good start. The numbers show that programs like Radisson and Hyatt are willing to put their money — or at least their points — where their mouths are.

The article Here Are the Most Valuable Hotel Rewards Programs in 2022 originally appeared on NerdWallet.

Grammar police! Are you using 'to whom' wrong?

Taking the kids: How to have a safe and sane family vacation this winter

Is a family vacation worth it this winter? For once, I’m not talking about how much it would cost or the hassle factor.

Which Airline Rewards Program Gives the Most Value?

Airline rewards programs are complicated. It might seem like you need a Ph.D. in complex systems (or at least fine-print reading) to understand them. But underneath the complex gobbledygook lies…

The world's most powerful passports for 2022

There's a widening gap between the global north and the global south when it comes to travel freedoms, says the first 2022 report by London-based global citizenship and residence advisory firm Henley & Partners.

Need inspiration for our 2022 Destinations Photo Contest? We have you covered.

Why January is the best month to book travel

It’s the New Year, and with it come new sales and greater opportunities to save money on this year’s travel experiences.

Visit any national park for free on these dates in 2022

This upcoming year will have five free days when admission is waived for every park that usually requires payment.

Historic, trendy and vibrant, Turkey ever a land of plenty

As a world traveler, I had put one destination on hold until three things aligned: finances, timing and motivation.

How to Think About Airline Elite Status in 2022

After two full years of disrupted travel, it seems like the industry could finally return to something like normalcy. Maybe. Perhaps. According to a report by the World Travel &…

Half of Travelers Have the Same New Year’s Resolution

As another year greets us, people around the world have started finessing their New Year’s resolutions. Here’s one surprising resolution, reported by an AmEx Trendex travel trends poll conducted in…