When lockdowns started in March 2020, Steve Schneiter lost all his revenue. Schneiter is the owner of Denver Microbrew Tour, a company that gives guided brewery tours. Considering both travel and indoor dining was at a standstill, Schneiter had few avenues to maintain his business.

To stay occupied, he set a goal to run one mile every day throughout lockdown, which he expected to last eight weeks. But as lockdowns persisted, Schneiter — who hadn’t run more than a half marathon pre-pandemic — organized a socially distant relay race where up to 10 people split a 50-kilometer run.

By November, Schneiter was itching to escape Colorado, so he planned a road trip to Moab, Utah — chosen in part for another race. This course was also 50 kilometers, but the difference here was rather than split it among friends, he’d run it all himself.

From there, active vacations became his new, pandemic-fueled modus operandi. He’s since done multiple running vacations, including a trip where his wife drove their converted 1996 Bluebird Bus to a different campsite every night and he’d run to meet her. 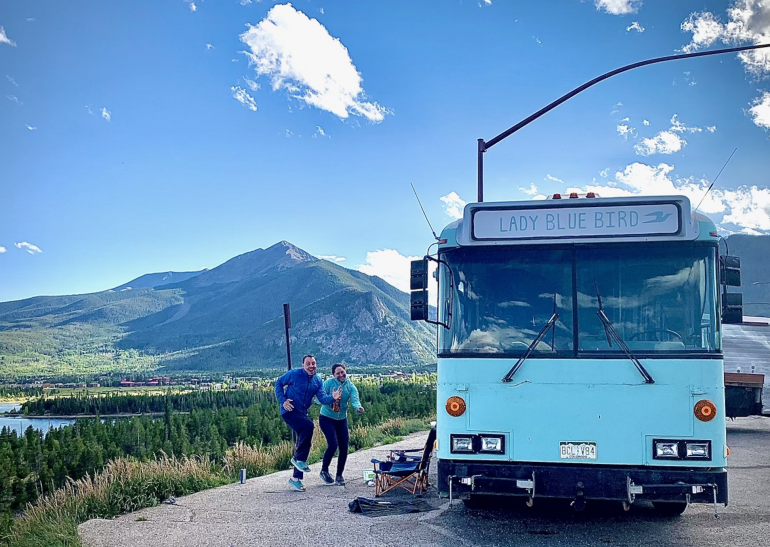 Steve and Carly Schneiter outside their converted bus. (Photo courtesy of Steve Schneiter)

The rise in active vacations

Schneiter might be unique in finding a 50-kilometer run relaxing, but his newfound preference for active vacations is far from singular. After more than a year stuck at home and (for some) gaining the “COVID-15” pounds, travel companies have witnessed increased interest in active vacations.

These trips shed the typical stops at museums and theaters, instead embracing physical activity while simultaneously avoiding large crowds. There are active vacations for nearly any sport and activity level. You might hike a mountain range, scuba dive off the coast of a remote island or bike through vineyards and farmland.

Some travelers organize their own active trips — planning their own hikes, bike rental stops and lodging — as Schneiter did. Others might travel through a tour company that handles renting sports equipment, planning meals and booking hotels for you.

Despite the fact that overall rates of travel are still far below pre-pandemic levels, many tour companies marketing active trips are seeing huge interest.

Country Walkers, a company that offers both self-guided and group hiking tours throughout the U.S. and abroad, told NerdWallet that bookings for its South America itineraries, which include a trek to Machu Picchu, have increased 170% compared with 2019.

“We hear feedback from guests that they’re excited to be out biking or hiking and not spending time in museums or other crowded places right now,” says Laura Breen, who leads sales for Country Walkers and its sibling brand, VBT Bicycling Vacations. “Some guests are doing two trips or even three trips to make up for lost time in 2020.”

An increasing focus on U.S. travel

Active vacations have long lured U.S. travelers who want to test their skills trekking or cycling in places like Everest Base Camp or Vietnam’s Hải Vân Pass — a highlight of the six-day bike tour offered by cycling company Spiceroads.

Yet with ongoing border restrictions and ever-changing safety rules, many travelers have opted to stay closer to home.

Tour companies have shifted their itineraries to be in line with customer preferences. REI Co-op, which has run guided backpacking, cycling and camping tours around the world, announced this year that it would discontinue its international trips to invest in domestic travel.

And the strategy is paying off. According to REI, it now runs more than 100 itineraries across the U.S., and as of March, sales of its domestic trips were up 28% compared with 2019.

What do active vacations cost?

The trouble with staying domestic: often significantly higher costs. Thailand-based Spiceroads offers tours primarily in Southeast Asia that start at less than $100 for a two-day trip. Its seven-day trip along Vietnam’s coast costs $1,400 including lodging, a rental bike and a support vehicle.

Contrast that with the domestic trips: California-based Backroads offers similar cycling trips as Spiceroads, but at a premium price tag. Its $4,000, five-day bike tour of Nantucket Island will lead you to the outdoor heated pool in front of your private cabana at the luxury White Elephant resort.

And sure, you’ll burn calories, but many of the fanciest trips emphasize food, too. Cycling tour company DuVine carved a niche in trips through vineyards. Naturally, it includes gourmet meals paired with local wines, such as a $6,600, 5-day trip through California’s wine country with two Michelin-star dinners.

Some domestic travelers avoid high costs by planning trips themselves, though that requires more research and the burden of navigating unfamiliar trails on your own.

The internet can make it easy to plan active vacations on the cheap. Dirt In My Shoes, a national park-focused website run by a former park ranger, sells digital itineraries for less than $10. Sites like Strava and AllTrails have thrived due to user-generated reviews and maps, which provide tips for routes to take. Both sites offer free versions and low-cost subscription upgrades.

Getting out of the house and staying more active is surely a welcome trend now more than ever, as the Centers for Disease Control and Prevention reports that obesity may triple the risk of hospitalization due to COVID-19 infection.

But an increase in active vacationers is not without its challenges. National parks saw record numbers of visitors in 2021, leading to long lines and the need for reservations just to get in — hardly the socially distant, peaceful vacation some imagined.

Those high figures have also led to an uptick in people needing rescue. The National Park Service said that in September 2020, rangers responded to 37 helicopter medical evacuations in the Grand Canyon. That one month is nearly a quarter of the 164 helicopter evacuations done in all of 2018. The Park Service spends about $5 million annually rescuing visitors in the Grand Canyon.

“Many of these emergencies could have been prevented by hikers planning ahead, knowing their own physical abilities and choosing appropriate hiking distances,” according to a statement from the National Park Service.

But for most, active vacations have provided much-needed physical and mental health benefits.

“One of my favorite things is just getting up early in the morning to go on a run, catching the time of day as the sun is rising,” Schneiter says. “It helps me start the day feeling great. It invigorates me.”

The article This Growing 2022 Vacation Trend Could Make You Fitter originally appeared on NerdWallet.

How to get your garden ready for winter

How to get your garden ready for winter

Need a break from the computer screen? It's time to 'deskercise'

Need a break from the computer screen? It's time to 'deskercise'

From hibiscus to yuzu, the foods set to trend in 2022

From hibiscus to yuzu, the foods set to trend in 2022

Stay dry with these waterfall photos from our Destinations Photo Contest

Check out these photos from people who did chase waterfalls.

What COVID Test Is Required for Travel?

So you’re looking to get back into traveling — but things have changed since the last time you hopped on a plane. From new testing requirements to quarantine concerns, the…

As summer fades, check out these beach photos from our Destinations Photo Contest

Soak up the sun with these beach photos from our Destinations Photo Contest.

En route to Dachau’s infamous concentration camp, I sit next to an old German woman on the city bus. I smile at her weakly as if to say, “I don’t hold your people’s genocidal atrocities against you.”

Go away with … Misty Copeland

Born in Kansas City, Missouri, and raised in San Pedro, California, Misty Copeland understands her role as a trailblazer in the classical dance world. She is the first Black female principal dancer with the American Ballet Theatre. That’s one reason why the New York Times bestselling author decided to write “Black Ballerinas: My Journey to Our Legacy” (Aladdin, $19.99), a children’s book that releases on November 2 (https://mistycopeland.com/store/). Copeland is already at work on her next book, which will be about the late ballerina, Raven Wilkinson, who was allowed to perform with the Ballet Russe de Monte Carlo, under the condition that she present herself as a white woman.