Six months ago, negotiators at the United Nations’ Glasgow climate summit celebrated a series of new commitments to lower global greenhouse gas emissions and build resilience to the impacts of climate change. Analysts concluded that the new promises, including phasing out coal, would bend the global warming trajectory, though still fall short of the Paris climate agreement.

Today, the world looks ever more complex. Russia is waging a war on European soil, with global implications for energy and food supplies. Some leaders who a few months ago were vowing to phase out fossil fuels are now encouraging fossil fuel companies to ramp up production.

In the U.S., the Biden administration has struggled to get its promised actions through Congress. Last-ditch efforts have been underway to salvage some kind of climate and energy bill from the abandoned Build Back Better plan. Without it, U.S. commitments to reduce emissions by over 50% by 2030 look fanciful, and the rest of the world knows it — adding another blow to U.S. credibility overseas.

Meanwhile, severe famines have hit Yemen and the Horn of Africa. Extreme heat has been threatening lives across India and Pakistan. Australia faced historic flooding, and the Southwestern U.S. can’t keep up with the wildfires.

As a former senior U.N. official, I’ve been involved in international climate negotiations for several years. At the halfway point of this year’s climate negotiations, with the next U.N. climate conference in November 2022, here are three areas to watch for progress and cooperation in a world full of danger and division.

Russia’s invasion of Ukraine has added to a triple whammy of food price, fuel price and inflationary spikes in a global economy still struggling to emerge from the pandemic.

But Russia’s aggression has also forced Europe and others to move away from dependence on Russian oil, gas and coal. The G7 — Canada, France, Germany, Italy, Japan, the U.K. and the U.S. — pledged on May 8, 2022, to phase out or ban Russian oil and accelerate their shifts to clean energy.

In the short term, Europe’s pivot means much more energy efficiency — the International Energy Agency estimates that the European Union can save 15%-20% of energy demand with efficiency measures. It also means importing oil and gas from elsewhere.

In the medium term, the answer lies in ramping up renewable energy. 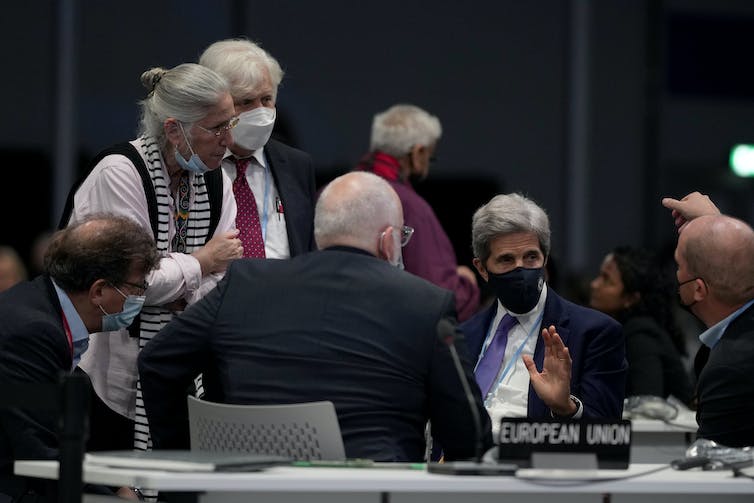 There are issues to solve. As Europe buys up gas from other places, it risks reducing gas supplies relied on by other countries, and forcing some of those countries to return to coal, a more carbon-intense fuel that destroys air quality. Some countries will need help expanding renewable energy and stabilizing energy prices to avoid a backlash to pro-climate policies.

As the West races to renewables, it will also need to secure a supply chain for critical minerals and metals necessary for batteries and renewable energy technology, including replacing an overdependence on China with multiple supply sources.

Finance leaders and other private sector coalitions made headline-grabbing commitments at the Glasgow climate conference in November 2021. They promised to accelerate their transitions to net-zero emissions by 2050, and some firms and financiers were specific about ending financing for coal plants that don’t capture and store their carbon, cutting methane emissions and supporting ending deforestation.

Their promises faced cries of “greenwash” from many climate advocacy groups. Some efforts are now underway to hold companies, as well as countries, to their commitments.

A U.N. group chaired by former Canadian Environment Minister Catherine McKenna is now working on a framework to hold companies, cities, states and banks to account when they claim to have “net-zero” emissions. This is designed to ensure that companies that pledged last year to meet net-zero now say how, and on what scientific basis.

For many companies, especially those with large emissions footprints, part of their commitment to get to net-zero includes buying carbon offsets — often investments in nature — to balance the ledger. This summer, two efforts to put guardrails around voluntary carbon markets are expected to issue their first sets of guidance for issuers of carbon credits and for firms that want to use voluntary carbon markets to fulfill their net-zero claims. The goal is to ensure carbon markets reduce emissions and provide a steady stream of revenue for parts of the world that need finance for their green growth.

Climate change is now an increasingly important factor in elections.

French President Emmanuel Macron, trying to woo supporters of a candidate to his left and energize young voters, made more dramatic climate pledges, vowing to be “the first major nation to abandon gas, oil and coal.”

With Chile’s swing to the left, the country’s redrafted constitution will incorporate climate stewardship. 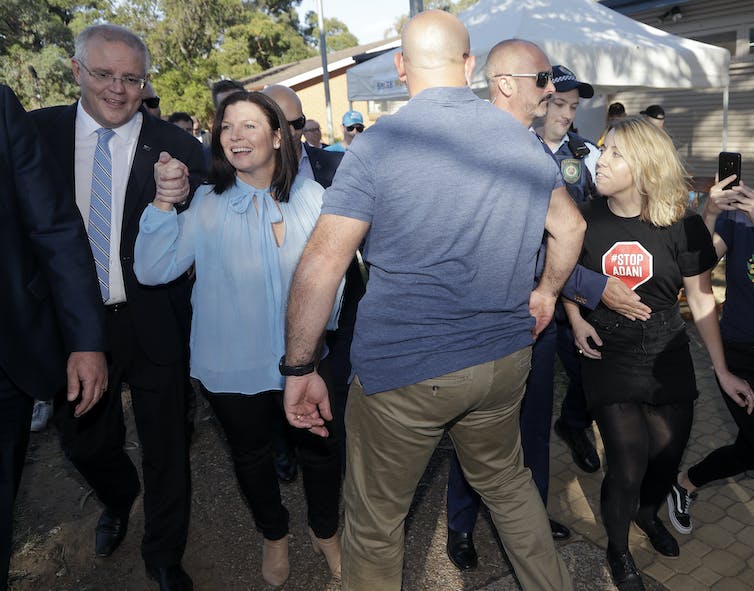 Australian Prime Minister Scott Morrison (left) has faced protests over his support for the Adani Carmichael mine, one of the largest coal mines in the world. AP Photo/Rick Rycroft

In Australia, Scott Morrison’s government — which supported opening one of the world’s largest coal mines at the same time the Australian private sector is focusing on renewable energy — faces an election on May 21, 2022, with heatwaves and extreme flooding fresh in voters’ minds. Brazil’s Jair Bolsonaro faces opponents in October who are talking about protecting the climate.

Elections are fought and won on pocketbook issues, and energy prices are high and inflation is taking hold. But voters around the world are also experiencing the effects of climate change firsthand and are increasingly concerned.

The next climate conference

Countries will be facing a different set of economic and security challenges when the next round of U.N. talks begins in November in Sharm el-Sheikh, Egypt, compared to the challenges they faced in Glasgow. They will be expected to show progress on their commitments while struggling for bandwidth, dealing with the climate emergency as an integral part of security, economic recovery and global health.

There is no time to push climate action out into the future. Every decimal point of warming avoided is an opportunity for better health, more prosperity and better security.

Rachel Kyte is a member of the U.N. secretary-general’s high-level advisory group on climate action and co-chair of the Voluntary Carbon Markets Integrity Initiative.

This article is republished from The Conversation under a Creative Commons license.

Don't shower during a thunderstorm. Here's why

Lightning can travel through plumbing, so don't shower or wash hands or dishes during a thunderstorm. That's what the CDC advises.

Hurricane hunters flying in Ian's strong winds: Here's what happens when plane is in storm's eye

Scientists on planes flying through Hurricane Ian's center are taking measurements satellites can’t and sending them to hurricane forecasters.

America’s summer of heat, floods and climate change: Welcome to the new abnormal

Millions around the world suffered through long heat waves and deadly flash floods. But this isn’t a freak summer: It's occurring much more often.

Here's why tropical storms have names

The system as we know it didn't begin until 1953, when the United States started using female names for tropical storms.

Ask the Weather Guys: What happens to hurricanes in the mid-latitudes?

Hurricanes do find their way to the mid-latitudes with regularity, especially in the western Pacific Ocean basin.